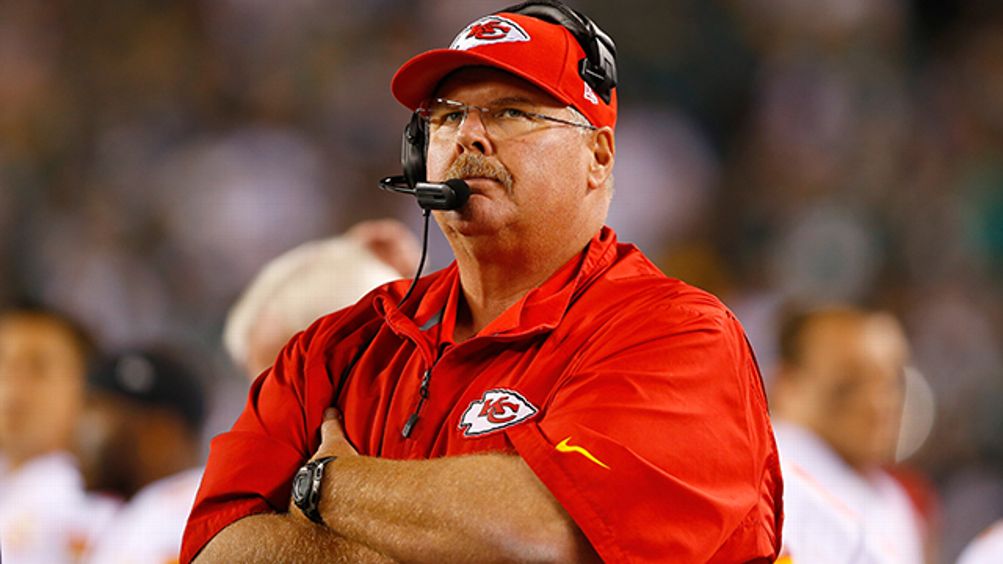 As it turns out, slowing down the most-hyped offense in the NFL is actually pretty easy. Just take the two best defensive players in football through two and a half weeks, let them wreak havoc, and never give that offense the ball back. This football stuff is easy! The Chiefs didn’t reveal a blueprint for stopping Michael Vick and beating the Eagles 26-16 last night, because other teams can’t replicate what the Chiefs can do defensively. And the Chiefs are a scary team that nobody is going to want to play all season for that same reason.

All of which is to say this: Give them a break, Justin Houston! If you hadn’t been acquainted with the Chiefs pass-rusher before Thursday night, well, now you know. Houston doesn’t play for the Texans, but he filled up the stat sheet with a J.J. Wattesque performance, officially finishing with 4.5 sacks, three passes defensed, a forced fumble, and two fumbles recovered. Houston now has 7.5 sacks in his first three games, a figure nobody has matched or surpassed in 29 years. Only the Jets’ Mark Gastineau (eight) had more sacks in the first three games of a season (1984) than Houston has. Gastineau finished that year with 22 quarterback takedowns. That leaves Houston a target to hit.

We commonly think of Houston’s partner in crime on the Kansas City defense as Tamba Hali, his fellow outside linebacker and a great pass-rusher in his own right, but the other player who is off to a brilliant start this season is nose tackle Dontari Poe. Poe had a quiet day on the stat sheet after two mammoth games against the Jaguars and Cowboys, but he was meaningful against the Eagles by virtue of occupying the attention of their blockers up front. The Eagles were so terrified of Poe that they often had their tackles, Jason Peters and Lane Johnson, go one-on-one against Hali and Houston on the outside. That didn’t go so well.

In a way, what made that stuff work up front is what the Chiefs were doing behind their front seven. Kansas City has one of the most talented secondaries in the league, with a true no. 1 cornerback (Brandon Flowers)1 and a wildly skilled safety (Eric Berry) finally getting his confidence back after a torn ACL two years ago. It also added Sean Smith from the Dolphins this offseason, which was an incredibly underrated move that came at a bargain-basement rate for such a young player. That threesome allows the Chiefs to be very aggressive schematically; on Thursday night, they manned up right on the line of scrimmage against Philadelphia’s wideouts with a single high safety in Cover 1 and dared the Eagles to beat them downfield before their pass rush got home. The Chiefs used Berry and rangy inside linebacker Derrick Johnson to take away the quick pop passes and stick routes with tight ends that created easy reads for Vick. With the help that was left over, they shaded players to DeSean Jackson and made things very simple: For the Eagles to win, Riley Cooper and Jason Avant were going to have to beat single coverage. They didn’t.

The Chiefs might not have needed help to execute that game plan, but they certainly got some. Vick missed badly on a number of throws, including two interceptions on passes he definitely wants back. We saw a bit of the old Michael Vick tonight, both good and bad — Vick ran for 95 yards, but he also struggled to make it through his progressions and get the ball out to open receivers on time (in part because he likely feared the oncoming trains wearing red jerseys). The Eagles also gave the ball to the Chiefs with an early muffed punt and failed to recover three of their four fumbles on the day, including one early drive that was ended by a bizarre moment when Eagles center Jason Kelce thought Vick was under center as opposed to in the shotgun and snapped the ball to a poltergeist.2 It was a brutal show.

Alex Smith helped things along by holding on to the ball for two-thirds of the game. The Chiefs were in possession of the football for 39:07, and while time of possession is often an overrated statistic, it was part of the Kansas City game plan here. Smith, famously averse to turnovers and dangerous throws, made only one bad pass, a screen that was read by Connor Barwin and nearly taken to the house for a touchdown. The Eagles were able to create pressure on the outside, where Chiefs tackles Branden Albert and Eric Fisher had bad nights, but Philadelphia couldn’t get Smith off the field when it counted.

The key drive of the night came in the fourth quarter, when the Chiefs took over on their own 5-yard line after an Eagles touchdown and a muffed kickoff. With Philadelphia holding all the momentum and the Linc sensing a possible comeback victory over its old head coach, the Chiefs calmly put the game out of reach with an eight-minute, 15-second drive that moved the ball 73 yards downfield before settling for a 38-yard field goal from Ryan Succop that put them up 10 points with 3:24 to go. The most important play of the drive was on its opening third-and-10, when Smith threw out of the shadows of his own end zone to Donnie Avery, with much-maligned safety Nate Allen3 unable to close on Avery before the journeyman moved the sticks. Avery was unstoppable on third down Thursday; he converted a third-and-15, a third-and-19, a third-and-5 (for 51 yards), and that essential third-and-10, also adding a second-and-14 conversion. He caught all seven targets for 141 yards, which was pretty important considering that Dwayne Bowe had one catch for four yards. It was Avery’s best game as a pro.

And, of course, it all comes back to the Eagles’ offense. I mentioned earlier that the Chiefs didn’t have an actionable blueprint for stopping Philly, and the truth is that they don’t. In fact, while Vick struggled to throw the football, Philadelphia had another excellent day running the football, with the combination of Vick and LeSean McCoy producing a whopping 253 rushing yards on 25 carries. The Eagles actually outgained the Chiefs and averaged 6.8 yards per play, with virtually none of that yardage coming in garbage time. Nobody in the league averaged more than 6.2 yards per play last year. Philly was inconsistent, it made mistakes, and it’s probably stuck with a quarterback who will miss throws and a wideout who makes for a pale imitation of Jeremy Maclin, but those are personnel issues, not schematic ones.

The other problem in repeatedly judging and rejudging the Chip Kelly offense as pro-viable is that we’re working with a small sample size. Pretend, for a second, that Jim Harbaugh was just coming into the NFL this year and was running the same offensive scheme he’s been running in San Francisco since Colin Kaepernick took over, without having run it in the pros before. After that blowout loss to the Seahawks last week, there would have been dozens of columns hitting newspapers and websites talking about how the Pistol is a joke offense that won’t work in the NFL, and how a real physical professional defense can beat it up and expose its flaws. Because we’ve seen more evidence of Harbaugh’s scheme working, we know it was just a game against a great defense and a blip, not a fatal flaw that’s going to be exploited by every team from week to week.4

And that’s the truth with any really physical defense against any offensive scheme; a really good defense can beat up and slow down a great offense because that’s what defenses do. It’s the same reason why Alabama can adapt to whatever they see from great offensive minds and compete; it’s got the coaching and the athletes to win one-on-one battles across the field and eliminate schematic advantages. Since there are not many teams that have the athletes and the coaching of Alabama, it’s not like SMU can follow Alabama’s blueprint to beating Texas A&M when it heads to College Station this weekend. Likewise, while other NFL teams will watch the tape and dream about beating the Philadelphia tackles on 15 snaps and locking down the endless screens and streaks that Philly runs with its two corners, very few teams will actually be able to execute that game plan on Sundays. That the Chiefs can (and will) makes them one of the league’s most dangerous defenses.