The climb of my life

You’ve seen the highlights from last Friday night a million times. There’s Detroit pitcher Jeff Weaver standing on the mound in Kansas City, looking perturbed because the Royals asked the umpires to check his resin bag two separate times. After the home-plate ump leaves the mound, Weaver follows him and yells something towards the plate before turning back toward the outfield. As it turns out, he just made the critical mistake of challenging the manhood of Royals batter Mike Sweeney … who goes 6-foot-3, 225.

Boom! Suddenly, Sweeney charges the mound, sidestepping the umpire like a blitzing linebacker and stampeding toward the unsuspecting pitcher. Poor Weaver turns just in time to find Sweeney about to pull a Bobby Boucher on him. Splack! Sweeney pancakes Weaver and tosses in a few uppercuts for good measure before everyone else piles on them. In the words of the immortal Double Down Trent, “It’s on … It’s so on …”

As far as basebrawls go, this one between the Tigers and Royals probably rated about 8.5 on the Mayhem Scale. Punches were exchanged. Players rolled around. Out-of-shape coaches shoved one another. You even had a classic “Just when I think I’m out, they pull me back in!” moment, when the brawl re-ignited after Tigers catcher Robert Fick tossed an errant haymaker at Sweeney. And as usual, nobody — repeat, nobody — was hurt.

All in all, it made for a superb round of highlights that I watched at least 1,785 different times over the weekend.

Let’s face it: Nothing beats a lively major-league basebrawl. Think about it. They don’t allow benches to clear in basketball or hockey anymore. Nothing ever happens in football fights. Boxing died about six years ago. Soccer players would rather pratfall and roll around in mock agony than stand up for themselves. Golfers and tennis players are pansies. And when NASCAR drivers get frisky, they’re separated by about 100 crew members in 0.8 seconds.

But baseball players … they settle things the old-fashioned way. If somebody crosses The Line, it gets settled on the field. Your guys against mine. Mano-a-mano. Bring on Michael Buffer and let’s get ready to rummmmmmmm-bulllllllllllllllll.

Without further ado, here are 12 reasons why baseball fights are so damned loveable:

No. 1. Nobody ever gets hurt 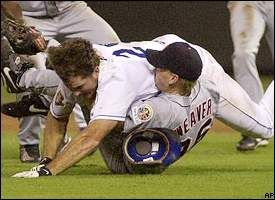 Can you remember a basebrawl participant getting injured in the past 25 years other than Boston pitcher Bill “The Spaceman” Lee, who separated his shoulder after being bodyslammed by Graig Nettles back in ’76? Players might take a few stitches here and there — they might even bruise a hand like Sweeney did last weekend — but you never see major bones broken or anything resembling a serious injury. It’s almost like baseball players are immune to harm as long as they’re throwing punches.

You would think that any activity which involves the following things …

… would result in an occasional catastrophic injury, but that just isn’t the case. Nobody ever gets seriously injured in a baseball fight. It’s astounding. Even when Juan Marichal pounded John Roseboro over the head with his bat in 1962, Roseboro walked off the field under his own power and missed only a few games. You could toss a chainsaw into a pile of brawling baseball players and probably fail to draw blood.

No. 2: Relievers charging in from the bullpen 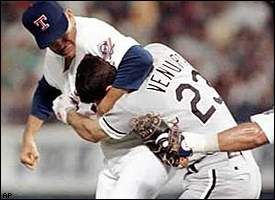 Always ridiculous, always useless, and always good comedy, especially when an overweight pitcher like Rich “El Guapo” Garces arrives, huffing and puffing, about 15 seconds after the fight has calmed down. Every time the Red Sox get into a brawl, I always picture Guapo sitting on the bullpen john reading Maxim magazine as Derek Lowe screams, “Come on, Guapo! They’re fighting!” And Guapo quickly buckles up and waddles out there with toilet paper dragging from his cleats.

No. 3. The approach
You have to love those two seconds after a batter decides to charge the pitcher, when he suddenly realizes, “Hey, I have to figure out a way to hurt this guy,” as he sprints full-speed towards the mound.

So what happens? They usually end up trying one of seven ploys:

A. The running haymaker
Never works. The pitcher always ducks it.

B. The stop-and-pop
They slow down, plant their feet and load up for a wild punch … but the catcher tackles them from behind before anything lands.

C. The helmet swing
My personal favorite … instead of throwing a punch, the hitter uses his helmet like an oversized set of brass knuckles. Not sure if it hurts, but it always looks good.

D. The helmet toss
The distant cousin of the helmet swing. Sweeney used this last Friday to mixed results; in retrospect, he would have been better off with the helmet swing. I’m sure he looked over the tapes with his trainer and realized this immediately. 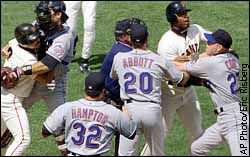 E. The open-field tackle
Probably the savviest move for hitters, because they have momentum, which means they can haul the pitcher down, land on top and sprinkle in some punches before the cavalry arrives. Sweeney worked this one to perfection Friday.

F. The karate kick
Mastered by George Bell against Bruce Kison in the mid-’80s, when Bell charged the mound during a Sox-Jays game, leaped in the air and unleashed a Rob Van Dam-esque superkick right into Kison’s leg. Probably the most dangerous move by a hitter (because of the spikes), it’s also an easy way to make everyone on the opposite team really, really angry. Basebrawlers look at karate kickers the same way prisoners look at child molesters.

G. The Izzy
You might remember Triple-A slugger Izzy Alcantara getting hit by a pitch this summer and super-kicking the catcher before charging the mound — apparently to eliminate the “getting caught from behind” factor — a move so outrageous that when Izzy subsequently charged the mound, everyone avoided him because they thought he had gone insane. Maybe the strangest basebrawl moment of all time.

While we’re on the subject, here are two things I would love to see batters attempt during that initial charge:

A. The Running Clothesline
Hey, it works in wrestling.

B. The Home Run Swing
For obvious reasons, hitters are discouraged from bringing their bat out to the mound for combat ? but that seems like a double-standard, doesn’t it? Somehow it’s OK to aim a 95-mph fastball at somebody’s head, but you can’t swing a bat into somebody’s ribs? Didn’t anyone see “The Warriors,” when Swan and Ajax laid out the Baseball Furies in Central Park? Hey, it’s not like anyone can get hurt in a baseball fight. We’ve already established that it’s impossible.

No. 4: The Brawl Thesaurus
Don’t you love when announcers and writers break out the thesaurus for basebrawl recaps? Where else can you hear words like “donnybrook,” “fracas” and “imbroglio”? And wouldn’t any of those words make splendid names for a band, or am I crazy?

No. 5: The Codes
Here’s a mysterious basebrawl code: If one of your players gets boinked by a pitch, you can retaliate against an opposing player of comparable value and skill — or, at least, a guy who plays the same position. 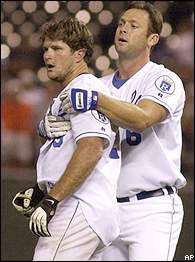 For instance, during a near-skirmish (thesaurus alert!) between the Indians and Red Sox last season, Pedro Martinez was pitching to Robbie Alomar in the eighth inning, and you knew some part-to-be-determined on the lower half of Robbie’s body was ready for a cowhide joyride. Why? Boston’s second baseman (Jose Offerman) had been blatantly plunked in the previous inning, which — by the mysterious basebrawl code — meant Pedro would be forced to retaliate against Alomar. And he did. Quid pro quo, Dr. Lecter.

No. 6: The batter who doesn’t really want to fight
After Pedro plunked him in the aforementioned incident, you might remember Alomar’s “Hold me back! You better hold me back! Could somebody please hold me back?” charge of the mound, which was definitely borrowed from the Arnold Horshack playbook.

Alomar got drilled, made a couple of half-hearted steps toward the mound, bulged his eyes and tried to seem menacing, as he waited for both benches to empty. Of course, as soon as the requisite number of players ran onto the field, Robbie was suddenly a ball of fire, desperately trying to break free from Sox catcher Jason Varitek to reach Pedro. Let me at him! Let me at him!

Gimme a break. You should get tossed from the game under those circumstances, if only because you just submitted a public résumé for a position with the Giant Wuss Foundation.

No. 7. The catcher
For whatever reason, the catcher becomes The Good Guy in a brawl … he detests violence and does everything possible to lodge himself between the pitcher and hitter, even if it means getting bowled over or pummeled with punches in the process. It’s like a bizarre Code of Honor exists for them: 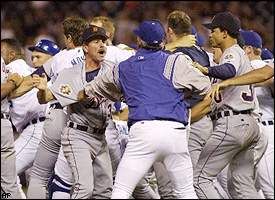 Thou shalt not get to my pitcher, even if I get trampled in the process.

Take Robert Fick’s performance on Friday: Since Sweeney charged the mound by surprise, Fick didn’t react in time and failed to protect his pitcher. So what happened? Outraged by the turn of events, Fick charged Sweeney a second time, after the fight had already cooled down, getting tag-teamed by two Royals in the process. And Fick wasn’t remotely injured or dazed, even though Sweeney snuck in some nasty cheapshots while Fick was being held down. Personally, I think it’s the whole “wearing a mask” thing — masks give catchers indestructible powers, like Michael Myers and Jason Voorhees.

The strange thing about catchers is how they repeatedly get steamrolled in home-plate collisions, yet they won’t become agitated unless somebody comes flying in spikes first. That’s a no-no. And when catchers become angry … well, you don’t want any part of them.

Remember when Carlton Fisk beat up Thurman Munson and Gene Michael at the same time back in ’72? After Munson barreled into home plate, Fisk flipped him over and started pummeling him … and when Michael (the next batter) helped Munson by grabbing Fisk, the Sox catcher turned the tables and started choking Michael while still flailing away at Munson.

No. 8: The post-game press conferences
You have to love when moron reporters ask pitchers questions like, “Were you trying to hit him?” after one of those retaliation/beanball brawls. What kind of answers are they expecting? 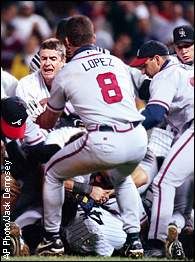 Yes, I was trying to hit him. I was actually aiming for his head, because I was hoping to put him into a coma. Could you suspend me for 10 games instead of two? And could you triple my fine? Thanks.

No. 9: Crazy guys
There’s usually That Guy in a basebrawl who comes flying out of the dugout throwing haymakers and trying to pull a Kermit Washington on someone. Notice how it’s never a star player, either … it’s always someone like Gabe Kapler or Russell Branyan, a frustrated guy hitting .240 who feels like taking it out on someone.

The weird thing here is that you usually know the identity of the Crazy Guy from year to year. For instance, on my beloved Red Sox team, our token Crazy Guy is Trot Nixon, who would probably chase a pitcher out of Fenway Park and onto the Mass Pike under the right circumstances. Trot hasn’t enjoyed his breakout basebrawl moment yet, but it’s coming, I promise you. Sometimes you can just tell.

Some other That Guys in a basebrawl: