When it’s time to walk away

Maybe the most alarming development of the 21st century — other than reality TV shows, Freddie Prinze Jr, bobble-head dolls and the fact that some females
actually identify with the dysfunctional characters on “Sex and the City” — has been the declining standards of etiquette in our society. 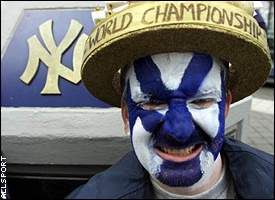 Whether it’s Little League parents, inconsiderate cell phoners, road rage, air rage, gabbing in movie theaters, unprovoked assaults, venom-spewing spectators or whatever else, everyone just seems to be bugging everyone else.

Of course, there isn’t a livelier venue for dissension than a summer baseball game. It’s sticky and uncomfortable. And expensive. Fans are crammed into every crevice of the park. Passions are running high. People are drinking. And since every social group is represented, you have a number of Those Guys at the game. Let the peeving begin!

With that in mind, here’s one man’s list of the “20 Most Annoying Fans at a Baseball Game”: