There’s been no such thing as a down year for Wisconsin basketball under head coach Bo Ryan. Season after season, no matter what talent exits or enters his program, you can count on the Badgers to factor into the Big Ten title chase and make an appearance on that grand stage in March. They’re like the college version of the San Antonio Spurs: not always the most exciting group, but one that makes fools out of anyone who overlooks them.

With their win over Minnesota on Thursday — and then yesterday’s 24-point exclamation point in Columbus — the Badgers clinched their first regular-season Big Ten title in seven years behind the most efficient offense in the country and the 25th-stingiest defense. For Ryan, it marked the fourth time he’s climbed to the top of one of the nation’s toughest conferences. That this title comes more than a decade after Ryan’s first lends a stark symmetry to the program’s impressive longevity and consistency.

As you can probably guess by their style of play, the key to Ryan and the Badgers’ annual success is nothing extreme or sexy. It boils down to just three basic elements: tall shooters, rebounding, and math.

Frank Kaminsky and His Forefathers 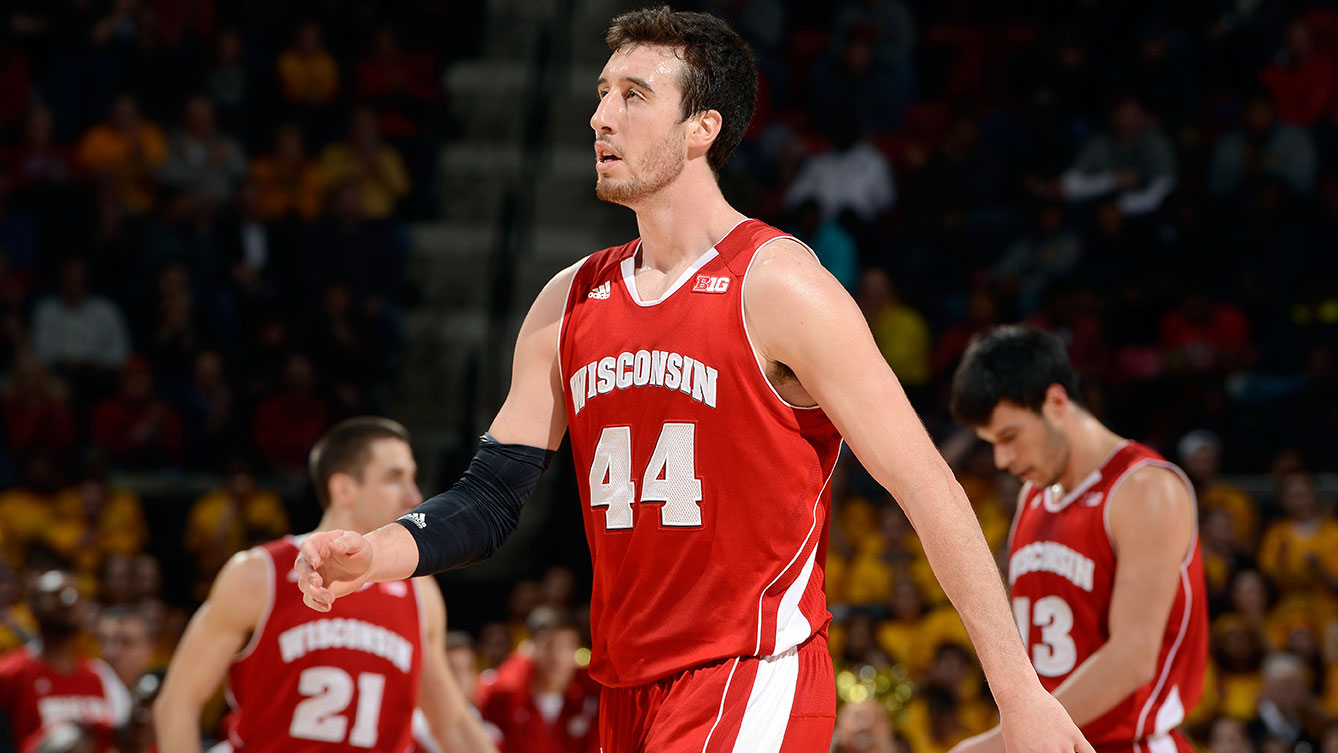 If you’re remotely a basketball fan, you’ve heard of Frank Kaminsky by now. The senior center is seemingly a shoo-in for the Wooden Award, ranking first in KenPom’s Player of the Year rating, and continues to shoot up NBA draft boards with each 25-point, six-rebound, seven-assist performance, like the one he authored in the win over the Gophers. But as good as Kaminsky has been — and he’s been damn good — he’s the latest in a long line of skilled big men to don a Wisconsin jersey.

In Ryan’s first season with the Badgers in 2001-02, there were senior holdover Charlie Wills and freshman newcomer Mike Wilkinson. Wilkinson passed the torch on to Brian Butch, who would later pair up in the same frontcourt with Marcus Landry. Landry then combined with Jon Leuer. In the 2010-11 season, the 6-foot-10 Leuer would pair up with a fellow senior, 6-foot-8 Keaton Nankivil, who took a few years to become a full-fledged member of Ryan’s rotation, to shoot 41.1 percent on a combined 275 3-pointers. Jared Berggren then took up the mantle, until Kaminsky, who was a freshman during his predecessor’s breakout junior year, was ready to ascend to the heights he occupies now.

Now, all of these big men experienced varying degrees of success as both shooters and players, but the one thing they all had in common is that their proficiency from beyond the arc gave the Badgers the ability to play a true “stretch” big at all times. This is a rarity in the basketball world, where teams at both the college and professional level are often forced to be decide between shooting and size. Throughout his entire tenure, Ryan — thanks in part to his emphasis on skill development for all positions — has never had to face this choice, and it’s been a huge boost to Wisconsin on both ends of the floor.

Offensively, the Badgers’ trademark 4-out, 1-in motion — four players occupy the perimeter around one player on the interior — is a chameleonic scheme known as “the Swing,” which adapts to whichever player, regardless of position, can create offense from the low post. But what breathes life into the scheme is what is essentially the holy grail at every level of basketball: spacing.

At the professional level, teams that can’t spread the floor with shooters for their primary playmakers can’t consistently run good offense. It’s really that simple. And that notion goes double for the college game, in which a shorter 3-point line, zones, less-skilled players, and (until the institution of the handchecking rule in 2013) more physical perimeter defense all put spacing at a premium.

For Ryan to use a motion offense that allows guards to play in the post, at least one of the two nominal big men needs to be able to pull his counterpart away from the basket; otherwise, there’d just be a sea of bodies in the lane. During the Alando Tucker years, the 6-foot-4 forward essentially functioned as Wisconsin’s primary post-up threat, but to get Tucker on the block, a big man needed to step out on the perimeter in his place. So, for all the importance of Kaminsky’s 3-point accuracy and post-up play, the threat of his shot is arguably his most valuable trait.

Just take a look at this possession from the Badgers’ matchup against Michigan State, in which not one but two perimeter players, Sam Dekker and Josh Gasser, get clean post touches — and eventually a basket — due to Kaminsky’s ability to pull the opposing center out of the paint.

Of course, most teams in college could get that sort of spacing in their offense. But to do so, they’d likely have to sacrifice size on the other end of the floor. And part of the reason for Wisconsin’s defensive success during Ryan’s run comes down to large human beings like Kaminsky, Berggren, and Butch, who loiter around the paint and make it tough for opponents to find good looks around the basket.

Under Tom Izzo, the Spartans have become synonymous with rebounding. No team in the country has been able to compete with Michigan State’s dominance on the glass while Izzo has been in charge — but Wisconsin comes close. Over the past nine years, the Badgers have been one of the better teams in the country at limiting opposing teams from corralling offensive rebounds.1

All stats in the table are from KenPom.com

It sounds simple, but most good defensive teams end possessions after just one shot. Despite never receiving the same level of acclaim Izzo has with the Spartans, Ryan has molded this Badgers program into one of the best defensive rebounding teams in the country. It’s a part — but not all — of the reason Wisconsin has ranked in the top 12 in defensive efficiency six times during Ryan’s 14 seasons as head coach. This year’s group isn’t quite that good, but the tradition has reached a point at which being the 25th-best defense in the nation can be considered a down year. 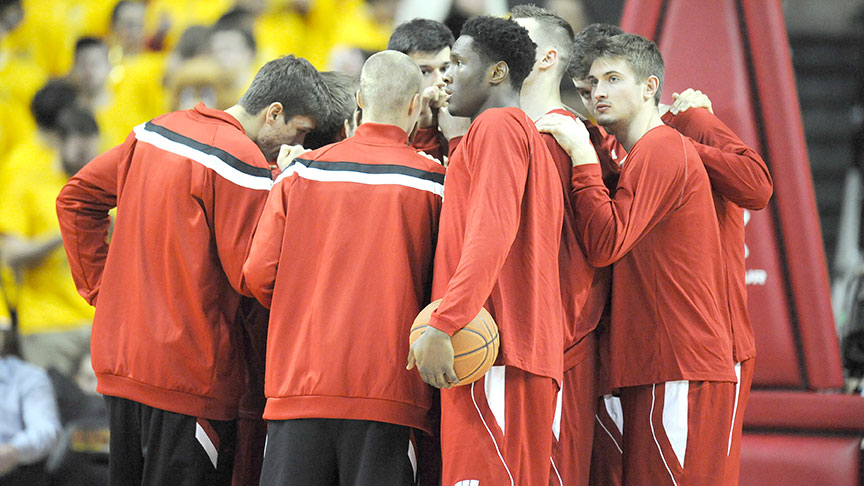 In a basic sense, the basketball quants have pretty much figured out offense in basketball. Free throws, layups, and 3-point shots are good, while midrange shots are inefficient and therefore undesirable. If your team shoots enough of the former and allows only the latter, it’ll be in good shape. Ryan’s Wisconsin is basically a stat geek’s dream.

For starters, Ryan is partial to the old basketball platitude “Shoot more free throws than your opponents.” And the Badgers certainly accomplish that, but not because they spend the bulk of their offensive possessions at the free throw line. Wisconsin never fouls. Like ever.

This year, the Badgers rank first in the country in opposing free throw rate, per Sports-Reference.com. This isn’t a one-year trend, either. Last year the Badgers ranked third; the season before that, eighth. In the six years of available data, Wisconsin has never been outside of the top third in the country when it comes to not hacking opponents.

On top of that, Ryan’s Badgers have always been good at eliminating another high-value shot: the 3-pointer. In the seven years of available data on Sports-Reference.com, Wisconsin has finished as high as sixth and never lower than 38th when it comes to allowing 3-point attempts by opponents, with a lone exception of last season, when the Badgers finished 92nd. And while coaches love to talk about their field goal percentage defense, studies have shown that 3-point percentage defense is essentially random from year to year, meaning the only true way to consistently defend 3s is to not allow them in the first place.

Although the Badgers don’t exactly bomb away from beyond the arc, they use the 3-point shot more than most. Their highest finish in 3-point attempts per field goal attempt came during the 2011-12 season, when Wisconsin was 20th in the country, but they’ve been in the top 45 of that category in five of the past six seasons.

Like the Spurs in the NBA, Wisconsin remains awesome year after year because of a commitment to smart, efficient basketball trends. No matter how this season ends up, Kaminsky and several key members of this current Wisconsin team are set to depart, creating a massive hole in the team’s rotation. But we’ve done the math, and betting against the Badgers — and Ryan — is a losing proposition.