It was 100 minutes before kickoff and we found ourselves on BR-101, the major thoroughfare in these parts, penned in by three trucks, one ahead of us, one to the left, and one inching in from the breakdown lane on the right, preparing to add some Chevy Classic sandwich meat to the 18-wheeler bread.

We were 15 miles away from our destination but we could have been on Mars, a waterlogged Mars. An overnight deluge that continued into the morning incapacitated Recife, turning what should have been an hour-long drive into a epic tale of crawling along, wondering what horrors lay ahead. Over the last hour, we had gone less than eight miles, and that included the two we covered by driving around a favela, attempting to dodge traffic, only to be stonewalled by chest-high water streaming across one of the streets. I might be mixing my metaphors here, but that’s what Brazil can do to you on a Thursday afternoon, man.

Anyway, back to the truck on the right. A man, standing unprotected on the back of its flatbed, oblivious to the dumping rain, would not stop screaming “Italia, Italia” at our car. It was unclear why. A little farther on, two guys walked by on the shoulder, strolling without purpose and twirling their red, white, and blue umbrellas. They easily outpaced our car.

This was a low point. Office Space in Brazil. We crawled along. Here’s a picture of a horse and carriage chilling in the median. I had plenty of time to frame the shot: 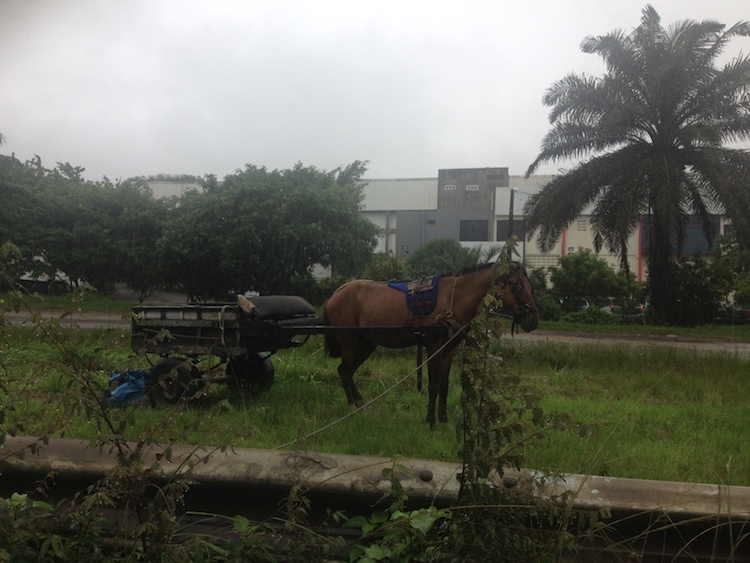 At this point, it was becoming clear that Recife was basically underwater. After the match, we would find out that many of the friends and family of the American players hadn’t made it to the game, stymied by the conditions. Graham Zusi didn’t know until he came off the field that his parents and siblings had stayed back in the hotel to watch the game, afraid they’d miss it if they tried to battle the traffic.

But we were in it, battling. We contemplated trying another back road. While we were doing so, dithering just before the off-ramp, a car pulled up next to us and a man stuck his head out the window. “Our driver said that the back roads are washed out,” he said, the gravitas in his expression overcoming the United States–themed Mardi Gras beads around his neck. “Don’t go there.” An American flag stuck out from the vent on his passenger side dashboard. We trusted him. What other choice was there? The vent in our car was spewing white smoke that we were trying to convince ourselves was harmless. Google, which had underestimated our predicament all morning, reported that we were an hour and 10 minutes out, with an hour and eight minutes until kickoff. It looked bad.

The night, of course, is always darkest before the dawn. And by that, I mean the real traffic jam–causing element of the trip’s third movement was a 150-yard stretch of BR-101 covered in two-and-a-half feet of water. Options included: Giving up and drinking Pitu — a type of cachaça that is 40 percent ABV and costs $1.25 for a 12-ounce can — that a woman on the side of the road indicated we could share with her; paying the friendly teenagers who offered to push our car through; caulking the wagon and floating; or hoping the Classic could get through on its own merit. We took the last option: An inch and a half of water came up through the floor mats, and the RPMs dropped below 2,000, but we made it out intact. “There were no other plays,” my friend Nate said.

Right. So the game. The United States needed a tie to advance (or a loss and some help, which we’ll get to in a bit). Germany was after a point, too. There was pre-match talk of a gentlemen’s draw, which you could dispense with after the first 10 minutes or so, during which Jogi Löw’s squad had pretty much all of the ball. The only place the Americans looked competitive was in the stands, where they outnumbered the opponents, although the American Outlaws might want to work on their poncho game.

The stadium had a strange vibe, perhaps nervousness, perhaps energy dampened by the rain, perhaps less partisan because the Brazilians wanted to watch Germany. Regardless, the atmosphere was fun, not like the electric moments of Mexico-Croatia.

Jürgen Klinsmann went with Brad Davis for Alejandro Bedoya in midfield and Omar Gonzalez in place of Geoff Cameron in the back. The center back made an early mistake, but recovered well after and looked extremely comfortable slide-tackling with his not-short legs. The field was soaked, so much so that the teams had to warm up behind the goals and eschew the usual one- and two-touch passing games. But it looked fun to run around out there. Uzbek referee Ravshan Irmatov let the players play.

The U.S. wasn’t playing well, but the team was swarming in the midfield. Michael Bradley, still off his attacking game despite being the player who has covered the most ground at the World Cup, has become a master at running the double-team. Basketball-esque defensive rotations aren’t something you normally associate with soccer, but that’s the best way to describe what he does. Clint Dempsey, meanwhile, did his anger bit, getting into it with Bastian Schweinsteiger right before halftime.

Thomas Müller broke the deadlock in the 55th minute. His effort was just so effortless, the kind of skill the Americans can show occasionally — Jermaine Jones against Portugal, for example — but not on a consistent basis. That shot, more than any other moment, was the difference between the Americans and the Germans.

Somewhere in Brasília, Ghana and Portugal sat tied. A goal from the African team would give it the upper hand on the Americans, who, let’s be honest here, probably weren’t going to score.

Back in Arena Pernambuco, Bedoya and Jones collided, sending both to the turf. Jones, who said after the game he thought he had a broken nose, and was sporting the bump to prove it, walked off under his own power but looked wobbly. You didn’t want to think that state embodied the U.S.’s chances, but you wouldn’t have been criticized for saying so, either.

And then Cristiano Ronaldo scored for Portugal, making it 2-1 and giving the Americans a huge cushion. An “I Believe” chant rang out around the stadium in Recife, which no one could have actually believed, but it didn’t matter. By the time a pitch invader wearing a Germany jersey high-fived a willing Muller, the result was a formality. The U.S. would lose but it would play another day.

In the chaos at the final whistle, Davis informed Zusi that the Americans were through. The Sporting Kansas City midfielder raised his hands in celebration, the round of 16 waiting for everyone on the field.

If you followed Zusi’s hands into the sky, you would have noticed that it had stopped raining in Recife.