As Kevin Durant stood behind that MVP lectern on Tuesday, he demonstrated a depth of character that is exceedingly rare for any person, let alone a superstar athlete. His speech was truly inspiring. Its core theme was the idea that individual growth is far from an individual accomplishment; it’s a collective process. 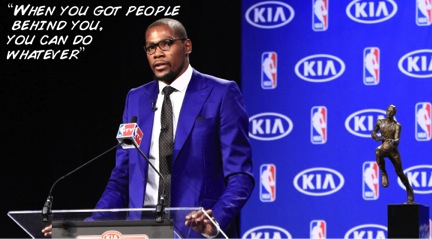 It struck a nerve. Maybe it’s because he revealed himself to be one of the most thoughtful guys in the NBA, or maybe it was because now more than ever, we needed a reminder of the goodness of our beloved league. Either way, he rerouted a ceremony designed to bestow glory onto an indvidual into an emotional seminar on the significance of friends, family, and teamwork. It was a 27-minute refresher on the power of self-awareness and humility. As he addressed his mother, he expressed legitimate pride about how far they’d come as a family.

“You wake me up in the middle of the night in the summertime, making me run up a hill, making me do pushups. Screaming at me from the sidelines of my games at 8 or 9 years old.”

Then he brought the waterworks: “When you didn’t eat, you made sure we ate. You went to sleep hungry. You sacrificed for us. You’re the real MVP.”

Kevin Durant has been playing in the NBA since Halloween of 2007. At 25, he’s wrapping up his seventh NBA season; although he’s just now entering the prime of his career, it’s remarkable how far he’s already come. 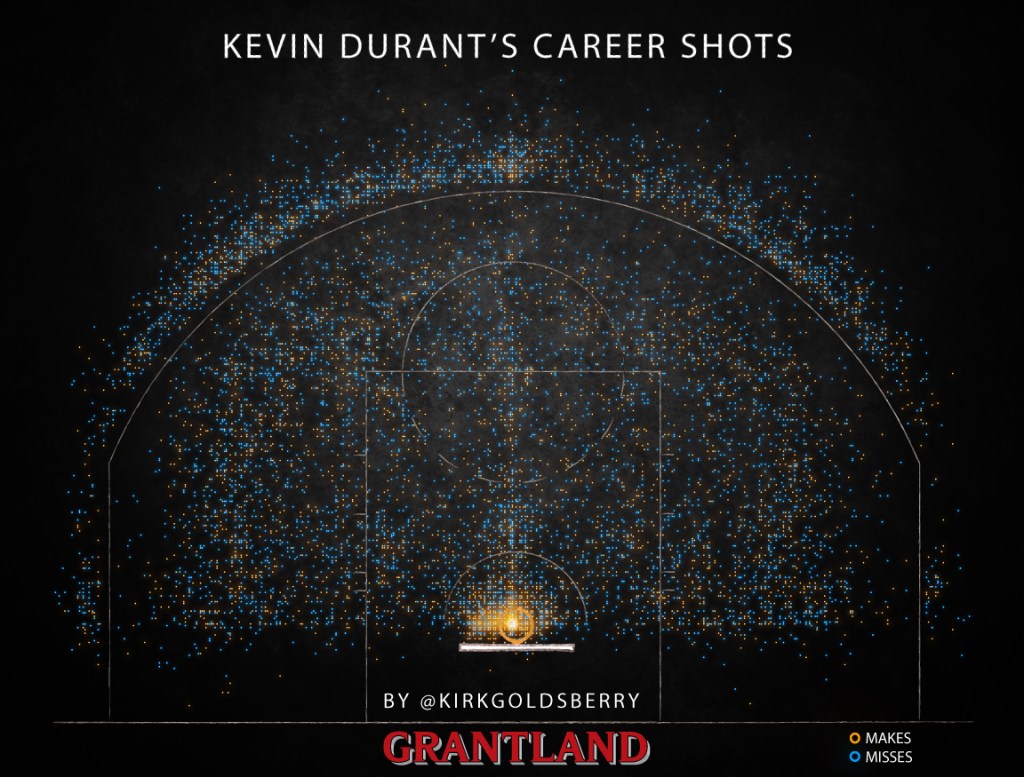 At some point this season, Durant attempted his 10,000th NBA shot. Thanks to Malcolm Gladwell, that number has come to be newly symbolic in some circles. Whether or not “10,000” has any sort of magical powers, it’s fair to say Durant’s ridiculous ability to score has become an outlier in the NBA. Durant is not only the most valuable player in the NBA, he is also the most efficient scoring talent.

That might not seem like a controversial argument, but it hasn’t always been this way. As Durant pointed out Tuesday, he’s come a long way as both a person and a player.

Durant’s rookie year in Seattle was wobbly. His first coach was P.J. Carlesimo, who couldn’t quite figure out how to use him. He tried to make Durant into a 2-guard and it didn’t work. That year, Durant shot 43 percent from the field and 29 percent from beyond the arc. He had more turnovers than assists. His favorite shot was the long 2, and he was a below-average shooter over much of the court. 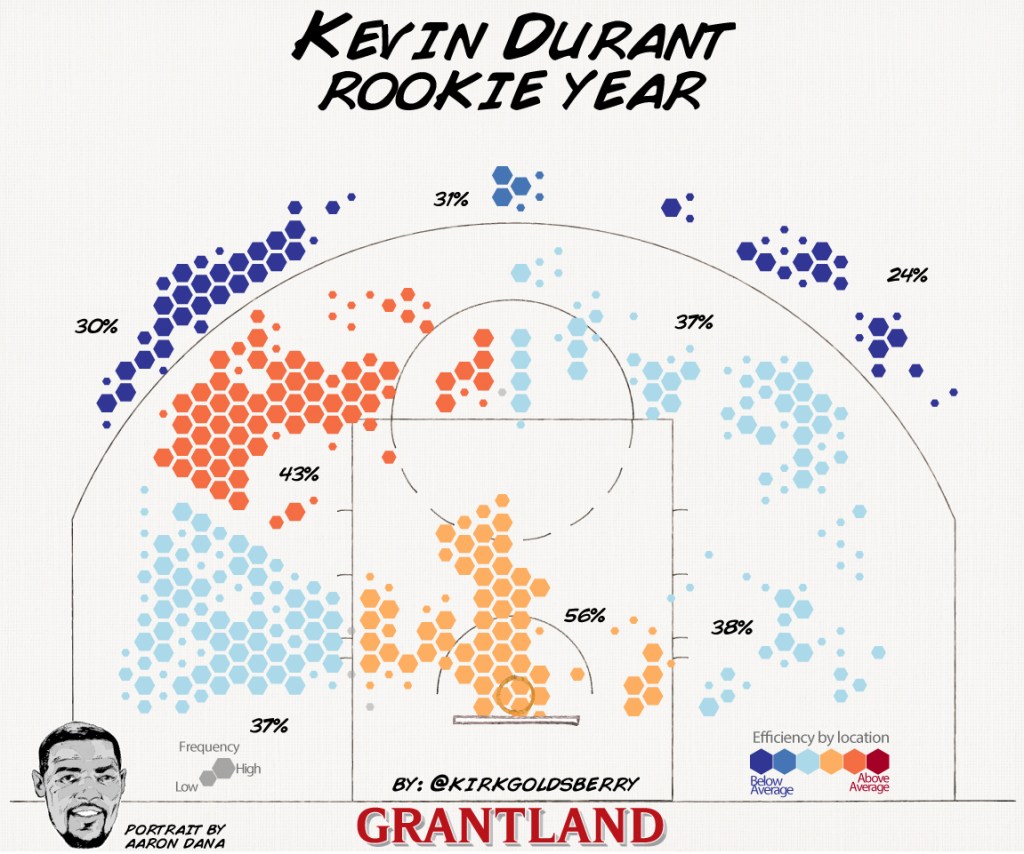 Immediately after Carlesimo got fired, Scott Brooks took over and things began to change. The team moved to Oklahoma and Durant moved to the frontcourt; that’s when he really took shape as an offensive weapon.

Durant’s game evolved a little bit each year. He won his first scoring title in his third season. He won it again each of the following two years. In his sixth season (last year) Durant became a 50/40/90 guy, while also scoring 28 points per game. Nobody in the league had done that since Larry Bird in his prime. Durant was 24.

This season, Durant led the league in scoring, minutes, free throws attempted, free throws made, and made shots. He also set a career mark in assists. At 25, Durant has become the most complete offensive player in the league. 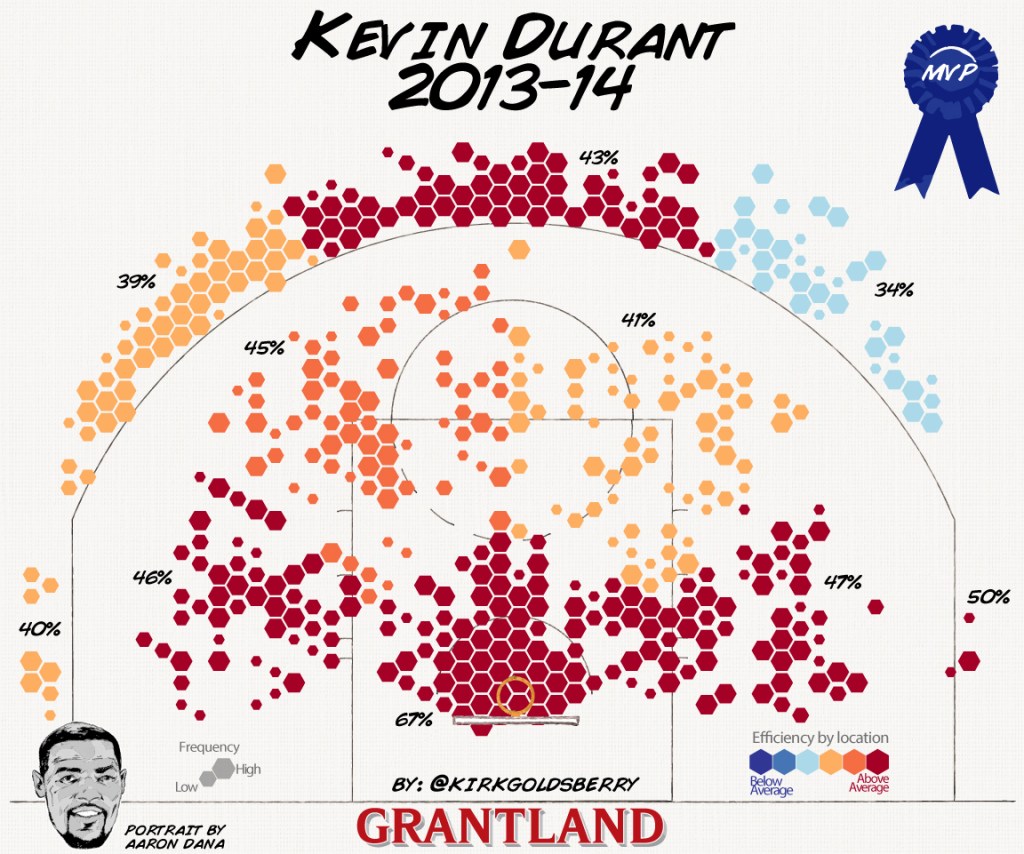 It’s this blend of freakish volume and efficiency that makes Durant the best shooter in the world. His ability to create good shots near the basket, in the midrange, and beyond the arc is second to none. Durant accrued more unassisted field goals this year than players like Kemba Walker and Tim Duncan had total field goals.

This from-scratch creativity deodorizes some of the shortcomings of his team’s offense. Over the last seven seasons, his handle has become one of the best in the league, one that is truly unprecedented for a player of his height. The end result is a team-first player with an all-world jumper, slick ballhandling, and top-notch basketball instinct. If you were going to build a modern basketball player in a lab, he’d come out looking a lot like Kevin Durant.

Durant is the most valuable player, but scoring isn’t the only thing of value about him. His ability to create shots for his teammates also deserves some attention. Durant led his team in total assists this season with 445. Russell Westbrook averaged more assists per game than Durant, but Westbrook also missed long stretches of games, and Durant’s ability to slide into a greater playmaking role during those periods was a key to his team’s success.

Nobody benefited from that playmaking more than Serge Ibaka; Durant assisted on 166 of Ibaka’s 524 made field goals. Ibaka thrives in the midrange, and he gets a lot of open shots there because Durant attracts help defenders and makes the right pass.

Durant made 192 3s during the regular season, but it’s worth noting that he assisted on 114. In other words, Durant had his hand in 306 made triples this season. Of the 19 NBA players to assist on at least 114 made 3s this year, only two are forwards, Durant and LeBron James — the winners of five of the last six NBA MVP awards.

Anyway, while Durant’s ability to score rightly gets many of the headlines, you can’t fully admire him if you’re sleeping on his assists. 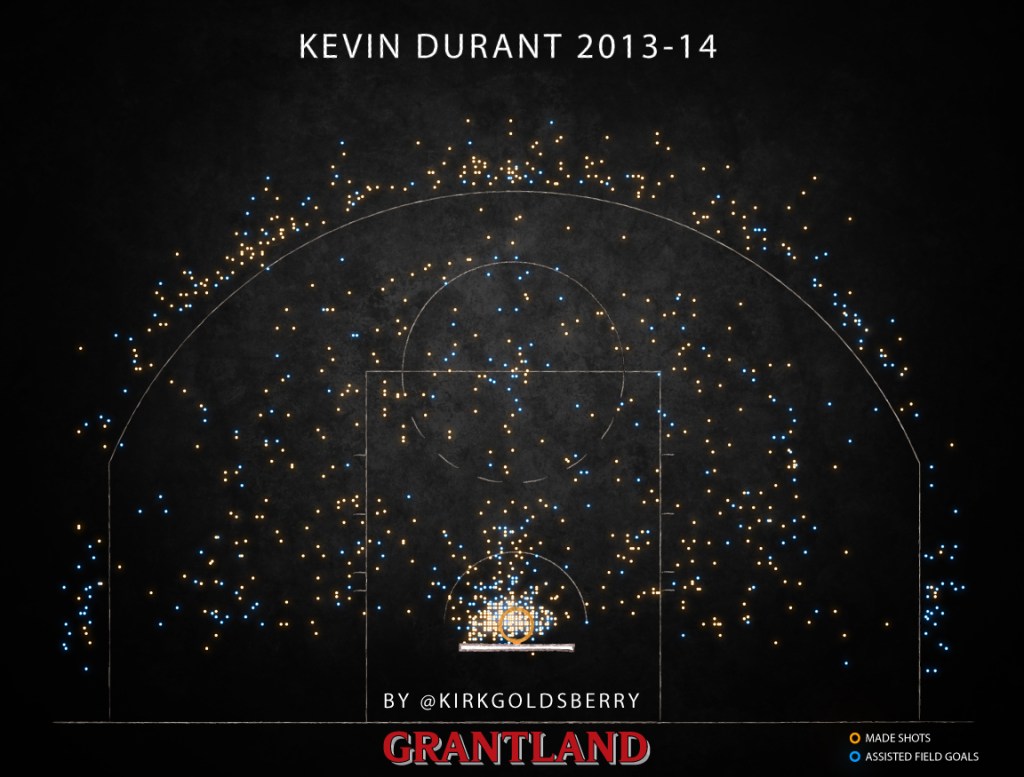 Durant gave a speech accepting an individual award and spent most of it praising other people. It’s important to single out accomplishments, but you have to contextualize the origins of those accomplishments. With that in mind, Durant led the league in scoring, but he had some help. Here are the guys who combined to assist on 401 of Durant’s field goals this year:

“When you got people behind you, you can do whatever.”