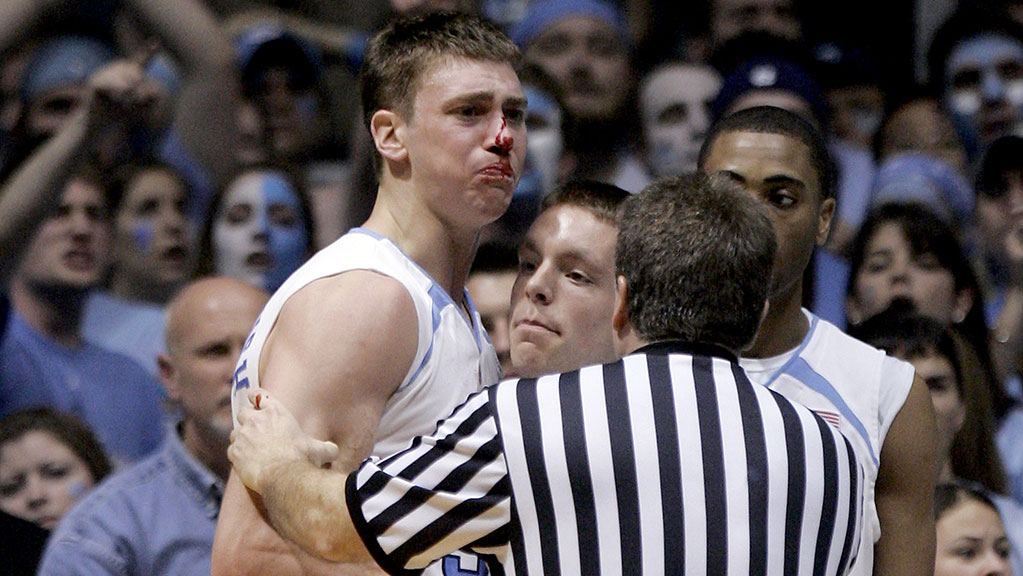 We here at Grantland know you all are very wonderful people with incredibly busy lives that don’t include spending hours researching the Duke-UNC rivalry. But at some point, somebody will mention the biggest rivalry in college basketball, and you’ll need to know more than the names Michael Jordan and Christian Laettner. So to boost your basketball knowledge and earn awe points from your friends ahead of March Madness, we’ve put together the Duke-UNC College Basketball Primer: Everything You Need to Know to Sound Like You Know Everything.

North Carolina hosts Duke tonight at 9 p.m. Eastern at the Dean E. Smith Center. The game will be broadcast on both ESPN and the ACC Network.

The two schools are both in the Triangle area (Raleigh–Chapel Hill–Durham) of North Carolina. They are separated by about 10 miles of driving — one long highway and a whole bunch of trees. Chapel Hill is a state school with a large North Carolina fan base and boasts the lovely Franklin Street, filled with bars offering cheap beer and karaoke, family-friendly restaurants, romantic rooftop dining, and fun dessert options. Duke is a private school with a much, much smaller North Carolina fan base and has the more eclectic Ninth Street, which offers tacos, breakfast foods, late-night burritos, and cute cafés and novelty craft and knickknack stores. The two both have strong academic curricula, with specialty schools like Duke’s Pratt School of Engineering and UNC’s School of Journalism and Mass Communication. They regularly have teams in the top 10 across all sports, from women’s basketball to men’s lacrosse to women’s soccer and men’s basketball. Both schools’ colors are blue — Carolina is a light blue, while Duke is a royal blue. Oh, and Carolina’s mascot is a ram (though they are the Carolina Tar Heels) and Duke’s is a blue devil that has gone under the knife several times over the years.

Enough with the fluffy talk about how great both schools are. Let’s get down to what we’re all actually here for — the lowdown on the Duke-UNC men’s basketball rivalry. Duke is coached by Mike Krzyzewski (pronounced “sha-SHEF-skee” per the Duke media guide), and North Carolina is coached by “daggum” Roy Williams. Here are some historical facts specific to tonight’s game:

Here are some more general historical facts about the two schools’ basketball programs:

Highlights from Past UNC-Duke Games

(We apologize if we’ve omitted any obvious ones. Feel free to contribute your own memories in the comments section.)

The two teams met at the ACC tournament, with the Blue Devils pulling off a huge upset over the Tar Heels 77-75 in the semifinals. At the time, North Carolina was ranked no. 1 in the nation and had lost only one game all season. Relevant players: Jay Bilas, Johnny Dawkins, Michael Jordan, Matt Doherty.

This game literally had blood, sweat, and (possibly) tears. After a dry stretch toward the end of the game without a Duke field goal, Eric Montross headed to the free throw line after being elbowed, with blood streaming down his face, to close the lead to 75-73. With 24 seconds left, Christian Laettner made two unsuccessful attempts to tie the game. Oh, and Bobby Hurley played on a broken foot because, well, Duke-UNC. Relevant players: Christian Laettner, Hubert Davis, Thomas Hill, Derrick Phelps.

North Carolina came out to a strong start, pulling away early with a 17-point lead. A 10-point run by Duke helped even the score, though, and a 30-footer by Jeff Capel sent the game into OT at 95-95. The Blue Devils had a last chance with 13 seconds left in double overtime after a UNC turnover, but they failed to deliver, giving the Tar Heels a win at Cameron in the highest-scoring Duke-UNC game ever. Relevant players: Jerry Stackhouse, Cherokee Parks.

This marked the first game between Krzyzewski and Williams (then in his first year). The game came down to the final seconds in the Dean Dome when Chris Duhon made a reverse layup with 6.5 seconds left to give the Blue Devils the win. Relevant Players: Luol Deng, Chris Duhon, Shelden Williams, J.J. Redick, Rashad McCants, Jawad Williams.

This was yet another physical game that featured the famous image of Tyler Hansbrough with a bloody nose and bruised face. Hansbrough went for a layup with 14.5 seconds remaining and was hit in the face by Gerald Henderson’s right elbow. Henderson was immediately rejected and later suspended for one game. Relevant players: Tyler Hansbrough, Greg Paulus, Gerald Henderson, Ty Lawson. And here’s the image for good measure: 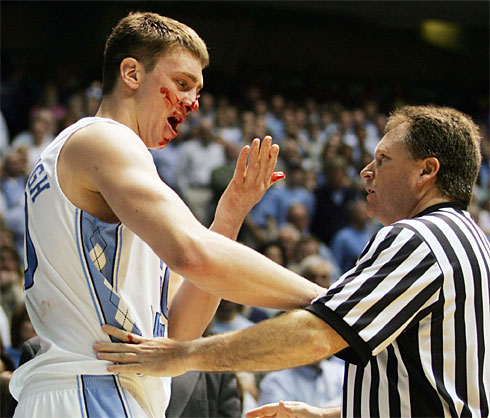 This is all you really need to know:

Oh, and the day after Austin Rivers’s 3 over Tyler Zeller, North Carolina’s living ram mascot, Ramses, died at 8 years old. We’re not saying it’s Rivers’s fault, but some of us don’t deal with heartbreak as well as others.