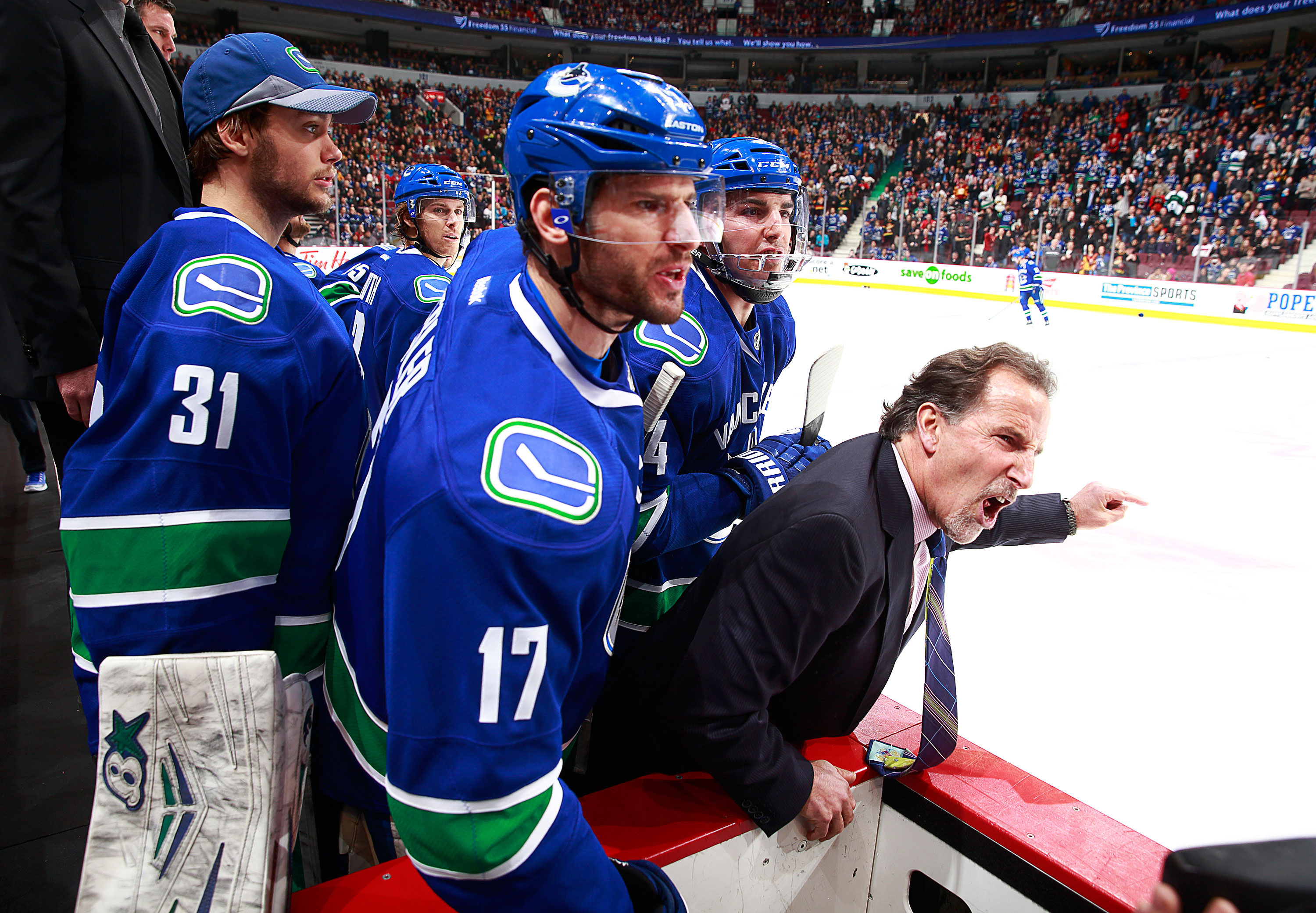 Saturday night’s Canucks-Flames game started off pleasantly enough. The pregame skate went off without a hitch. The anthem was nice. Most of the fans managed to find their seats before the opening faceoff.

In case you lost track, that would be five fights, 142 penalty minutes, and eight ejections, all in the first two seconds of the game. Special credit goes to Canucks rookie Kellan Lain, who was making his NHL debut and now holds the record for career PIM rate. Hopefully the advanced-stats guys will let me know whether or not that’s sustainable.

As you’d expect, the scene led to the inevitable round of outrage and concern trolling, which spawned the usual thoughtful counterarguments. But whatever your views on fighting, this one was a bit of a debacle. There’s certainly plenty of blame to go around, and depending on your allegiances, one side may deserve more than the other. Let’s see if we can sort it out.

The visiting team sets their starting lineup first, of course, so any responsibility for the brawl has to begin with Flames coach Bob Hartley. He wasn’t even especially subtle about his intentions, having tough-guy winger Kevin Westgarth line up at center for the faceoff.

And while the move didn’t seem to be a direct response to anything that had gone on between the two teams in the past, it’s worth remembering that the Canucks had spent most of the week gooning it up in a series of over-the-top attempts to reestablish their team-toughness bona fides (including this brawl, which earned them an ultra-rare chance to kill off a seven-minute 5-on-3). So it’s possible that Hartley was trying the old “sucker-punch the bully in the mouth before he gets a chance to make a fist” move.

But once the Flames lineup was set, Canucks coach John Tortorella was in a no-win situation. If he puts his own idiots (their words) out on the ice, he makes the resulting chaos inevitable. But while many are suggesting that he should have instead sent his skill players out to defuse the situation, let’s remember that Toronto’s Randy Carlyle tried exactly that with Phil Kessel and John Scott and was rewarded with this.

(And it’s not like the Flames didn’t know how Tortorella would respond. He’d been put in the very same situation two years ago, when he was coaching the Rangers and was confronted with an enforcer-loaded starting lineup from the Devils. This was the result.)

But while Tortorella may not have done anything wrong leading up to the brawl, he abandoned any moral high ground during the first intermission:

Yes, that’s the coach of the Canucks trying to breech the Flames dressing room, presumably to get his hands on Hartley. He didn’t make it, but the attempt alone will likely draw a severe punishment from the league.

Meanwhile, the Canucks won 3-2 in a shootout. Hey, if you’re going to start the game off with a silly sideshow that many think has no place in the sport, you may as well finish with one too.

The attention of the hockey world will shift to California this week, as we build up to Saturday’s outdoor game between the Ducks and Kings at Dodger Stadium. It’s a fantastic matchup, with the Ducks riding one of the greatest hot streaks of all time and the Kings just two years removed from a championship. I’m genuinely excited for the game, and you should be too.

And yet it’s hard to shake a nagging feeling that we’re forgetting about somebody. Wasn’t there a third California team at some point? I could swear I remember something about that. Wait … wait … it will come to me …

Oh, right, the San Jose Sharks, who’ve spent much of the past few months silently falling off the radar. That’s been an unexpected turn, because it wasn’t that long ago that the Sharks were dominating the league. They roared out to a 10-1-1 start, sitting in first place overall and often looking like they were just toying with their opponents. At one point, certain people were calling them the “prohibitive Stanley Cup favorite.”

But since then, they’ve watched the Ducks take over their spot as both the Pacific Division leaders and the “these guys look downright unbeatable” team of the moment. They’re now 11 points back of Anaheim, and are also looking up at the Blackhawks, Penguins, and Blues.

So, what went wrong? Well, for one thing, “wrong” is probably stretching it. The Sharks are 21-11-5 since those first dozen games, so they’re not exactly slumping. If a 114-point pace and fifth spot overall is a problem, most teams would love to have it.

But there have been some areas of concern, including a five-game losing streak in November and a four-game streak the following month. Recent injuries to young stars Tomas Hertl and Logan Couture haven’t helped. And the Sharks have padded their point total with eight shootout wins, trailing only Toronto for the league lead.

Then again, slumps and injuries happen to everyone over a long season, and if the NHL insists on handing out points in a shootout then there’s no shame in banking them. And it’s not like you have to look very hard to find positives. The Sharks remain one of the league’s best teams at home, they’re first in shots per game, and they’ve enjoyed the league’s top penalty differential.

A look at their underlying fancystats shows an interesting month-by-month pattern: up in October, down in November, up again in December, and down again this month. But up and down are relative terms, and in San Jose’s case even the down stretches are right around 50 percent possession. And when they’re at their best, they’re as good as any team in the league.

So while they won’t be getting a share of the attention that will be heaped on their state rivals this week, that may suit the Sharks just fine. It’s not often you can dominate the league for long stretches and still find yourself being considered an afterthought. For a team that seems destined for a first-round meeting with the Kings, every little bit of motivation may help.

The Blue Jackets were a nice, tidy narrative over the season’s first few months. They came into the year as the long-time doormat who finally had some reason for optimism, and thanks to some savvy roster upgrades and a move to a weaker conference, they were ready to make a run at a playoff spot. Then they stunk — “It takes an awful lot of awful to earn the title of ‘biggest disappointment in the Metro Division,’ but it may be time to crown the Columbus Blue Jackets,” was how I phrased it — and were quickly written out of the race. Their star goalie regressed, their best players kept getting hurt, and that was it. Thanks for coming out, Columbus, and maybe we’ll see you next year.

Well, not so fast, because suddenly the Blue Jackets are the hottest team east of Anaheim. They’ve won six straight and have moved into possession of the conference’s final wild-card spot.

The most recent win in the streak wasn’t exactly pretty, as the Blue Jackets needed a shootout to beat the Sabres on Saturday night. Columbus actually held a 3-1 edge in the game’s middle 58 minutes, but surrendered goals to Tyler Myers in both the opening minute and the final one, the latter on a power play to tie the game with just 25 seconds left. Overtime settled nothing, and Ryan Johansen was the only one to manage a goal in the shootout.

Still, two points is two points and the Blue Jackets have been earning plenty lately. They’ve been bolstered by Nathan Horton, the power forward they signed to a big free-agent deal despite knowing that a shoulder injury would keep him out until the new year. He debuted on January 2, scoring a goal in a 2-0 win over the Coyotes, and has so far recorded five points in eight games. He’s a veteran with a Cup ring, and has been praised for his calming presence.

Sergei Bobrovsky has also returned after missing a month with a strained groin, and has gone 5-0 with a .947 save percentage. And much-maligned defenseman Jack Johnson has been better lately, perhaps partly due to some extra motivation after being a surprise omission from the U.S. Olympic roster.

(The Blue Jackets have also benefited from a nice little run of puck luck since December, but let’s not ruin a good redemption story with details.)

If they’re going to continue the win streak, they’ll need to beat a tough opponent Tuesday night when the Kings come to town. But after that, they’ll spend most of the rest of the month facing other Eastern Conference teams battling for those final playoff spots, including the Flyers, Hurricanes, Senators, and Capitals.

• The weekend’s best matchup on paper was Sunday’s Stanley Cup final rematch between the Blackhawks and Bruins. And it turned out to be a pretty good little game, with the Hawks taking a 3-2 decision in the shootout. Corey Crawford and Tuukka Rask were both excellent, while Brad Marchand had both Bruins goals.

• The Blackhawks also beat the Ducks on Friday, snapping Anaheim’s eight-game winning streak. The Ducks started a new streak the next day, beating the Blues 3-2.

• The Jets are undefeated under new coach Paul Maurice, beating the Oilers 3-2 in overtime on a goal from rookie defenseman Jacob Trouba.

• Stars captain Jamie Benn delivered what appeared to be a flagrant elbow to the head of Minnesota’s Matt Cooke on Saturday, but escaped a hearing with the league. The Wild won the game in overtime, 3-2.

• The Red Wings beat the Kings 3-2 in a shootout, thanks to a bizarre goal late in the third period that shouldn’t have counted.

• Wait, did every game from the weekend end 3-2? [Checks schedule.] No, just eight of them. That’s still seems high, right? I’m pretty sure that’s too high. Let’s get to some other scores, please.

• Ah, here’s one: The Sharks and Lightning played a fun one on Saturday, with the Sharks escaping with a 5-4 win. Joe Pavelski had a hat trick for the winners, but was upstaged by Martin St. Louis, who scored all four Tampa Bay goals in a losing cause.

• The highest-scoring game of the weekend was a 6-4 Flyers win over the Islanders. Ray Emery got the win in relief of Steve Mason, who was pulled after allowing four goals just hours after signing a three-year extension.

• It was a good weekend for the Rangers, who earned a pair of 4-1 wins over fellow Eastern Conference playoff hopefuls Ottawa and Washington. New York is holding down sole possession of second place in the Metro.

• Finally, I’m often accused of ignoring the Canadiens in this space, and after careful consideration I’ve conceded that my critics may be right. So in the spirit of reconciliation, let’s close with an update on Montreal: It lost to the Maple Leafs on Saturday, in an entertaining 5-3 game that was highlighted by a little bit of magic by Nazem Kadri and this late game winner from James van Riemsdyk. See, Habs fans? Now we’re all friends again.