This week (sort of) marks the midway point of the NFL season, and although it’s still WAY too early to pass judgment on this year’s draft class, a few players have already stood out. These are the Offensive and Defensive All-Rookie Teams as we get ready for Week 8.

If I were Sammy Watkins, every day on the way out of work, I’d give Kyle Orton an uncomfortably long hug. The jump from EJ Manuel to Orton has been just enough to unleash Watkins on any defense that doesn’t feature Darrelle Revis. In his two non-Patriot games since Orton took over, Watkins has averaged eight catches and 104.5 yards on 13 targets a game, and he’s doing it in a ton of different ways.

The way Watkins accelerates across the field makes game tape look doctored. With enough time, he’s impossible to stay with on crossing routes, and on his first touchdown Sunday, he showed off that same speed up the sideline. Right now, there’s reason to get excited every time the Bills drop back to pass. It’s been a long time since anyone could say that. Since the merger, 12 rookie receivers have gone over the 1,000-yard mark, and with Orton playing quarterback, Watkins is a good bet to be no. 13.

Since draft day, these guys have traced such similar paths that it’s almost bizarre. Both were 6-foot-4, short-armed offensive tackles in college — Joel Bitonio at Nevada and Zack Martin at Notre Dame — who projected as guards in the NFL. That move isn’t always easy. Guards aren’t just players who were too small or too slow to make it at tackle, and considering how much quicker plays develop inside, adjusting can take some time.

Luckily, they got to settle in next to the two best centers in the league. Alex Mack and Travis Frederick are both former first-rounders who have played like it, and adjusting to a new position and a new game is a little easier with that type of help. It goes even further for Bitonio, who has Joe Thomas on the other side.

Who’s playing next to them only goes so far, though. Mack is gone for the season, and in his first game without him, Bitonio was still great against the Jaguars. He’s been a destroyer of worlds in the run game all season, moving well in Cleveland’s zone scheme but also dominating people at the line of scrimmage. It took Martin a few games, but he’s on his way, too. He was probably the Cowboys’ best lineman in their win against the Seahawks — and that’s saying something. Before Mack went down, Dallas and Cleveland had arguably the two best offensive lines in football. These two were the final piece of each. 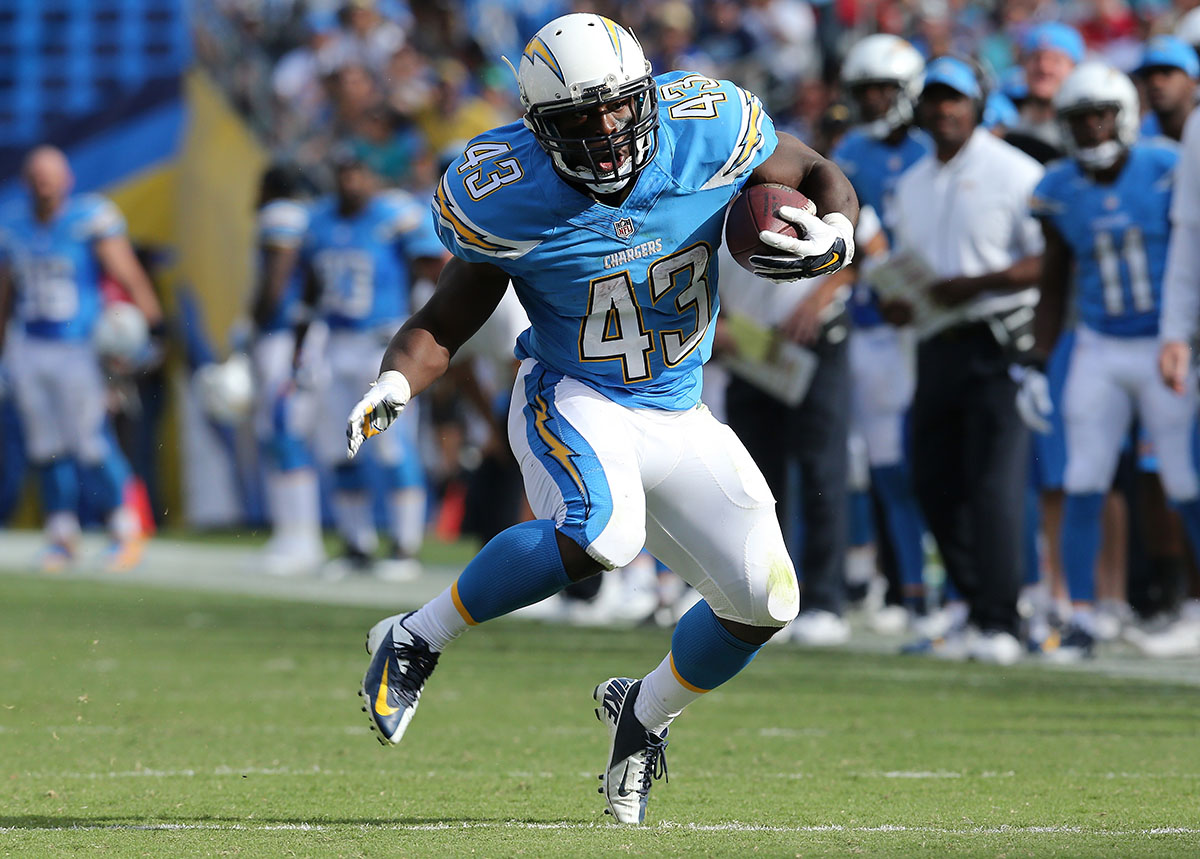 We’re a game or two away from the running backs in the 2015 draft leaving flaming bags of shit on Branden Oliver’s stoop. Oliver is just the latest argument for waiting on running backs until late in — or after — the draft. Undrafted out of the University of Buffalo, Oliver leads all rookie runners with 316 yards, almost all of which he’s racked up in the Chargers’ past three games.

Finding someone like Oliver is a welcome surprise, but he’s also the sort of spark the Chargers were desperately searching for in the run game. San Diego was the worst rushing team in football coming into its game against the Jets (who happen to have maybe the league’s best run defense). Oliver went for 114 yards on 19 carries against Mo Wilkerson and Friends, and three weeks later, the Chargers are all the way up to 27th in rushing DVOA. It’s still not great — but it’s better!

Wearing no. 43 and standing 5-foot-7, Oliver got the Darren Sproles comparisons instantly, but that connection doesn’t go very far. Oliver weighs almost 210 pounds, and San Diego has shown it’s willing to let him grind it out on the ground (he had 26 carries against Oakland). What he and Sproles do share is that each makes you sit up in your chair. Every Oliver carry has “holy shit” potential.

It’s rare that a player is exactly who he was projected to be as a rookie, but Kelvin Benjamin is there. Benjamin is a 6-foot-5 post-human with longer arms than most offensive tackles, but there were still some concerns about him around draft time. He just isn’t fast — 4.61 in the 40 — and doesn’t play any faster. A lot of big, physical receivers struggle with separation early in their careers, and Benjamin is that prototype taken to the extreme.

But here’s the thing about guys built like Kelvin Benjamin: Even when they’re not open, they’re open. I’m not sure I’ve seen Benjamin catch a ball all year without a puny cornerback hanging on him, and he still leads all rookies in receiving yards (477) and touchdowns (five), and is second in receptions (34) behind Watkins. There’s a chance his yards after catch is actually negative,1 but that doesn’t really matter if you’re already standing in the end zone. He’s a red zone monster. Watching Tramon Williams try to stop him down there Sunday was like watching a kindergartner climb a tree.

OK, it’s 57 — less than two yards per catch, and tied for 142nd in the league and seven yards behind Vikings tight end Rhett Ellison, who has five catches.

Sometimes, football is simple. Anyone who watched two minutes of Aaron Donald at Pitt last year probably knew he was better than every defensive player in this draft not named Jadeveon Clowney or Khalil Mack. But he’s small, and it was the ACC, and — ya know what … no. When a guy destroys an entire season the way Donald did last year, the rest of it shouldn’t matter. He was going to wreak havoc for whichever team drafted him, and seven weeks in, here we are.

Because the Rams are intent on driving their fans — and everyone else — insane, Donald was playing only about half the snaps for St. Louis in its first few games. Even in limited time, he was still ruining guards with regularity. He dumped Adrian Peterson about five yards deep in the backfield in the season opener, did something similar against the Bucs a week later, and has added one or two plays like that in every game since.

We knew he could get after quarterbacks (with 11 sacks in his Nagurski-winning season), but Donald’s real value is that he affects pretty much every play. He had a sack and two hits as the best player on the field for the Rams against Seattle, but his tackles for loss in the run game were even more impressive. He exists in backfields, whether by beating people with pure quickness or a little swim that I think he has to pay J.J. Watt royalties to use. He’s everywhere. Then again, we probably should have known he would be. 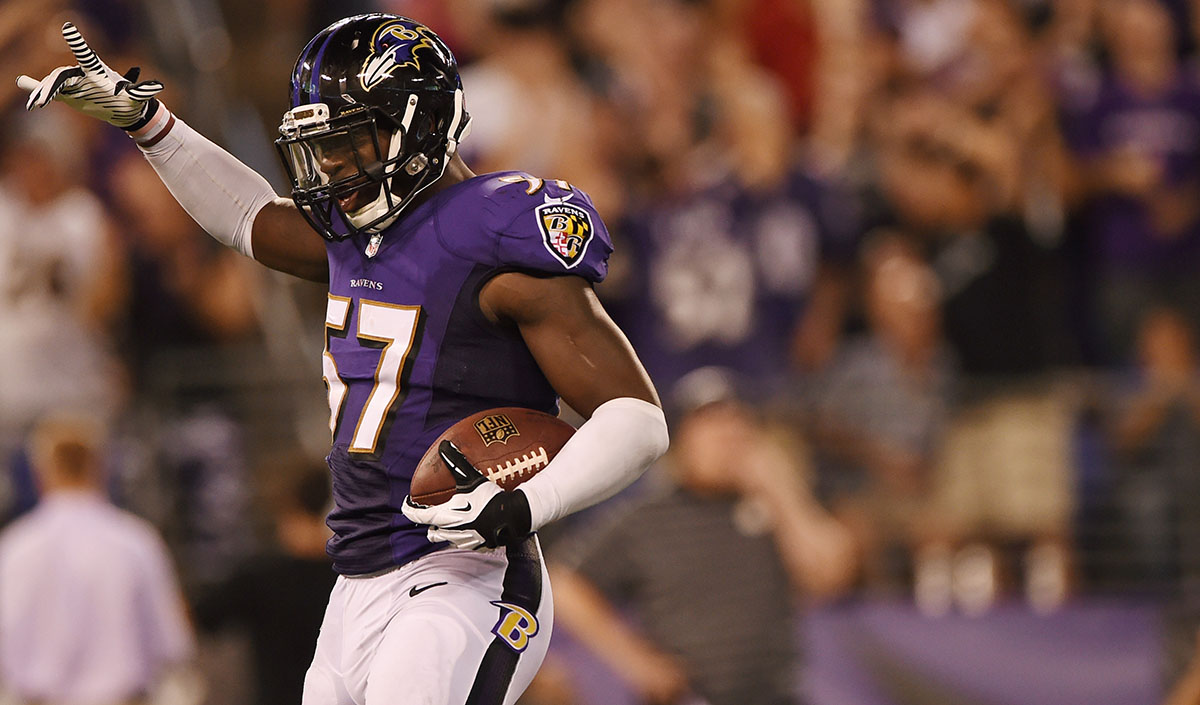 Here we are again, with the Ravens casually rolling out one of the best defenses in football every week. And right in the middle of it is C.J. Mosley. Even with a team that’s drafted and developed as well as Baltimore has the past 15 years, Mosley feels like an aberration. He walked off the stage at Radio City Music Hall and right into his spot as a starting inside linebacker.

He’s done a little bit of everything this year. No Raven has played more snaps on defense. He leads the team in tackles. He has one pick and five defended passes. He has more quarterback hits than Elvis Dumervil (who’s also playing great). Mosley is the Alabama linebacker everyone else thought they were getting in the first round. It already feels like he’s going to be in the middle of the Ravens defense until long after we’re all dead.

It’s not a stretch to say the Chargers had the league’s worst pass defense a year ago. Even a jump to merely being average has been impressive, and Jason Verrett has been a significant part of that. It didn’t take long, either. San Diego’s season opener against the Cardinals was still probably his best game, but the most telling one about what he means to the Chargers probably came last week. With Verrett sidelined with a shoulder injury (and Brandon Flowers out with a concussion), the Chiefs passing game had an easy day against the Chargers. Verrett returned to practice yesterday, which is big news for San Diego. It’ll need all the help it can get tonight against Peyton Manning.

E.J. Gaines was the other Missouri Tiger the Rams picked at the back end of this year’s draft, and he’s turned into one of the more unexpected contributors of the entire class. Gaines was the 188th pick in May, three spots before Bears punter Pat O’Donnell in the sixth round, and he’s quietly been a solid starter since the first week of the season. So far, he’s been the best player in their secondary.

Gaines had an excellent senior season for a top-10 Missouri team, including a game against Texas A&M in which he nearly blanked Mike Evans. His height, the length of his arms, and the amount of off-man coverage into the sideline played at Missouri were his pre-draft knocks, but he was a three-year starter who simply knows how to play. With him and Donald, the Rams could have done worse. 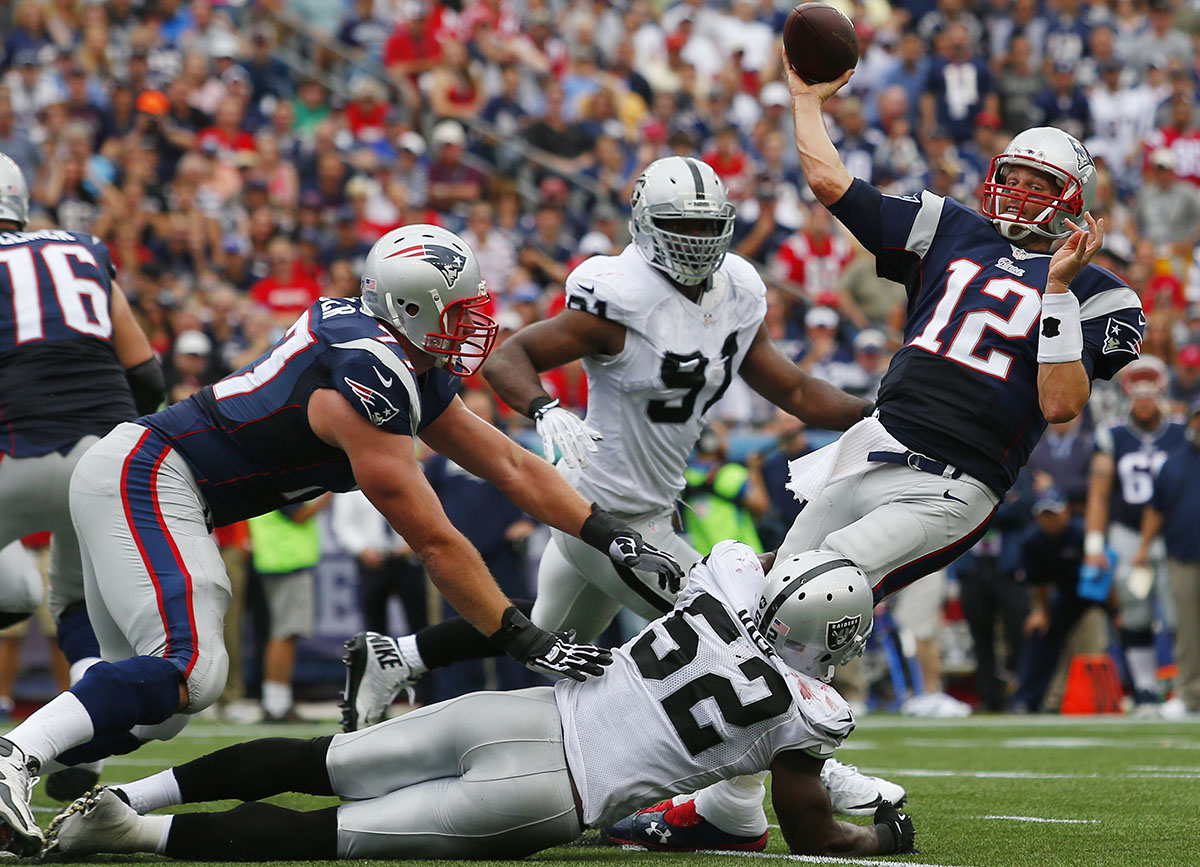 There was a play Khalil Mack made last week against Arizona that I watched probably a dozen times this week. He was playing outside linebacker on the right side. He does most of his pass rushing from that side, but the Raiders aren’t afraid to move him around.

Anyway, the ball was snapped, and Mack tore off the edge like he normally does. He’s not refined as a pass-rusher yet. It’s all speed and flailing and not a lot of nuance, but he already explodes off the ball like maybe three or four other guys on earth. He was about even with Carson Palmer when Palmer dumped the ball off to Andre Ellington, maybe a yard or two past the line of scrimmage. As Mack saw the ball leave Palmer’s hand, he shook Jared Veldheer aside and started tracking Ellington down as he moved upfield. Ellington made it about four yards before Mack made the tackle.

It wasn’t highlight-worthy. It was just the sort of play that only a handful of guys can physically make — going full speed one direction, stopping, chasing down a running back going the other. At the University of Buffalo, Mack often looked like he was on a different level, athletically, than everyone else on the field. As a top-five pick, he probably should have. That expectation isn’t there in the NFL, but the scary part is that Mack still looks like that. He’s constantly getting to ball carriers he has no business being close to. Even more frightening is that he’s started to add some refinement to all of that explosiveness and effort. Early in the year, teams couldn’t run away from him because he’d just chase the play down from behind. Now, he’s shedding blockers well enough that teams can’t run at him either. Just wait. He is going to be a serious problem.