Who will we remember from the 2014 men’s basketball championship game? Here are some suggestions.

12. Drake. First, Richard Hamilton’s caption to the Instagram photo above:

“Wit my family World Wide Wes and @champagnepapi at NCAA Championship Game. They Cheering for the other side so off wit their Hea #holdat #Uconn”

A couple of points:

What’s important to know is that Drake showed up to the NCAA title game, and it led to endless Drake jokes. This is why it’s always fun when Drake shows up to anything.

There were a lot of people who got angry with Derek as all this mushroomed on the Internet, but those people totally missed the point.

That email hits every note an unbearable RA could ever possibly hit. Whether it’s lectures about the stupidity of sports, or quiet hours and civility, or the spectacular “have fun, but not too much fun.”

Remember Derek the RA, and remember that UConn won last night, and that all of his words were definitely ignored.

10. The Tattoo Guy. We’ve talked about the Kentucky fan who got a “2014 National Champions” tattoo a month ago when Kentucky was in danger of missing the tournament, and he’s still a hero to me. Maybe his prophecy didn’t actually come true, but it turned into a story he’ll be able to tell for the rest of his life, which is really all you can hope for from a tattoo. Also: It’s for the best that his prediction didn’t actually come true, because if it had, Kentucky probably would have elected this man governor.

9. Julius Randle. Nobody in the world wanted him to have a monster Final Four more than I did. He’s so much fun to watch when he barrels into the lane and muscles in shots that have no business getting to the rim. And yet … sometimes it just doesn’t happen. It didn’t Saturday, and it didn’t Monday. His game is a strange blend of finesse and power, and when it works, it’s killer. When it doesn’t, it just looks awkward, and you wonder why he’s starting every possession from the 3-point line. Randle was the best draft prospect at the Final Four, and two games later, I still have no idea what he would look like in the NBA.

8. Jesus and all his friends. This was my first Final Four, and one of my favorite parts of the experience was seeing the various NBA players who showed up to show love. This meant walking through a tunnel behind Anthony Davis, or running into guys like Andre Drummond and Charlie Villanueva around the concourse.

It was especially crazy to see everyone from UConn. Even as John Calipari turns Kentucky into an All-Star Game pipeline, UConn can claim Kemba Walker, Andre Drummond, Rudy Gay, Richard Hamilton, Ray Allen, Emeka Okafor, Caron Butler, Jeremy Lamb, Hasheem Thabeet, Charlie Villanueva … The list gets a little dicey at the end, but still. Almost all those guys were here for one of the games this weekend. And seeing them all together made me realize a pickup game between UConn’s stars and Kentucky’s stars would be a lot more competitive than you’d think.

In any case, it’s always great seeing everyone from the NBA peppered throughout the crowd. Because it’s fun to imagine NBA millionaires reduced to helpless bystanders like the rest of us. Because it’s a reminder that these jerseys weren’t “just laundry” to them. (Sorry, Derek.) But most important, because of the celebration photos.

7. The Harrison brothers. We talked about this Kentucky team on Monday, and nobody personifies the team’s schizophrenic brilliance better than the Harrison twins.

They were massive disappointments for most of the year; in the past weeks they came up huge. But in every game they had stretches that would drive you insane all over again. Aaron Harrison struggled Monday, but Andrew came up with a handful of huge plays to keep Kentucky in it, and I have no idea what to think anymore. I’ll remember the Harrisons as baffling until the very end. Everything they did well, everything they did wrong, none of it made sense. Whether they come back next year or go pro, I look forward to them driving basketball fans nuts for at least the next few years while we all try to figure them out.

Getting on Twitter later also provided this perspective, which does it more justice than the actual video. Somehow he dunked this:

Most of Kentucky struggled Monday, but James Young was the one weapon it had that worked most of the night. People may forget that part, but nobody will forget the dunk.

5. Father and son. The three loudest cheers at AT&T Stadium this weekend: (1) Aaron Harrison’s shot, (2) UConn winning the national title, and (3) This duo dancing to “Happy.”

4. Nelly. Say what you want about the NCAA’s awful hypocrisy, or greed, or incompetence, or … Say what you want, but someone decided to play Nelly’s “Heart of a Champion” when UConn won, and it was glorious. We got four minutes of the NBA on NBC sample, Nelly rapping about victory, and everyone pretending it was normal. I hope this becomes the new championship anthem for an entire generation.

3. John Calipari. He lost Monday, and he blamed himself in the press conference afterward, but he’s ranked this high for a couple of reasons. First, because the past month or so is probably the most impressive coaching job he’s ever done.

Second, because he and his team made this Final Four a lot more fun. Especially Monday night. Maybe it could’ve been that good with Wisconsin, but I don’t know. Adding Calipari and 60,000 crazy Kentucky fans raises the stakes for everything.

Finally, because it’s 2014. Calipari is a coach we should all be celebrating. The Kentucky run the past month will help catapult guys like the Harrison twins, Dakari Johnson, Willie Cauley-Stein, Randle, and Young further up draft boards. Either this year or next year. Whether you agree with the idea of teams drafting them is irrelevant. Some team will remember this NCAA tournament and take a chance earlier than it would’ve, the same way teams did with guys like Brandon Knight, Daniel Orton, and Marquis Teague.

This is what Calipari does. He puts guys together, coaches them up as the year unfolds, and eventually it makes everyone look better. Or at least that’s the goal.

Maybe it isn’t about education or integrity or any mission loftier than winning now to improve draft stock later, but in an era when we’re all basically aware the NCAA’s lofty ideals are part of a giant scam, Calipari and his Kentucky program are probably the most honest things we have in college sports.

This has been true for a few years now. The real reason Calipari’s ranked this high is because this Final Four run made him and his methods that much harder to criticize. He’s now been to three Final Fours in four years. Kentucky may have lost Monday night, but even the stupidest critics aren’t stupid enough to think this system isn’t working.

2. Kevin Ollie. Should he go coach the Thunder? The Lakers? Run for U.S. Senate?

For all the praise we just gave Calipari, nobody in coaching is more impressive than Ollie right now. It’s kind of fascinating to think about what happens next. He could go to the NBA next year and take over a team like the Lakers (HORRIBLE IDEA), he could wait a year or two until a job opens someplace like Oklahoma City (better idea), or maybe he just stays at UConn and this year becomes the start of something much bigger.

I think I vote for UConn. NBA coaches are disposable almost by definition, and Ollie’s too much fun to become the next Scott Brooks. It’s not that he can’t do the job, but wouldn’t it be cooler to have him turn into a peer of guys like Jim Boeheim and Coach K?

He’s not on that level yet, but he also wasn’t supposed to be in the conversation for at least a decade. We are way ahead of schedule right now. 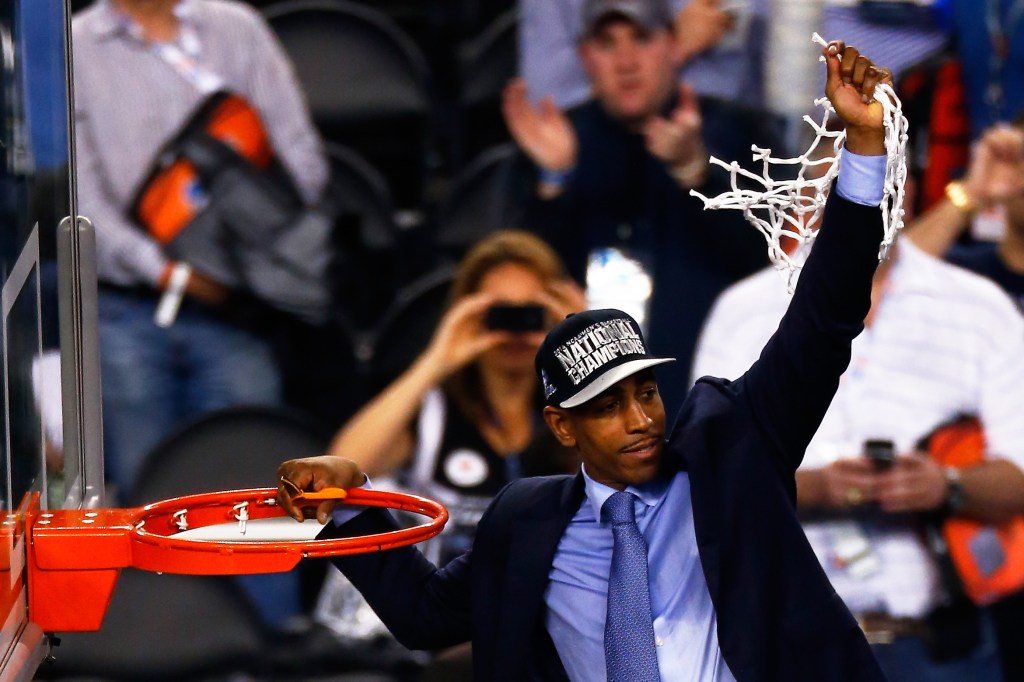 1. Shabazz Boatright. We could talk about them separately, but separately, they both have their own weakness.

Together, they are gods.

Napier and Boatright controls both ends of the floor. Reminders of Bibby and Simon. That good!!

I wish they could play together forever. We could blend them into one roster spot for a player named “Shabazz Boatright” and just watch them wreak havoc for the next 10 years.

Even if we don’t get that, the past few weeks were good enough. For some reason I spent the past two days talking about how Kentucky’s guards were twice the size of Shabazz and Boatright, thinking this helped Kentucky. All that size difference did was make it that much harder for anyone in blue to stay in front of Boatright and Shabazz.

They both hit huge shots all night. Every time Kentucky would get close to digging out of the deficit and taking a lead, it seemed like one of them would step up with a jumper to extend it. There were other stars for UConn — DeAndre Daniels was huge all tournament, and Niels Giffey came up big Monday — but nothing was as much as fun as Shabazz and Boatright.

There was a point near the end of the game when UConn was running out the clock, and one of them was just weaving in and out of the defense while a helpless Kentucky team flailed in the jet stream. This is what happened for most of the NCAA tournament. They were a nightmare for everyone.

There are other reasons to love them. Boatright suffered through a stupid eligibility scandal last year and the death of a cousin earlier this year, and in the past few months he’s become more unselfish and dependable than he’d been in his entire career. Meanwhile, Shabazz was the face of this UConn team and eventually the NCAA tournament. And then when it was time to do interviews, the face of the NCAA tournament started calling out the NCAA.

Everything Shabazz and Boatright did for the past three weeks has been legendary.

There could be no better no. 1. 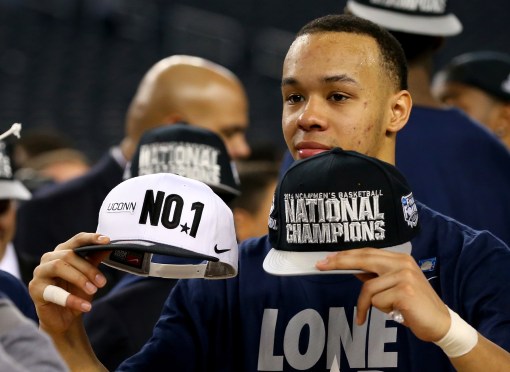