Southampton are just showing off at this point. They sit third in the table, only one point behind Manchester City. The Saints laid an eight spot on hapless Sunderland on Saturday, powered by an absolutely mouthwatering, four-assist performance from Dusan Tadic.

The eight goals will grab the headlines, but don’t sleep on how tight Southampton’s defense has been. They’ve given up only five goals this season — stingiest in the Premier League. Their back line has been so good that even without those eight goals on Saturday, they’d still have the third-best goal difference in the Premier League. As it is, sporting a nicely bloated plus-14 puts them second, behind Chelsea’s plus-15. And each week the Saints don’t fade ratchets up the pressure on the presumed contenders for the top four. So with Southampton delightfully overstaying their welcome near the top of the table, it’s time to ask: How alarmed should the rest of the Champions League contenders be? 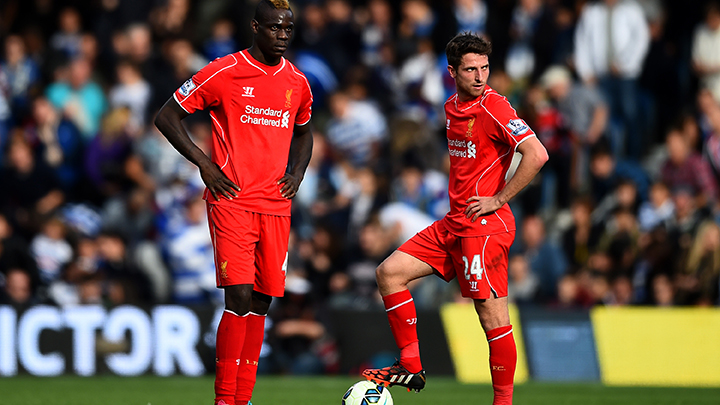 A 3-2 win, on the road against struggling Queens Park Rangers, might seem like a sign that last season’s rampaging Reds are resurfacing. Except this wasn’t an entertaining track meet — this was an hour of Liverpool, once again struggling to create good chances before finally scraping an own goal off a quick set piece.

The end of this game was about as chill as a Hungry Hungry Hippos feast. It’s hard to call Liverpool’s performance a high-scoring success when they really scored only one of their goals. Mario Balotelli struggled again in Daniel Sturridge’s absence, and Brendan Rodgers’s effort to shake things up by moving Steven Gerrard up the field (out of Gerrard’s usual holding role) was enough of a failure that Rodgers abandoned the idea at halftime.

Liverpool’s scoring woes and defensive lapses don’t seem to be going away. Some of this is down to injuries (Sturridge), and you could chalk up this weekend’s somewhat odd team selection to Rodgers wanting to keep his players fresh for this week’s Champions League clash with Real Madrid. Ultimately, three points is three points, and Liverpool are in fifth place, behind West Ham on goal difference. Things could be worse.

Now those are alarm bells. 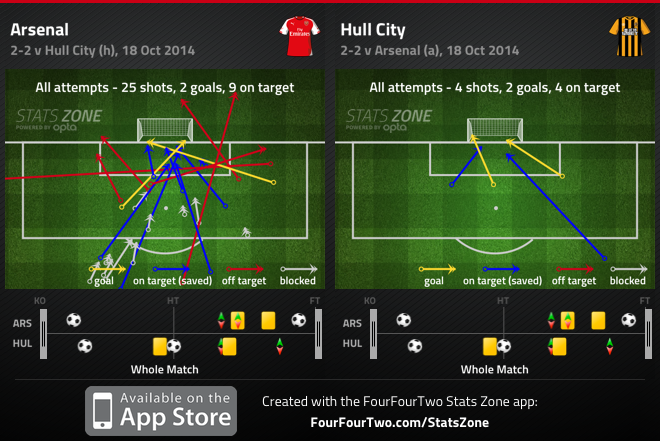 This really isn’t the shot chart of a team you’d expect to drop points. But then again, Arsenal have a funny relationship with expectations.

Once again, the Gunners drastically outshot an inferior opponent and still managed to drop points. This time it was Hull, who managed to draw with Arsene Wenger’s side, at the Emirates.

Sometimes teams will have issues in attack, sometimes they’ll have some problems defending. The key is to not have both at once. Right now, Arsenal’s back line is writing checks the team’s defense can’t cash. It’s one thing to be unlucky; it’s another to have issues creating good chances. But Arsenal started a thrift-store defense against Hull, made up of Nacho Monreal in the middle (he’s a full-back) and Héctor “I Make Calum Chambers Look Like a Seasoned Vet” Bellerín at right-back.

Worry level: You’ve had that cough for like a month now. Maybe you should see a doctor.

Tottenham probably played better than their Champions League competitors this weekend. They just had the misfortune of doing so at the Etihad, against Manchester City. Spurs conceded three penalties and were awarded one of their own, in a record-setting refereeing performance.

4 – This is only the second game in PL history to see the award of four penalties (after Bradford v Derby in 2000). Bonanza.

That some of those penalties were questionable shouldn’t get in the way of such a fine, fine officiating accomplishment, nor should the footnote that two of the penalty shots were missed. Eventually, Spurs will have to stop taking moral victories from these encounters and start taking actual points. But after a year of utter capitulation in games against strong/stronger opponents, they get some time to walk before they run. Tottenham’s attack looked coherent against City, which is probably the first time that’s been the case in the post–“give it to Gareth Bale” era. And City’s attack makes lots of defenses look silly.

What lost season?! An easy win at home against a truly bad Aston Villa side isn’t exactly something to write home about, but it sure beats the alternative. The importance of getting Séamus Coleman, Ross Barkley, and James McCarthy back on the field at the same time can’t be overstated. There are very few full-backs in the world who get into the attacking positions Coleman does. Outside of Dani Alves, what defender reliably gets to the back posts to finish crosses like this?

Everton can’t undo two bad months with one routine win. But sitting in 13th, two points behind Spurs and Arsenal, is way better than sitting in 17th, two points off the relegation zone. After a string of bad performances and injuries, this feels like a bit of a course correction.

Worry level: No, I didn’t study for the history test, but whatever, man — I wasn’t planning on going to college anyway.

They’ve played such an easy schedule, it shouldn’t be surprising that they could be in fourth with a win against West Brom on Monday. But considering all the drama, transfer spending, and comedy defending, things could be worse.