Another week, another shocking result in the Premier League, as the teams enter the home stretch, approach the sharp end of the season, and otherwise cliché their way toward season’s end on May 11. This weekend had lots of results we all expected and one we really, really didn’t. So, as we look for some takeaways, there’s really only one place to start.

The Adventures of Jose and Jozy

The idea that Jozy Altidore might materially impact that race for the Premier League title is patently insane. Altidore hadn’t played a minute of Premier League football in almost a month for Sunderland, and really, it was no more than he deserved. He’s had exactly one goal and one assist all year for a team that, before last week, seemed certain to be relegated. But there he was on Saturday, slipping/falling/getting kinda maybe fouled in a moment that set fire to any remaining title hopes Chelsea were clinging to. (The penalty, rather poetically, was converted by Liverpool loanee Fabio Borini.)

The penalty gave an incredibly unlikely lifeline to Sunderland in their quest to not drift away into the ether of the championship. And while it’s not exactly Clint Dempsey for Fulham, if Sunderland do manage to stay up, it will be impossible to overstate the importance of that goal.

For Chelsea, Jose Mourinho’s home unbeaten streak ends at a whopping 77 games. And he was not happy about it. As is always the case with Mourinho, he took about 16 seconds to turn the focus of the narrative from the game to his postgame comments, engaging in his typical (although not particularly inaccurate) blaming of referees. But it’s hard to escape that, in the last six Premier League games, Chelsea have now lost to Sunderland at home and Aston Villa and Crystal Palace on the road. Win any one of those three matches and they’d be within striking distance of the top; win two of them, and they’d have attained that mythical status of “controlling their own destiny.”

As it is, Chelsea will have to wait for next year in the Premier League, where astoundingly there’s at least a chance they’ll meet Sunderland again.

The two Liverpool-based teams notched unsurprising victories this weekend, with Liverpool beating Norwich City 3-2 and Everton topping Manchester United 2-0. That, in and of itself, is pretty darn shocking. For Liverpool, Brendan Rodgers tweaked the tactical system to terrific effect yet again. With no Daniel Sturridge and Jordan Henderson suspended, Steven Gerrard once again played at the base of the midfield, this time with Joe Allen and Lucas ahead of him. Philippe Coutinho, and new, new, new, great young English hope of the season Raheem Sterling (who’s taken the mantle from Ross Barkley and Andros Townsend) played off Suárez. Like everything Rodgers does these days, it worked, with Sterling notching two goals and this gorgeous assist to Suárez:

That they let in two goals is just another curious case of Liverpool being Liverpool at this point (or is it Liverpool: Being: Liverpool?). Liverpool are what they are: an incredibly open, incredibly entertaining, high-octane team. And they’re probably going to win the league.

Their crosstown rivals also put in a ho-hum day at the office to this weekend. And it speaks volumes that the team they casually dispatched 2-0 was Manchester United. There was no fanfare, there were no tense moments. Just Everton coolly and calmly putting down a team that wasn’t as good as they are. Much as they did against Arsenal, Everton was happy to let United have the ball for long periods of the game and then whack them with beautifully constructed counterattacks. According to Squawka.com, United had 55 percent of possession, but obviously they didn’t use it nearly as well. 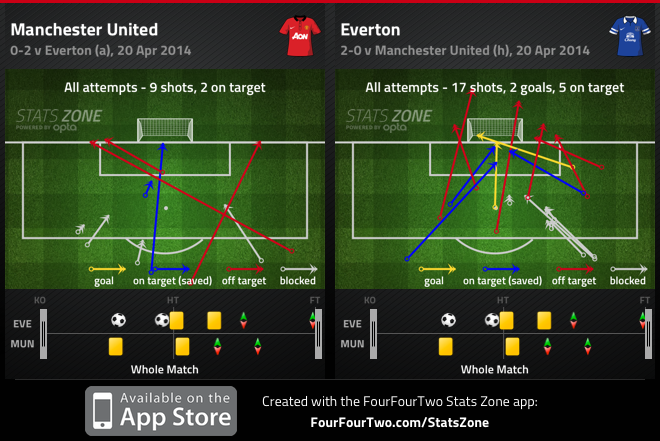 Really, though, neither Liverpool’s high-adrenaline win nor Everton’s more mundane performance are particularly notable. And that in itself just shows how far the alignment of planets has shifted over the course of this Premier League season.

Arsenal finally had both Aaron Ramsey and Mesut Özil fit enough to start, and they did awesome Ramsey and Özil–type things like this.

And for approximately the 7,352nd time, Arsene Wenger and Arsenal nation wondered what if. What if they had been healthy the whole season? What if either player had a viable backup who wasn’t Jack Wilshere? What if Arsenal had just a little bit more? Meet the new Arsenal, same as the old Arsenal.

The Defenders of Midtable

Liverpool are trying to prove that defense is not, in fact, what wins championships. But further down in the table, West Ham Crystal Palace are proving that, while that may be true, defense is crucially important to avoiding relegation. Noted 19th-century football specialist Sam Allardyce at West Ham and noted Premier League Lannister Tony Pulis (Crystal Palace’s boss) have taken Championship League–caliber teams and turned them into midtable Premier League success stories. And each team could have important spoiler roles left to play over the end of the season.

West Ham will close this year’s season with a trip to Manchester City. And while City aren’t terribly likely to catch Liverpool, they are the only team left for whom it’s at least possible. They need to win out, which means breaking Big Sam’s defense on the final day of the season.

The Lannister-led Crystal Palace have an even more influential run in. Having already taken a broadsword to Everton’s Champion’s League hopes last week, they host Manchester City and Liverpool over the next two weeks before finishing their season against Fulham, who will be locked in the death grip of a relegation battle.

Realistically, if the Premier League title has any drama left in it on the final day of the season, it will be because Chelsea get a result against Liverpool next weekend, and Crystal Palace visit their own version of the Red Wedding upon Liverpool a week after that. Thus ends your obligatory Grantland Game of Thrones referencing.