The Wizards’ season ended last week, but that doesn’t mean we’re done here. We need closure. I need closure. The past month was too much fun, and the future is too uncertain. So before we put this Wizards team in the past, it’s time for one more purge of emotions and anxiety.

Per usual, these are two voices in my head. If you don’t care about the Wizards, you should probably just go read another article about the actual playoffs. Everybody else? Let’s do this.

BELIEVER: It’s over. I can’t believe it’s over.

HATER: I have a question.

Could there be anything sadder than a mediocre team that goes on a fluke playoff run, finds the most success it’s had in 35 years, but also reads too much into that success and guarantees that the team stays mediocre forever?

No. Please don’t start this.

I’m just saying. That’s how we could remember this, right?

No, Hater, that’s not how anyone will remember this. That playoff run was too amazing. The whole season was too amazing. None of this was supposed to happen. Remember when Okafor got hurt in September and the whole NBA gave up on us? Remember when we started 4-8 after the Gortat trade and the only thing fans could cheer for was the top-12 protected pick we sent Phoenix?

That wasn’t it, either. Beal got hurt, and there were worries that he would miss the whole season.

And we all found out that Randy Wittman thought the best way for Beal to recover from last season’s stress fracture was to play him the most minutes of anyone in the league. And now Wittman’s comin—

But Beal came back! And the season wasn’t over.

The season wasn’t over because we were playing in the worst Eastern Conference ever. And the Wizards were still a mess. Remember when it took them seven games to finally get over .500?

Remember when the Bulls were dominant all year? Who gives a shit about the regular season?

It’s just important to remember that as much fun as the past month was, this team still underachieved all year long. They were locked in a battle for the sixth seed with the goddamn Bobcats, and THEY LOST. They blew two head-to-head games in three weeks. If the world were fair, the Wizards would’ve been the seventh seed that got swept by Miami.

You are such a hater.

I’m not, though. The playoffs were amazing, don’t get me wrong. I still can’t believe that just happened. We just watched Marcin Gortat spend three weeks becoming the cult hero of the NBA.

YES. Let’s talk about Gortat. We can agree on Gortat. The sideline “F— YEAH,” the pregame motivational movie quotes, monster playoff games, educating Shaq about pierogies and his “Ab Lincoln” beard. Everything.

During one of the Pacers games, the announcers told a story about his dad. His dad was an Olympic boxer for Poland. He told his Marcin he’d won more medals by the time he was 18 years old than all the medals Gortat would win in his whole life.

So Gortat starts playing pro, and when he comes home to Poland, he shows his dad a check for $300,000. He says, “In this check I will make more money than you have in your entire life.” And then Gortat’s dad just goes off and punches him in the stomach.

I love Gortat so much.

I love his dad so much.

In a way, Gortat personified this whole team the past month. He was goofy, he was fearless, and it all sorta took on a life of its own. Watching him take over the NBA for a few weeks was one of the best stories of the playoffs. Definitely the weirdest.

The flip side is that Gortat’s 30 years old. This is probably where he peaks, right? He’ll get paid, maybe get injured, definitely get slower, and pretty soon it’ll be time for him to start looking at a run for Polish president. If you’re looking at it logically, things probably won’t be as good for Gortat as these past few weeks ever again. If Washington commits to him and Ariza this summer, you can probably say that about the Wizards for the next few years, too.

Wrong. Wall and Beal will get better …

But so will the East. The Nets aren’t going away as long as they have Prokhorov, the Raptors will be better, the Bulls will get Rose back and have room to add someone else once they amnesty Boozer. Stan Van Gundy will turn Detroit into a playoff team, the Pacers and Heat should be at the top again next year. The Celtics could land Kevin Love in the next few weeks. The Wizards are worse than ALL THESE TEAMS.

This is why they need a coach who makes them better. This is why they need to save cap space for a player that actually lets them compete with all those teams. They can’t keep Ariza, because they already gave his money to Martell Webster. And what’s the point? Even if they bring everyone back from this past year, they’re probably getting worse.

Well, this is getting depressing.

Yeah. The worst part of that apocalyptic weekend against the Pacers was reality setting in. Wizards fans had just gotten a taste of how the other side feels. What it’s like to root for a team that actually makes all the plays, makes other teams look hopeless and awful, and has a different star step up every night. Then it was like, “NOPE, that’s not really your team, here are the Wizards again, scoring 63 points in a playoff game and blowing a 17-point lead in the second half.”

I’m getting PTSD just thinking about that.

Why are you ruining all this?

This playoff run turned everyone — players, fans, media, management — into a bunch of kids. That’s why they were great. We all just turned our brain off and went with it. The only people worrying about the future during all this were the worst kind of people: adults.

Sure, adults are horrible.

But now that it’s over, I have zero faith that anyone managing this team will act like an adult and detach from what just happened.

Now they’ll bring back Wittman and all the inconsistency that comes with him and tie up salary in veterans who will only get worse, and it’ll be on Beal and Wall and Otto Porter to get so much better that it doesn’t matter. Those two weeks when the Wizards looked like an actual good team? Probably going to keep the Wizards from ever actually turning into a good team.

But can you really blame them? Would you rather your favorite team were run like a hedge fund, where everybody’s an asset, and you get rid of them as soon as there’s a chance to max out somewhere else?

Are you sure that’s how hedge funds work?

I have no idea. But you get the point. Maybe it’s not so horrible to have people in charge who act like humans.

Whatever you have to tell yourself.

Here’s what I’m actually telling myself, hater. It doesn’t matter. The Wizards are at a crossroads after these playoffs, they’ll probably screw this up, whatever. I know. It would be insane to bring back Trevor Ariza, and they’ll probably do it anyway. They shouldn’t bring back Wittman, but that’s happening, too. And I don’t care.

Great. So … could there be anything sadder than a mediocre team that goes on a fluke playoff run, finds the most success it’s had in 35 years, but also reads too much into that success and guarantees that the team stays mediocre forever?

Sure, being a fan of that team would be sadder. At least to some crappy adult who doesn’t understand sports. But I think you’re missing the point. Maybe the history of the Wizards franchise proves that being a sports fan is an insane way to spend your time and energy, but this year’s team is why it’s worth it. Because sometimes you fall into an awesome team, everything clicks, and you get to just turn your brain off.

That’s worth three years of Wittman and Grunfeld?

No idea. All I know for sure is that sports fans can’t control what choices their team makes, but they can always choose what to focus on. And I’m going to be laughing about this playoff run for the next 20 years. Drew Gooden was raining jumpers from 20 feet. Andre Miller was playing 15 minutes a game as the best offensive player off the bench. Gortat took over the Internet, and Bradley Beal turned into the best young shooting guard in the NBA.

At the start of this year we knew Beal and Wall needed to see the playoffs, but everyone else did, too. D.C. needed to remember how much fun it is to actually win games that matter. Now the Wizards might actually get on national TV a few times next year. Superstars around the league will respect Wall and Beal. For the first time since Gilbert Arenas brought guns to the locker room, this team actually mattered to people.

But that fluke stretch of euphoria is why it matters for Ted Leonsis to get this right. A team that’s actually good could make that feeling last for five years instead of three weeks.

Sure. But you know what? This will be fun regardless. This WAS fun regardless. Everybody knows what the Wizards need to do to be a contender. Get rid of Ariza, get a new coach, etc. But more than anything, they’ll have to get lucky with another superstar in a few years. Otto will have to turn into a full-time starter for any of this to work. Wall and Beal will have to turn into perennial All-Stars. This will all take time.

I don’t even know what you’re saying anymore.

I’m saying we have no control, hater. We can be miserable obsessing over a championship that’s not coming for a few years at best, or we can appreciate a team that’s awesome across the board. We can get ready for John Wall and Brad Beal to take over the world next year. We can laugh at another year on the Wittman roller coaster. We can go all in on THE OTTO ERA. We can frame this picture of Wall and Beal Eiffel Towering Kirk Hinrich’s dignity. It’s always Wizards against the world.

Sports are so stupid.

The Wizards are so stupid. But I grew up with Rod Strickland and Gilbert Arenas. This team’s not supposed to make sense. If you want a smart team, go root for the Celtics or something. Or the tanking Sixers. The Wiz will shine regardless. 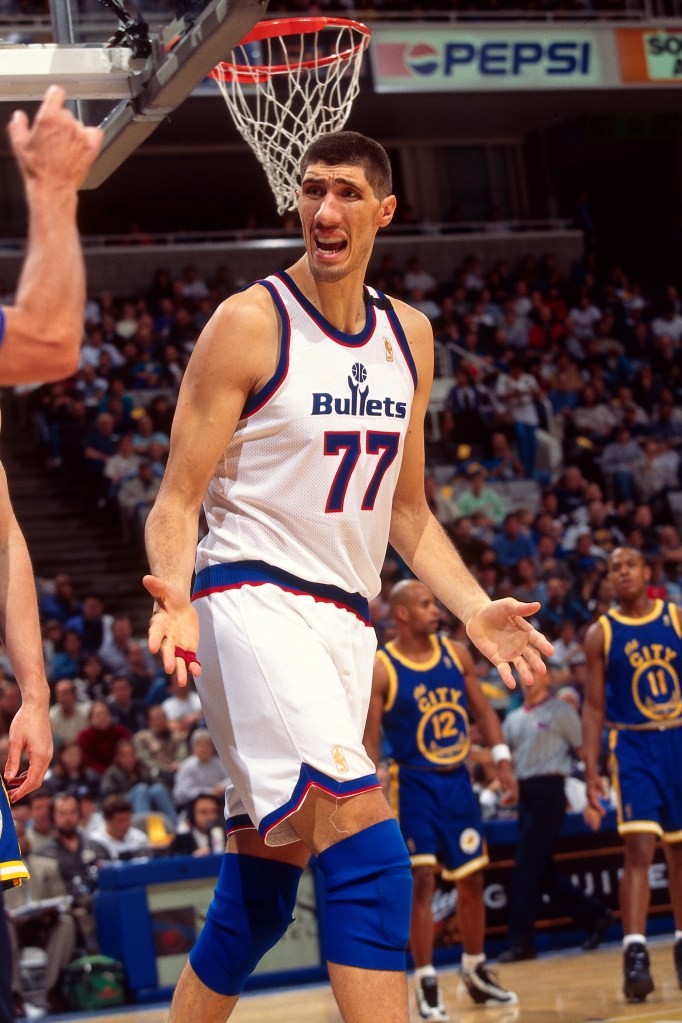 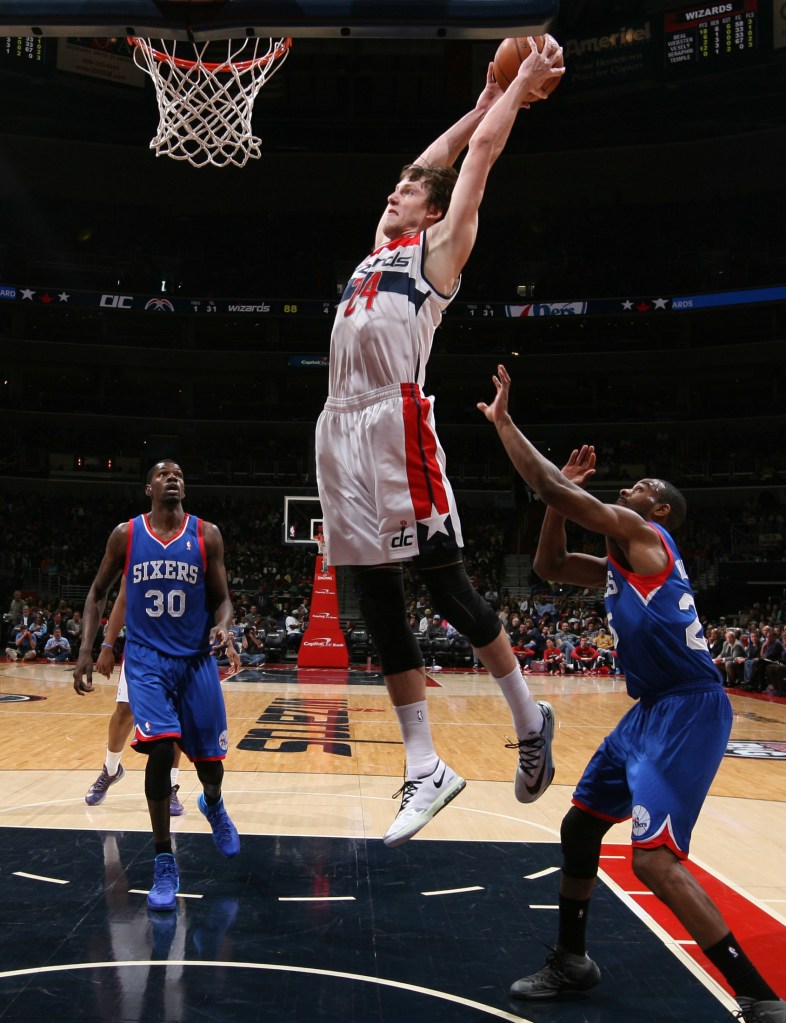 Darvin Ham all up in your face. 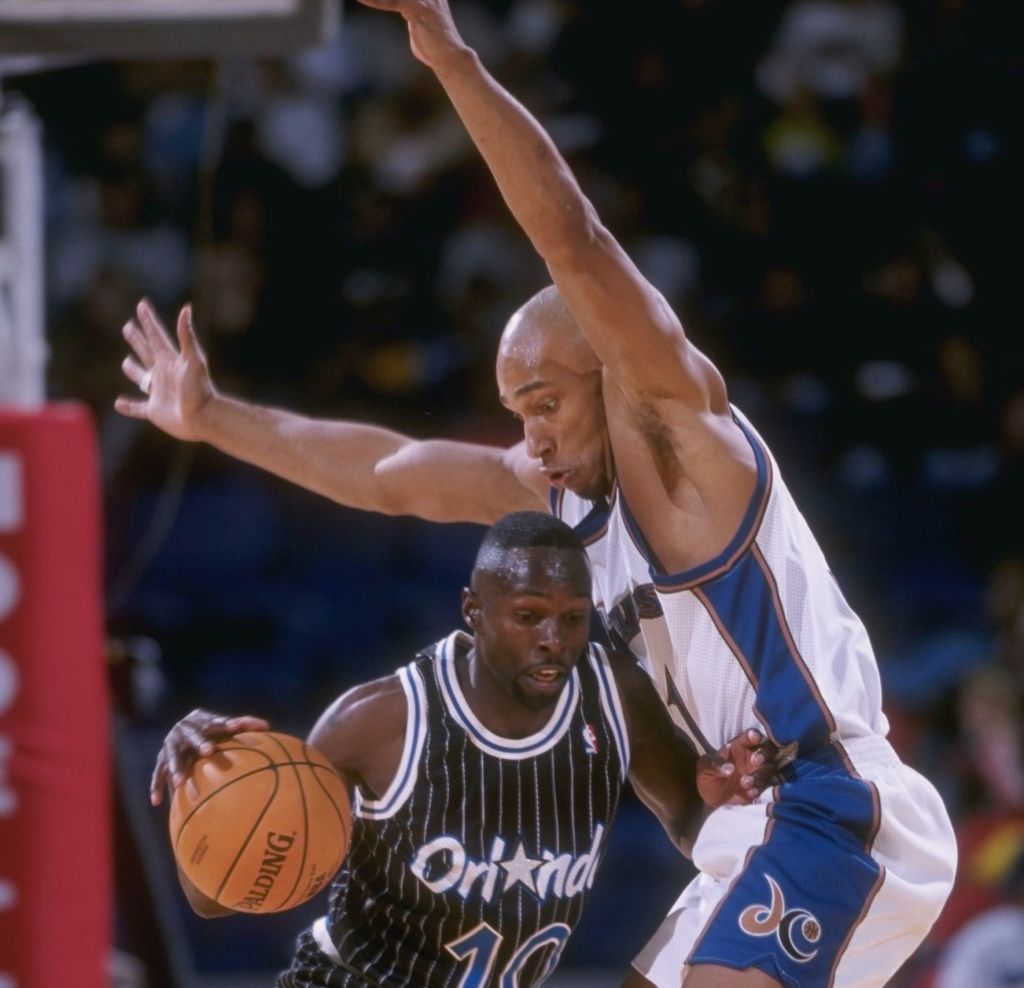 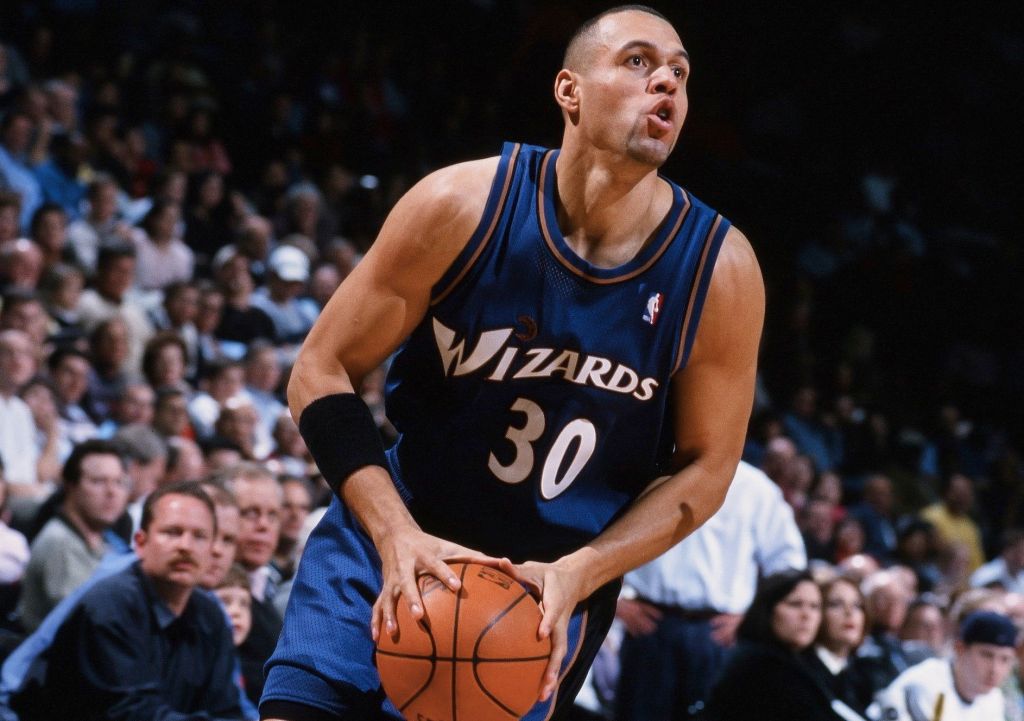 Kwame till the casket drops. 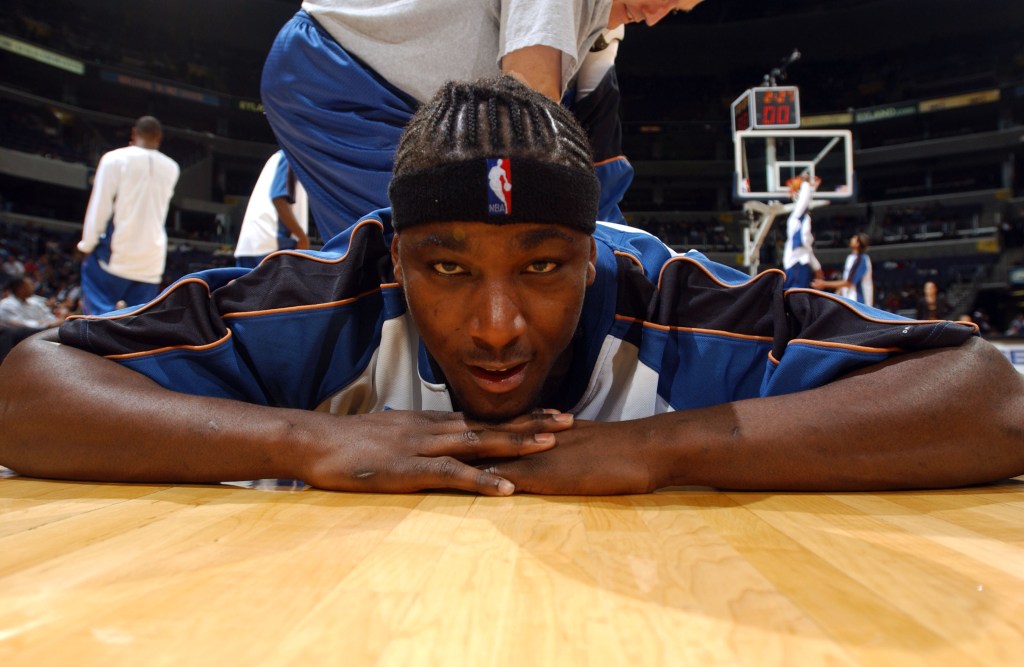 You’re right. That’s what this team did to me for the last nine months. And I still have no idea what that season was or how it happened. All I know is I can’t wait to do it again next year.