You always hate to see teammates collide, but at least you know their coach will be supportive and … oh.

The 66-year-old Lapointe had his number retired by the Canadiens this week, which gave him an opportunity to reminisce about the pranks he used to pull back in the ’70s. I love this old stuff. You have to scroll a bit, but you eventually get to some great stories about Lapointe victimizing everyone from Scotty Bowman to Ken Dryden to the Canadian prime minister. There’s even a story about a stolen car that involves the police. Guy Lapointe was the best.

This is the weekend that the Hockey Hall of Fame finally rights a longstanding wrong and inducts longtime coach Pat Burns. A grizzled ex-cop, Burns never played professionally in the NHL or anywhere else, but he had a family member who did. That would be his cousin, and this week’s obscure player, former Penguins and Scouts winger Robin Burns.

Robin came up through the Canadiens’ system in the 1960s, but never played a game in Montreal thanks to a stacked Habs’ roster. Expansion presented him with an opportunity to finally crack the NHL, and he was sold to the Penguins shortly before the 1970 season opener. He made occasional appearances in Pittsburgh over the next four years, playing just 41 games without scoring a goal, before getting his big break in 1974 when he was claimed by the Kansas City Scouts in the expansion draft. He’d play two full seasons as a Scout, scoring 31 goals; his NHL career ended in 1976, when the team moved to Colorado and became the Rockies.

The Rockies, of course, went on to become the New Jersey Devils, and in 2003 Robin’s cousin Pat won his first Stanley Cup with the franchise. Robin served as Pat’s agent for much of his career, and in 2010 he was one of the featured speakers at Pat’s funeral.

Heading into last night’s game against the Kings, Anaheim’s line on the NHL standings page looked like this:

That last column refers to their current streak. Which is a problem, because as we mentioned earlier this week, there is no such thing as an OT streak. Teams don’t “OT” three straight. They win or they lose, and Anaheim had lost three in a row. Those losses happened to have been in overtime or the shootout, which means that the Ducks got a point, but they were still losses.

But when it comes to streaks, the NHL insists on treating regulation losses and OT/SO losses as completely separate things, which is ridiculous. And it’s how you get a line like this, from today’s standings:

That’s the Blue Jackets, showing a two-game losing streak, when as any Columbus fan could tell you, the team has actually lost nine straight games. But because one of those losses came in overtime, the league hits reset on the entire streak.

Needless to say, wins aren’t handled this way. The Islanders have won four straight: two in regulation, one in overtime, and one in a shootout. They’re listed as having a plain old four-game win streak. Which they should, because wins are wins and losses are losses.

And yes, this is obviously all about the stupid loser point, which makes some losses worth more than others. The league doesn’t even have the deceny to use “OTL” for overtime loss. It’s just “OT.” Did they win or lose? Who can even remember?

It’s just another small way that the NHL uses that dumb concept to make everyone feel happy. Long winning streaks for the hot teams! Short losing streaks for the cold teams! Nobody’s doing that badly and almost everyone is over .500, so get your season tickets today, because we can all be winners!

We already have enough columns in the standings to deal with the existence of the awful, terrible, embarrassing loser point. We don’t need it factored into a concept as simple as streaks.

This week, Don Cherry lashed out at his new corporate masters, and things got awkward.

In past years, Coach’s Corner was supposed to be six minutes, but it usually ran long by a minute or two when Cherry would get in a groove. This year, Hockey Night in Canada’s first under the management of telecom giant Rogers, the segment has been limited to five minutes, and it’s a firm five minutes.

Cherry’s complaints about his lack of time have been a recurring theme for years, right up there with mispronounced names and occasionally yelling “Point!” for no good reason. But on Saturday, he took it to a new level, sarcastically asking if he was out of time less than a minute in and referencing the issue constantly.

It was a fascinatingly passive-aggressive performance, and even led to speculation that he was trying to get himself fired. (He was not fired).

This will probably all blow over soon enough, but it leads to an important question: If you’re Rogers, don’t you now have to take this opportunity to mess with Don Cherry? Don’t you need to cut his segment length by 10 seconds every week for the rest of the reason without telling him, just gradually enough that he doesn’t notice? Shouldn’t somebody in wardrobe have to start shortening his jacket and shirt sleeves by a half-inch every few days? Maybe lower his chair slightly each week? Dim the lights a tiny bit?

Whatever you think of the show, tell me you wouldn’t drop everything to tune in for Coach’s Corner in April, when the segment is two minutes long and features a confused Cherry sitting chest high behind a desk in the dark while wearing a tank top with French cuffs around the armpits.

Make it happen, Rogers. You owe it to a nation.

The Hall of Fame class of 2014 has been fairly well represented in this section over the years. We’ve broken down Mike Modano’s infamous stretcher incident and a classic Dominik Hasek meltdown. We had a Pat Burns temper tantrum aimed at referee Bill McCreary, who also showed up in the clip of linesman Ron Asselstine destroying an invading fan.

That leaves us with Rob Blake and Peter Forsberg from this year’s class. A quick search reveals that Blake never did anything funny on YouTube unless you count spearing Corey Perry in the pills (which I do). So that leaves Forsberg, who earns this week’s honors with this clip of the moment he was drafted.

• So it’s June 22, 1991, and we’re coming to you from beautiful Buffalo, New York. The big news of the day has already happened, with Eric Lindros going first overall to the Nordiques but refusing to put on their jersey. Now the Flyers are up with the sixth overall pick. And as it turns out, they have their eyes on a Swedish kid.

• Our TSN hosts are Bob McKenzie, looking young and dapper, and John Wells, who for some reason appears to be riding a stationary bike.

• Speaking of TSN personalities, did you know that current analyst Aaron Ward was taken one pick ahead of Forsberg? If you did not know that, it’s because you’ve never spent 15 seconds talking to Aaron Ward.

• McKenzie introduces us to the Flyers’ dilemma: They want to take Peter Forsberg, but it may be too early. If they can’t trade down, they may go with a defenseman like Richard Matvichuk instead. Call me crazy, but I feel like there’s a right answer here.

• Meanwhile, everyone else wants to trade up to take Alek Stojanov, whom McKenzie describes as “a potential 30-goal, 300-point man.” I’m assuming he misspoke, although this was the early ’90s and John Cullen had just put up a 110-point season, so you can’t be too sure.

• By the way, Stojanov ended up going with the next pick, to Vancouver. His career totals: two goals, seven points. Drafting is hard. (He was also traded straight up for Markus Naslund. Trading is also hard.)

• Wells makes a passing reference to the 1990 draft, a top-heavy class that featured very good NHLers going with seven of the first eight picks. Somewhere, an Islanders fan just punched the cardboard cutout of Scott Scissons that he keeps handy for exactly that purpose.

• We hear an announcement that it’s time for the Flyers to make their pick. You may be confused as to why there’s no booing, but remember, this is still a few years before Gary Bettman came along.

• Flyers GM Russ Farwell is onstage to make the pick. At this point, the video cuts out for 45 seconds and we miss out on Farwell thanking the host city, congratulating last year’s champion, and saying hi to the team’s draft party. Either that or this was 1991 and NHL GMs didn’t do that stupid crap before every pick.

• Forsberg is indeed the pick. Just as McKenzie predicted, proving that his judgment in forecasting draft picks is every bit as infallible as it would go on to be for choosing book cover blurbs.

• Background Mom is not impressed. Her boy is way better. 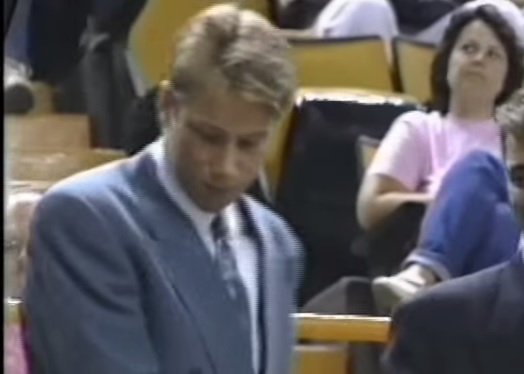 • Now we get to play our favorite draft-day game: Can this European prospect actually speak English? Paul Romanuk discovers the answer: kind of, but not really. He asks three questions, gets roughly seven words’ worth of answers, and pulls the chute on the whole thing as fast as humanly possible, at which point Forsberg is led away by David Koresh.

• There appears to be a colorful hot-air balloon tethered in the background. Fun decoration, or subtle nod to that year’s second overall pick? You decide.

Forsberg, of course, didn’t get a chance to have his rookie season in Philadelphia; his rights would be traded to the Nordiques a year later as part of the package for Lindros, although he’d play for the Flyers for a few years toward the end of his career. He retired in 2011, and made the Hall of Fame in his first year of eligibility.

Background Mom is still not impressed.