There are some years when the NCAA tournament disappoints us. This is not one of those years. Let’s run through the weekend and celebrate the Winners and Losers after another weekend of college hoops perfection.

Andrew Sharp: UConn opened the game on 12-2 run Sunday, but for the rest of the first half, Michigan State looked like the better team. The Spartans closed with a 9-0 run over the final five and a half minutes, and it looked like things would get ugly in the second half.

I don’t remember the exact words, but coming out of halftime, a CBS sideline reporter asked Kevin Ollie about Michigan State forcing UConn into tough shots. He corrected her and said they’ve actually had a bunch of open looks, they just haven’t knocked ’em down. They would in the second half, he said. This is the moment I knew UConn would win. It just felt smart to bet on Ollie after that interview. If a stupid sideline interview can inspire irrational confidence in me, imagine what he does for his players.

Then there was Shabazz Napier. He’s hit more big shots in the last two weeks than every other team combined. He helped slay Iowa State and DeAndre Kane on Friday night, and he continued to be a nightmare all day Sunday.

Shabazz Napier has drawn 6 fouls today, all in the second half for UConn

The biggest play came at the end, obviously, when Keith Appling hit Napier’s elbow on a 3 with UConn up two in the final minute. When Napier went to the line, my roommate said, “There’s no one in the world I trust more to hit all three free throws here. Ray Allen at the line? Nope, give me Shabazz Napier.”

And he hit all three, and UConn won.

This has been one of the best NCAA tournaments we’ve seen in years, but nobody in the field has been more impressive than Napier. Unless you count Ollie, and then maybe you have an argument. 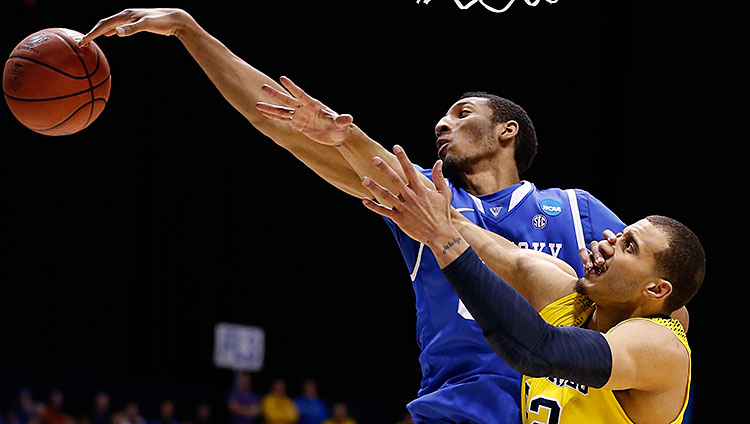 Chris Ryan: When John Calipari sent Marcus Lee into Kentucky’s Elite Eight game against Michigan on Sunday, I figured he was throwing a Hail Mary. Willie Cauley-Stein was injured, the Wildcats were losing, he had to do something brash. So Calipari put in this freshman who averaged only six minutes per game during the regular season. Lee proceeded to play like 2004 Ben Wallace: offensive rebound, dunk, block, offensive rebound, dunk. For most teams, going to the well to bring the third or fourth big man off the bench would probably mean the rest of its frontcourt had been decimated by injuries and foul trouble. That would be a problem. If Kentucky has injuries or foul trouble, it just means another 6-foot-9 McDonald’s All American finally gets to shine. Having too many good young players. That’s a Kentucky problem. That’s why this team is going to Dallas.

Sharp: Michigan lost Tim Hardaway Jr., Trey Burke, and Mitch McGary, and somehow wound up with one of the five or six best teams in America. Its whole rotation was great. You had Morford (Jordan Morgan + Jon Horford) holding things down up front, Stauskas, Little Dog (Glenn Robinson III), Caris LeVert, and then guys like Spike Albrecht, Zak Irvin, and Derrick Walton Jr. orbiting the perimeter and wreaking havoc.

It was fun watching Michigan all year — especially Nik Stauskas, Lion of the North — but it was all even better in the tournament, when we found out none of this was a fluke. The Wolverines had no business being this good, but for the final two months of the year, they hit another level. They may have lost Sunday, but nobody who watched the game could come away with anything bad to say about Michigan. 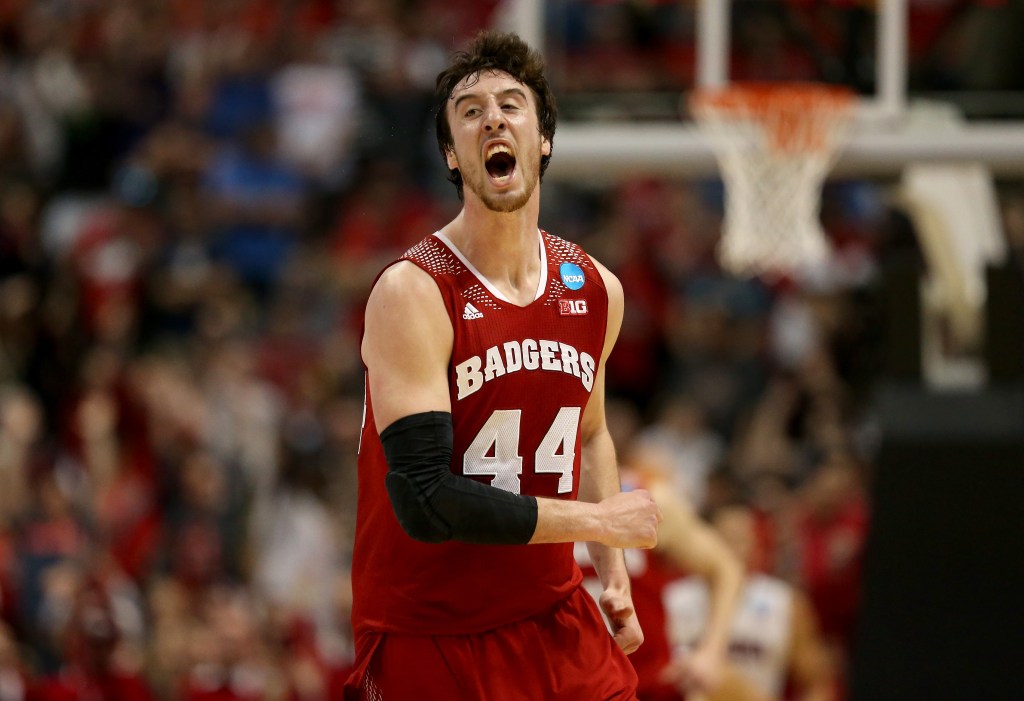 Sharp: The rise of Wisconsin basketball is worth it for three reasons:

Sharp: Celebrating a Final Four would be fun at any school in the country, but having spent a weekend at Wisconsin, I can’t imagine anywhere in America more fun than Madison on Saturday night.

WCJB in Florida: almost as good as the Gators

Ryan: In case you missed it, Florida played like a no. 1 overall seed this weekend, and this local news team did the Gators proud. Who needs highlights? We want more reenactments! (via SB Nation)

Sharp: Come one. I’m sure everyone at CBS got several memos about this, but please stop.

This drove me crazy over and over again Sunday. Just say Dallas. These teams are going to Dallas, not some random 90,000-person hangar in the middle of nowhere, Tex— oh, what’s that?

OK, fine, maybe “north Texas” conveys this better than anything else.

Sharp: This is what Aaron Gordon looked like after that Nick Johnson offensive foul in overtime. This expression was somehow more heartbreaking than tears. 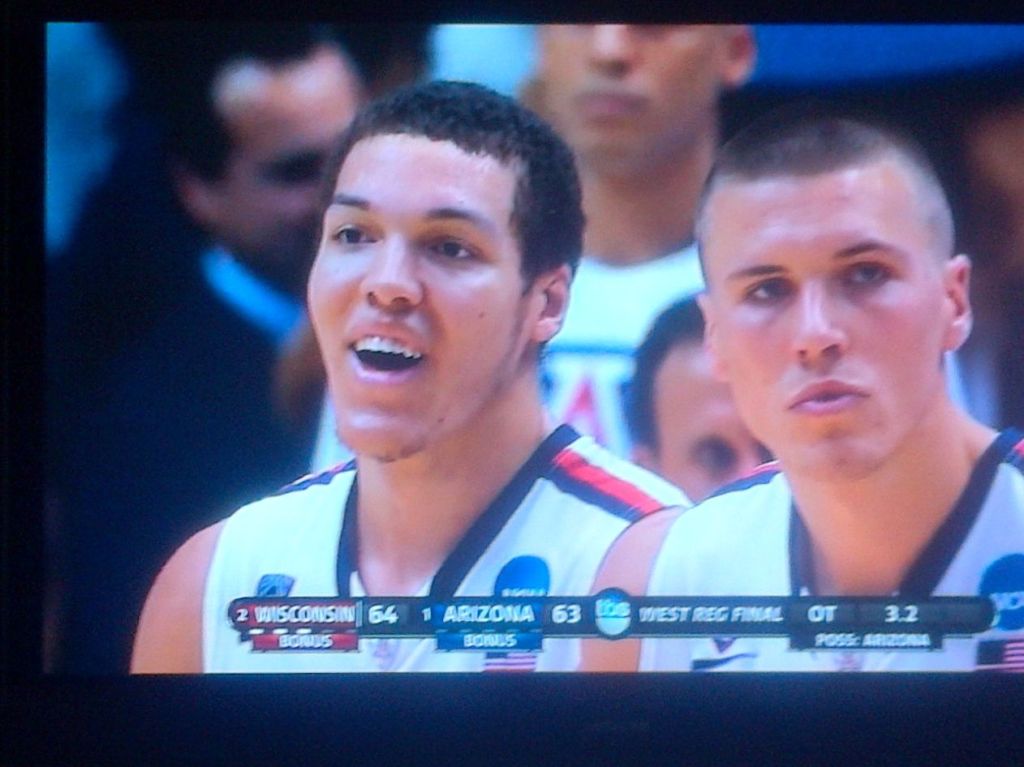 Sharp: Sean Miller is the best young coach in America, Gordon is a freak of nature, Zona went eight-deep with guys who could’ve started anywhere, and it sucks that none of these guys are going to be involved in the Final Four. I don’t understand why they weren’t more dominant, but they were still pretty great all year, and they were every bit as good as Wisconsin on Saturday.

That offensive foul was a borderline call that could’ve just as easily been ignored, and that split second was the difference. Sports are horrible sometimes. Just look at Gordon up there.

Sharp: This stat was repeated over and over again this weekend, and that’s OK, because it’s absolutely incredible.

If Michigan State loses, Keith Appling and Adreian Payne will be 1st 4-year seniors under Tom Izzo to not make a Final Four.

Michigan State got blitzed by Napier and the Huskies in the second half, but I’m still convinced this was one of the two or three best teams in the country. And Tom Izzo is every bit as amazing as that stat above. Had Appling not fouled Napier on that 3-pointer at the end, the final minute of that game becomes a complete toss-up. Just like the end of Arizona-Wisconsin, and even Michigan-Kentucky.

Anyone who’s not watching this

Sharp: This may feel obvious after this weekend, but still.

There are close games that aren’t actually well-played by either team, and then there are close games in which both teams are coming up big over and over again, blowing our minds on every possession. This tournament has given us a lot more of the latter than the former.

I was just about ready to give up on college hoops this time last March — so many charge calls and clanked jumpers — but it’s been so much fun to watch it all bounce back a year later.

And since we’re in the “losers” section of this piece, this feels like a good place to point out that we owe most of this brilliance to the teams that lost. As great as the Final Four teams have been, teams like Michigan State and Zona — and Wichita State, and Tennessee, and Louisville, and Virginia, and Michigan — were just as awesome along the way. Most of the teams that lost this weekend deserved to win, which is probably the best-case scenario for any tournament. Everybody’s coming up huge, hitting clutch jumpers, and playing well enough to win, and we’re just watching them all collide.