Multibillion-dollar mergers have closed faster than Zaza Pachulia’s five-figure deal, but more than a year later, the paperwork is sitting on his desk: Pachulia is finally going to close his purchase of the Milwaukee Bucks’ old arena floor.1

Pachulia declined to say how much he paid for the court, only that it was less than $100,000. New courts cost about $115,000, so Pachulia likely paid in the low five-figures.

“Honestly,” Pachulia says with a chuckle, “I thought it was going to be an easy process.”

Pachulia came up with the idea a year ago, when he found out the Bucks were ditching their old Bradley Center floor in favor of a snazzy new Mecca throwback court. Pachulia grew up in Georgia, playing on courts that have grown shoddier over time and glimpsing the NBA through newspaper box scores and the occasional televised game. It would be a nice gesture, he thought, to install a real NBA court in one of Georgia’s basketball academies.

“Seeing that floor and seeing something from the NBA — the motivation for a young player can be so huge,” he says.

Pachulia remembers practicing with the Georgian under-16 national team about 15 years ago when Vladimir Stepania, the first Georgian to make the NBA, popped in to watch the session. Pachulia was unsure how good he could really become, and what kind of career he could make for himself as a basketball player.

Stepania approached Pachulia after that practice and told him that he was good and just needed to work on his post moves. “I couldn’t sleep that night,” Pachulia says.

Pachulia conducts offseason clinics at the academy in Tbilisi where he played as a kid, and he noticed last summer that the floor was deteriorating. He thought he could provide some similar inspiration by sprucing up the place with a court that would serve as a daily reminder of the NBA’s possibilities.

Just when he thought the deal was about to close, Pachulia and others in the organization began hearing rumblings Senator Herb Kohl, the Bucks’ longtime owner, was in talks to sell the team. A franchise sale throws everything into chaos. Front-office personnel worry the owners will clean house. Pending deals stall out, since any buyer would naturally want a full accounting of the team’s assets and liabilities.

Pachulia’s purchase would have to wait. Kohl sold the team in April to Wesley Edens and Marc Lasry, two hedge-fund heavies, for $550 million, and the league approved the deal a month later.

But Pachulia still had to wait for the owners to settle in, take inventory, and decide which preexisting deals to execute. He didn’t want to bother them with his little item. He didn’t knock on their doors or bug them over the phone. Pachulia also had to negotiate with the Bradley Center, a separate corporate entity. Both the Bucks and the league preferred the team keep the old floor for a year, in case of problems with the new one, team officials say. The NBA also had to grant clearance for a court bearing its intellectual property to move to a non-NBA venue, the Bucks say.

“They had so many transactions to look at, so much legal stuff,” Pachulia says. “We had a coaching change all of a sudden. So many things happened. I just tried to be patient and stay professional. The floor was not a priority, and that’s fair. The hope was always there that I would get it one day.”

That day is here, but the transaction still has some moving parts. For one, Pachulia has to decide where to put the damn thing. He nixed his first choice, his old Martve academy in Tbilisi, because any court there has to host both games and practices. Court dimensions for international competitions are different than NBA standards, and Pachulia will not permit any alterations to the old Bucks court — no redrawing the 3-point arc, or anything else.

“I am not OK with changing the lines,” he says. “This is how I want it. So many great players played on this court. It should stay the same.”

Pachulia has to find a practice-only facility, and he has a few candidates in mind. Shipping the court will cost “a couple thousand dollars,” though the Georgian government may help with that, Pachulia says. The court comes apart in 267 pieces, and Pachulia will have to rent a 40-foot container and a spot on a container ship to transport the floor across half the world. That process will likely take a couple of months, and the court may not arrive until the summer — when Pachulia can be there to see it installed and unveiled. “Probably sometime in May or June, when we’re hopefully done playing in the playoffs,” he says.

He may green-light one alteration: Pachulia and some of his teammates have thought about painting their signatures onto the court, marking their presence on it for all time.

Other international players, including Goran Dragic, called Pachulia after reading about his floor purchase and asked for advice on how they might do the same for their youth academies back home, Pachulia says.

Bad news: They’ve got competition. Pachulia might be in the market for another used NBA court. “I might look for a second one,” he says. “But now I know it’s not easy.”

This has actually been quite a couple of weeks in NBA court news. Two more tidbits:

1. A week or so after I slotted Cleveland last in my court design rankings, the Cavaliers unveiled an ambitious redesign: 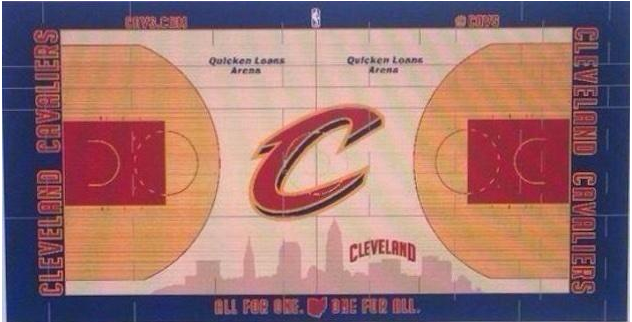 Here’s the old one: 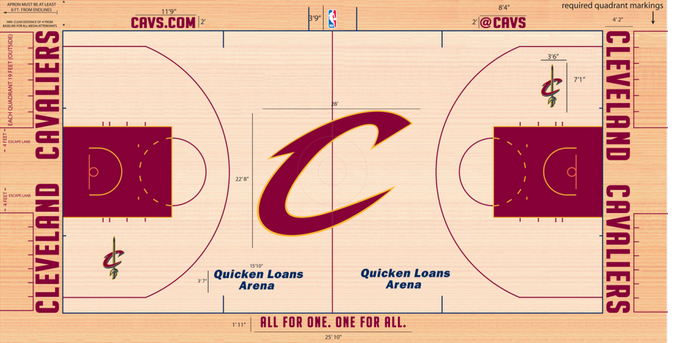 As you can see, there are a ton of changes. The addition of the Cleveland skyline silhouette is a boundary-pushing move that scores some points for creativity and balls.

The other changes are just as visually impactful. The Cavs have gone with a two-toned wood model; the area inside the 3-point arc is a darker shade than the middle of the court. I’m generally against this style of two-toning, which swept the league about a half-decade ago, but for reasons I don’t really understand, I prefer the darker shade where the Cavs have it — inside the arc.

They’ve shaded the sidelines and baselines in navy blue, and added a nifty little map of Ohio between the “All for One” and “One for All” along the near sideline — a nice touch.

And … I still hate it. I have some sort of visceral distaste for the giant central “C” logo, the largest center-court logo in the league in terms of square footage. I enjoy drinking wine, but the color has never worked on a large scale. Wine and navy make for an awkward, dark, and busy blend. I’ll also miss the little C’s with swords through them the Cavs had in two corners.

The skyline is cool, but it doesn’t work as well as it should. It’s hard to see on TV, and the Cavs and the league are working on some last-minute tweaks to remedy that. There were rumors the Cavs would have to scrap the new court altogether, but the revised version should be ready for opening night, per several sources.

The Cleveland skyline might not be distinctive enough for this to really leap out. There is no Space Needle or Empire State Building.

Robbins Sports Surfaces, which designed the floor along with the Cavs’ entertainment folks, declined to comment, citing confidentiality agreements that don’t lift until the regular season tips. The Cavs also declined to make their in-house design minds available for interviews.

This is not a knock on Robbins, by the way. They’ve designed a hefty chunk of the NBA’s courts, including the new Charlotte court, which might ascend to the top spot in Grantland’s rankings once we let it sink in for a full season. We’re in a great period of court design, and someone has to rank 30th.

That said, I’m open to moving the Cavs up. We have to see how the final version looks on TV, and the skyline is an idea worth trying. With the 30th spot up in the air, we can create a bottom five and re-sort it once we see and absorb the revised Cleveland court: Cleveland, Houston, Phoenix, Oklahoma City, and Minnesota.

Those are the five worst courts in the NBA, in some order. The only one for which I received any aggressive pushback is the Suns’ black-and-orange Halloween-style court. Some people really like that sucker. It is probably my least favorite Phoenix court ever. I cannot abide by the absence of purple-blue.

I heard convincing arguments for the Rockets, Wolves, and Thunder to hold down the no. 30 spot. They’re all worthy candidates. Cleveland’s redesign has jumbled the bottom five for now, but the rankings proceed as ordered from there — with one exception.

2. I hinted in those rankings that the Pelicans had a gutsy new court design they were rushing to get approved for this season, and plopped them into the no. 19 spot as a placeholder. They finished the job and revealed the new look last week: 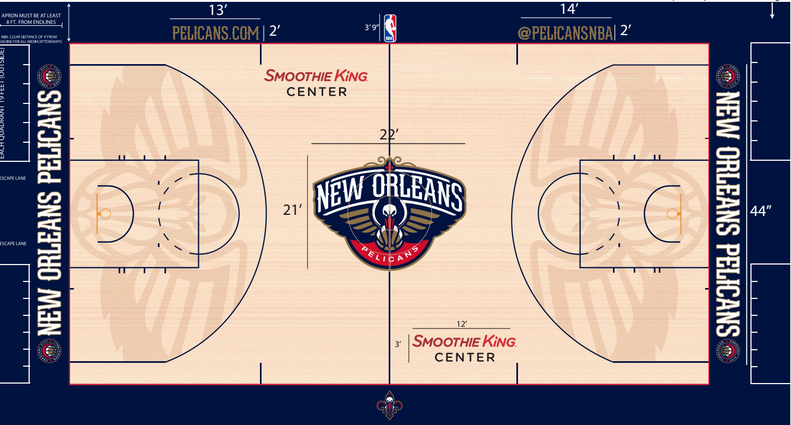 Boom. There is nothing like that in the NBA, and I’m not sure there ever has been. It is a courageous choice.

It reminds me a bit about the Bucks court, in that it is so wild, it’s going to take a few viewings before I can make a final conclusion. I’m not crazy about the team’s main pelican logo, and there are now three giant versions of it taking up half the court — and four more mini-logos along the baselines. The navy-ish shade is sort of boring, especially considering the pizzazz of this city and the team’s history of using more vivid teals and golds.

The court overall is interesting. I like it. In time, I might love it. But for now, it can go no higher than Denver at no. 15. The Nuggets have a nice court; that it ranks as league-average on this list shows how strong the NBA’s overall court design is now.

So that would make the updated rankings go like this:

Bottom Five in Some Order: