This starts with your old pal, Scott, wearing a bird head. And it ends with a 61-year-old named Russ Riescher shaking a tambourine to the riff of “Seven Nation Army.” In between, standing with the Atlanta Hawks’ 6th Man at Philips Arena, you get hit in the face with pom-poms, Kyle Korver breaks out of his slump, and the Hawks beat the Kings by 25 points. Thirtysomething twins named Angie and Andrea blow air kisses to players and spill popcorn and beer. A 26-year-old in fake dreadlocks named Chris Williams screams his throat dry every time DeMarre Carroll makes a bucket. A grandmother named Dorothy Sampson with short gray hair and red boots with red tassels points to a flag she calls the Hawk-Spangled Banner and says that Josh Smith “played basketball like a 6-year-old.”

Your old pal, Scott — he is a huge Atlanta Hawks fan. One of the loudest. He’s been dubbed so by the very team he roots for: He is part of the 6th Man, a group of about 100 fans who get free tickets to stand in section 118 of Philips Arena and cheer. This past Friday, when the first-place Hawks beat LeBron James and the Cleveland Cavaliers, Scott wore a giant Angry Birds head that made him look 9 feet tall, a bird head with that video-game unibrow and snarling beak. Scott is Australian and has lived in Atlanta for 11 years and radiates joy.

So he hands you a red T-shirt. He pulled a few strings, he wants to get you in, and now you gotta put the shirt on. It’s the only way, he says; you gotta wear it to meet the most passionate people who root for the Hawks. You should probably chant, too, or cheer, or just … see. Don’t just stand there. You can’t be in the section if you don’t wear something like the T-shirt, or if you don’t move around. You tried to love the Hawks once; you lived in Atlanta for nine years. You and your wife (then girlfriend) went to games, took MARTA from Midtown, chanted Za-Za Pe-CHOO-Lee-uh. They usually lost, and you’d ride home to the wah-wahhs of sad trombones in your heads. There was even a game when the real-life hawk mascot just sat on its trainer’s arm and refused to fly. As music played. As the crowd waited. It wouldn’t move. A metaphor. 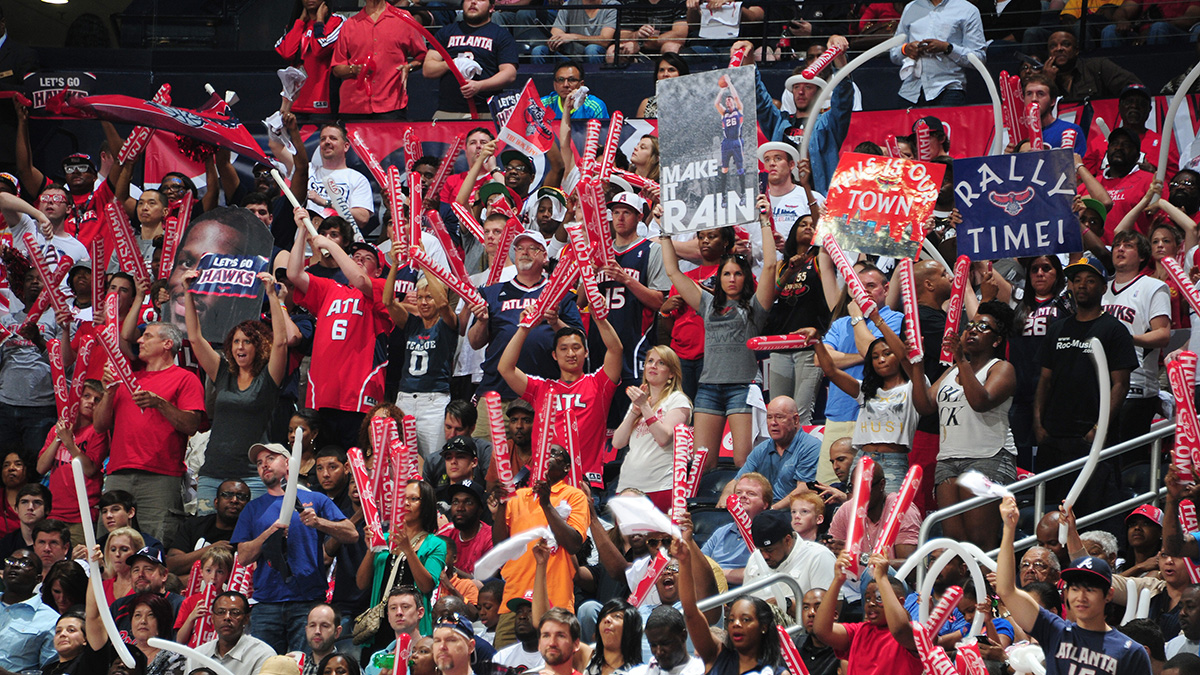 What is the 6th Man? It’s an island of weirdness and joy in Philips Arena, shouting all game for a team that’s never won a thing. Other people in the arena stare because the 6th Man is constantly making noise. Jumping in unison to get on the JumboTron. Shaking the bleachers. People put down their food and look to see where the ruckus is coming from.

The members of the 6th Man stand the entire game; they sing, they dance along with organist Sir Foster and DJ Big Tigger, they chant “A-T-L!” “A-T-L!” in unison, and they hold signs that say “WE THE SOUTH” and huge cardboard heads that are so vivid you can see the cardboard sweat on the face of coach Mike Budenholzer. Scott has been a member of the 6th Man for one year, this very year, the one that’s turned out to be the greatest regular season in the history of Atlanta’s woebegone basketball team. For his audition, all he had to do was go to the preseason games and yell his ass off. The 6th Man is five rows demarcated from the other sections by a red line. Scott and its other members each receive about $2,000 worth of free tickets, sponsored by Kia, to root for the Hawks. They have to show up and be louder than everyone else.

So seven minutes before tipoff, you are in Philips Arena, standing there in the last row of section 118, looking down at the way the lights shine on the court to make it appear as if the wood is breaking apart and a giant hawk is rising through the floor, when you meet a kid named Rashad Milligan.

Milligan is 20. His Hawks memories become vivid around the fourth grade. That year, Atlanta won a paltry 13 games; Milligan would watch them at home and cry. “My mom said to me, ‘Look, you’re going to be crying a lot. So just stop.’” Now a sophomore at Georgia State, he has seen a lot of bad/mediocre basketball in his life; he is wearing a Hawks cap backward and a red Hawks T-shirt beneath a red Hawks sweatshirt, and he doesn’t seem to want to jinx this amazing season by talking about how it might end. “Because of their history, you just kinda don’t know what’s going to happen in the playoffs,” he says, as overhead lights pinpoint the painted eye of the throwback Hawk Pac-Man logo at center court.

While the Hawks warm up, the other members of the 6th Man begin to yell the syllables of the names of each Atlanta player — Kor-Ver, Hor-Ford — like Yankees fans giving a roll call, trying to get a little salute in return. 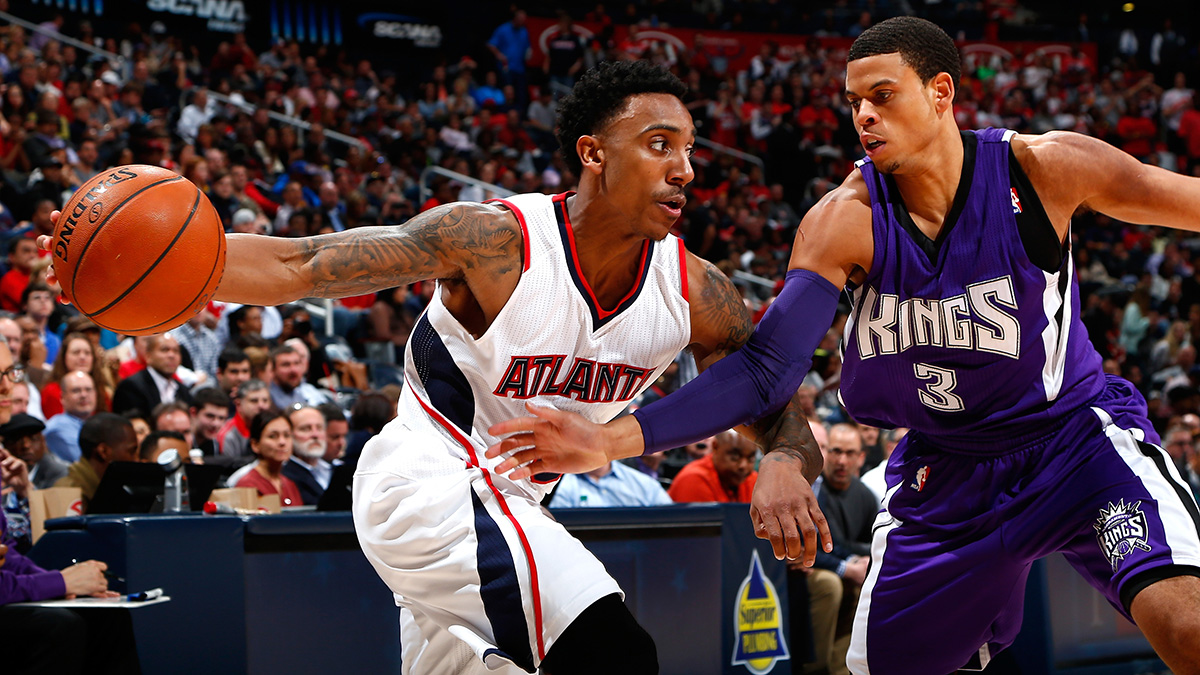 The members of the 6th Man are asked to be the best fans by the Hawks, to set the tone; they’re asked to be like college fans packing the rafters of an old-time field house, chanting and standing and stomping and clapping. They are asked to be respectful of opposing teams. The Hawks are in first place in the Eastern Conference, a half-game behind Golden State for the best record in the NBA, with a 1-seed in the bag. As the game unfolds and the Hawks go up early by what seems like an insurmountable lead, as the 6th Man begs for Korver to make it rain and barks when Carroll — “The Junkyard Dog” — touches the ball, Scott introduces you to Dorothy, the aforementioned grandmother who will stand the entire game, except during timeouts.

A few years ago, she thought she saw an ad in an email about cheap Hawks tickets. She knew her nephew and grandson liked to watch Hawks games. She forwarded the email to her daughter. Her daughter asked, “Did you read this email?” No, she said, she had only skimmed it. It was an ad to audition for the 6th Man. So she took the boys to audition, but the Hawks wanted her to try out. They helped paint her face in Hawks red with lipstick. And now here she is, four years later, wearing the red boots with red tassels and a bright red Hawks sweater. “I’ve seen the Hawks coming from nothing, to now,” she says.

The sixth men and sixth women you meet include a lawyer from Buckhead who is 55 and gets so hoarse that his colleagues ask if he’s got the flu. “Nah,” he says, “I got the HAWKS!” You meet a woman from Georgia Public Broadcasting named Elicia Katz who is in her fourth season in the section: “You have to be on, you have to know how to follow the game.” And you meet two guys who make their own Hawks pins. You meet the moderator of the Hawks subreddit, who talks about web traffic.

You meet Jessica Sampson, 28, in her yellow shirt, holding her huge cardboard cutout head of Korver. She is not only standing, not only cheering, but almost falling over every time Korver hits a 3, or when Al Horford grabs a pass out of the air and pounds it home. It is her first year as a member of the 6th Man.

When the Hawks asked an intern named Drew Frank1 to start the 6th Man in 2009, he didn’t quite know what it would turn into. The jumping, the coordinated chanting, the whole thing like some European soccer game, the other fans in the arena staring at the section like an island of … fun? Weirdness?

He is now employed full time as the franchise’s game presentation coordinator.

Who knew there would be a 61-year-old man with a tambourine dangling from his neck a few seats up, who also spends the entire game on his feet, next to his son, jumping, clapping, whooping, shaking his instrument, shkk shkk shkkk? The Kings game turns out to be one when the tambourine is like Christopher Walken’s cowbell — a prescription of tambourine, more of it, more, more. The Hawks pass the ball so well that they set an NBA season high in assists, with 42, half of which feel like Jeff Teague alley-oops to Horford, the dunks making Mr. Tambourine Man go shkk shkk shkk, shkk shkk shkk. “This is my second tambourine,” Russ says, examining it at halftime. “The first one, it was my second game — it was wooden — and I got so excited, I broke it.”

You don’t move with the tambourine, at first. You just watch Russ shake it, the old guy dancing with his son, with the rows of other fans. At first you laugh; then you give in and just start accepting the high-fives that you were trying not to pay attention to every five minutes. The twins standing beside you, dancing, spilling beer. The Hawks are THE! BEST! TEAM! IN! THE! LEAGUE! Scott chants, your tall Australian friend, wearing his red T-shirt. You walk outside and go home, not to the old sound of sad trombones, but the sound of tambourines. Shkk. Shkk. Shkk.

Justin Heckert (@JustinHeckert) is a writer living in Indianapolis. His stories have been published in Esquire, The New York Times Magazine, Indianapolis Monthly, ESPN The Magazine, Men’s Journal, River Teeth, and Atlanta magazine, among others. He previously wrote about Puddles the Singing Clown and stand-up comedian Kyle Kinane for Grantland.