Brady Hoke is about to lose his job as the football coach at the University of Michigan, and the two dozen reporters standing outside Schembechler Hall, beneath a scowling statue of the man whose name adorns the building, are scurrying to confirm the inevitable news. It’s been 48 hours since the winningest school in NCAA history dropped another game in Columbus, 15 days since one of its key defenders was dismissed from the squad for an alleged domestic assault, and 66 days since Hoke let a concussed quarterback wobble back onto the Michigan Stadium turf, essentially sealing the coach’s fate. Ticket sales are plunging, bowl eligibility erased. Players leaving a team meeting quietly walk past extended microphones and Hoke’s empty parking spot, refusing to comment because there’s really nothing to say.

I hadn’t hopped on a train for this mess. I’d come to Ann Arbor to meet Caris LeVert, the latest in a steady stream of unexpected maize-and-blue basketball stars. The hoops program, whose last McDonald’s All American was Daniel Horton in 2002, has reemerged as a national power in large part by developing undervalued talent. Maybe its targets were young for their age, or they hadn’t filled out quite like their peers destined for Kentucky and Duke. Either way, the coaching staff gets them to southeast Michigan and stuffs them in the training room with a revered strength coach (and former Buckeye) who weightlifting magazines see fit to profile. In the adjacent practice gym, they draw up sets that routinely put their maturing players in excellent positions to score. Last season, the linchpin was Nik Stauskas, the cocky and lovable Ontario sharpshooter. In 2011, Darius Morris powered the Wolverines to their second NCAA tournament victory in nearly 15 years. Trey Burke filled the role, and then some, during the club’s unexpected national-title chase two years later. LeVert — like Burke, a three-star Columbus-area recruit the Buckeyes overlooked — is now the big man on a (very big) campus. It’s an odd way to describe a kid who landed in Ann Arbor two summers ago as a 17-year-old, in braces, weighing 160 pounds soaking wet. “He was really under the radar,” says Eric Krueger, one of his coaches at Pickerington Central High School, “and he had a big chip on his shoulder.”

From Schembechler Hall’s parking lot, the horde meanders into the nearby Crisler Center and stuffs itself into the media room, steps from the basketball floor where LeVert plies his trade. One wood-grain lectern rests on an elevated platform in front, underneath maize-tinted lights. Writers check Twitter and clack away on laptops while cameramen — I count 16 — jockey for elbow room. At 4:30 pm, Michigan’s interim athletic director Jim Hackett strolls in to formally announce Hoke’s dismissal. Until February, Hackett had served as CEO of Steelcase, an office furniture manufacturing company. A middle-aged man with a shiny bald head and a conservative navy suit, he litters answers with the prepositional phrase “in business.” He talks through a complicated metaphor about the physics of pendulums and an extended bit on swim-lane charts. TV correspondents pepper him with questions he can’t answer and wouldn’t even if he could. 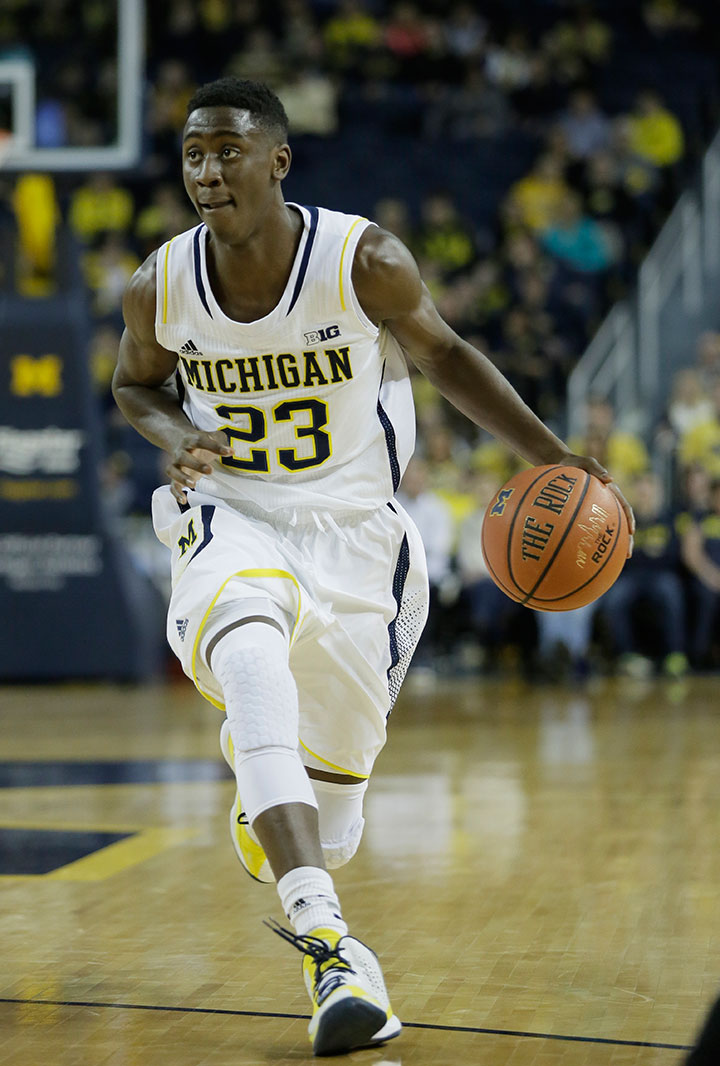 A lot can change in six hours. Later that night, around 10:30 pm, I return to that same room — not empty by any means, though thinned out considerably — and wait for another Ann Arbor resident to approach the lectern. Men’s basketball coach John Beilein arrives in a cheerful mood. His young Wolverines1 have just dispensed with a stingy Syracuse team in the ACC/Big Ten Challenge, 68-65, improving to 6-1. (The mortifying home losses to NJIT this past Saturday and Eastern Michigan on Tuesday, bad as they were, feel more like anomalous blips than signals of season-long doom.) Beilein’s eyes are bright, his shirtsleeves rolled to his elbows. “I had to work tonight,” he says with a grin, “but if I was just a spectator, that was a heckuva basketball game for December.”

The juxtaposition is stark. Here’s a relentlessly encouraging man and brilliant tactician whose squads won 83 games, with style, in the past three seasons. Michigan gained a share of the conference title in 2012, claimed it outright in 2014, and advanced to the NCAA championship game in 2013 and the Elite Eight last season. Five players were selected in the past two NBA drafts, including two lottery picks. Beilein is delivering potent medicine to an ailing fan base. Minutes before Hackett started his remarks, in fact, some beat reporters had joked about potential topics they might raise. One writer suggested, “How do you see the Wolverines attacking the Syracuse zone tonight?” The question would have been absurd, but in a twisted way, more fitting. Maybe it’s time for the Michigan Man (and Woman) to think about embracing a new athletic identity.

How the current face of that identity came to Michigan is a story that comes up often during broadcasts, but its circular beauty bears summarizing. John Groce, then at Ohio University, inks LeVert early. Ohio stuns Michigan in the 2012 NCAA tournament. The University of Illinois hires Groce. LeVert finds out the news on the same day his high school team is holding a schoolwide pep rally to celebrate its state championship. “At first, he was kind of bummed out,” Krueger remembers. “We tried to encourage him that these things happen for a reason.” The process opens back up, and LeVert falls in love with that school up north whose season Groce just jackhammered. Twenty-four months later, after sustained weight training, he’s a Big 10 Player of the Year candidate. Groce had this to say, over email: “He has obviously made the most of his subsequent opportunity at Michigan.”

The first thing you notice about LeVert are his arms, which would reach his kneecaps if he ever extended them fully. He doesn’t so much run as shuffle down the floor, his shoulders always sloping slightly forward, like a kid trudging through the halls trying to avoid unwanted attention. In one sense, he’s still a semi-awkward teen adjusting to his new length (6-foot-5 to 6-foot-7) and bulk (nearly 200 pounds). This controlled gangliness, though, gives opponents fits. As a sophomore, LeVert posted 12.9 points per game and raised his true shooting percentage 16 points, at times carrying a Mitch McGary–less attack dependent on a freshman point guard and a wing player, in Glenn Robinson III, who was never the most assertive scorer. LeVert even landed on the cover of Sports Illustrated, though not for reasons he’d care to remember. (“I thought it was a pretty good contest,” he told Grantland, accurately, in March.) Through nine games this season, he’s averaging 17.7 points, 5.4 rebounds, 4.1 assists, and 2.2 steals. His minutes, usage rate, and offensive rating are all up. His turnover rate, low to begin with, is lower still.

Even on a poor shooting night against Syracuse, his swelling confidence is evident; for an eight-minute stretch in the first half, there was nothing Jim Boeheim could throw out there to get in LeVert’s way. He hit an off-balance leaner from the elbow that plopped in before his defender even considered setting his feet, threw a calm touch pass from the soft spot in the 2-3 zone for a dunk underneath, buried a catch-and-shoot 3-pointer in transition without blinking. He could stand to get to the rim more often, where he’s only taking 16 percent of his shots, but otherwise the holes are hard to spot.

The faithful here adore their wiry captain, and they’re learning to appreciate their basketball team on its own terms, not in relation to the sport that’s dominated student life for more than a century. “Everyone loves it,” says Max Bultman, a sophomore on the sports desk at the Michigan Daily. “My friends get more excited for basketball games than football games.” Beilein makes it easy: His teams are skilled, they rarely foul, and they attract players who see value in their coach’s complex offensive system — perimeter-oriented with loads of screens and rapid ball movement — and genuinely enjoy playing together. The renovated Crisler Center is an arena befitting a national power, too, which is a new development. (As a Michigan alum who spent his college days watching teams on probation, I can write this with some authority.) It’s simple but tasteful, utilitarian but comfortable. And it’s actually loud. The athletic department has sold out its 3,000 student ticket allotment each of the past two years; several hours before tipoff, in the shadows of the towering Big House, I found hundreds of undergrads braving the cold for a courtside seat, a site that would have been unthinkable a decade ago when kids were content watching hockey games at Yost Ice Arena or playing NCAA Football 2004 back at the dorms instead.

Twenty minutes after his pair of free throws seal Michigan’s sixth victory, LeVert walks into the press room and assumes his position along the front wall. He stands tall, speaks quietly, and makes eye contact with every reporter who addresses him. It was 18 months ago that Michigan last battled Syracuse, in front of 75,350 people at the Final Four in Atlanta. LeVert delivered the most important performance of his freshman campaign that night, scoring eight and nabbing four boards in 21 minutes of action. I ask whether that game seems like it took place a long time ago, and he laughs (in a good-natured way) at my ridiculous question: “I’m a totally different player.”

Arizona awaits on Saturday. Frank the Tank and his Badgers visit in January. Tom Izzo’s crew rolls through three weeks after that. Who cares about winged helmets, anyway?