On Wednesday, Jorge Soler became the latest Cubs prospect to debut and dazzle, turning a fat 90 mph Mat Latos fastball into one of the day’s longest homers on his first major league swing. Soler added an RBI single in his fourth at-bat, feeding Cubs fans’ visions of a playoff run, possibly as soon as next season, fueled by a lineup full of sluggers from the farm. As Grantland colleague Michael Baumann wrote in his recap of Soler’s debut, “One game doesn’t make a rookie, but it’s a big step.”

Sometimes, though, a few stumbles follow a rookie’s first step. Cardinals right fielder Oscar Taveras, who entered this spring as the third-best prospect in baseball and made the majors in May, homered in his first game too. He’s hit .230/.270/.287 in close to 200 plate appearances since, with only one additional dinger. Of even more interest to Cubs fans, who aren’t broken up about Taveras’s struggles, is this odd-looking slash line: .189/.222/.442. It belongs to Chicago second baseman Javier Baez, another preseason top-five prospect, who capped his debut with a homer (after striking out three times), but has looked as lost in many at-bats as he has locked in during others. Baez’s next plate appearance will be his 100th in the big leagues, so in the spirit of arbitrary endpoints and the “first hundred days,” let’s review Baez’s performance to see where he’s gone wrong and what he’s done right.

We can see most of the good and the bad of Baez’s season in two GIFs. The first is a supercut of every Baez whiff. I hope you have some time for this symphony of strikeouts.

The second is Baez’s third homer, which is the most exciting example of what can happen when he makes contact.

Let’s start with the strikeouts. Baez has fanned 43 times in his first 99 plate appearances, a 43.4 percent clip. No other player with as many PAs in 2014 has topped 40 percent (although, as most Cubs fans could tell you, Mike Olt has come close). According to data from Baseball Prospectus, if Baez strikes out in his next trip to the plate, he’ll set a record for the most K’s in the first 100 plate appearances of a nonpitcher’s career since at least 1960. If he doesn’t strike out, he’ll merely tie for first on the list, with Russell Branyan and (brace yourself, Cubs fans, because this is cruel) Brett Jackson.

Baez’s feats have started an avalanche of fun facts; in 23 games, he’s already summited strikeout heights that many longtime major leaguers can’t claim to have scaled. However, we have to acknowledge that the rising leaguewide K rate has spoiled strikeout-related fun facts forever, or at least required that we keep some caveats in mind. The average strikeout rate in the majors this season is 20.3 percent, the highest it’s ever been. If Baez strikes out in his next at-bat, his rate will rise to roughly 217 percent of the league average. If we calculate strikeout rate relative to MLB average — K%+ — for every player on the “first hundred PAs” list, Baez is no longer near the top. In fact, he falls just outside the top 50, and behind post-2000 players Jackson, Jose Bautista, Ian Stewart, Wily Mo Pena, and Craig Wilson. (One of those guys turned out to be good.)

Here are the worst 10 players by K%+ in their first 100 career plate appearances:

This list, like Baez’s season, is a mix of encouraging and concerning: Strawberry, a Cooperstown-caliber hitter whose career was curtailed by addiction; Schmidt, probably the best third baseman of all time; Branyan, a three-true-outcomes journeyman who hit well when he played; and seven other no-names who combined for -1.9 career WAR. The range of possible outcomes runs from scrub to inner-circle Hall of Famer.

Strawberry, who suffered the most extreme early contract struggles, is also a perfect example of how quickly they can subside. “Rarely has a player headed for New York with so much expected of him, a result of the potential so widely attributed to him,” the New York Times’s Gerald Eskenazi wrote when the Mets summoned Strawberry to the majors. “And even more rarely has one 21-year-old player been expected to provide so much instant power.” Switch “New York” to “Chicago,” and Baez’s story sounds the same. Strawberry started off far slower, batting .172/.230/.290 with 38 strikeouts in his first 100 plate appearances, at a time when the average K rate was two-thirds of what it is now. From that point through the end of the season, a span of 373 plate appearances, he mashed to the tune of a .281/.365/.575 slash line, with a still-elevated but much more acceptable 24.2 percent strikeout rate.

In other words, it wouldn’t be unprecedented if Baez suddenly went on a tear. Research suggests that strikeout rate “stabilizes” after 100 plate appearances, but all that tells us is that we can be confident that a player’s strikeout rate over a 100-PA period represents his true talent over that span. It doesn’t necessarily tell us what that true talent will be over the next span of equivalent length. Players adapt and improve, particularly at Baez’s age.

One thing we can’t tell from the stats, though, is why Strawberry was striking out so much. In Baez’s case, we have the disturbing details. 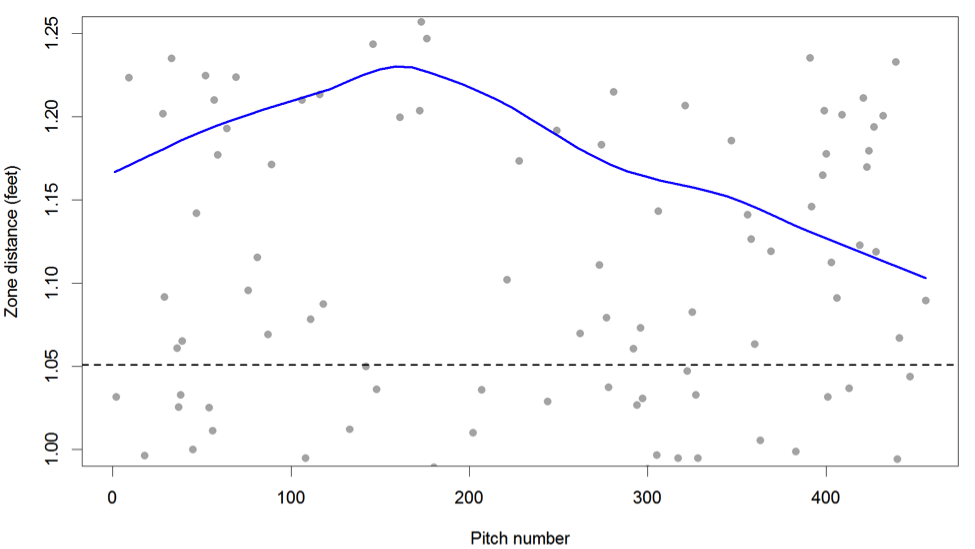 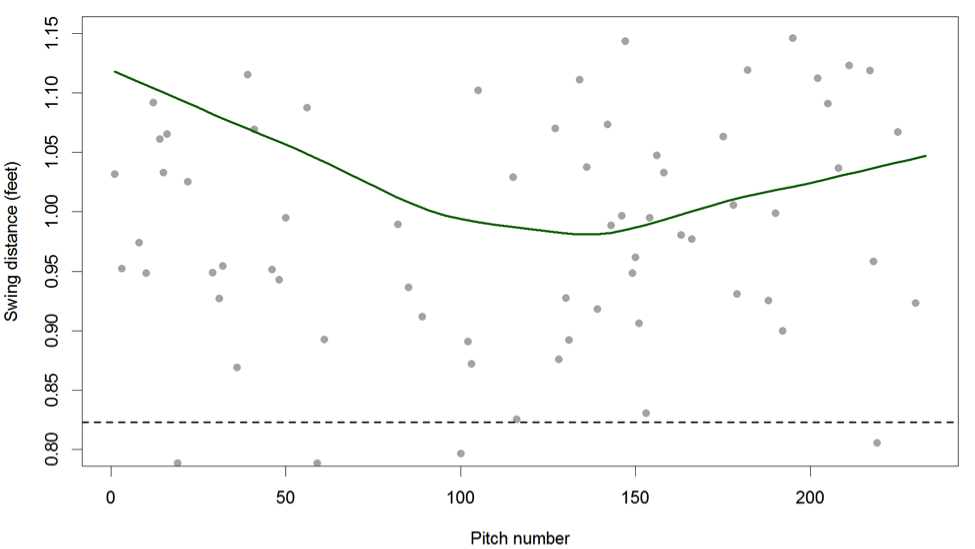 Don’t read too much into the trajectory of the trend lines, since these are still fairly small samples. However, the distance between Baez (who ranks among the five highest hitters in both zone and swing distances) and the average batter is obvious. Fearing his power and knowing that they can exploit his aggressiveness, pitchers have stayed far away, and Baez has helped them out by swinging anyway.

Baez swings at 37 percent of pitches that have a less than 5 percent probability of being called a strike, according to BP’s strike probability model. There are only four hitters with higher swing rates on those unlikely strikes than Baez this season: Reed Johnson, A.J. Pierzynski, Ramiro Pena, and Hector Sanchez. When those four swing at those distant pitches, though, they whiff only 37 percent of the time, relative to the 50 percent league average. When Baez swings at them, he misses 76 percent of the time. His flailing outside the zone isn’t a strategy based on some Sandoval–esque ability to get his bat on any ball. It’s the absence of a strategy.

Baez’s problems are even more pronounced against breaking balls, which he swings at, on average, almost 2 inches farther from the center of the zone than he does all other pitches (one of the biggest such discrepancies in the sport). Pitchers have noticed. Although they avoided the strike zone against Baez from the start based on scouting reports and reputation, they’ve dramatically upped their breaking ball usage against him as his vulnerability has become clear. 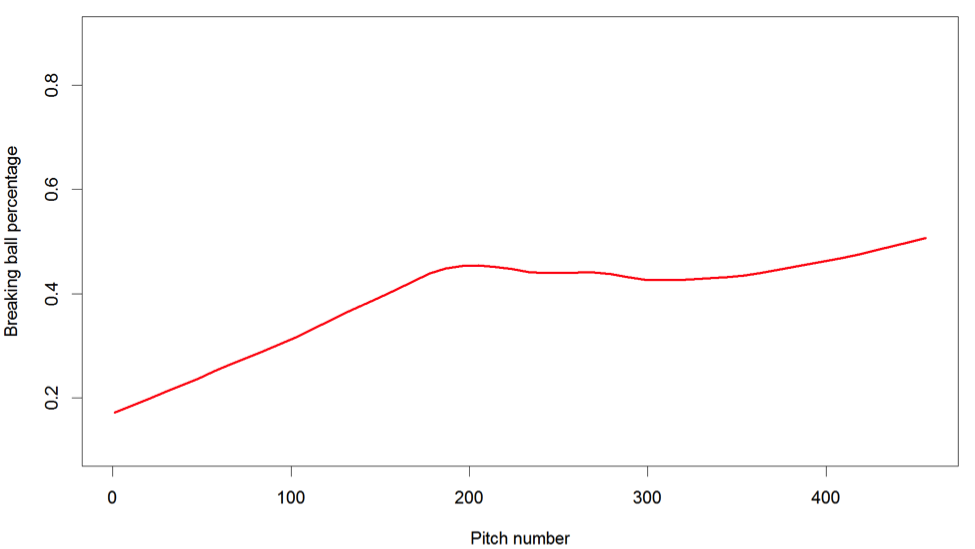 Breaking balls down, fastballs up: This is the way to beat Baez today. (Pitch groups are clickable to select/deselect.)

We don’t know whether it will still be the way to beat him tomorrow.

Now that the ugliness is out of the way, let’s return to that homer, which was Baez’s second of a game against the Rockies on August 7. The pitch, an 0-1 slider from Juan Nicasio, had only an 8.3 percent probability of being called a strike, the lowest of any pitch on which Baez has gotten a hit. That’s not a location that’s particularly conducive to power. Here’s how right-handed hitters have done against sliders in a 2-by-2-inch box around that spot since 2011, relative to all other locations, by whiff rate, batting average on contact, slugging percentage on contact, and weighted runs above average per 100 balls in play.

Not great. Of 188 other pitches in that area that were put in play, only two others left the park. Baez’s was the only one that went out the other way, which (as Jeff Sullivan observed) made it even more anomalous. And while he hit it in Coors Field, ESPN Home Run Tracker reports that the altitude added only 3 feet, and that the ball would have gone out of 18 other parks. That’s the sort of swing, and the sort of result, that tells us that Baez is special, and not only in the sense that he strikes out so often.

Baez isn’t Shaq Thompson, the Washington Huskies linebacker1 who went 0-for-39 with 37 strikeouts as a Red Sox farmhand in Rookie League two years ago. Nor is he Anthony Gose, who looked overmatched when he made the majors (even more so than now), or Domingo Santana, the Astros prospect who “panicked” on defense and struck out 14 times in 18 plate appearances in the majors this year. Baez is raw, and right now, he’s easy to beat. But he’s already capable of turning the tables when someone makes a mistake, and he has a history of learning fast. In his first exposure to High-A in 2012, he hit .188/.244/.400 in 86 plate appearances. After adjusting to that level and moving up to Double-A in the middle of last year, he batted .228 with a .297 slugging percentage in his first 102 PAs (albeit with good power) before becoming a monster down the stretch. In Triple-A this season, his monthly OPS-split progression looked like this: .617, .738, .815, .999.

Baez is the youngest man in the NL, a distinction that typically implies both that a player has a ton of talent and that he has a lot to learn. He swings hard and with awe-inspiring bat speed, and the homers (he already has seven) have come almost as thick as the K’s. Baez’s contact rate when he swings at pitches inside the zone is barely below league-average; now he needs to become more judicious about swinging at pitches outside the zone, which young hitters tend to do as they add more pitches to their decision-making databases. The only question is whether the contact rate will rise enough for all the power to play.

On Wednesday, Baez faced flame-throwing Reds closer Aroldis Chapman in the ninth inning of a two-run game, a matchup that we would expect to result in a strikeout 76 percent of the time if we took each player’s current K rate to reflect his actual skill. Baez quickly went down 0-2, taking a fastball for a strike and swinging at a slider that wasn’t one. Over the past five seasons, Chapman has thrown 265 two-strike pitches at least 101 miles per hour. He likes to aim them up, where they’re even tougher to time. 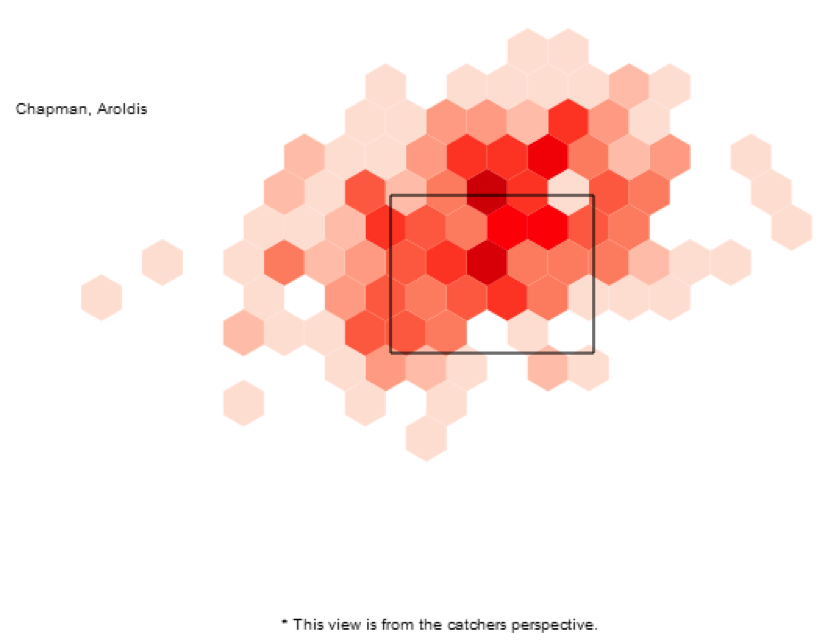 True to form, the fastball he threw Baez was up, albeit a little lower than he would have liked. It left his hand at 102. But Baez not only got around on it, he nearly drove it out. 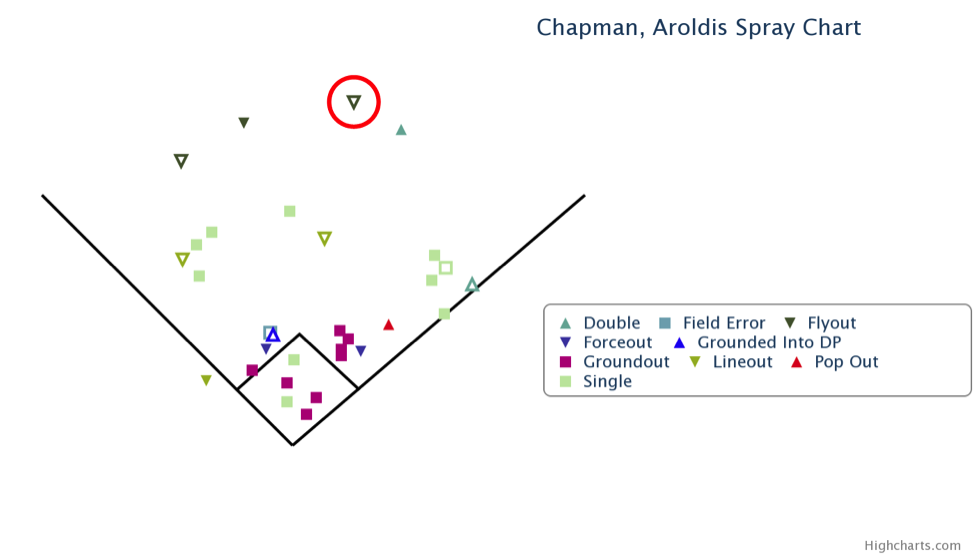 These are all the balls that batters have managed to put in play against a 101-plus-mph Chapman fastball with two strikes. There aren’t many of them. See the one inside the red circle, though? That’s Baez’s fly ball. He didn’t hit it quite far enough. But he did hit it farther than anyone else has. Amid all the strikeouts, Cubs fans can take solace in that.