Every now and then, we will attempt to write the worst sports column on earth. Today: Let’s talk about Marshawn Lynch and a winning culture.

LAKE WASHINGTON, WA — It’s sad, but it’s not surprising. It’s news, but it ain’t new. If you’re in this business long enough, you see a lot of Marshawn Lynches.

Anytime a team wins a world title, it doesn’t take long for the celebrations to turn into negotiations. Once the party’s over, everybody wants to bring home a bigger slice of cake.

They forget that the recipe for greatness started with sacrifice.

That brings us to the world-champion Seattle Seahawks. Marshawn “Beast Mode” Lynch is making $5 million to play football this year, and he doesn’t think that’s enough, so he won’t play football until he gets more. I’m no cap expert, but this seems pretty simple. They can’t pay him.

They don’t have to cut him, but they can’t pay him.

When a player gets me-first disease, the only cure is tough love. Otherwise it spreads to the rest of the locker room. You should think of player holdouts the same way cops look at bank robbers. Once you negotiate with one of ’em, you get held hostage by all of ’em. Maybe that’s why Pete’s drawing a line in the sand.

“It’s a contract for a reason,” Coach Carroll said last week, when this news first broke. “We made a decision and it was signed, by us and by them. We’re going to honor it and we expect them to do the same.”

Which guys would you want to go to war with?

This is what the Seattle situation boils down to. So many Super Bowl teams struggle the year after they win the big one. Why? Guys stop working for their brothers and start worrying about their bank account. It’s why Pete isn’t in any rush to bow down here. The Seahawks know better than to give in to me-first disease.

I understand the shelf life is short for running backs and Marshawn wants more security, but forget security. Look at reality. Beast Mode could turn to Bust Mode if he doesn’t get into Team Mode.

Entitlement just isn’t what the culture is about in Seattle. The star thinks he “deserves” to make more than $5 million this year?

Tell it to the people who spend money they don’t have to go watch battles they’ll never forget.

Tell it to the people who watch that flag get raised every Sunday and get goose bumps every time.

The people who helped put a Seahawks no. 12 in the top 10 for jersey sales. Those are the teammates that take this squad to the next level. The millions of people who sign up to be part of this and don’t expect a dime in return. Those people are why I wouldn’t worry too much about the Seahawks if they have to go a man down this year. 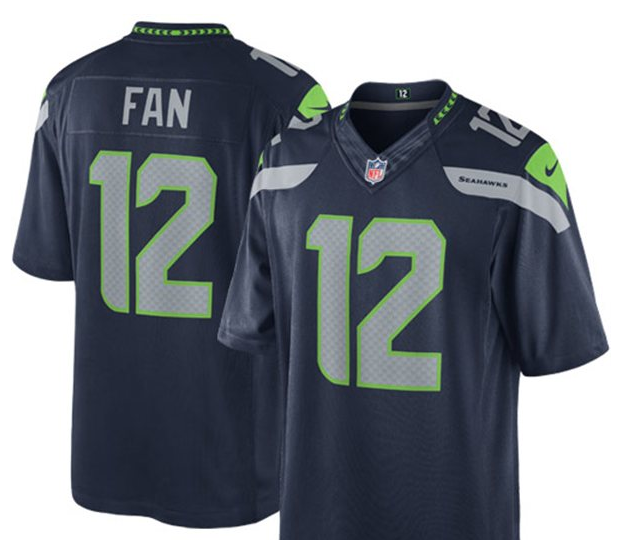 If Marshawn needs an example of how to be a pro, all he has to do is look over at his quarterback. Russell Wilson just won a world championship, and he’s making all of $662,434 this season. He’s not eligible to renegotiate his deal right now, but I must have missed the preseason story in which he was sitting out and complaining about it.

Russell just wants to get back out there.

Richard Sherman, too. Earl Thomas. Kam Chancellor. Percy Harvin. The boys who made this work just want to work.

That’s the kind of program Pete built out there.

Seattle has all kinds of great seafood options, but selfish has never been on the menu for the Seahawks.

And then there’s Marshawn, off in his Lamborghini. Did you see that the other week? He parks his Italian sports car behind velvet ropes every day. I won’t play the cynic and ask if a guy in that kind of car really needs more money. That’s just a cheap shot. Guys spend money on all kinds of crazy things — it’s not my job to judge.  (One thing’s certain, though: Your local schoolteachers are underpaid, too, and they don’t park their Lamborghinis behind velvet ropes.)

Whether he’s driving a Lamborghini or a jalopy, Marshawn’s at a fork in the road. They say the NFL stands for “Not For Long,” and he’s about to become living proof if he’s not careful.

It’s what makes this sport great. It reminds me of Captain Bill and The Patriot Way. In a me-first world, the winners in football put team above everything. First, last, and always. The integrity of a locker room is as sacred as the integrity of a contract. Pete Carroll knows it as well as anyone.

Pete has replacements ready now. Christine Michael is a fine young running back who had Seattle fans excited even before Marshawn decided to flake out. Robert Turbin has been productive in spot duty the last few years. They may not be superstars like “Beast Mode,” but if the train leaves the station, those young guys’ll keep things chugging along. And where does that leave the superstar?

That’s the question this month.

The clock is ticking.

And Seattle’s not budging.

Marshawn may have a fast car, but when the rubber hits the road in September, the Seahawks might just leave him in a ditch.