Since this week’s task is figuring out who’s getting invited to New York, we’re obligated to start with Mariota, who could probably throw 10 interceptions on Friday and still garner a significant chunk of the vote. That’s how much goodwill he’s built up over the course of the season, which, to review, has included a throttling of Michigan State’s vaunted defense, seven blowout wins over conference opponents, and, most recently, a near-perfect performance against rival Oregon State. Just put his smiling visage on the $50 bill, folks, because this man won the Civil War!

Mariota’s campaign was also aided by UCLA’s surprise loss to Stanford, which catapulted Arizona to the top of the Pac-12 South. Oregon now faces the Wildcats in Saturday’s Pac-12 Championship, giving Mariota a chance to avenge the Ducks’ only loss of the regular season. If he succeeds, he’ll have effectively neutralized the strongest argument against his candidacy, but if RichRod & Co. manage to upset the Ducks again, the door might creep open for Amari Cooper or Melvin Gordon to come in and snatch the Heisman from Mariota’s grasp. As such, the Oregon quarterback would be wise to encourage his teammates to avoid celebrations altogether this time around against the Wildcats.

While Cooper is unlikely to hoist the Heisman Trophy, he’ll at least have the satisfaction of single-handedly putting Ellis Johnson out of a job. The former Auburn defensive coordinator was fired after the Tigers’ defense surrendered 55 points in the Iron Bowl. Afterward, Auburn safety Johnathan Ford admitted that the Tigers attempted to defend Cooper like “any other person,” which, considering that he finished the game with 13 receptions, 224 yards, and three touchdowns, turned out to be a grievous mistake. Like Lil Wayne, Cooper is not a human being. This is not news.

At any rate, the upshot is that Cooper is this week’s biggest riser and will almost assuredly receive an invitation to New York. Helping his cause was Dak Prescott laying a massive egg in the Egg Bowl — sorry — making Cooper the SEC’s only viable candidate, which will prove especially important in this year’s highly regionalized race. COOOOOP, as the Tide faithful annoyingly call him, looks poised to be the highest-placing wideout since Larry Fitzgerald finished second in 2003. He’s been that good.

It’s a testament to Gordon that a 151-yard, one-touchdown performance can accurately be termed “disappointing,” but alas, the Wisconsin Badger’s 151-yard, one-touchdown performance against Minnesota was indeed just that. To phrase it more precisely, Gordon’s line was below average, seeing as he had been averaging upward of 190 yards per game. The wrath of Dilly Bar Dan knows no bounds.

All of Grantland’s Heisman Trophy goodness
Nevertheless, Gordon can redeem himself in Saturday’s Big Ten championship versus Ohio State. Squashing the Buckeyes’ playoff hopes would be looked upon favorably by voters, as would staying on pace to break Barry Sanders’s single-season rushing record. If Gordon does both of these things — runs for 184.5 yards and topples Ohio State — next Saturday night could get very interesting. If he doesn’t, an all-expenses-paid trip to New York isn’t a bad consolation prize.

Entering last week’s matchup with Michigan, Barrett — a paragon of efficiency ever since the Buckeyes’ ugly Week 2 loss to Virginia Tech — seemed like a solid bet to make it to New York. However, as you’re no doubt aware, the redshirt freshman fractured his right ankle against the Wolverines, clouding the legitimacy of his candidacy ahead of Ohio State’s showdown with Wisconsin in the Big Ten championship. 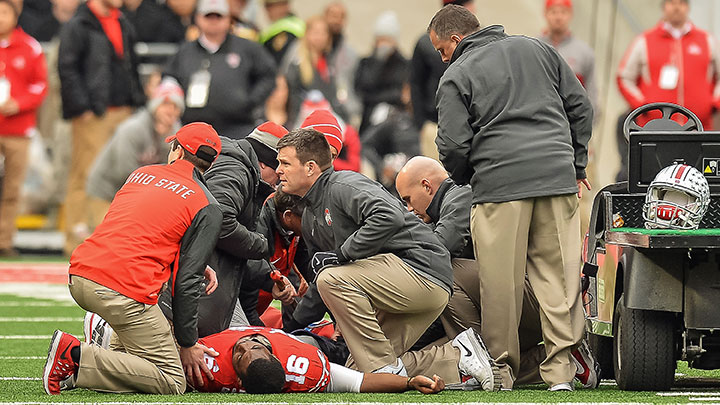 The injury came in the fourth quarter, with the Buckeyes holding a 28-21 lead, so Barrett still deserves credit for beating the Wolverines. What remains to be seen, of course, is how his teammates perform against the Badgers without him — and that could go a long way in deciding his Heisman fate. If backup quarterback Cardale Jones is able to pick apart the second-ranked defense in the FBS and Ohio State’s offense continues to dominate, some voters might attribute Barrett’s success to the system in which he’s played and opt to leave him off their ballots. On the other hand, Jones could be a total train wreck and cause Barrett’s stock to skyrocket. In a weird way, Buckeyes fans might — I said might — be better off if their star signal-caller doesn’t get the call to the Big Apple.

A least four players are usually invited to New York, and if Barrett fails to nab a pot, Boykin will probably attend. His campaign will get a major boost if TCU ends up qualifying for the College Football Playoff; some voters may even use that as a tiebreaker between him and Barrett. But Boykin’s Thanksgiving night roasting of Texas’s surprisingly-not-terrible defense probably cemented his status as likely Heisman ceremony window dressing — you know, a non-legitimate candidate whose primary purpose is to fill airtime during the broadcast — and he’d have to really screw up against Iowa State to lose out.