With another two weeks left before NHL training camps open and not much coming across the news wire, it can be tempting to assume that all the offseason’s major story lines have been neatly wrapped up.

For the most part that’s true, but there’s still occasional news trickling in. For example, this weekend we learned that the league had finally gotten around to finding a venue for the Winter Classic in Washington, D.C.,1 just nine short months after they announced the teams involved.

Where will Martin Brodeur play?

This is the time of year when the free-agent pickings start to look pretty sparse. Dustin Penner could help somebody, maybe Todd Bertuzzi if you were desperate, and even good old Paul “BizNasty” Bissonnette is still out there for a team looking to boost its Klout rating.

Other than that, the list is pretty thin. Well, except for that surefire first-ballot Hall of Famer who owns most of the all-time NHL records at his position.

That would be Brodeur, of course, who spent 20 years as the undisputed starter in New Jersey before splitting time with Cory Schneider last season and is now an unrestricted free agent. Given his résumé, you might expect that there’d be a long lineup of teams waiting to talk to him, but there’s been surprisingly little buzz around the nine-time All-Star.

That’s partly because the market for goaltending is already saturated, and partly because Brodeur hasn’t actually been all that good over the past few years. There just aren’t any teams that feel like they’re one .900 save percentage starter away from contending, and Brodeur has never seemed all that enthusiastic about accepting a backup role. That’s led to some recent talk that he may just retire, and the Devils say they have a front office spot waiting for him if he wants it.

Still, there are some scenarios remaining in which it could make sense for Brodeur to come back. He could wait for the season to start and see which team runs into inevitable injury problems. He could accept a backup role on a team where the starter is either on shaky ground or injury-prone, with an eye toward winning at least a share of the job. Or he could talk himself into settling for one last Cup chase by accepting a full-time backup job on a legitimate contender.2 So while the odds aren’t looking great, he does have options.

The Bruins come to mind as a good fit, and Brodeur himself seems to be lobbying the Habs.

Then again, maybe the best fit would be to return to New Jersey for one more year, back up Schneider, and go out as a hero — or a trade deadline rental if the perfect destination happens to open up during the season. That could be a tough pill for a competitive guy like Brodeur to swallow, but it might be preferable to ending his career with what could be shaping up as an extended Jerry Rice–in-Seattle moment.

Is Daniel Alfredsson coming back? 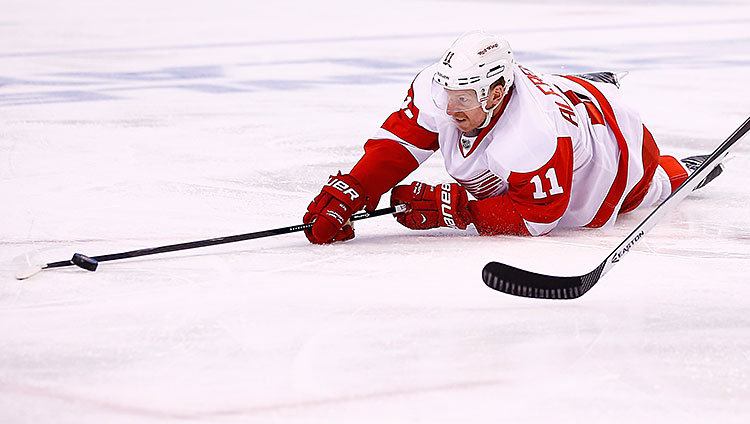 Unlike Brodeur, the question with the 41-year-old Alfredsson isn’t “where,” since he’s only interested in playing in Detroit. The questions are whether his body will let him play one more year, and whether the Red Wings want him back.

After 17 years in Ottawa, Alfredsson chose to go to Detroit last year in hopes of winning his first Stanley Cup. He performed well enough — his 49 points were actually good enough for a share of the team lead on the injury-ravaged Wings — but didn’t get close to that championship, as the team barely made the playoffs and bowed out quickly in the first round. He has battled back problems in recent years, and while he’s indicated his interest in returning, that could change if he doesn’t feel right once he’s back on the ice.

While the Wings would miss Alfredsson’s leadership, they do have a decent dose of youth on the way that could use his ice time. Earlier in the offseason, GM Ken Holland stopped short of guaranteeing him a roster spot. But more recent reports have been more positive, and there seems to be a fit here. The team doesn’t have much cap space, but could do a bonus-laden deal that would ease that pressure for this year. Chances are, this one doesn’t get decided until shortly before training camp, but the betting is that Alfredsson will be back.

By the way, Alfredsson and Brodeur aren’t the only veterans we may not have seen the last of. Guys like Tim Thomas, Saku Koivu, Ed Jovanovski, and Ray Whitney are all still unsigned, and none have officially retired. Heck, even Teemu Selanne hasn’t quite gotten around to hanging up the skates for good yet, although if he plays it will be in the KHL.

Can the Blue Jackets make a deal with Ryan Johansen?

This year’s arbitration season came and went (including the almost unheard-of wrinkle of an actual arbitration hearing), which would normally mean the end of any lingering contract disputes for top-end restricted free agents. But there are always a handful of useful RFAs who don’t yet have arbitration rights, and this year’s batch includes a borderline superstar in Johansen.

The lack of an arbitration option means that he and the Blue Jackets will need to work this one out on their own, and so far it’s fair to say that it’s not going well. The two sides have agreed on a contract length (two years) but not a salary,3 and they’re reportedly miles apart on the dollars. Johansen wants $7 million, which is superstar money, while the Blue Jackets are offering $4 million, which is in the just-OK number-two-center range. That’s not the sort of gap you sort out with a phone call or two.

Which seems like an odd way to negotiate, but maybe that’s just me.

The problem here is that Johansen is trying to get paid off of one great season, while the team wants to see him repeat that performance. Given how far apart the two sides are, it seems almost inevitable that this one drags into training camp, and maybe even beyond. Remember, P.K. Subban missed the first few weeks of the season over a similar dispute with the Canadiens two years ago, and those talks hadn’t become as contentious as this one has.

Technically, Johansen could sign an offer sheet with another team, but those are rare,4 and he really doesn’t have any other leverage unless he’s willing to miss some time. That wouldn’t be a holdout, since he doesn’t have a contract to hold out from, but it would have the same effect, and it’s a tactic his agent is known for. And unless the two sides start moving their numbers, that’s where this seems headed.

When will Tim Leiweke leave Toronto? (And more importantly, why?)

And the Flyers are already capped out. 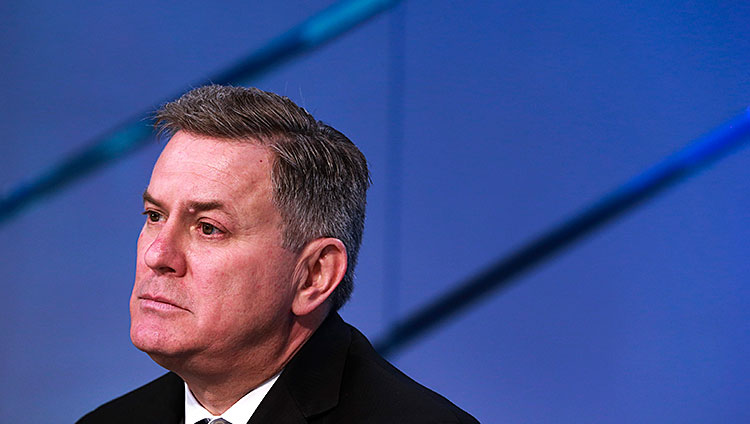 Leiweke’s name may not ring a bell, since you won’t find it on the Maple Leafs’ roster, prospect list, or even front office or coaching staff directories. But as the president and CEO of MLSE, the parent company that owns the Leafs and Raptors, among other properties, he may have been as crucial to the Leafs’ long-term success as any of the names on those lists.

That part’s still up for debate, since Leiweke’s one-year run in the top job has been met with mixed reviews. Some are convinced that Toronto’s sports teams will never recover; others aren’t especially distraught. Leiweke’s brief time in Toronto was marked by lots of bluster and buzzwords to go with some decent improvements on the basketball side, and he’s already declared the soccer team all fixed,5 but his impact on the Maple Leafs was less pronounced.

We’ll find out whether the Leafs will miss him soon enough, because Leiweke has one foot out the door. When the CBC’s Elliotte Friedman broke the news that the Leafs’ boss was on the way out, Leiweke denied it. One day later, MLSE confirmed the departure,6 although the actual date is still up in the air. He may stick around until the end of the season, or he could leave earlier if a successor is found, but we do know that he’s gone.

The lesson, as always: Elliotte Friedman knows everything.

What we don’t know is why, and that’s where things get interesting. Maybe Leiweke preferred the California winters, which would be fine. It could be that his dream job opened up unexpectedly somewhere else, and that, too, would be fine. But it’s also possible that he couldn’t work under MLSE’s corporate structure — the company is jointly owned by Bell and Rogers, two Canadian giants that compete directly in the high-stakes telecom world — and decided he’d rather bail than spend any more time playing boardroom politics.

Leiweke’s biggest Leafs-related move (other than planning parades and handing out head-scratching extensions) was the hiring of Brendan Shanahan as team president. That’s led to a summer’s worth of mostly impressive decisions, giving long-suffering Leaf fans some actual reason for optimism. But that optimism will fade quickly if it turns out that MLSE really is an unworkable mess of butt-covering and turf-protecting that even a veteran corporate guy like Leiweke couldn’t stomach.

What was the deal with all that expansion talk?

It’s been 14 years and counting since the NHL last expanded, and with revenues booming it’s long been expected that it’ll be looking to add a team or two in the near future. But last week, for one day at least, the NHL suddenly seemed set to welcome four new additions — including one that would be the first major pro sports team in Las Vegas.

That possibility, based on a pair of reports, had the hockey world buzzing for roughly 24 hours, until the league shot it down. It didn’t deny that it’ll add teams, mind you — just that it wasn’t ready to do make that news official quite yet. And that leaves us with a few pressing questions: When will the announcement come, and which cities are getting a team?

Each of the four teams mentioned in those reports — Vegas, Seattle, Toronto, and Quebec City — come with question marks. The two American cities may not have enough hockey fans to support a team. Toronto certainly does, but the city already has a team, as you’ve probably noticed,7 and that raises the thorny issues of territory rights and compensation. Quebec City had a team, too, and it left almost 20 years ago because the finances couldn’t work.

Unless you pay attention only during the playoffs.

The NHL is a different league now, so maybe the reborn Nordiques would be fine. And a second Toronto team makes so much sense that you’d assume that even the NHL couldn’t screw it up. Vegas and Seattle seem like tougher sells, but the league’s recent realignment left it with unbalanced conferences and in need of two teams in the West. And of course, the league needs to navigate all of this while still leaving a few viable possibilities open for any current teams that may need to move someday — or at least threaten to.

Expansion by at least two teams is still inevitable, but for now there’s apparently nothing imminent. And that’s too bad, because while we can argue over the impact of watered-down talent levels, there’s no debating that expansion drafts are the greatest.