By the time you read these words, gentle college football fan, you will have been subjected to the season’s first Tuesday-Wednesday double-doubleheader #MACtion attack.1 Still ahead on the weeknight slate: a Thursday clash between no. 21 Clemson and Wake Forest (7:30 p.m., ESPN/WatchESPN) and a couple of pretty interesting Friday-night contests between striving mid-majors, with Memphis at Temple (7:30 p.m., ESPNU/WatchESPN) and Utah State at Wyoming (8 p.m., ESPN2/WatchESPN).

If you skipped out for a football-free night for some reason, know that Toledo remains the only MAC team with a perfect conference record.

Saturday, you’re going to need to plan very carefully. With the conference races down to their final few weeks, a couple dozen-ish teams are still in the running for playoff spots. These programs’ paths converge from here, converge and crisscross and tangle, and a bunch of them will be running right at each other in the same prime-time slot on Saturday night. Wind your repp ties around your foreheads, and let’s go upriver.

Week 11’s slate is heavily back-loaded, but there are noon games worth dragging your carcasses out of bed for, thanks almost entirely to one majestic creature: Floyd of Rosedale. 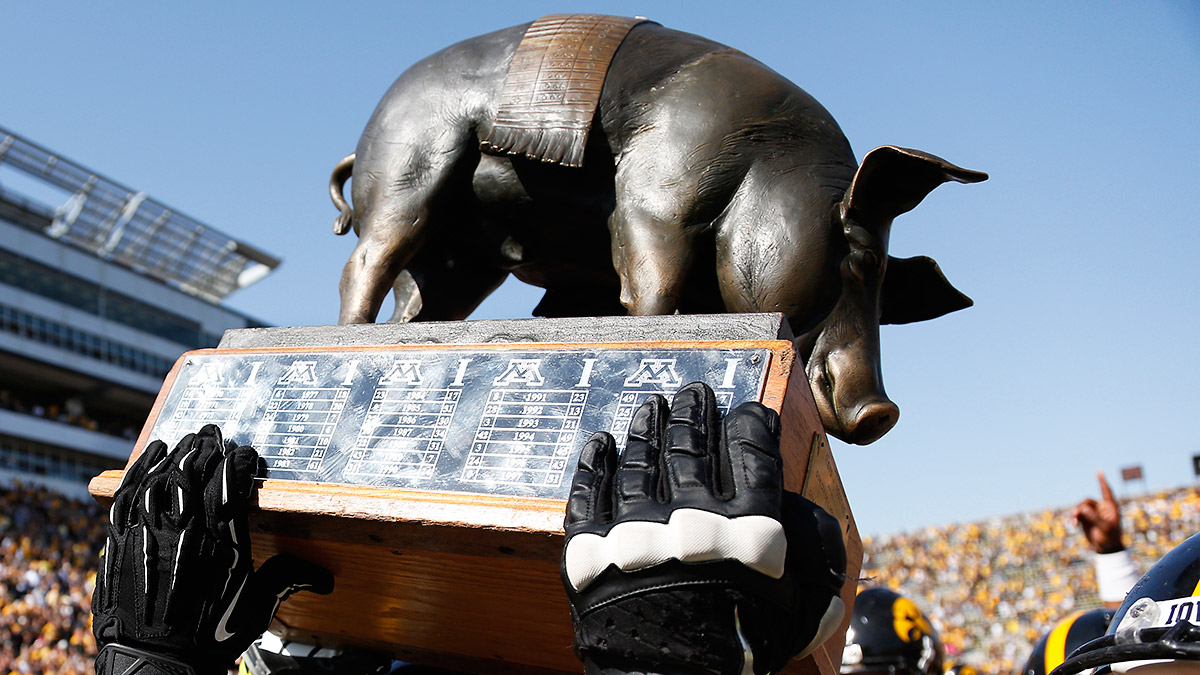 Floyd of Rosedale week seems to come earlier every year, doesn’t it? Iowa at Minnesota is available for your viewing intake on ESPN2/WatchESPN, and is guaranteed to be the only football contest this weekend played with a large metal pig at stake.

There’s also a noon game with actual playoff implications, if that’s really more important to you than cast bronze farm critters: no. 12 Baylor at no. 15 Oklahoma (FS1) carries high stakes for the Bears, who still have to play Kansas State, and who are currently ranked behind the TCU Horned Frogs they already beat.

For those of you following along with our quixotic quest to see a seven-way 4-4 tie in the ACC Coastal, an adventure most overtly threatened by Duke, be warned: That dream could be completely undone this weekend by no. 24 Georgia Tech at North Carolina State (12:30 p.m., ESPN3). The Yellow Jackets, who already have four conference wins, must lose every remaining conference game.

Relatively speaking, everything that happens before 7:30 p.m. in Week 11 is kind of a warm-up, but think of this like a fireworks show: plenty of booms before the big finale. Rest your remote hand by focusing your attention on no. 10 Notre Dame at no. 9 Arizona State (3:30 p.m., ABC), an endangered game we’re happy to still find on the schedule.

The Irish are on a fascinating path right now; with their only defeat a close loss to Florida State, they’re absolutely still in the thick of the playoff conversation, but they’re not getting a whole lot of help, strength of schedule–wise, from the performances of vanquished opponents like Michigan, Stanford, and North Carolina. The Irish didn’t want this game, but come December, they might need it — that’s assuming, of course, that they win. Watch for changes in the defense’s coherence without middle linebacker Joe Schmidt, who’s out for the season.

For commercial breaks, our sommelier recommends South Alabama at Arkansas State (3 p.m., ESPN3), a game that will vault into bowl eligibility either the Jaguars, the new kitties on the block, or the Red Wolves, winners or sharers of the Sun Belt’s past three conference titles.

You know the part at the end of the fireworks show, where it’s just blast after blast and you can feel it echoing through the empty spaces in your chest? This is it.

The rapid-fire goodness starts with Virginia at no. 2 Florida State (6:30 p.m., ESPN/WatchESPN), featuring an injured Jameis Winston, and no. 18 UCLA at Washington (7 p.m., FS1), featuring Shaq Thompson versus Myles Jack in what will hopefully devolve into a two-way-star dance-off. Then, at 7:30, those contests give way to the first of what should be three prime-time scorchers: no. 7 Kansas State at no. 6 TCU (Fox).

Matt Hinton has more on Wildcats quarterback Jake Waters, who’s made K-State one of the most well-rounded teams in the country; for the Horned Frogs, the focus will be on going out with a bang: The Big 12 doesn’t play a conference championship game, and TCU’s final three opponents are Kansas, Texas, and Iowa State. Eighty-point blowouts against the league’s lesser luminaries are wildly entertaining, but the Frogs’ time to impress the committee is now.

Get good and empurpled, and then get ready to start switching rapidly between Fort Worth, Baton Rouge, and East Lansing. No. 5 Alabama at no. 16 LSU (8 p.m., CBS) suddenly feels about as even as we thought it might in September, and a lot more even than we thought it might be in October. Still, we’re running up against two competing instincts of our own here: the thought we’ve shared before that LSU’s problems as a team are being solved pretty handily by time and experience, and the thought that Alabama’s not going to lose another game in the regular season.2 John Chavis vs. Lane Kiffin: Who you got?

We are the ones who had South Carolina and UCLA in our preseason playoff bracket, so definitely take this with the seriousness it deserves.

Meanwhile, in the Big Ten, no. 14 Ohio State faces no. 8 Michigan State (8 p.m., ABC/ESPN3). Both of these teams fell back to the middle of the pack, in terms of national attention span, after a pair of Week 2 performances that led to their only losses — the Buckeyes by two scores against Virginia Tech, and the Spartans by 19 points at Oregon. As conference front-runners divisionally realigned out of the possibility of rematching in the B1G championship game, these two are getting the look they deserve in Week 11, in the evening slot on ABC, and with GameDay in town. It’s just the thing to decide between the last two teams in the conference with perfect league records. How’s that feel, Joey Bosa?

Survive all of that? If the third flight of games is the cluster of blasts that ends a fireworks show, the late games in Week 11 are the homemade fireworks you’re inspired to make later on: not quite as glittery, but plenty loud, and still entirely capable of blowing your eyebrows off if you wander too close.

Week 11 has a long leadup and a short tail, beginning with no. 4 Oregon at no. 17 Utah (10 p.m., ESPN/WatchESPN). Watch for progress along the Ducks’ oft-injured offensive line versus a Utes defense that’s recorded 39 sacks this season, and for adjustments in Utah’s offensive balance following the loss of receiver Dres Anderson. Of Oregon’s three remaining opponents, Utah stands the best chance of dinging the Ducks, but Marcus Mariota & Co. have a comfortable lead in the Pac-12 North race; they can still technically be done in, but they won’t be.

And if you’re absolutely determined to go wire-to-wire on this day, San Jose State at Fresno State (10:30 p.m., CBSSN) should still get you to bed for some well-earned emotional rest at a sort of reasonable hour.