The Wizards are up 2-0 on the Chicago Bulls, Simmons picked them to make the Eastern Conference Finals, and Charles Barkley picked them to sweep the Bulls and thinks they have one of the best teams in the East. What the hell is happening right now?

They won in overtime in Chicago on Tuesday, and on the heels of last week’s Wizards reality check, it’s time for an update.

(Note: What follows is a conversation between two voices in my head about the Washington Wizards, and just like last week, if you’re too sane to care about this, then definitely go do something more productive.)

We have to start there.

They said he was too young. They said he hadn’t looked the same since January. They said he wasn’t strong enough. They said the Wizards were running too many plays for him in crunch time, and treating him like a superstar when really he’s just a good jump-shooter. Actually, you said all that, because you’re the worst, and you haven’t believed in this team in months.

Yep. On Tuesday morning I told at least three different people that Bradley Beal is overrated and too inconsistent to be playing in crunch time every night.

That’s what makes you a hater.

But you know who didn’t hear any of it?

He was in the gym, getting shots up with John and Sam.

There were times last night when it looked like the Wizards didn’t have it. It wasn’t their night, even after Beal went off in the first quarter and the lead hit double digits. Once the Bulls came back, we looked doomed. The big men who dominated Chicago in Game 1 couldn’t do anything against the Bulls on Tuesday, the refs —

How is Joey Crawford still officiating NBA games in 2014?

And the free throws.

For god’s sake, the free throws. How many did they miss in the second half? Twenty? Thirty? It was setting up to be a very Wizards kind of loss. The kind of winnable game this team’s been losing all year, complete with nonexistent offense down the stretch, horrible turnovers, and just enough hope to keep fans watching, twisting the knife until the very end.

Let’s talk about the runner in the lane.

Let’s talk about the finish at the rim for the 3-point play.

Let’s talk about the patience, freezing while Taj Gibson flies past him, with one second on the shot clock, and then draining the 20-footer. LOOK AT BEAL.

Let’s talk about the fourth quarter. Wall couldn’t shoot, the Bulls’ defense had shut down the paint, they were down double digits, the game was over. And then Beal comes in and just takes over everything. It doesn’t matter if the horrible Bulls offense was the only reason they had a chance last night, and I don’t care if there are still two more games left to play; I don’t care if winning this series means the Wizards are bringing their horrible coaches and management. Whatever happens from here, Bradley Beal is a cold-blooded motherfucker, and I can’t wait to watch him play in D.C. for the next 10 years. Where’s the Wizznutz GIF?

I still can’t believe they won.

Remember Trevor Booker tipping out a thousand rebounds and keeping them alive in the third quarter?

Remember John Wall going warp speed down the court, getting into the lane, and finding wide-open shooters for the entire fourth quarter?

Remember Nene destroying the defensive player of the year in overtime?

Remember last week when you said this wasn’t a good team? Remember when you said you were rooting for the Bulls to blow them off the court to show how badly we need new management?

Honestly, I’d forgotten how much fun it is to win in the playoffs. Considering we haven’t done this for 10 years, you can’t really blame me.

Well, forget the management side of this. Our team is better than you realized, hater. They’ve come back against the Bulls the last two games because they’re the better team. They have more talent, and that’s what the playoffs are all about.

One night it’s Nene who goes off, the next night it’s Beal, in a few days it’ll be somebody else. John Wall won’t always score, but he makes the whole team so much scarier for any defense. This is a good team. This is a team that can sweep the Bulls just like Barkley said, go beat the miserable Pacers, and then head to the Eastern Conference finals and go to war with LeBron.

I mean, I don’t know if any of that’s true, but that’s how it feels when they win.

Look at this roster. They have Nene, the benevolent Brazilian, out here killing people on pick-and-rolls. They have Marcin Gortat, the Polish Hammer, who spent his whole life looking up to Steven Seagal. They have career journeymen like Martell Webster and Trevor Ariza raining 3s on people. They have Andre Miller, the dinosaur point guard wheezing his way through 15 minutes a game and abusing people in the post. They have John Wall and Brad Beal, two of the most exciting young stars in the entire NBA. They even have Randy Wittman, the lovable idiot in charge of all this. How is anybody in the world NOT rooting for this team right now? Where’s the Zard Party GIF?

It’s crazy. As awful as this team looked for the final two months of the season, things couldn’t have broken any better. Nene got hurt and inadvertently got a month of rest right before the playoffs, while Trevor Booker got more run with the starters than he ever should’ve. Now the Wizards have three good big men, plus two shooters on the perimeter with Martell and Ariza, and all of them are proven veterans. Then Beal and Wall holding things down as the best young backcourt in the league, and one of them will break out in just about every game.

There’s something happening in D.C. …

But it’s still the Wizards, so we should all waiting for something horrible to happen. Too many people believe in us right now. Are we sure this isn’t some elaborate prank? It’s time for a career-ending injury to Brad Beal, right? Can John Wall get arrested by Friday?

Seriously. There’s at least a 40 percent chance they go back to D.C. and lose both games, lose in Chicago next Tuesday …

I’m just saying, in each of the last two games, they’ve been down double digits in the second half, and I’ve said out loud that there’s no way the Wizards are winning the game, because their offense is just as inconsistent as Chicago’s. Let’s not act like they’re out there blowing people off the court.

But that’s what makes it fun! This team never comes back in the second half. This team never wins close games in the fourth quarter. This team never has a big, must-win game and actually wins. Until now, when the Wizards are shocking everybody. So you know what? Keep doubting them, hater. It worked so well with Bradley Beal.

Cool. I’m gonna keep doubting them, because you’re right. There are zero expectations, and every win is a bonus, and this is turning into the most fun I’ve had with professional basketball since 2005. I hope it never stops.

Wizards against the world.

Do you think Kirk Hinrich has dreams?

Of course. All men have dreams. 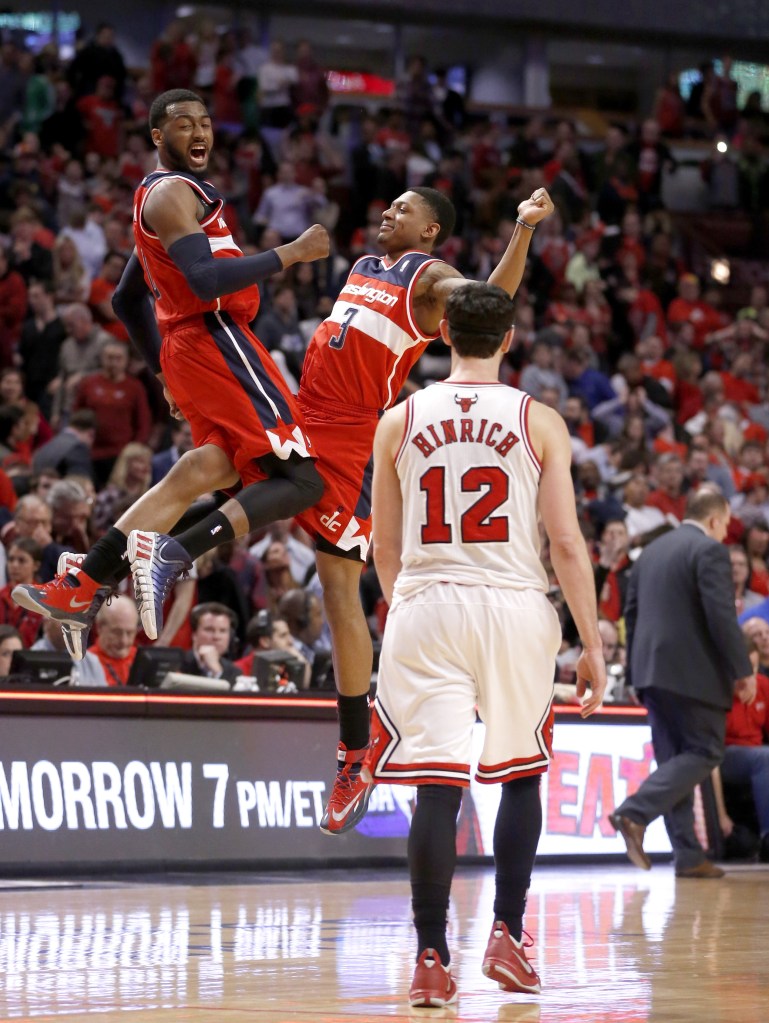