In 2012, Grantland introduced the boxing Relevance Rankings, an attempt to combine pound-for-pound talent with marketability to rank fighters according to their overall clout in the fight game. The Relevance Reports build off of that franchise by grouping a handful of fighters who fit within a certain category. This installment will consider American boxers age 30 or under who have the most potential to become mainstream stars in a sport that’s been pushed to the fringes in their native country. (To see the current overall Relevance Rankings, scroll to the bottom of the page.)

Floyd Mayweather is 37 years old and might retire after the two remaining fights on his Showtime contract are complete. That wouldn’t mean the death of boxing in the United States — American fans have proven perfectly willing to root for charismatic, gifted foreign fighters like Manny Pacquiao, Gennady Golovkin, and Miguel Cotto — but it would kill off whatever remains of the American pugilistic superiority complex. We’ve already lost the heavyweight division, which wore our “Property Of” T-shirt for most of the 20th century but hasn’t seen an American in charge since Hasim Rahman’s seven-month stint in 2001. We’ve lost the Olympics, where we went from a high of nine gold medals in 1984 to one gold, total, in the last 20 years. When Mayweather retires to a life of training Justin Bieber straight into a beating (we can hope, right?), we’ll lose our claims to the pound-for-pound and pay-per-view thrones. After Mayweather, the United States becomes about as much a boxing power as Canada. Men’s boxing goes the way of men’s tennis.

Look back at our periodic updates on which fighters matter most.
Unless, that is, someone can begin to make the leap before Mayweather steps away. At this moment, the biggest non-Floyd American stars are Tim Bradley, an inactive Andre Ward, and Bernard Hopkins (yes, still). But when you look at young Americans — which we’ll define as 30 and under — you see some hope on the horizon. You see a few fighters with the potential to become more mainstream than the sport itself if they continue to improve as fighters, say and do the right things, or, in one case, upset Manny Pacquiao on Saturday.

A couple of quick notes before we count down the five most marketable young American boxers: First, ability alone won’t get you on this list. For example, Terence Crawford possesses pound-for-pound-level talent, but he’s barely a step above Arturo Trujillo when it comes to giving an engaging interview. It seems unlikely that a soft-spoken technical fighter from Omaha will someday capture the sporting world’s attention. And second, we tried really hard to find a Latino fighter to satisfy our clichéd “next Oscar De La Hoya” needs, but nobody likes Danny Garcia, Mikey Garcia combines Crawford’s charisma with Ward’s knack for career stagnation, and exciting 122-pounders Leo Santa Cruz and Jessie Magdaleno are probably too small to cross over.

So we’re left with the following five as America’s best hopes for a mainstream boxing attraction. Or, if you prefer, America’s next best hopes after Bieber: 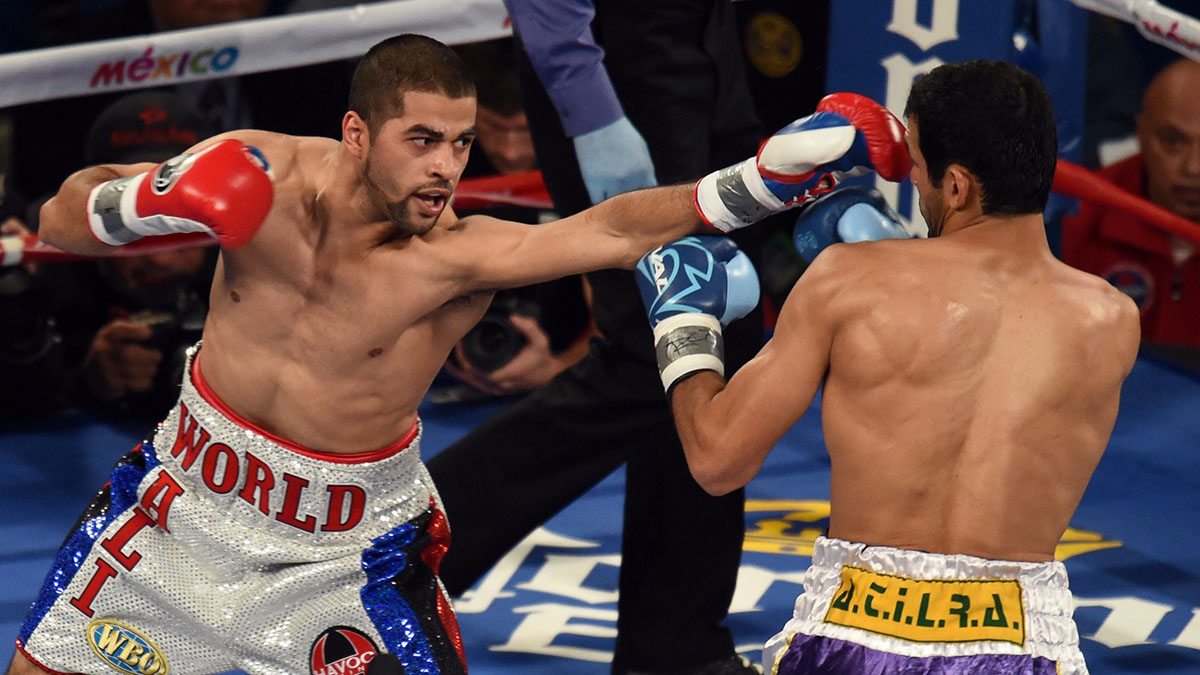 If the first name has unfortunate connotations, the last name helps make up for it. Two weeks ago, Ali wouldn’t have gotten much consideration for this list; he gave off all the warning signs of an overprotected prospect waiting to be exposed. But then he upset Luis Carlos Abregu in his HBO debut, finishing the fight in style with a ninth-round knockout just as it seemed his rugged Argentine opponent, who’d never been stopped before, was gaining strength. Ali boxed beautifully along the way and charmed the media before and after the fight. He gets a little extra bump because he was a 2008 U.S. Olympian, and a more substantial bump because he’s from Brooklyn.

Ali has one of the worst nicknames in modern sports — “World Kid” — but in his defense, nearly 150 years into the Marquess of Queensberry rules era, it’s possible that all the monikers featuring greater specificity had been claimed. Regardless, a bad nickname won’t hold the 26-year-old back if he keeps fighting like he did against Abregu and if he gets the New York fans and media behind him. 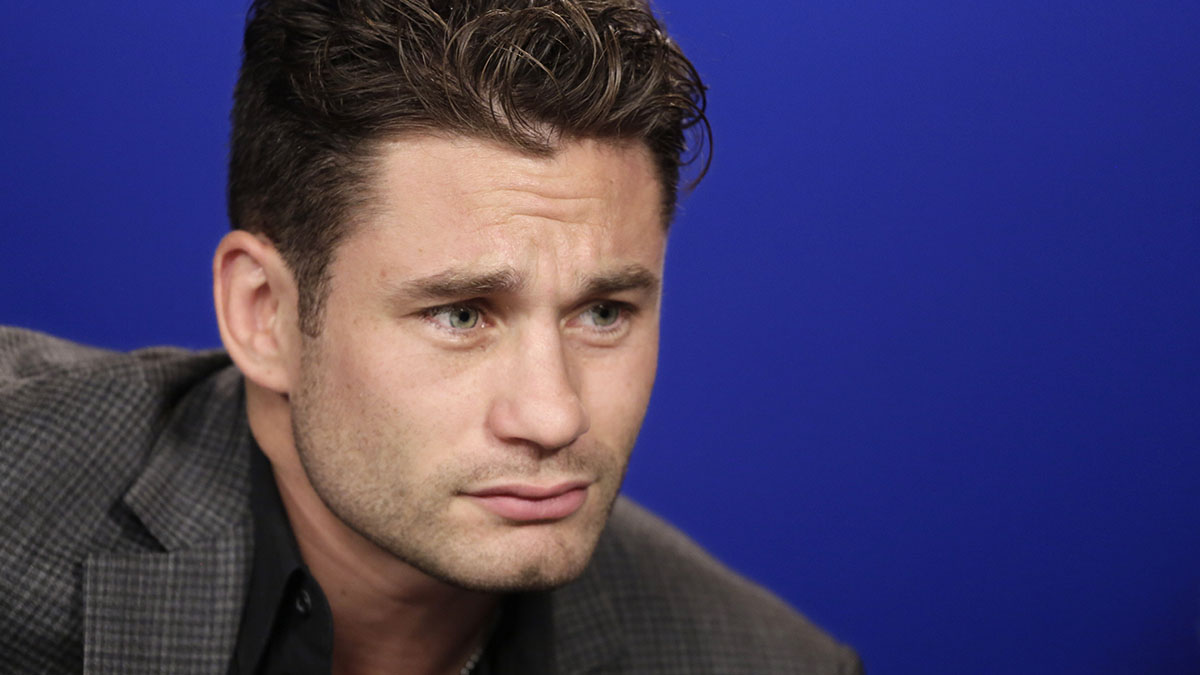 There are a lot of “ifs” attached here, the biggest one being “if he beats Pacquiao on Saturday.” If that doesn’t happen, it’s probably back to obscurity for Algieri, and we’ll all have a good laugh someday about his appearance in these rankings. But if Algieri defeats one of the sport’s two biggest stars, it’s easy to envision the Long Island kid charming all the Jimmys of late night and the ladies of The View, fending off questions from Howard Stern about sex during training camp, and perhaps securing an avocado endorsement deal. The 30-year-old Algieri is telegenic and articulate, and has an unusual narrative, at least for boxing:

His middle-class, suburban upbringing, relative eloquence, and affinities for shirtlessness and spandex have turned off many hardcore fight fans. The phenomenon has grown to the point that the boxing blog Queensberry Rules published an analysis called “On Hating Chris Algieri.” Whatever happens next with Algieri, there will be a backlash. But many hardcore fans hated De La Hoya for the same reasons, and it didn’t hurt his overall marketability. Algieri is a fighter with all of the ingredients to become recognizable to the casual American sports fan — provided that he can fight on Pacquiao’s level. 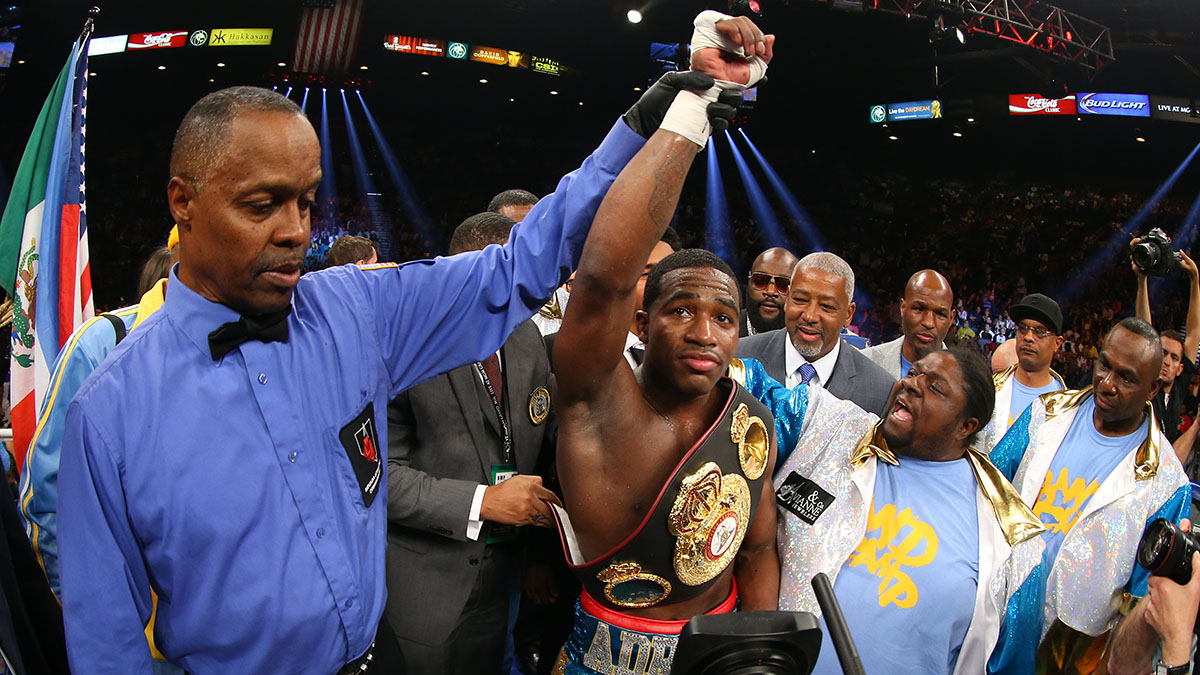 The fighter we most love to hate is also the American fighter in his twenties who has done the most to establish his name and forge an identity. It’s a loathsome identity, built on Popeye’s restroom antics and an update on Gorgeous Georg’s grooming gimmick, but it seems to stick in today’s pop culture, where Broner’s videos make regular appearances on Worldstar Hip-Hop. He’s enough of a star that he can apparently make money by charging a talent fee to come #TURNUP at parties across the country. And as Mayweather has proven, contempt can be converted into cash.

Broner was embarrassed by Marcos Maidana a year ago, but that’s hardly a death blow, both because Maidana nearly beat Mayweather for his next trick and because Broner is only 25. His athletic talent is undeniable. Jumping from lightweight straight to welterweight was probably a mistake, so now he’s settling in at junior welter. Perhaps Broner will fizzle out after his first defeat, à la Hector Camacho Jr. Maybe he’ll settle in for a long career as a solid contender who comes up short in most of his big fights, à la Zab Judah. Or maybe he’ll put it together and fill the Mayweather role semi-adequately when Floyd is gone. He’s already a name brand within the boxing community. And from a brand-building standpoint, if you can’t be Jordan, you’re better off being Rodman than Pippen. 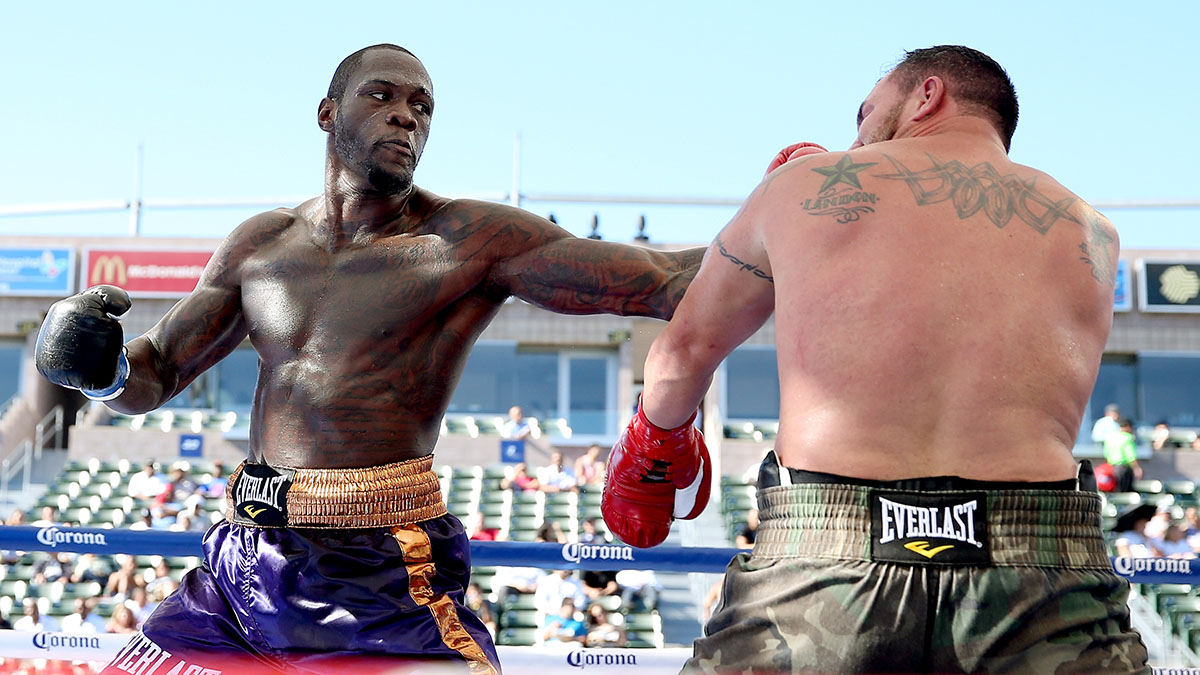 You know that heavyweight division we mentioned in the introduction? The former home of Joe Louis and Muhammad Ali and Mike Tyson? The one that hasn’t had a legit American champ in 13 years (unless you count belt holders like Shannon Briggs, Lamon Brewster, and John Ruiz, which you shouldn’t)? It is widely believed that one exciting young American fighter in this division, one puncher good enough to bring the title home, could single-handedly revive the entire sport. We’ve been waiting to find that fighter pretty much since Tyson went to prison. And there’s a strong likelihood that he doesn’t exist right now. But if he does, he’s Wilder, a 29-year-old Olympic bronze medalist who stands about an inch taller than Wladimir Klitschko and boasts 32 knockout wins in his 32 fights.

I’m not convinced that Wilder can compete with Klitschko. I’m not even convinced that he can compete with his January 2015 opponent, Bermane Stiverne. Wilder hasn’t beaten a top-20 heavyweight yet, and that’s a damning statement in possibly the worst heavyweight era of all time. Wilder represents hope, nothing more. But given the state of American heavyweight boxing, we’ll take whatever hope we can get. And if Wilder should turn out to be that guy who drills Klitschko on the chin a year or two from now, everything will change in an instant. 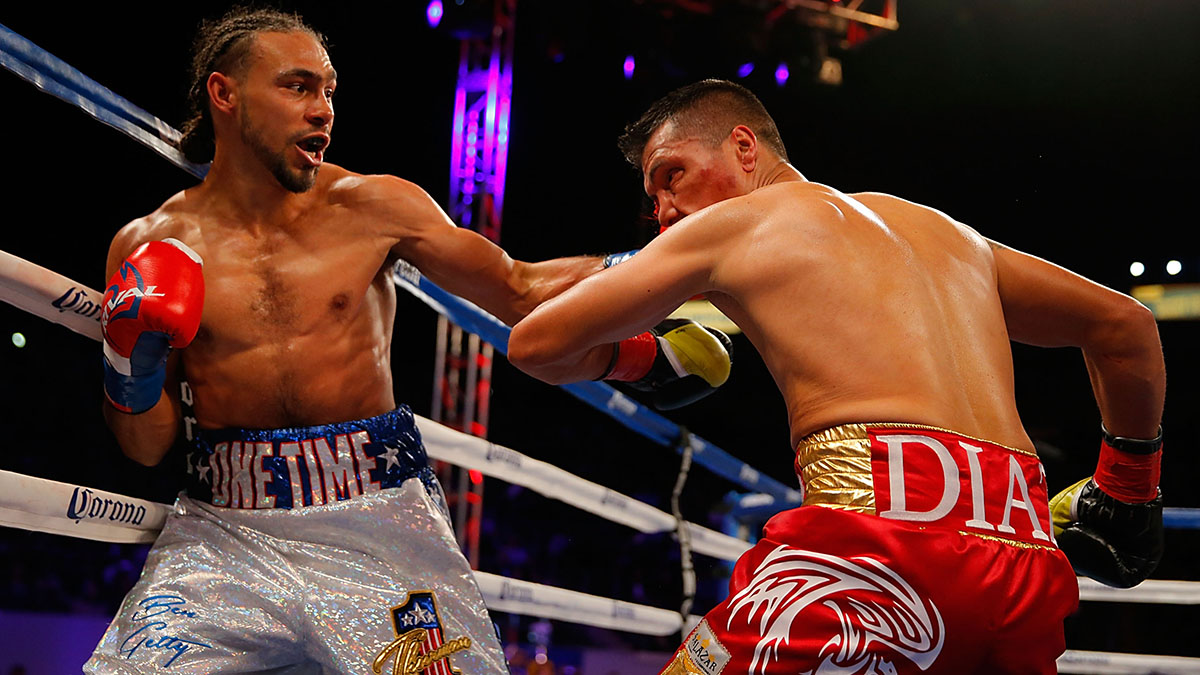 If there’s a total-package candidate among young American fighters, it has to be Thurman. Yes, he gives off an “I could kick your ass at League of Legends” vibe, and no, he doesn’t know the difference between San Antonio and a whale’s vagina. But when it comes to the stuff that matters — boxing skill, punching power, chin, willingness to test himself, fan-friendly style, outgoing personality, positioning in boxing’s most star-packed division — the 25-year-old Thurman appears to check all the boxes.

Thurman is 23-0 with 21 KOs and seems to have every fight fan on his side — provided he doesn’t let manager Al Haymon sidetrack him with soft matchmaking. A December fight against 40-year-old Leonard Bundu is mildly concerning in that regard, but if Thurman is permitted to mix with the likes of Mayweather, Pacquiao, Maidana, and Amir Khan — or maybe even Relevance Report mates Chris Algieri or Sadam Ali — he could develop the very best kind of boxing marketability: the kind that’s earned through achievement in the ring.