Did you miss out on following the NBA trade deadline this year? Good for you! You did great. Nothing was a bigger letdown than the trade deadline. Daryl Morey apparently had a chance to trade for Rondo, but decided Chandler Parsons was too important. Flip Saunders could’ve traded Kevin Love, but decided it was better to keep him and let him force a trade this summer instead. And … that was it, pretty much.

Almost all NBA trade deadlines work like this, sure, but now there’s more coverage than ever for these things, so even when there’s a “dead” deadline, you’re stuck hearing about it for 72 hours. This year’s trade news mostly just made me sad. The Bobcats traded for Gary Neal! The Clippers traded Antawn Jamison to the Hawks! Multiple teams were chasing Beno Udrih! And all my favorite NBA writers were obligated to discuss these matters, because it’s not like there was anything else going on.

It’s too bad we can’t all come to some kind of agreement on stuff like this. Once it becomes clear nothing’s going to happen, why not just ignore the story unless something big happens? The world does not need constant updates on which team wants to trade for Iman Shumpert, reminding us all that we probably spend too much energy following this stuff. When next year’s deadline is just as boring as this one, let’s just do breakdowns of crazy deadline deals from the past. Example for next year: oral history of Rasheed on the Hawks. 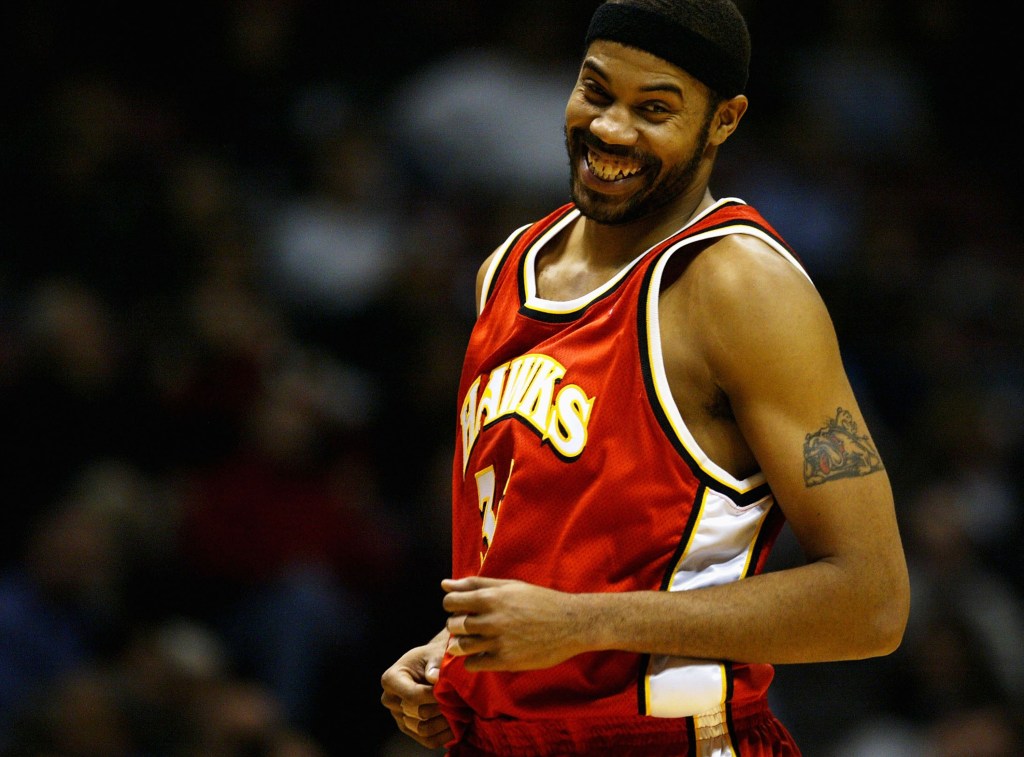 The Polish Hammer almost redeemed the entire deadline with this.

Hmmm im the only white boy left in this team:)))

That’s gotta be the best reaction to a trade we’ve ever seen in the NBA. If Daryl Morey’s the trade deadline LVP for not giving up Chandler Parsons and two low first-round picks for Rondo, at least we’ll always have MVP Marcin Gortat and his Twitter background image, which was clearly stolen from a late-’90s P.O.D. album.

Roger Goodell makes $44 million as NFL commissioner. This story actually broke at the end of last week, but discussion around it continued this week. The worst part about this isn’t even that it’s unfair or outrageous; $44 million sounds just about perfect for someone who’s in charge of the NFL. Maybe even a little low, considering the NFL generates $10 billion annually. There’s nothing wrong with the CEO of a gigantic corporation making a ton of money.

But when that corporation is “nonprofit” that enjoys massive tax breaks while capitalizing on antitrust immunity and gouging a different city’s taxpayers for new stadium deals every single offseason? Well now, THAT’S a little depressing. But Roger Goodell has distracted everyone from this reality, and the NFL gets richer every year, so hey, you can’t say he’s not earning his money. Speaking of NFL stories that will make you lose faith in humanity …

This entire Ray Rice story. Which is still not as horrifying as … 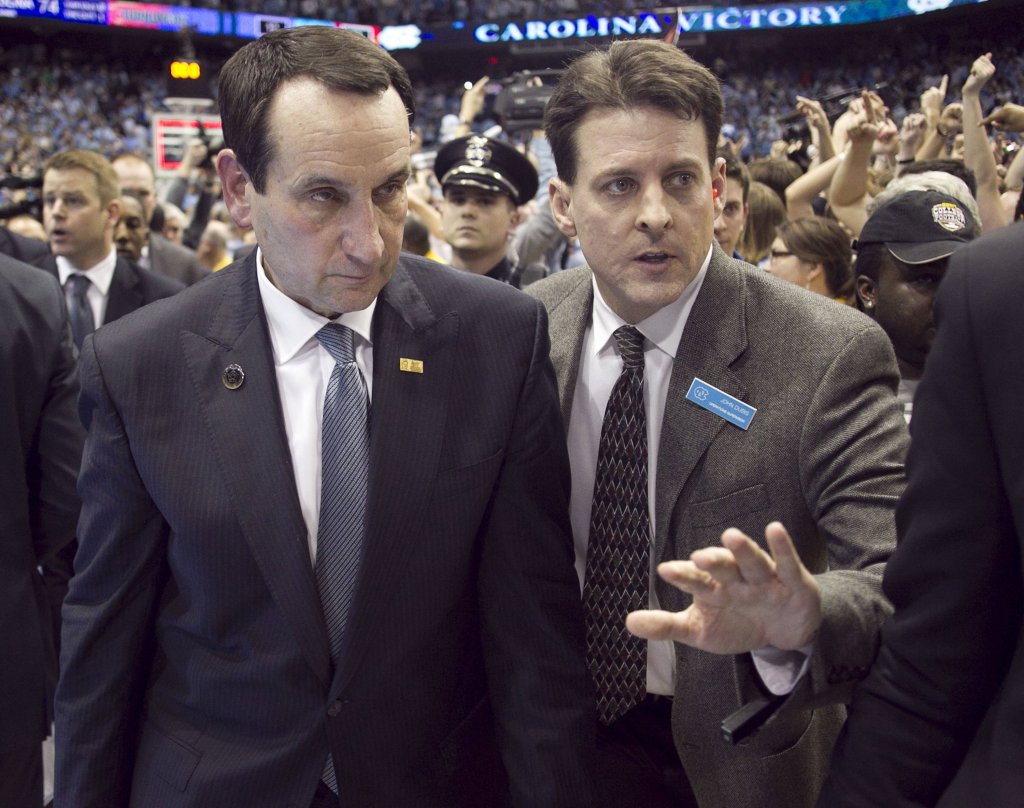 No matter how many people tell you it’s OK to like Duke in 2014, always remember it’s so much more fun to hate them.

There’s nothing original you can say about LeBron James at this point. Everything people once said about Jordan now applies to him, and I’m pretty sure even that is something I’ve already written somewhere else. There was a sequence in OKC last night where he threaded a pass through the entire Thunder defense to Chris Andersen down low, OKC collapsed, Birdman kicked it out, and the Heat swung the ball all over the perimeter in about four seconds until Chris Bosh hit a wide open three. It was basketball perfection, made all the more breathtaking for how routine it looked.

That specific play started with LeBron’s superhuman pass and led to others, but really, the entire offense is an extension of Bron’s unselfishness. The Heat play like that because their best player plays like that, and after four years in Miami it’s become a reflex for everyone. That’s part of what makes LeBron so incredible. Whenever this run is over, I’ll remember him best for turning a team full of superstars into the most unselfish, ruthless offense I’ve ever seen.

Then, when he transitions from Magic Johnson mode to Michael Jordan mode, it gets that much more outrageous. He’s been in both modes this week. Between the first six minutes of the Thunder game Thursday (14 of the first 16 points) and what he did to the Mavs Thursday (42, 9, and 6), this week’s just more proof he’s someone we’ll still be babbling about in 25 years. For now? There’s nothing to say. Just watch him as often as possible.

Perfectly acceptable, kinda funny, but then … NO. Dwight Howard gets involved at the end and makes me want to throw the computer across the room.

But you know, I’m not even mad at Dwight anymore. I just feel bad for anyone who has to play on his team and pretend to like him. This is the biggest reason I wanted to see Rondo end up in Houston, because Rondo wouldn’t play along with all this the way Chandler Parsons and Lin do. Would it have all ended in murder?

Oklahoma self-reported NCAA violations, including 3 players eating excess pasta at a banquet. Each gave $3.83 to charity to be reinstated.

It turns out Oklahoma was just screwing around here, but still, it’s great to know the letter of law could potentially be used to police pasta portions. Over the years I’ve come to really appreciate the NCAA. One day this stupid pyramid scheme will collapse on itself, and it will be great and triumphant and everything else we’ve always dreamed. Until then, though, we get to enjoy the most nakedly corrupt, openly ridiculous institution sports has left, a welcome distraction from all the other sports that are only secretly corrupt and unfair (see the NFL above). But yeah, this was fun earlier in the week. Not quite on the level with the lox bagel bylaw, but nothing ever will be.

The Phillies have allegedly been reporting violations to the NCAA when their draft picks don’t sign after the draft. I would like to officially report the Phillies for being a bunch of a mark-ass SNITCHES here, and remind you that in all matters concerning college athletics, the people who make it their job to report violations are probably as bad as the NCAA. In the Phillies’ case? Definitely worse.

Remember what it means to be a patriot.

WORST: Losing the War With Canada

We had the TV on in the office during the medal ceremony after Thursday’s gold-medal game, and NBC wouldn’t stop panning across the tearful, heartbroken faces of the American women. This was so much worse than watching them lose the actual game. During the ceremony, all you could do was remember that this is probably the biggest game of their lives, and they lost, and those silver medals will be a constant reminder of everything that slipped away in the final four minutes of that period. Maybe that’s dramatic, but it didn’t feel that way during the medal ceremony yesterday.

Just … Look at those faces. Sports are horrible sometimes.

OK, quick serious story for a minute: The Boston College sports information director, Dick Kelley, passed away at 48 years old last week after a long battle with ALS. Anyone who passes away that early is a tragedy, but Kelley struck a chord with people that made them want to share his story with everyone who never knew him. You can find tributes all over the internet, but this Sports Illustrated piece is a good place to start.

I went to BC but never knew Kelley; all I can assume is that he wouldn’t have inspired this much public grieving if he hadn’t been an amazing person while he was here.

His funeral was Monday, scheduled that way so the BC basketball team could attend the service and still play later in the week. BC basketball has been awful this year. A team that was supposed to compete near the top of the ACC has won six games so far. But Wednesday night, two days removed from the funeral, they went out and beat Syracuse. There are plenty of stats and percentages to show how amazing this was in a basketball sense, but the Kelley connection put it over the top. I still can’t believe that really happened.

Anyone who loves sports will inevitably get stuck defending their obsession for a lot of their life. It’s objectively stupid to get emotionally invested in things like the trade deadline, or what MVP really means, or who’s on Mount Rushmore, or 90 percent of other stuff sports fans spend their time arguing about. People waste time with all kinds of hobbies, but nobody wastes time more aggressively than sports fans.

But anytime someone asks me why sports are worth it, it’s because all this is real. As stupid and contrived as this whole universe seems sometimes, those U.S. women really did spend their whole lives getting ready for that game Thursday. Watching them lose hits you in a way no TV show or movie can compare to. And just the same, a guy like Dick Kelley dedicated a huge part of his life to BC sports. And BC was horrible this year. And they had to play the no. 1 team in the country on the road two days after his funeral. And they won.

There are times when sports gives us stories so incredible you’d think it was some hacky movie script, except it’s all really happening. We get stories like that every few months with sports, and it makes all the rest worth it. Those are the nights when it seems insane that anyone wouldn’t spend their whole lives following this stuff. And watching BC celebrate Wednesday, remembering Dick Kelley … Wednesday was one of those nights.

An overgrown 12-year-old with severe ADHD and poor motor skills is allowed to play professional basketball on a nightly basis. When all else fails, Psycho T will always put a smile on your face.