The reports of Barcelona’s death may have been greatly exaggerated. This season has started as perfectly as possible. Any worries after a  scoreless draw at Málaga last week were swept aside by Lionel Messi & Co. when they put six on Granada in the next match. New manager Luis Enrique has guided his team to the top of La Liga’s table, with 16 points from their first six games. Barcelona have yet to concede a goal, and, scarily, they are nowhere near their peak form. Luis Suárez has yet to play a minute for his new squad, and Neymar is only now rounding into shape after his World Cup injury. Barcelona’s decline, to the extent that there ever was one, appears to have been arrested. And it’s all thanks to evolution.

About that “decline.” Barça came within 45 minutes of winning La Liga and reached the quarters of the Champions League last season. So decline is a relative term. But like almost everything related to Barcelona, their problems, like their successes, had to do with the manifestation of a philosophy. Gerard “Tata” Martino was brought in last season to bring the club out of the Pep Guardiola/Tito Vilanova era, introducing a new, more direct brand of football, signaling a move away from the tiki-taka system of the last half-decade.

Martino’s ideas never quite took. Now, with the Argentinian Martino out, and Barcelona-bred Luis Enrique in, the concern was that the team had given up on evolution altogether. Those concerns grew louder during the summer transfer window, when the club seemingly repeated past mistakes, substituting one midfielder for another (Ivan Rakitic replacing Cesc Fábregas) and again failing to address long-standing defensive needs by only bringing in 30-year-old Jérémy Mathieu and parking-challenged Arsenal backup Thomas Vermaelen. Six games in, those concerns are proving to be completely unfounded.

Not coincidentally, Barcelona’s evolution is tied to Lionel Messi.This is a new Messi. He’s shooting less this season — 3.37 shots per 90 as compared to 5.51 last season (all stats courtesy of ESPN Stats & Info). He’s also creating more chances for his teammates, up to 3.85 chances created per 90 from 2.55 the year before.

Messi has also changed where he operates. Increasingly, over the last few years, he has played directly in the center of the field, using the midfield base of Xavi, Andrés Iniesta, and Sergio Busquets as a platform from which to be awesome. To dramatically oversimplify things, Barcelona’s plan, under Guardiola, was to play an endless array of short passes, designed to draw out defenses and midfields. Eventually, Messi would end up with the ball at his feet, running at a frantic defensive line. Martino was supposed to move away from this style but never did. Here’s a heat map of where he received the ball during the 2013/14 season: 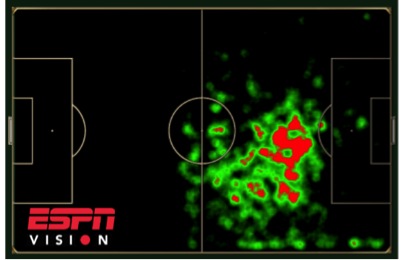 This season, things are somewhat different. Just like Messi’s numbers have started shifting, his positioning has begun to open up. Rather than relentlessly pounding the middle of the field, he’s moved more toward the right, slightly more like a traditional inverted winger, despite playing as a central forward.

Practically, this means Messi is attacking from slightly different angles. Before, he would use all of those short passes to get into terrifying central locations. Now, he will also attack from slightly wider positions on the right side of the field. That, in turn, gives Neymar more space to work, coming in off the left flank, and likely will also eventually provide Suárez with some room to operate centrally without clogging up the spaces where Messi likes to be. And the only cost/drawback is that Messi is more often a facilitator than an attacker.

Against Granada, on Saturday, Messi broke out the full arsenal on his way to an absurd two-goal, two-assist performance. Some of what he did was normal-for-Messi stuff — brilliantly timed runs to get into space in the box; dropping into the midfield to pick up the ball and play an inch-perfect through ball. But some of it was just a little bit different. Before the game was a blowout, when Barcelona was only up 1-0, Messi set up a Rakitic header.

Messi works cleverly to get a very good cross in with his weaker foot, against essentially four defenders who are preoccupied with nothing but containing him. Messi being Messi, he makes it look suspiciously ordinary. This is, after all, a simple passage of play — a winger and a fullback combining, the winger getting to the byline and putting in a cross for a midfielder making a late-arriving run. It’s something that every team in the world does. What makes it striking is the precision, creativity, and technique involved. But then again, that’s Barcelona, right? Making the simple pass, the obvious run, the proper amount of spacing — making it all look like art.

Alves and Xavi there: pure Barcelona. But, under Enrique, the team has varied its approach just enough to add in new threats. 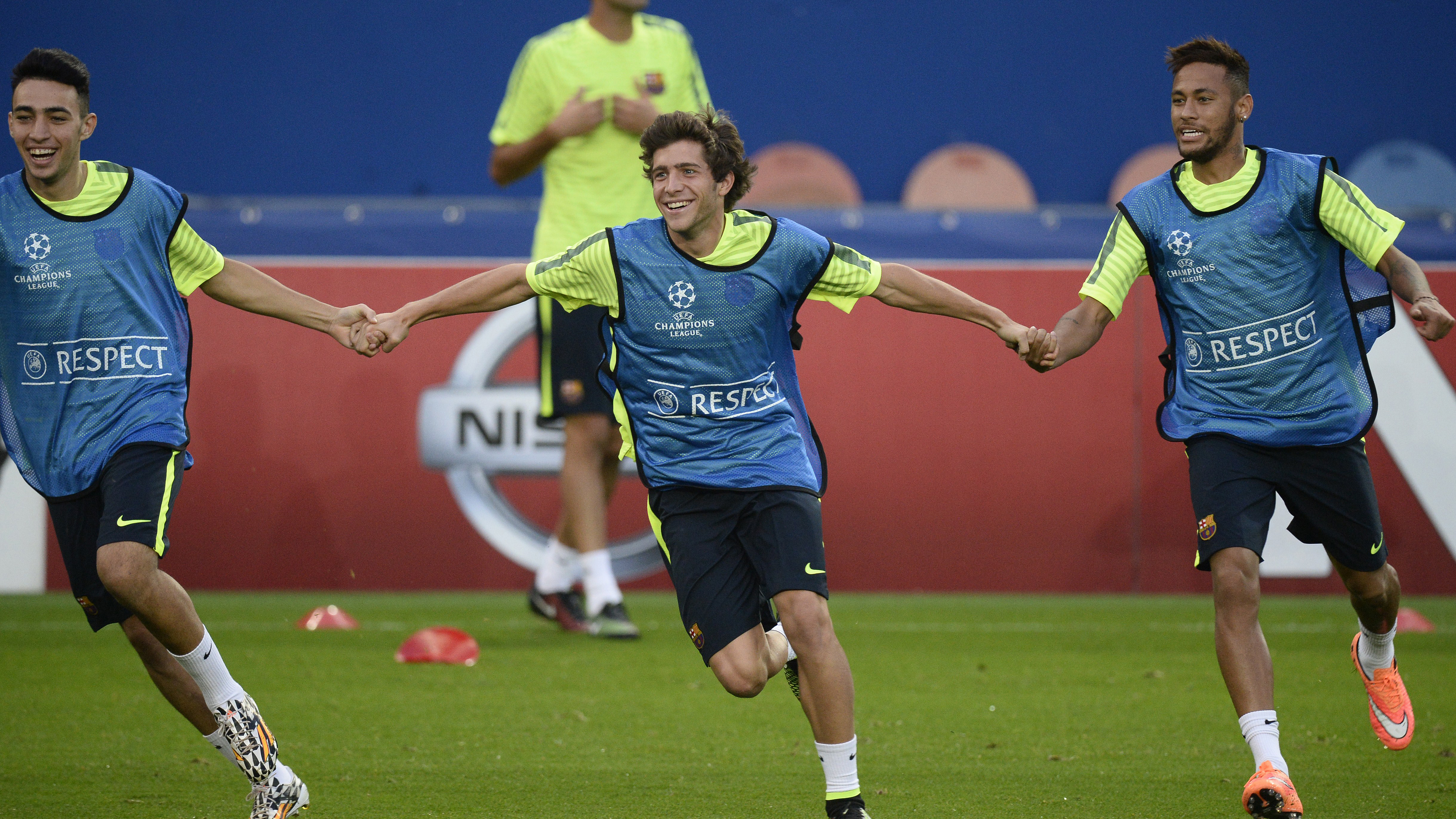 For the first time in years, the vaunted La Masia academy is actually paying dividends. Enrique has had plenty of youth products to fill out the squad this season. He has been committed to rotating his players, and with veterans Alexis Sánchez, Alex Song, and Cesc Fábregas gone, and Xavi’s minutes greatly reduced, there’s a lot of playing time to go around.

Enrique was the manager of Barcelona B during most of Guardiola’s tenure, which means he has experience bringing along young players. He has given serious minutes to debutantes Sandro and Munir, two 19-year-old wingers from the academy, often selecting them ahead of the stalwart veteran Pedro. Sergi Roberto, one of the few prospects to get any playing time last year, continues to be integrated into the squad, and Rafinha is back on loan and seeing minutes as well. Only a year ago, Barcelona was looking old and worn out. All of a sudden, the club is overflowing with young talent.

It’s your favorite part! As the Málaga draw proved, there’s still a tried-and-true way to play Barcelona: defend deeply, narrowly, and diligently, and you can frustrate them.

Barcelona’s changes don’t do anything to address that tactical reality. They haven’t developed a Plan B, they’ve just diversified Plan A. If you can defend that way, then eventually you will also get chances on the counterattack, and Barcelona’s defensive personnel remain questionable at best.

Speaking of personnel! If holes in the roster do develop, the club will likely be unable to address them in the transfer market, since they have a one-year transfer ban looming.

Finally, there’s the matter of Luis Suárez. His skill is undeniable, but will it translate in the very specific framework of Barcelona’s style? Some players adjust seamlessly, like Rakitic seems to have. Others, like Neymar, take some time to find their feet. Some, like Zlatan Ibrahimovic, never click. It’s not a foregone conclusion that Suárez will slot right in without a hitch.

Barcelona’s strong start to this season is very encouraging. They have a tactical plan to address life post-Xavi, and a way to compensate for some of the predictability that had crept into their play in the last two years. Luis Enrique has recognized the attention Lionel Messi receives and used it to create room for his other stars. Barcelona haven’t faced many serious challenges yet, but it’s important that Enrique has recognized the issues that need to be fixed going forward, and has been willing to look internally for solutions.

If Barcelona want to regain their perch as the best club in the world, those are the resources they’ll need to use. There’s a long way to go, but the first month of Enrique’s reign sure seems like a step in the right direction.