So many times, so many, many times, Andy Murray screamed, gnashed his teeth, wailed, curved his back, and hunched his shoulders under the weight of his ignominy, screwed up his eyes, bared his teeth, worked and flexed his mouth with the same astonishing intensity that he ran down Novak Djokovic’s violently angled cross-court shots. His gaping mouth seemed a dark and awful window into his maw; by the end of the match, the clench of his fists seemed a tight grip around his own neck. He ranted, he raved, he gave a sarcastic thumbs-up to his own box; he shouted in long Falstaffian soliloquies; he yelled words in salty Anglo-Saxon, swearing like a sailor or Kim Sears. Following one Djokovic winner, he even screamed, “SO MANY TIMES!!!”

These temper tantrums were appalling, delightful, pitiful, funny, woeful, and not at all surprising — because, ladies and gentlemen: Andy Murray! This is what Murray does: He talks to himself on changeovers, he boxes at his shadow, he rolls his eyes and finds nowhere for them to rest; he is Job amid the locusts. An innocently errant shot is all it takes to set him off. But on Sunday he performed the role of Andy Murray, whinger, with such gravity on such a big stage that it seemed like it had to mean something. So after Murray lost the Australian Open in four sets, 7-6 (5), 6-7 (4), 6-3, 6-0, in the men’s final — trounced in a match that had begun with such soaring promise — it seemed easy to blame the swears, the mood, the emotions, the weak mind, maybe even the woman in his coaching box.

Murray has a chip on his shoulder the size of Australia, and every so often, when he’s done a little too much to quiet the critics, when he’s done what everyone doubted he could do, he takes a pickax and starts whittling that chip deeper. He heard what people were saying about his choice to double down on Amélie Mauresmo — a decision that involved choosing between her and his longtime hitting partner, coach, and friend, Dani Vallverdu — and the not-so-quiet doubts of whether it would last. By the time he faced Vallverdu’s new charge, Tomas Berdych, in the semis, the chip had become a ravine. The match crackled with friction, a few sparks from a straight-up fight — even Murray’s fiancée, Sears, was caught on camera calling Berdych a “flash fuck.” (Sears wore a “Parental Advisory: Explicit Content” T-shirt to the final, thus proving she is the real winner of this Australian Open.)

Murray had played down the coaching narrative, but he really asked for it: He ended the match with a proud defense of his coach in an on-court interview. “So far this week I think we’ve shown that women can be very good coaches as well,” he told the crowd. After his loss to Djokovic in the next round, perhaps the press has supplied a few more pickaxes for him to whack at his chip. As the New York Times wrote in a characteristic account, “Despite Murray’s often-inspired play earlier in the tournament and in the first two sets of the final, it was difficult not to interpret Sunday’s gesticulations and running monologue as regression — the kind of distraction he tended to avoid when Ivan Lendl, his former coach, was sitting stone-faced behind his sunglasses in the players’ box. With Lendl in his corner, Murray won the 2012 Olympic gold medal in singles, the 2012 United States Open and Wimbledon in 2013.” This is a little bit of revisionist history; Lendl was in Murray’s box, after all, in 2013 at the Australian Open, when Murray played a dismal, only superficially close final against Djokovic — a match in which Djokovic outclassed Murray in almost every way, and in which Murray paused before serving because he saw a stray feather on the court, moved it, and promptly double-faulted.

Murray is a better player at this Australian Open than he was then, and a much better player than he was a few months ago. He’s fitter, faster, more aggressive; he’s moving to net, varying his shots, using his athletic power and his gentle, soft hands. For the better part of two sets on Sunday — for two and a half hours at the end of two weeks of working his way through a devilishly difficult draw — Murray played brilliant tennis. He did it against an opponent who was his match. He and Djokovic shrunk and stretched the court, creating angles with both cunning and brute force; they lined up return winners, tracking fast serves with the eerie focus of birds of prey. Occasionally the camera would zoom back and high for an aerial view, and you’d see them moving as dancers and boxers do — feinting sideways, or darting up while the other pulled back, racing and reversing, anticipating and responding, in sync, as if connected by some strong force.

Djokovic, who, in a shaky match against Stan Wawrinka in the semifinals, hadn’t hit a single winner — not one! — during the fourth set, started the first set almost perfectly, with 14 winners and one unforced error, and he wasn’t even really the better player. It was as tight as it could be. Even as the winners and errors began to even out, the quality barely dropped. Some of the misses were more painful because they came on perfectly set-up shots — a backhand into the open court pushed long; a scything backhand sweeping wide. And some of the misses were more painful because they were just painful, coming at the end of long, physical rallies — 15, 20, 25 shots, and not of the probing, patient kind. Then they’d do it all over again. You had to marvel at their defensive skill, unparalleled except in each other — but of course if both players are playing spectacular defense, it suggests some pretty spectacular offense. Murray was particularly aggressive, especially with his forehand, which he blasted down the line for regular winners and used to open up the court. At the start of the third set, the match tied one set all, Murray raced to a 2-0 lead. Then he won only one more game in the entire match.

It was painful to see — the poor decisions, the loose errors, the way he seemed unable to push Djokovic when the Serb looked so fragile that he was practically falling over all on his own. The long rallies became shorter; Djokovic took control and Murray helped him. The fourth set was almost immediately foregone.

Watching him rant and slump and grimace, I thought of something Maria Sharapova’s father, Yuri, had said to her on the phone after she’d nearly lost in the second round. He’d called her, she told the press, and told her — this is the “nice version” — that her play was “unacceptable.” “It is much easier just having a normal home life,” he told her. “I don’t know why you’re suffering out there for nothing.” 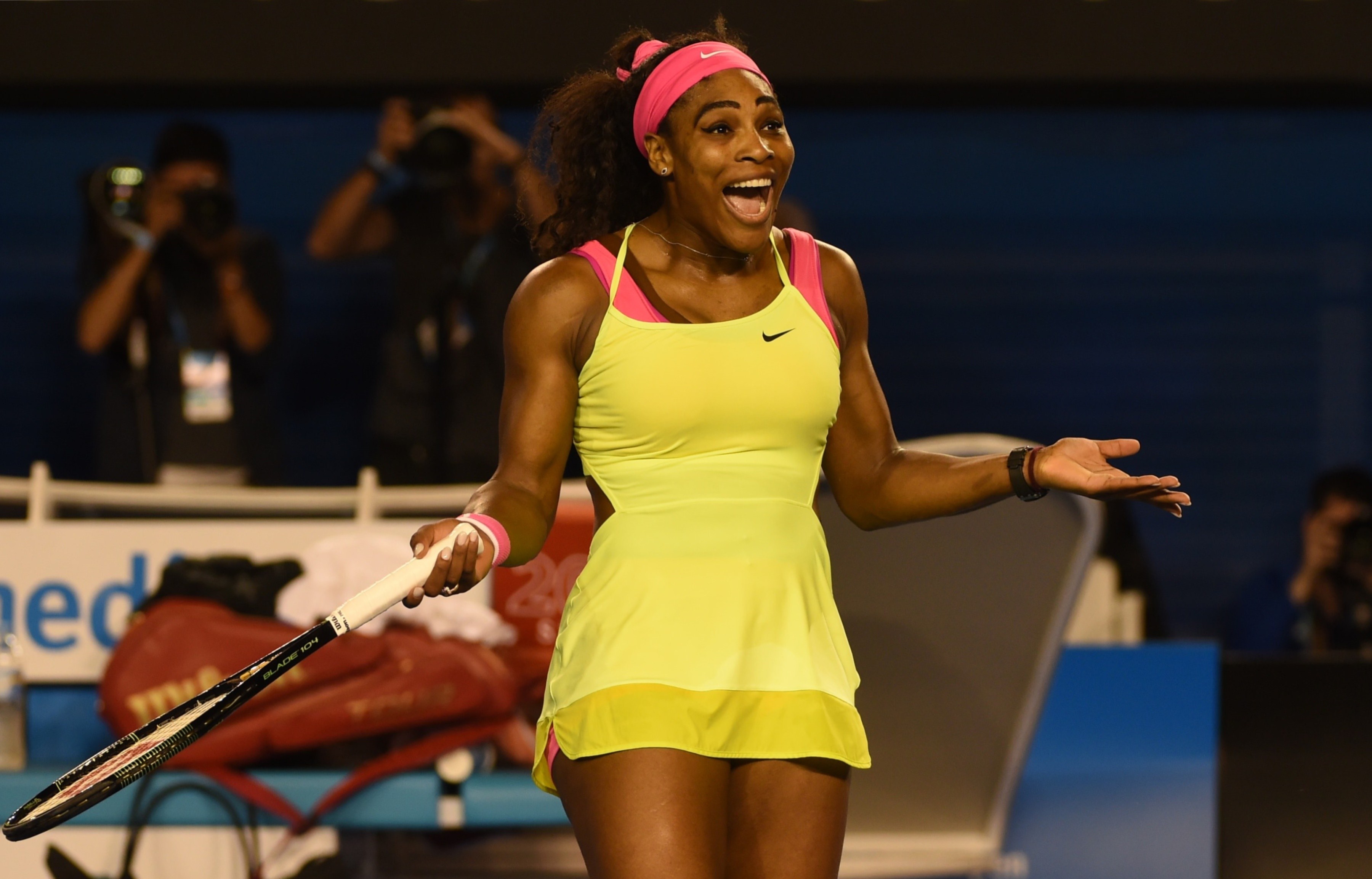 Why athletes are willing to suffer so much is a pretty clichéd question. Still, it’s maybe the central question. Why suffer? Why put yourself through hell? Why, really, does anyone do anything hard? Why be wakeful through dark nights of the soul? Does Maria Sharapova have to scream so desperately, so desolately? What gives her the will — what’s at the bottom of that competitive spirit — to go out, play one of the better matches of her life, and lose to Serena Williams for the 16th straight time, as she did on Saturday in the women’s final? What gives Djokovic, barely able to stand up yesterday, suffering what he would later call “a physical crisis,” the strength to win the fourth set 6-0?

I can’t answer those questions; I can’t read their hearts. I can only watch them stand at the baseline and pause to serve, their minds beyond thought but not always beyond doubt.

It was Murray’s weak second serve and a few ill-timed double faults, along with his inability to push his ailing opponent into longer rallies from the third set on, that cost him the match. That was true even before the outbursts began. Murray won only 14 of 41 second-serve points; Djokovic, by contrast, won 34 of 55. If you want a telling stat, it’s this: Djokovic’s second serve was 24 kmh faster than Murray’s on average. Likewise, it is Sharapova’s serve, always shaky, that will always be the biggest difference against Serena. Against Sharapova, Serena hit 18 aces, including one on match point (or two, if you count the ace that was called a let).

Some people play to prove themselves to others. Perhaps others play to prove themselves to themselves. Maybe Serena’s serve is the best answer I can offer. Serena did not play her best tennis until the semifinals; in the first six rounds of the tournament, she faced 31 break points. She responded by making 23 first serves and winning 21 of those points. Eight of the serves were aces. She expects that every serve should be an ace; she seems almost disappointed when any serve is not. Her serve is the source of her unusual, surprising equanimity. When she hits an ace, she is equal to herself.