Last Saturday, after Penn State nearly lost a football game to Army, James Franklin launched into a staunch and passionate defense of unabashed positivity in the face of plodding mediocrity. This was at the tail end of a slate-gray central Pennsylvania afternoon interrupted by periodic bouts of rain, after a blunt and inexplicably tense 60 minutes that felt in every conceivable way like a vast underachievement, except on the scoreboard, where Penn State eked out a 20-14 victory. And inside the bowels of an aging stadium that may soon become obsolete, somebody asked Franklin, the Nittany Lions’ second-year head coach, about fans’ expectations and point spreads and how this victory compared to Penn State’s epically embarrassing season-opening loss to Temple.

Franklin’s response was a tacit admission that he knows something is not right here, that he is coaching a team that appears both uninspired and uninspiring on offense, despite the fact he has Christian Hackenberg, one of the most coveted NFL prospects in the country, playing quarterback. But it was also a defiant reinforcement of his entire approach to coaching, which is that there is nothing to be gained by wallowing publicly in his problems. I’m going to feed you as much bullshit as I possibly can, Franklin essentially told the media, because brutal honesty does me no good right now.

And maybe Franklin is right. Maybe genial jingoism and a confession of innocent naïveté about the shadowy art of point spreads is his best strategy at this juncture. Maybe none of this matters if Penn State somehow gets it together during the Big Ten season; maybe if a 4-1 record against inferior competition blossoms into a 9-3 or 10-2 finish, no one will care about the steady stream of glossy cheerleading that Franklin pushes out into the world. This, after all, is what’s made him one of the best recruiters in the country; this, I presume, is why Penn State hired him to replace the often brutally honest Bill O’Brien, as the administration wanted someone who could transcend the negativity that had overwhelmed Penn State in recent years. Hell, this is a place known to outsiders as Happy Valley: Why shouldn’t the football coach here declare his undying love for Penn State’s school colors, and say things like, “I’m going to come in here every single week and be positive”?

At heart, Franklin is a salesman. That doesn’t necessarily have to be creepy or skeevish; it worked at Vanderbilt, where he managed to put a shiny gloss on a historically moribund program. But I think there is a concern at Penn State right now that no one really knows what, exactly, Franklin is trying to sell us, and whether it’s merely an empty pitch for a subpar product. There is still an emotional chasm in this town, and it remains to be seen whether Franklin possesses either the proper emotional makeup or the requisite raw materials to fill it — either as a coach and mentor to young prospects like Hackenberg or as a salesman.

Someday I would like to be able to write about Penn State football without feeling the need to reference The Awful Thing That Happened, but I don’t think we’re anywhere near that point yet. Four years have passed since the grand jury report about Jerry Sandusky’s horrific crimes against children was released to the public and triggered a national scandal, which is enough time in a college town that the student body has essentially turned over completely, but not enough time to allow the moment to properly recede from a news story into a historical event.

During the five days I spent in State College last week, at least two Sandusky-related stories made the front page of the local paper, The Centre Daily Times: one about Sandusky’s ongoing attempts to appeal his conviction, and one about a former board member of Sandusky’s children’s charity, The Second Mile. Bruce Heim, a military veteran, was due to be honored during the coin toss of the Army game until people began to point out Heim’s ties to Sandusky. At that point, Penn State president Eric Barron was forced to backpedal and issue a press release in which he rescinded the invitation to Heim, saying that it “has reopened deep wounds in our community that do not involve his service to country, but have distracted the public from the purpose of the day.”

These distractions arise all the time, of course. History still intrudes into every major decision at Penn State. As the university decides whether to renovate the drab erector set known as Beaver Stadium — where the same man spent nearly 50 years as head coach — or build an entirely new facility on campus, the question lingers among a relentlessly vocal faction of alumni about how to properly reconcile the legacy of Joe Paterno with the Awful Thing that brought him down. Some raise reasonable concerns about the potential whitewashing of the past, while others have veered into unhinged magic-bullet conspiracy theories.

Franklin, like O’Brien before him, has adeptly dodged these questions — when somebody asked during his radio call-in show whether the new stadium should be called “Paterno Field,” his answer was as non-committal as you’d expect it to be — but under the surface, these concerns are unrelenting, and will most likely continue to arise until enough time passes that history can address the moral complications. 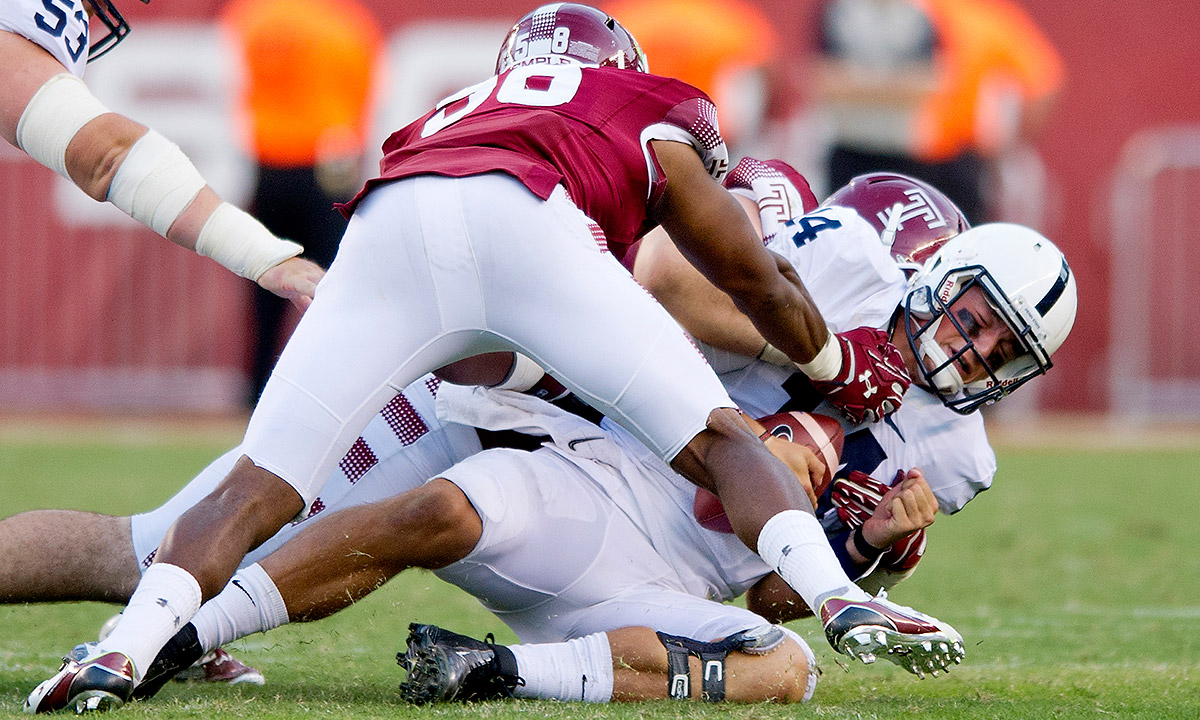 So for now, there is an overarching uneasiness about both the past and the future, punctuated by occasional glimmers of hope within the present, like those that a dynamic freshman running back named Saquon Barkley gave before he got hurt and missed the Army game, like the strokes of occasional brilliance Hackenberg flashes amid a frustrating lack of synchronicity, like the overwhelming presence that defensive linemen Anthony Zettel and Carl Nassib bring.

Penn State’s offensive line play has been better since the Temple meltdown, in part because Franklin and offensive coordinator John Donovan have (according to Franklin) begun “call(ing) the game in a style to allow us to be successful.” And I suppose there’s a sense of almost inadvertent tradition in that, since Penn State fans spent years complaining about Paterno’s buttoned-up play calling and are now seeing the same thing from yet another offense that has resorted to overarching conservatism out of necessity. But this weekend, the Nittany Lions host an Indiana team that nearly upset Ohio State, and after that they travel to face the Buckeyes, and it’s very possible they’ll be sitting at 4-3 after that stretch, on the way to yet another 6-6 or 7-5 season that would feel even worse than that, given that Penn State is no longer burdened by NCAA sanctions and given that this may be Hackenberg’s final season at Penn State.

On Tuesday at his weekly press conference, Franklin didn’t explicitly mention Paterno, but on the heels of his attempt to explain that his bullshit comes from an honest place, he was asked how he reconciles what he’s feeling internally with what he projects externally. He spoke of Penn State’s national championship teams in the 1980s, and he confessed that getting people excited without setting up false expectations was “the hardest part of my job.” In some ways, this is not a unique issue: The fan base of every program that was once historically great expects that historical greatness will come upon it once more. The added complication for Penn State is that this history is larded with deep wounds that continue to be reopened. I can’t blame James Franklin, then, for trying to salve those wounds with relentless positivity — with a sense that all is well, even when everyone knows it’s not.