It is a rare thing to have one’s career success reach a quantifiable peak, but this actually happened to Lance Leipold: The numbers became immutable. In 2014, his football team at Wisconsin-Whitewater went 15-0 and won the Division III national championship, as the Warhawks had done the year before, and as they had also done in 2011, 2010, and 2009. When last season ended, Leipold’s record as a head coach at Whitewater was 109-6, which translates to a 94.7 winning percentage; heading into the 2014 season, Leipold’s record as a head coach was 94-6, which means that after another perfect year, his success rate inched upward less than one percentage point.

This was not the only impetus for Leipold to begin searching for a new challenge, but it was a metaphor for his thought process; it was a reason for him to begin asking himself what else he could possibly prove if he stayed in place, and if his own near perfection might begin to victimize him. There was no urgency to leave: Leipold was a Whitewater graduate, and his father lived in town. He could have remained there for the remainder of his career if he wanted, but at some point, following one of the greatest eras of success in college football history, he grew restless. After the Warhawks lost an unfathomable three games in 2012 (half of Leipold’s career total), he embraced the challenge of refocusing the program, hired several new assistants, and then won 30 games in a row, defeating rival Mount Union for the national championship in 2013 and 2014. Amid all of this, one of the school’s boosters had said, half-jokingly, that if the Warhawks didn’t win a game by 28 points, they should count it as a defeat.

Leipold also turned 50 in May 2014, which meant that if he were going to attempt to make the leap up to a Division I coaching job, he’d have to do it soon. And so he began having conversations with people about what it would take to coach major-college football, some of which were informative and some of which were (in my words, not his) inherently condescending: the FCS athletic director, for instance, who told Leipold he needed to look to be an FBS assistant coach before he could get a job at an FCS program, or the pair of FCS athletic directors who asked if he could recruit at that level, roughly five days after Leipold had won yet another D-III national championship.

But then Leipold met with Buffalo athletic director Danny White, who, after firing coach Jeff Quinn, approached his job search with a radical notion. “His research says guys who are successful are guys who have been head coaches before,” Leipold tells me over the phone. “I looked at myself as more of a big-picture guy from day one.”

And so in December, Leipold was hired as the head coach at Buffalo, a Mid-American Conference program with mixed historical success that now becomes a proxy for both White’s thinking and for the seemingly facile notion that football is football, regardless of who’s playing it. 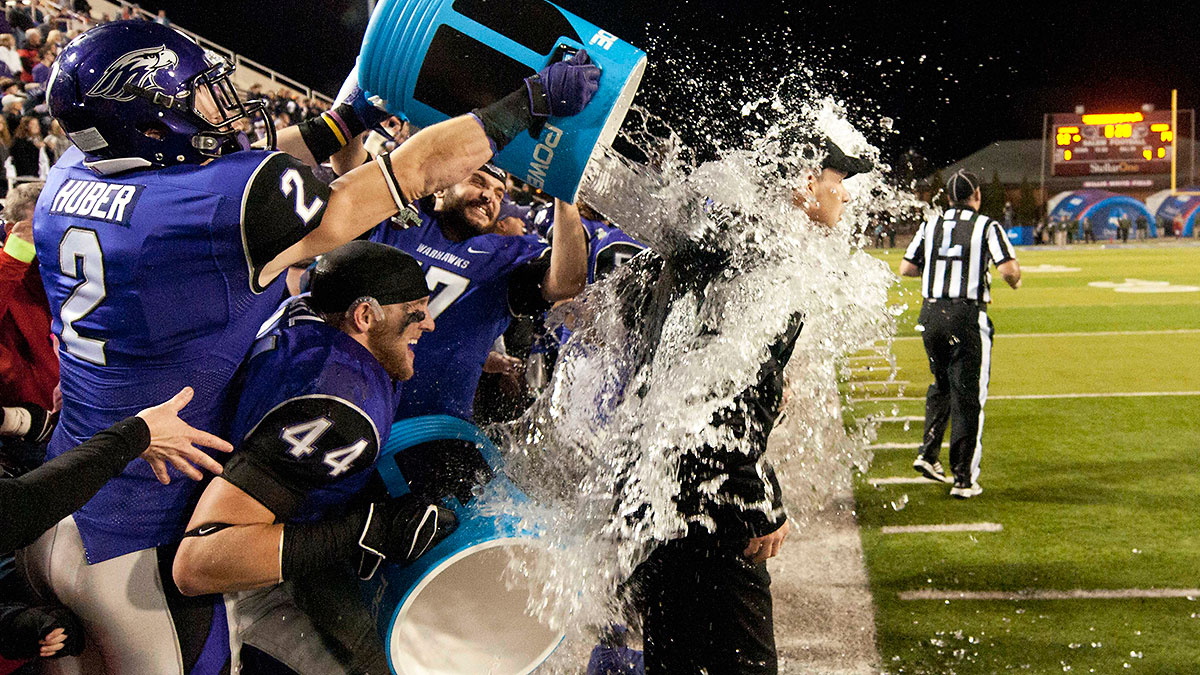 Don Petersen/AP Leipold managed a remarkable 94.7 winning percentage during his time at Wisconsin-Whitewater.

Part of the reason those questions about Leipold’s abilities felt so patronizing is because he did coach at higher levels before he went to Whitewater: He was a graduate assistant at Wisconsin from 1991 to 1993, and worked at Division II Nebraska-Omaha for seven seasons before working at the University of Nebraska from 2001 to 2003. That, combined with his epic success at Whitewater, is an enticing résumé in itself, especially given that the point of entry to becoming a major-college coach has shifted in recent years. Arizona State’s Todd Graham, SMU’s Chad Morris, and Auburn’s Gus Malzahn were all high school coaches before they moved up the ladder; Tony Sanchez got hired straight out of nearby Bishop Gorman High to coach at UNLV; Joe Moglia was the CEO of TD Ameritrade before he worked his way back into college football and became head coach at Coastal Carolina, where he’s led his team to the FCS quarterfinals two years in a row.

The traditional template has been defied enough that there’s no reason to believe that Leipold doesn’t have a chance to be successful, as well. Leipold had a conversation with former Buffalo coach Turner Gill before the job even came open, and Leipold is convinced Buffalo has the resources to be successful in the MAC. He hired former Notre Dame assistant (and ex-Akron head coach) Rob Ianello to be his point man on recruiting. His pitch to recruits revolves around (a) the idea that Buffalo itself is a city on the rise, (b) the fact that the university is fundraising for an indoor practice facility,1 and (c) the notion that Buffalo is the only AAU-accredited university with an FBS program that isn’t playing in a Power 5 conference.

The Bulls are one of the few MAC teams that don’t have one, which, given the conditions in Buffalo, verges on the insane.

Maybe that will work, and maybe it won’t. But Leipold’s strength as a coach, and what elevated Whitewater above its competition, is that he was able to instill a sense of structure and discipline that few other programs had. He tells me that he spends much of practice watching body language. He’s a detail-oriented guy who has little interest in merely calling plays or micromanaging; he’s willing to incorporate ideas from his assistant coaches, many of whom he brought from Whitewater to Buffalo so he could feel surrounded by people he trusted. There are more employees to manage now — more support staff, more managers, more equipment people — and fewer lulls in recruiting, along with the more difficult competition, but Leipold tells me he’s still constantly asking, “How can we do this or that a little bit better?”

And that’s the thing about the MAC: It’s traditionally been a laboratory for coaches with unconventional ideas who came from unconventional places. Urban Meyer and Nick Saban, the two best coaches in the FBS and two of the best in college football history, both began their head-coaching careers in the MAC. Northern Illinois’s Rod Carey, the coach of the league’s most consistent program in recent years, was an assistant at the University of Wisconsin–Stout (which plays in the same conference as Whitewater) from 2000 to 2006. You could point out that Carey stepped up to jobs at Illinois State and North Dakota, and then became an assistant at Northern Illinois before getting the head job — you could argue, in other words, that Leipold is arguably skipping a couple of steps by making the leap right to FBS head coach — but if anyone has ever earned that benefit of the doubt, it’s a coach who reached 100 wins faster than anyone in college football history.

“I want to be part of building a program of consistency,” Leipold says. “This program hasn’t had two straight years of over-.500 football since the early ’80s. We want to be consistent bowl participants.”

There is an inherent romanticism to coaching in Division III, because it is the last bastion of small-time college football, a place where scholarships are nonexistent, a place where coaches like Leipold wind up teaching classes and have few full-time assistants. Larry Kehres, the longtime coach at Mount Union, Whitewater’s Ohio-based rival in excellence over the past eight seasons, was offered the head-coaching job at nearby Kent State in the late 1990s, but he chose to stay and finish his career at the D-III level; in 2012, Kehres retired and his son Vince took over.

“They talked about Mount Union and Whitewater being rivals,” Leipold says, “but I looked at them as our allies because they’ve been able to take on Division III in the same way.”

Leipold never got to know Kehres very well, never got to “ask the educational questions I wanted to,” because the two programs were continually on parallel tracks toward the national championship game, but I have to imagine that Kehres — himself one of the most successful coaches in college football history at any level — will watch Leipold’s progress with interest, as will the rest of the D-III community. Because on a basic level, football is football, and the only way for Leipold to satisfy his own yearnings was to attempt to prove this truism himself. And so he began his FBS career last weekend with a 51-14 win over Albany; on Saturday, the Bulls will travel to face a Penn State team that proved itself to be eminently flawed during a season-opening loss to Temple. It will either end with Leipold’s first loss as a head coach in three years, or with arguably the most consequential victory of his career.

“Whitewater was home, and it was my alma mater, and my family was there,” Leipold says. “But at the same time, there’s a point where sometimes you could say, ‘Is it fair to our players or our staff that you’re continually evaluated on perfection?’”