Madison Bumgarner owned Royals hitters on Sunday night, firing the first complete-game shutout by a Giants pitcher in a World Series contest since 1962, pushing San Francisco to within one victory of its third title in five years with the 5-0 win and raising an intriguing question: Will we see the most dominant player on either team and one of the best playoff performers of all time again this postseason?

Bumgarner struck out eight, walked none, and allowed just four hits on Sunday, letting only one Royal advance past first base. Thanks to a combination of the expanded postseason format and Bumgarner’s own brilliance, the wild-card-winning Giants ace has now thrown 47.2 innings in these playoffs, the second-highest postseason total of all time.

All of our postseason coverage!
In those 47.2 innings, which covered six starts, Bumgarner has struck out 41 batters, walked six, allowed just 26 hits, and flashed a 1.13 ERA. If we tack on his brilliant start in Game 2 of the 2012 World Series, Bumgarner’s last seven postseason starts net this stat line: 54.2 IP, 28 H, 8 BB, 49 K, 0.99 ERA. The craziest thing about his playoff résumé might be this: In Game 1 of this year’s World Series, Bumgarner went seven innings, allowing just one run on three hits … and it was the worst of his four career World Series starts.

OK, one more nutty nugget: Bumgarner, 25, is younger than both Jose Abreu, 27, and Jacob deGrom, 26, the AL and NL favorites for this year’s rookie of the year awards.

Though he’s young, Bumgarner is already a seasoned vet, and he’s shown an increasing willingness to fire high fastballs as his career has progressed, keying his sustained success:

That’s a rare approach in today’s game, where chucking hard-to-hit knee-level or lower pitches gets rewarded with lots of strike calls. But the Royals finished last in the majors in both walks and home runs this season, making them the kind of team that would swing at those tantalizing but often too-high heaters without being able to do much damage against them.

While Bumgarner’s outings have been metronomic this October, his approach in Game 5 of the World Series differed significantly from how he attacked Royals hitters in Game 1. In the series opener, Bumgarner unleashed a barrage of high fastballs, including 17 that were high enough to be out of the strike zone: 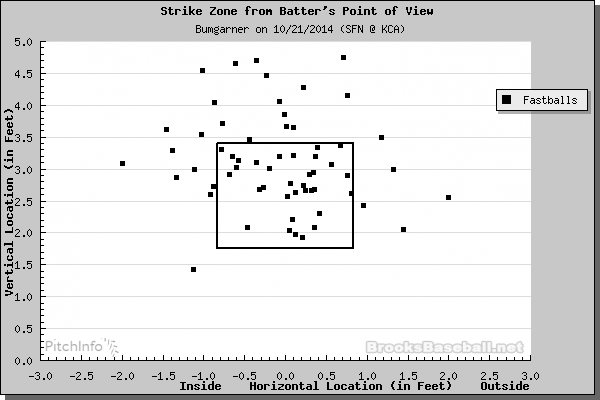 His Game 1 approach becomes even starker if we look only at his battles with right-handed hitters: 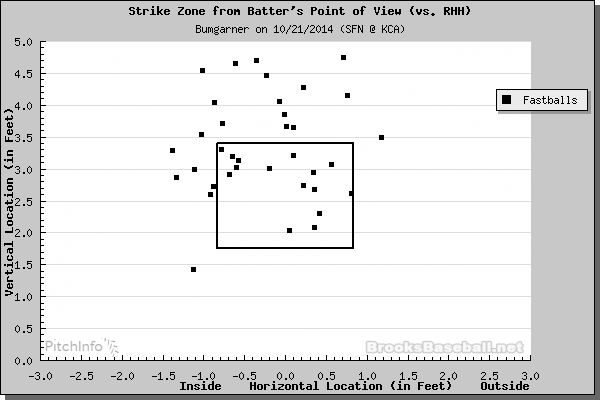 Rather than continue along that path in Game 5, though, Bumgarner showed more diversity with his fastball location. The soft-spoken lefty rarely shares specific details about his approach with the media, and Sunday night was no different. But Bumgarner’s heater location looked like the product of a pitcher who was trying to switch up his game plan so that the opposition couldn’t scout his tendencies and figure him out: 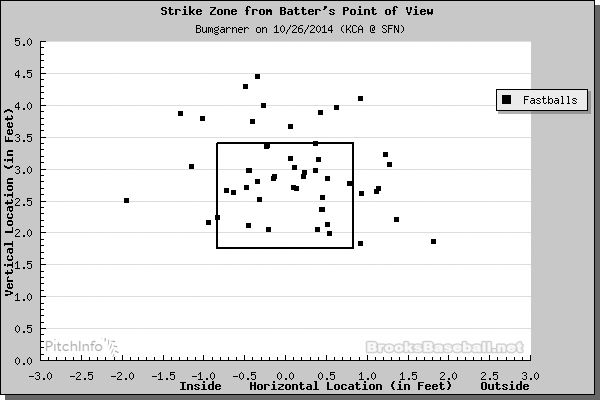 Of course, in a 5-0 game, the starting pitcher can’t take all the credit. The Giants outplayed the Royals in multiple ways Sunday night, which could spell trouble for K.C. if the two teams’ non-pitching performances repeat when the series resumes Tuesday at Kauffman Stadium.

Surprisingly, that additional edge starts with defense. One of the Royals’ biggest advantages in this series was supposed to be their glove work. Going beyond traditional metrics and focusing on stats that measure how well a team converts balls in play into outs, K.C. ranked fourth in the majors in Defensive Runs Saved during the regular season and first in Ultimate Zone Rating, according to FanGraphs. The Giants, meanwhile, tied for 16th and 15th, respectively, in those metrics.

In Game 5, however, the Giants beat the Royals at their own game, finding holes with grounders, bloopers, and even a bunt, while K.C. failed to match that success. In the bottom of the second, Brandon Belt followed Hunter Pence’s leadoff single with a gorgeous bunt hit (the first of his major league career) that scooted fast enough to elude James Shields up the third-base line, but still rolled slowly enough to usher Belt to first safely. The next batter, Travis Ishikawa, hit a fly ball to center, fairly deep but still well short of the warning track. With nobody out, Pence was going to run to third regardless.

The bigger surprise was Belt, who tracked the flight of the ball, tagged up, and then advanced to second. Center fielder Jarrod Dyson caught the ball and threw toward second, but his throw was off line by a mile. Brandon Crawford then followed with a sharp grounder to second, which might’ve (1) resulted in an inning-ending double play had Dyson made a throw that kept Belt from advancing, or (2) set up a play at home had Dyson thrown out Belt at second, thus allowing Ned Yost to pull his infield in with just one runner in scoring position and one out. Instead, Dyson’s bad throw, combined with Belt’s two excellent plays, gave the Giants a 1-0 lead, an uncommon instance of the Royals’ usually sterling defense failing them.

In the bottom of the fourth, another Dyson miscue turned the possibility of a Giants run into an actual run. With two outs and runners on first and second, Shields worked the count to 2-2 against Crawford. Shields then threw one of his patented knuckle curves, low and out of the strike zone. With Bumgarner on deck, Crawford expanded his strike zone, reaching out and blooping a pitch to center. On a similar ball in Game 4, Dyson made one of the most amazing catches you’ll ever see, pulling off a diving grab that was nearly impossible to believe despite all the numbers designed to help us. This time, Dyson opted not to dive and compounded the lack of a catch by taking a short hop off the chest, turning a possible run scored by the less-than-blazing Pablo Sandoval into an easy trot home. Given Nori Aoki’s big offensive edge over Dyson against left-handed pitchers, watching Dyson make those defensive blunders had to feel like the ultimate letdown for K.C. fans who’d grown used to seeing the ultimate outfield in action.

Though the Royals were otherwise sharp on defense — Lorenzo Cain’s running catch to end the fifth, a thing of beauty, saved two runs — the Giants still fared better with the leather. In the top of that fourth inning, Sandoval made a very difficult play look easy. A sharply hit grounder struck the seam between the grass and dirt wide of third, causing the ball to skip low rather than take a true hop; Sandoval gloved it cleanly and made the play with no fuss. Belt closed out the inning by stabbing another hard grounder, then sprinting toward — and sliding into — first, beating Salvador Perez by a hair.

That play marked just the latest bit of fancy glove work for Belt, an excellent all-around player who’s underrated by traditional metrics, since he doesn’t fit the prototype of the big, power-hitting first baseman (in part because he plays half his games in the worst park in baseball for dingers). In Game 4, Belt closed out the top of the second by fielding a ball well wide of first and throwing perfectly to second for an inning-ending groundout — the kind of play many bulky first-base sluggers would struggle to manage, but one that Belt made look easy. In the sixth inning of that same game, he made one of the biggest defensive plays of the World Series, starting a 3-6-3 double play with a perfect throw to second, erasing Dyson from the basepaths, preserving a 4-4 tie, securing a third scoreless inning of relief for Grantland’s favorite son Yusmeiro Petit, and setting the stage for an eventual series-tying 11-4 Giants win.

Indeed, despite the Royals’ defensive upper hand during the regular season, the Giants have been just as good during the playoffs, and in some ways better. According to ESPN Stats & Info, the Royals and Giants have allowed 52 and 47 percent of hard-hit balls to fall for hits this postseason, respectively, stingy numbers compared with the major league average of 63 percent during the regular season. The Royals, however, have allowed a .250 batting average on balls in play on soft-hit balls this postseason, 103 points higher than their regular-season mark. Compare that with the Giants, who’ve allowed a .139 BABIP on balls classified as softly hit this postseason after posting an MLB-best .127 BABIP on those balls during the regular season. The Royals have allowed a BABIP of .429 against bloopers (soft-hit liners and short fly balls) in the World Series, compared with just .235 for the Giants.

Of course, many of those stats are descriptive rather than predictive. The Giants have had superior luck as well as superior play on their side en route to a 3-2 series lead and 15 unanswered runs, but the Royals may yet reclaim their defensive advantage in Game 6 and, if the series goes that long, Game 7.

Beyond the gloves, Yost’s decision-making will bear watching (doesn’t it always?). The Royals skipper has decided he’s going to sink or swim with run prevention this October, and it’s obviously worked great for the most part, since K.C. is 10-3 this postseason. But in the last few days, we’ve seen glimpses of how that strategy can backfire. The biggest head-scratcher — other than starting Dyson over Aoki — came in the fifth inning of Game 5, with the Royals trailing 2-0. After Omar Infante doubled with one out, the Royals had Dyson and Shields due up to bat against Bumgarner. Yost chose not to pinch hit for either batter, despite carrying a stacked bench that included dangerous right-handed hitters Billy Butler and Josh Willingham. Bumgarner fanned both Dyson and Shields, and the Royals never got another runner into scoring position. The Giants boasted a significant offensive advantage entering the series, and if Yost is going to negate the tactical improvements he’s made in bullpen usage and other areas by refusing to take steps to improve his lineup, the Royals could be in trouble.

The good news is that they won’t see Bumgarner start another game. The big lefty has turned in a playoff performance that rivals Orel Hershiser in 1988, John Smoltz in 1996, Randy Johnson and Curt Schilling in 2001, Josh Beckett in 2003, Chris Carpenter in 2011, some of Jack Morris’s best efforts, and even peak Sandy Koufax. Asked after Game 5 if the 117 pitches (including 10 in the ninth inning, with the game well in hand) he threw would affect how much he could pitch in relief if the series goes to a Game 7, Bumgarner said he never thinks about pitch counts. Game 7 would occur on Wednesday night if it happens, which would be Bumgarner’s between-starts throw day, and would thus set up a realistic scenario in which he could go a couple of innings if needed. Manager Bruce Bochy has been stubbornly loyal to his starting pitchers in October, which means the unhittable Petit (12 innings, 13 strikeouts, four hits, no runs this postseason) likely won’t get the call to start in Game 6 or 7, but should be available for plenty of usage out of the pen if needed.

No non-Bumgarner Giants starter has gone more than 5.2 innings in this World Series, nor allowed fewer than three runs. Along with Jeremy Affeldt and Santiago Casilla, Bumgarner and Petit will add two excellent relief options, thus making the battle of the bullpens look much more even against the Royals’ big three of Kelvin Herrera, Wade Davis, and Greg Holland. Though it’s still anyone’s series to win, it would be fitting if the man who’s making history this October gets another chance to shine before it’s all over.

This article has been updated to provide more current BABIP figures for both teams on soft-hit balls during the postseason.