Last night, Film Independent hosted a screening of Gone Girl at the Theatre at Ace Hotel in downtown Los Angeles, followed by a Q&A session with David Fincher led by Elvis Mitchell. Fincher and Mitchell took the stage for nearly an hour, diving deep into Fincher’s influences, his feelings about his movies, and his propensity for saying “dude” when he gets excited.

David Fincher Is Very Funny: Fincher mentioned The King of Comedy as a major influence on his work, and the influence of Scorsese’s pitch-black ’80s comedy about notoriety and narcissism can be seen all over Gone Girl, a pitch-black comedy about notoriety and narcissism. Fincher brought up the sequence in The King of Comedy when delusional aspiring comedian Rupert Pupkin, played by Robert De Niro, brings his girlfriend to the Jerry Lewis character’s house uninvited. Fincher talked about how much he loves the combination of fear and uncomfortable laughter evoked by Pupkin’s surprise drop-in. Is Amy kind of a Rupert Pupkin? She just might be. He said, “I want to see arguments between characters where I agree with both of them.”

He clowned Mitchell a few times, once for Mitchell name-dropping his “friend” Denzel Washington. Fincher also said the word “dude” a few times in a very natural way, as in “come on dude, I was just teasing,” proving that he is a native Californian. He likes Gone Girl because it shares his perverse sense of humor; “It’s funny because it’s horrifying.” He thought Fight Club was “the funniest thing I’ve ever read,” and he cited the subversive humor as his main reason for making it. Asked what he thought was funny in Gone Girl, he said, “I love seeing her planning out to take her own life. I think that’s hilarious.” It is pretty hilarious, particularly the obsessive quality of the Post-it notes, which seem like they would appeal to a known task-oriented obsessive like David Fincher.

David Fincher Is Not As Obsessive As You Might Think: Fincher downplayed his famously rigorous shooting style, describing it as merely an attempt to get as much material each day as possible, as it will all be whittled down into a paltry amount of usable stuff. He talked about an early moment in the movie when Amy gifts Nick the board game Mastermind, and how he has been asked about it by critics repeatedly but insists that it was completely unpurposeful, meant neither as a clue nor a red herring. He said it was literally chosen because they were able to get the rights to use it. But then later on, he called Amy a “criminal mastermind,” so maybe subconsciously all of his creative decisions are purposeful, even the accidental ones. He described the process of making a movie as trying to get back to what excited you initially about the project, even as it goes from a big idea to a concrete number of usable takes.

David Fincher Admires Tyler Perry’s Work Ethic: Who makes David Fincher feel unaccomplished and lazy? Tyler Perry! Fincher complimented Perry’s ability to work nonstop, after explaining that they met when Fincher was scouting Atlanta soundstages to shoot The Curious Case of Benjamin Button. He said Perry is “lovely” and “so nice” and that they got him for a small window right after he wrapped shooting two complete seasons of his TV shows. Fincher said Perry was a consummate professional: “I was like, ‘Wow, dude, I don’t know how you turn that on.’” He also describes going to Perry’s house to court him for Gone Girl, and being told to wait as he saw Perry on the third floor of his house flying a model airplane. He says he enjoyed being made to wait for Perry to finish flying the model airplane, because it seemed like something Tanner Bolt, his Gone Girl lawyer character, would do.

David Fincher Hates Neat Endings: Asked to list “perfect” movies, he named Chinatown, and he sure loves a Chinatown ending. He says the studio wanted a “Fatal Attraction ending” for Se7en, where the detectives confront John Doe just as he is murdering Gwyneth Paltrow’s character. Fincher recalled his attempt to convince the studio that his way was much better: “No, it’s better that she dies! She’s been dead for fourteen hours! She dies offscreen, horribly.” He says he loves a Hollywood ending sometimes, but feels that usually when the good guy gets the bad guy and saves the day at the end “it’s not that satisfying, is it?” 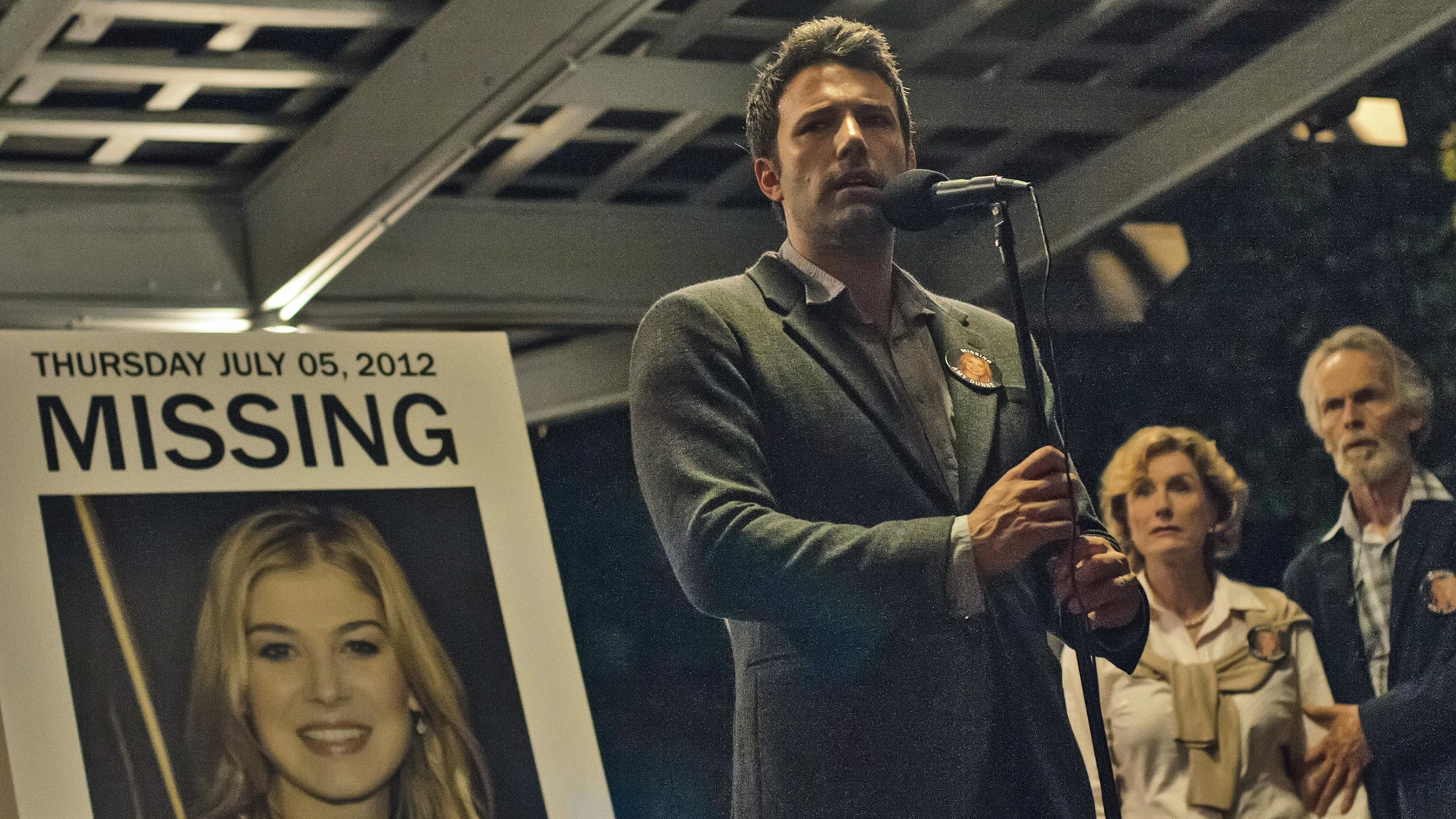 David Fincher Thinks Neil Patrick Harris Has a Clare Quilty Quality: Fincher cited the Lolita secondary antagonist, played with creepish delight by Peter Sellers in the Kubrick version, as the inspiration for NPH’s unsettlingly erudite rich weirdo. He called NPH’s Gone Girl character, Desi, “Clare Quilty by way of Sting.” He got the idea to cast Harris after accidentally seeing a few minutes of the NPH-hosted Tonys and thinking, Wow, this guy can make me watch the Tonys! He complimented NPH’s “quicksilver energy” and how he enjoys that Desi “has none of the same concerns that the rest of the cast have” in the movie.

David Fincher Likes to Experiment: He said what drew him to Gone Girl when he read it was that it’s “a mystery and then becomes an absurdist thriller and then a satire” and he liked the way it shifted genres repeatedly throughout. He also liked what it had to say about marriage and relationships, in a very “hyperbolic” way.

David Fincher Can’t Watch His Own Movies: He hasn’t seen Fight Club in nine years. He says encountering his movies while flipping around television is like looking at your high school graduation pictures. He says he is unable to watch his own movies without thinking about what cuts he would make. When asked if he is still mentally cutting Gone Girl, he said yes, absolutely. He recalls watching it at the New York Film Festival and agonizing over how long the scenes felt, obsessing over what he’d trim for a next cut, like a shot of Ben Affleck’s Nick Dunne driving up to his house. “We don’t need this. He doesn’t have to drive to his house. Who cares if he drives to his house?” He said watching the movie with the audience at NYFF made him feel like he was going to “throw up,” so he left after the first hour: “I was never more aware of how long the scenes were than during the New York Film Festival.” He said his sudden reaction to his own dialogue-heavy movie was “somebody please shut these fucking people up,” and compared the process of screening at film festivals to “having a cesarean in front of seven hundred people.”

David Fincher Loves Bob Fosse: Fincher has seen All That Jazz at least 200 times, and says “Star 80 is amazing.” He thinks Fosse is “ruthless about his characters,” who are “amazing and funny and watchable and disgusting.” This explains a lot about how Fincher was able to shoot such great dance sequences for music videos like Madonna’s “Vogue.” Next up for Fincher: a musical?