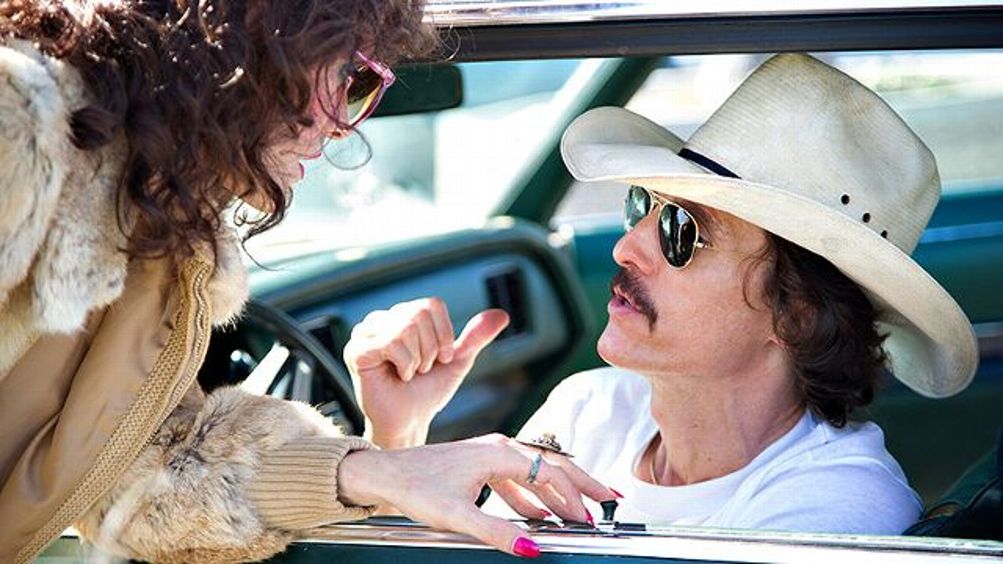 In 1985, an HIV diagnosis was tantamount to a death sentence, as the virus was still poorly understood and treatment options were in their infancy. Other options did exist, though … if you could hustle.

Dallas Buyers Club is based on the true story of Ron Woodroof, who responded to his own AIDS diagnosis (and prognosis of just 30 days) by seeking out alternative treatment — namely, experimental drugs obtained from a doctor in Mexico. When they turned out to be more effective than AZT, at the time the only drug being prescribed in the U.S., Woodroof went into business importing the ddC and peptide T and distributing them to AIDS patients in Dallas.

Wesley Morris: “To give Ron’s homophobia a swishy surface to bounce off of, the writers concoct a sassy transgender junkie who’s called Rayon and is played by Jared Leto with relish … and ketchup, mustard, and sauerkraut. We could be watching an important Hollywood movie. We could also be watching a rerun of Night Court.”

Domhnall Gleeson is Tim, our protagonist, and Rachel McAdams is Mary, his intended. Mary thinks they’re having a normal relationship where they stand on more or less equal footing, because she has no idea that Tim, like all the men in his family, has the ability to go back in time to any specific moment just by thinking about it. While it’s cute, at first, to see him giving himself do-overs when he screws up a moment in their courtship, the fact that there’s basically no action he can’t undo means the movie kind of has no stakes. But the leads are cute, so if you’re watching while checking Olympic updates on Twitter or whatever, you might not mind the dullness of the story.

Wesley Morris: “This movie combines Curtis’s love of science fiction with his loves of slapstick (he’s written for Dr. Who and Rowan Atkinson) and actual love. The combination isn’t lethal. It’s Groundhog Day without the certitude.”

The Expendables franchise having paved the way for geriatric action films, we probably all could have expected that Sylvester Stallone and Arnold Schwarzenegger would find a way to co-headline another film. And here it is.

In Escape Plan, Stallone plays Ray Breslin, a former prosecutor (!) who now makes his living testing the inviolability of maximum-security prisons by living in them and trying to break out of them. But then his great plan of faking an identity as a criminal and getting sent to prison goes awry — I know, who could have guessed? — and he has to join forces with a fellow inmate (Schwarzenegger) to break out for real. This can’t possibly be good, but I will definitely watch it.

It can be a slightly dicey proposition to build a kids’ movie around the idea that animals don’t necessarily want to do what humans want them to, but if the aquarium industry can weather Finding Nemo, turkeys can probably bounce back from Free Birds.

Owen Wilson voices turkey revolutionary Reggie, trying to raise awareness among his fellow birds that Thanksgiving is an existential threat. And while it may be weird to watch a Thanksgiving-themed movie in February, Woody Harrelson also provides his voice talents, so you can always just think of it as a brand extension for True Detective.

Country music may be a quintessentially American genre, but this Belgian romance dramatizes the reach it can have to affect fans oceans away. An Academy Award nominee for Best Foreign Language Film, The Broken Circle Breakdown tells the story of tattoo artist Elise, bluegrass banjo player Didier, and their love affair over seven eventful years of bonding over a shared love of bluegrass music and American culture.

Metallica Through the Never

Metallica has already done a straight concert film and a documentary about its process, so maybe creative restlessness has led it to make this hybrid concert/narrative affair.

Metallica Through the Never is organized around the story of stagehand Trip (Chronicle’s Dane DeHaan). Charged with driving a jerrican of gas to a stalled truck belonging to the band’s entourage, the chaos he finds in the aftermath of some kind of disaster is intercut with Metallica performances. It’s available in 3-D (if you have a 3-D TV and its accoutrements), so it’ll be like Lars Ulrich is coming right at you. Maybe that’s a selling point and maybe it isn’t.