There’s no romance behind AMC’s decision to get into the scripted business a few years ago. In fact, it was a move that would have suited both Don Draper’s callow capitalism and Walter White’s grim, scientific precision. The network wasn’t interested in changing the world or shaking up the medium. What it wanted was hours of controllable, proprietary content that would complement its spotty library of classic films. That’s why all of AMC’s offerings can be easily slotted into the broadest genres: The Walking Dead is horror, Rubicon was ’70s conspiracy, Hell on Wheels is a Western. When he green-lit Breaking Bad, network boss Charlie Collier imagined it fitting in nicely as a bookend to various indie dramas from the ’90s. I’m not saying he didn’t know Mad Men was great the moment he saw it. I’m saying greatness wasn’t necessarily the goal.

Breaking Bad and Mad Men wildly outperformed AMC’s modest scheduling expectations, of course, thanks mainly to the uncompromising — and, thus, expensive — vision of their respective creators. (It goes without saying that The Walking Dead has outperformed nearly everything else on television — at least in terms of ratings and profits.) But, rightly or wrongly, AMC clearly viewed the critical and artistic success of its flagship shows as an outlier. It’s a lot easier to control a concept than a creator — and The Walking Dead’s three showrunners in four years is testament to that. And so the network has instead renewed its commitment to finding and funding highly specific visions, not the mercurial visionaries that often come with them. The results have been uninspired, as business and art: The Killing was a crime show that couldn’t quite solve the central mystery of its own soggy existence and Low Winter Sun was a flimsy antihero exercise cobbled together with fake blood and borrowed bluster. Plodding and uninspired, these shows felt like obligations more than anything else, dispiriting evidence of what happens when a network prioritizes showing worlds rather than telling stories.

Turn, which debuted a few weeks ago, initially struck me as more of the same. Loosely based on Alexander Rose’s 2007 nonfiction book Washington’s Spies, the show is set in the rough early days of the Revolutionary War. The British aren’t just coming — they’re winning: occupying New York City, hunting down colonists like rats, and generally flouncing around the continent like debauched extras in Tom Jones. Showrunner Craig Silverstein, late of The CW’s Nikita, centers his adaptation on Abraham Woodhull (Jamie Bell), a humble Long Island cabbage farmer who would rather tend to his crop and baby son than choose sides. But by the end of the busy pilot, Abraham has become America’s first double agent, pledging fealty to the redcoats who have taken control of his hometown while funneling intel to his scruffy former schoolmates waging war on the other side of the Sound. Think of it as The Americans: First Class — AMC’s overzealous marketing team certainly does. Jiggered with equal parts history and intrigue, it’s the perfect show to slide between airings of The Patriot and Patriot Games.

And yet Turn isn’t just programming spackle. I found myself enjoying the show much more than I had expected, given its questionable pedigree and the frosty reception it had received from most quarters. Though I’ve been plenty dubious of AMC’s overreliance on period — its next two offerings, Halt and Catch Fire and Knifeman,  explore early ’80s Texas and 18th century London, respectively — this particular period doesn’t feel like a death sentence. Perhaps that’s because it’s both relatively unexplored (on television, at least) and hits close to home. Shot with well-composed austerity on location in Virginia, Turn’s vision of 1776 is both unfamiliar and immersive. As shocking as it is to see Long Island depicted as a mellow, agrarian community, it’s even more shocking to see the East Coast of the United States as occupied territory. (Of course, neither is as shocking as hearing New Jersey referred to as an exotic locale.) 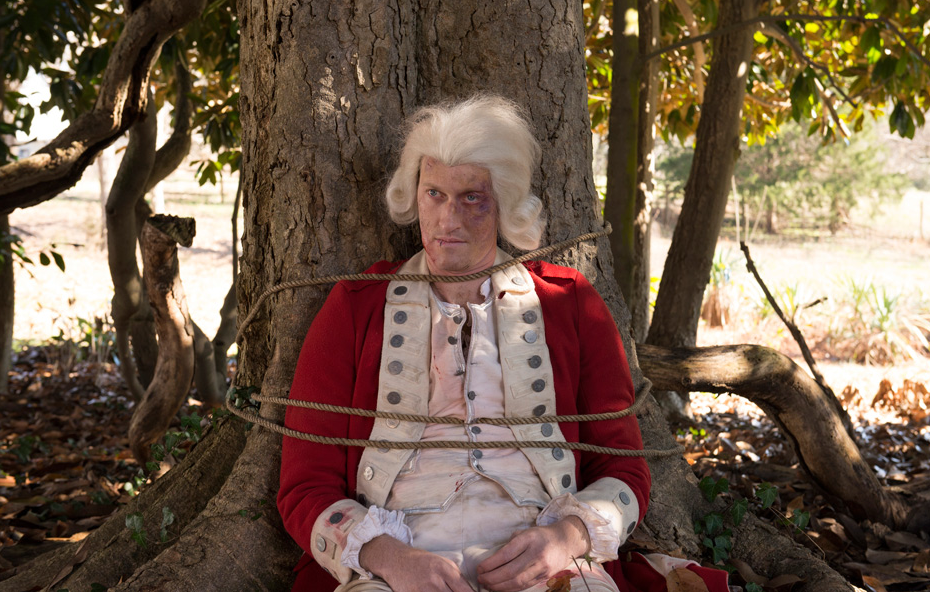 This isn’t an America we’ve seen before: divided, ravaged, scared. In Abe’s hometown of Setauket, browbeaten colonial barmaids serve redcoat officers cheap rum in pewter mugs; when those officers fall in combat — which, at the start of the series, isn’t often — they’re shipped home stuffed into recycled liquor barrels. With a visual palate established by pilot director Rupert Wyatt (Rise of the Planet of the Apes), the show is lit like a Trumbull painting. The drab beiges and grays of the colonial landscape contrast eerily with the sharp blues of the Yankee troops and the bloody vermilion of the British. It’s a look as rough and ambitious as the young country it seeks to depict.

Bell, soon to be instigating clobbering time in the new Fantastic Four movie, makes for a suitably earnest lead. The vivacious Heather Lind (as Abe’s lost love turned coconspirator), the wonderfully prissy Burn Gorman (as the very model of a pre-modern major general), and especially the sneering Samuel Roukin (as the villainous Captain Simcoe — a real figure transformed into something fantastically broad; imagine Mad Men’s Lane training at Cobra Kai) all delight in their roles, acting each scene in great, lusty swigs. Also strong are elder statesman Kevin R. McNally, as Abe’s royalist father, and Angus Macfadyen as a vicious manhunter. But the rest of their colleagues appear to be acting in entirely different shows. As the colonial soldier Benjamin Tallmadge, the stiff Seth Numrich makes one think of George Washington’s teeth; as Abe’s friend turned smuggler Caleb Brewster, Daniel Henshall has a high old time but, with his contemporary swagger and anachronistic English — “you knows” fall from the scripts like musket balls — that time in no way suggests the late 18th century.

It’s a disunity that carries over into the storytelling as well. Turn strikes me as a show that would be better served by a preindustrial pace: Its detours away from the plot and into the world surrounding it — such as Abe’s trip with his father onto “New York Island” to negotiate pork futures — are often the most rewarding parts; the tiniest details (the rose pins to signify loyalty to the crown; the continental currency as useless as toilet paper) more compelling than the broadest characters. Spread across three states and two armies, Turn has so many gears to grind just to get things moving that whole swaths of society are unjustly ignored. Abe’s wife, played by Meegan Warner, is little more than that. Occasionally we catch glimpses of Native Americans or the slaves tilling Abe’s cabbage fields, but they’re scenery, no different than the clapboard farmhouses that dot the terrain.

Colonial America in the throes of war feels like a rich enough canvas for a series; laying spy ciphers and love triangles atop it feels both exhausting and unnecessary. There’s so much to see out in the open. Why the focus on the shadows?

I wonder if this is the sort of tangle that could have been eased by the guidance of a more developmentally savvy network. Or perhaps Turn is just doomed by the same obsession with grabby serialization that created it. In today’s hyperactive cable marketplace, one sizzling hook is no longer enough to make it on the air; in the immortal words of Jack Donaghy, everything now requires that “third heat.” Yet I dearly wish someone would check the wattage. At this point, the typical 13-episode cable season — with its overstuffed premiere, odorous red herrings, bloody penultimate episode, and bridge-building finale — has become as predictable as the 22-episode network grind it sought to replace. Turn takes a lot of interesting ideas and some very good performances and wedges them into a vehicle that ultimately neither suits nor flatters it. I wonder what sort of show Turn could be on a different network or in a different time, when Silverstein could build up original characters and chase down historical rabbit holes at his leisure. It’s OK now, but I bet it would be better. Despite its subject matter, Turn doesn’t need to be revolutionary. It just needs to be free.