Season 1 of The Walking Dead, Telltale Games’ multiplatform episodic adaptation of Robert Kirkman’s endlessly recyclable series, ended with an emotional mic drop. After 10-plus hours of playtime, the five-part 2012 title culminated in a devastating, role-reversing scene between the two central characters around whom its universe revolved: Lee, the decisive, responsible adult, and Clementine, the cute, dependent kid. While the final scenario wasn’t surprising — the difficult choice it asked the player to make, or one like it, loomed on the horizon throughout the first four episodes — it was so well executed, and so well set up, that two years later I’m still scared to spoil it.1

After a particularly memorable mic drop, of course, an artist has every incentive to tiptoe back onto the stage to retrieve the mic after the spectators disperse. Hooked after one high, the audience demands even more mic-dropping moments and is let down by anything less. That’s the challenge Telltale faced in Season 2 of the series, which concluded last week with its fifth installment, perhaps pointedly titled “No Going Back.”

Storytellers and spectators are so fond of postapocalyptic settings because they imbue otherwise mundane dilemmas and decisions with built-in import and emotional resonance. (In both the television and “good” video-game versions of The Walking Dead,2 for instance, a trip to the supermarket becomes a set piece instead of a routine task.) Season 1 intensified its setting’s already elevated stakes by putting the player in charge of an adorable NPC’s safety. It’s an effective formula, employed in the past by Ico and other classics, that activates twice as many instincts: survival and parental.

There’s also a “bad” video-game version with more tie-ins to the show.

At the end of Season 1, though, Telltale took a risk, transferring control, both figuratively and literally, from Lee to Clementine and stripping away the source of that protective impulse (until restoring it, in an even more manipulative and transparent form, when a baby enters the picture in Season 2’s penultimate episode). As the lone carryover member of the main cast early in Season 2, and one of only two Season 1 staples to appear in anything close to the complete arc, Clementine carries a heavy narrative load, serving as the constant in a world where other characters come and go (often as a result of being disemboweled). While it strains credulity that an 11-year-old gets to go on every expedition and overhear every exchange, our preinstalled affection for Clementine makes the narrative hurdles the game has to clear to keep her in the foreground relatively easy to overlook.

Less easy to excuse is the same sense of fatigue and futility that made the TV series stagnate between the destruction of the CDC in the Season 1 finale and the introduction of Abraham and Eugene in Season 4. The AMC show’s emphasis is on day-to-day survival, with little screen time spared for the larger world, let alone the pursuit of a cure for the plague that plunged it into anarchy. Telltale’s Season 2 follows the same formula: Every ally is about to betray you, every friendly dog is about to bite, and every stronghold is either secretly sinister or less secure than it seems.

Sure, maybe this is the way a zombie-infested world would work, but the TV representation gets tiresome because the writing is only sporadically strong enough to balance out the bleakness. In Season 1 of Telltale’s interpretation, it always was. Season 2’s plot and pacing are more uneven — perhaps not surprisingly so, in light of the absence of Season 1 lead writer Sean Vanaman and co–project leader Jake Rodkin, who left Telltale to start their own studio. 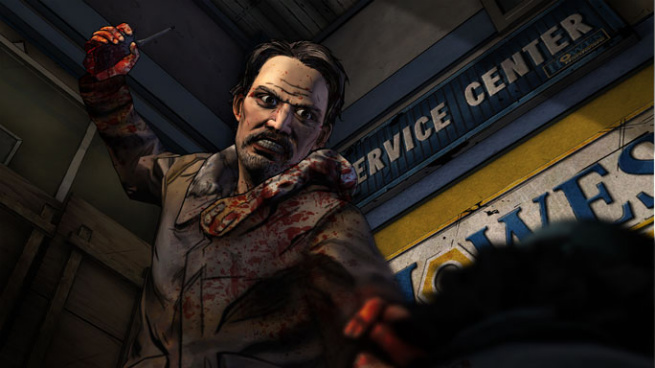 Season 2 introduces a Big Bad called Carver (voiced by Michael Madsen), a more convincing version of David Morrissey’s melodramatic Governor (as seen on TV). Carver is a compelling character, but his story doesn’t span the whole season, and the other new traveling partners who pick up the slack are mostly forgettable zombie-bait. If you save them from one bloody death, it’s only so they can shuffle around until meeting another, equally grisly end. The other primary (and somewhat heavy-handed) plotline focuses on the increasingly erratic and violent behavior of a character who’s cracking under the strain of splattering skulls and losing loved ones, posing a potential threat to the group. (Sound familiar?) Because this isn’t a problem Clementine can solve, I found myself repeatedly selecting whatever dialogue option would exhort the adults to stop fighting, usually to little effect.

While The Walking Dead’s point-and-press-button gameplay was never about the kinetic joy of controlling an avatar, portions of Season 2 make it feel more like an occasionally interactive movie than ever before. Gone are Season 1’s simple puzzles, which provided opportunities to interact with the environment and the NPCs. When the game does give you control of Clementine in an open area, it’s usually your cue to point her toward a distant destination and push forward on the joystick for a few seconds, at which point the next cutscene kicks in.

That isn’t necessarily a negative, but the lack of interactivity, along with the graphical stutters and long loading times that continue to detract from the flow, place additional emphasis on the player’s ability to influence the story, which has been a double-edged sword for the franchise from the start. If the game has a hook aside from its licensed IP, it’s the idea that “choice matters” and that “your decisions change the story around you” (as the back of the box says). While the former is usually accurate, in that certain choices come at an emotional cost to the player, the latter is generally true only in a superficial sense. Two different responses to the same situation often produce different dialogue options or cinematics but the same result, which is likely unavoidable, from a development perspective. If the flap of a butterfly’s wings can alter events in our world, imagine what saving or killing a prominent character could do in the game’s.3 To truly make good on the box’s implied promise, Telltale would have to develop a different ending from each branching decision point, an almost impossible task.

Especially since The Walking Dead imports your decisions from the previous season’s from old save files. 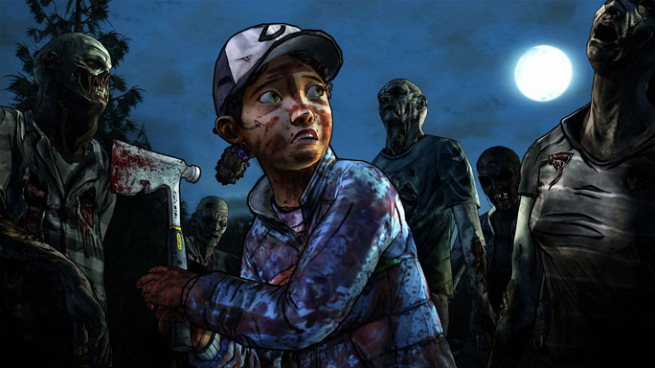 Nonetheless, it didn’t sit well with some players that the end of Season 1 was close to a one-size-fits-all experience, even though its shared nature made it easier for the climactic scene to leave an impression on the community’s collective memory. While Telltale presented the player with a choice during the denouement, it was a binary one between two equally efficient deaths, neither much more poignant than the other. For all the illusion of lasting consequence produced by decisions earlier in the game, every player faced the same final selections and saw the same closing cutscene.

This was the most common complaint about the critically acclaimed first season, as well as the “400 Days” DLC and the early episodes of the second. In “No Going Back,” Telltale addresses the critique and gives players what they thought they wanted: multiple endings. To pull it off, though, Telltale takes a shortcut. It’s not the accumulated weight of choices made throughout the game that influence the endgame, but a few momentous ones packed into the period just before the credits roll. Based on those decisions, the story plays out in one of five different ways.

Unfortunately, the flexibility backfires, because only one of the endings is fulfilling — and not just in relation to Season 1’s lofty standard. According to the game’s stats, only one in six players chooses wisely and unwittingly elects the outcome that touchingly redeems a troubled character and leaves Clementine in a demonstrably different condition from when the episode started. I, along with a plurality of players, got an ending I felt the game had been pushing me toward, but which left me feeling empty and detached. Even more so than in most cases, your mileage may vary.

I know other endings exist only from watching them on YouTube and reading about them on the Walking Dead wiki. Contrary to the finale’s title, one can, in fact, go back by using the game’s “rewind” option, which allows you to tour the roads not taken without an old-school hard reset. But to do so seems like a violation of the player’s connection with Clementine, as well as the belief that the player’s choices matter. The Walking Dead’s best resolution, then, is no more real to me than, say, fan fiction, or the way that I wish Lost had ended.

Roger Ebert controversially contended that games couldn’t qualify as art because they privilege player choices over authorial control. In this case, though, it’s not the ability to choose that presents a problem, but the quality of the choices. On the most basic level, The Walking Dead’s second season is a modest success and a passable bridge to the inevitable sequel: While it doesn’t last as long as Season 1, it delivers engrossing electronic entertainment at a reasonable hourly rate. In my Clementine timeline, though, choice comes at a cost.