Oh, The Walking Dead. In the words of the immortal Lou Reed, you just keep me hanging on. Following last week’s after-school special of a midseason premiere, in which Carl spewed just about every angry-teenager cliché at his dad while causing me to roll my eyes at 4,000 rpm, the insatiable ratings-devouring monster returned last night, teasing us with morsels of information regarding the characters about whom we might actually care. It’s as if the show, which still has the emotional IQ of a sullen teenager, were batting a coy eyelash and taunting: “I can draw more 18-to-49 eyeballs than the Olympics can; I’ll dole out the goodies when I damn well please.”

“Inmates” left Rick and Carl behind to OD on pudding while Michonne hallucinates about penning a guest column for Artforum, catching us up on the rest of the former prison chain gang. Through a series of vignettes, the episode let us know that anyone whose name we remember from before the midseason hiatus had indeed survived. What’s more, “Inmates” kept the ham-fisted monologues to a minimum — the characters invoked the word “hope” fewer than 10 times! I was starting to worry that the rest of the season would encompass Rick gently explaining puberty to Carl, but then Scott Gimple & Co. dropped gingerbread crumbs into their zombie-infested forest, hinting at where things might go from here. Which leaves us with plenty of questions:

Those who picked Beth at the beginning of the season might want to change their bets. Mere weeks ago, everyone’s favorite dead-inside blonde was mourning her new boyfriend’s death with fewer tears than you’d shed for a hangnail, but the “Inmates” opener found her on the run with Daryl, vehemently urging him to use his tracking skills to find the rest of the group. Daryl’s the one who came off colder than a Dairy Queen Blizzard, making a nasty swipe about how “faith” did very little to keep Hershel’s head attached to his body. Ouch. It was a little uncharacteristic for the show’s crossbow rock star, but considering the first half of Season 4 gave Norman Reedus little more to do than grit his teeth and shake the prison railings in frustration, I’ll take it! Daryl’s backcountry charisma has been woefully underutilized this season, and it was refreshing to see him follow those mysterious footprints to some railroad tracks, where a pair of freshly turned walkers were feasting on their victims. Likewise, it was a pleasant change to see Beth express an emotion other than eerie detachment, even if the sight of Daryl giving the walkers the business end of his crossbow sent her into catatonic shock, causing her to resume crumbling up her diary entries for fire fuel as that comfortably numb glaze dropped back over her eyes.

No, the current front-runner for a full-on Section 8 would have to be Carol’s erstwhile rat-slaughtering protégé, Lizzie. (We just have to assume Lizzie was the mysterious abstract rodent-gut artist from the season’s first half after seeing her knife some adorable little rabbits last night.) The episode’s second vignette found Hammer Time Tyreese leading Lizzie and her sister Mika through the forest with none other than Baby Judith under his arm. Yep, even The Walking Dead draws the line at serving up infant hors d’oeuvres — at least for now. (Of course, only Carl thought Li’l Asskicker was actually dead, and mostly because he wanted another excuse to hate his dad.) Tyreese looked like he had an ounce or two of regret about saving Judith when diaper-changing time came, and he sure ran off awfully fast to check on the “mysterious noise” he heard in the forest, leaving Lizzie and Mika alone in charge of the crying infant/walker bait. As Tyreese went to work with his vaunted hammer on the same batch of railroad zombies Daryl and Beth would later discover, Lizzie slipped into a trance, trying to stop Judith’s cries by suffocating her with a bare hand.

But rather than go where even premium cable fears to tread, the writers magically brought Carol back to save the day. 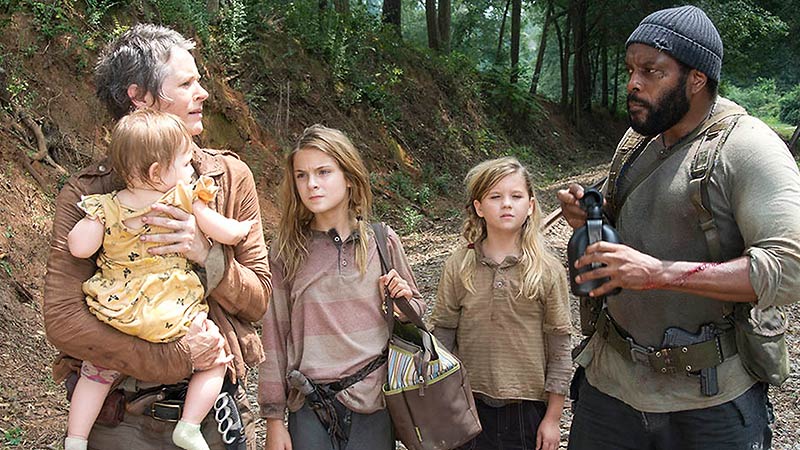 I admit, Melissa McBride was a sight for sore eyes as she escorted Lizzie, Mika, and a thankfully still-breathing Judith into the clearing where Tyreese had just finished his daily dose of hammer therapy. Even more deliciously, Tyreese greeted Carol with a big, clueless grin, and Carol was quick enough to cover up why she wasn’t at the Governor’s Ultimate Prison Smackdown. Carol could see the bits of hair and rotting flesh dripping from Tyreese’s favorite toy, and thought better of revealing that Rick had banished her from the group for preemptively flambéing Karen, Tyreese’s no. 1 OkZombie match.

With the writing staff wisely deciding to let this conflict simmer, the group came upon a sign for “Terminus,” some kind of community that seems bound to provide the next inevitably doomed sanctuary for the group. Still, I don’t know what it is, but Carol’s calming presence makes everyone around her seem smarter and less groan-inducing. Maybe it’s her dedication to surviving, and the minimum amount of breath she wastes justifying that mission. Sure, she may have tipped Lizzie toward some kind of violent anti-social disorder, but I believe that’s as much nature as nurture.

Which Lovers Will Get Their Stars Crossed Next?

After leaving Carol, Tyreese, Mika, Lizzie, and baby Judith, we picked up with Maggie, Bob, and Sasha, who were also wandering the forest. Maggie was stressing about Glenn’s whereabouts even as Sasha and Bob played post-apocalyptic When Harry Met Sally in the background. It looks like a new doomed romance is blossoming, although Glenn and Maggie seem to have a firm grip on their status as The Walking Dead’s most star-crossed lovers. Maggie was determined to find Glenn despite Sasha’s half-hearted pleas to pitch camp for the night, so the trio pressed on until it came upon the school bus of prison evacuees that Glenn had supposedly been on when it fled the Governor’s assault. In a nice, excruciating little set piece, Sasha and Bob helped Maggie clear the bus in an undead melee so that Maggie could check to see if Glenn was among the corpses sliding off her knife.

Of course, he wasn’t. No, Glenn was conveniently passed out on a concrete ledge back at the prison, safely sleeping off the last gasps of his nearly fatal fever while walkers snapped hungrily at him from below. Shaking off his near-fatal illness, Glenn retreated to the abandoned prison, ready to give up hope. Then a photo of Maggie reawakened Glenn’s Season 1 scavenging instincts. Gathering baby food, riot wear, and some weaponry, Glenn blazed through the scrum of zombies in the prison yard. He was all but home free when he came upon Tara, the Governor’s flame’s sister, moping in a little cage. 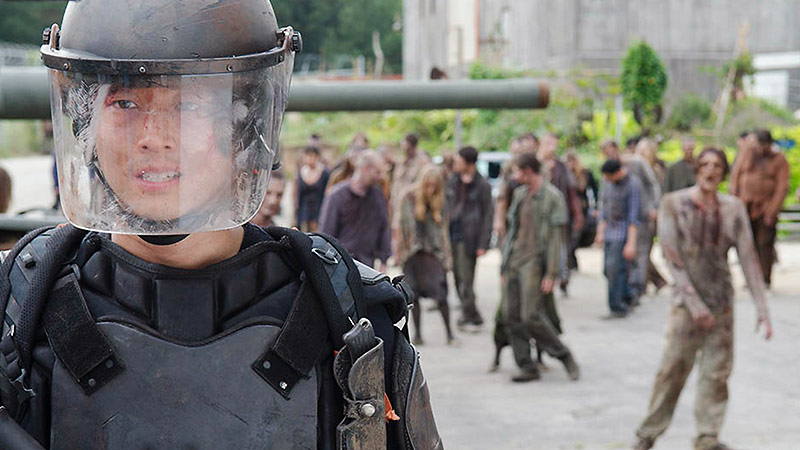 Glenn, being the one unapologetically heroic character on the show, couldn’t just leave her there to die, even though she’d been part of the army that had carpet bombed the last scrap of happiness he’d managed to tear from post-zombie Georgia. No, Glenn forced Tara to help him search for Maggie, claiming the partnership was purely out of necessity (Glenn’s so cute when he plays morally ambiguous). To her credit, Tara was apologetic and remorseful, especially after she let slip that the Governor had executed Hershel samurai style. Thankfully, just before this could elicit a soliloquy from Glenn about finding Maggie and keeping faith in a hopeless world, zombies attacked! Glenn still hadn’t fully recuperated, so he washed out pretty fast, but Tara started her long walk down the path to redemption and saved him — just as three mysterious figures arrived in an Army jeep.

Well, not mysterious to fans of the graphic novels. The episode closed with a teasing shot of Abraham Ford and his cohorts Dr. Eugene Porter and Rosita Espinosa. I confess I never got far enough in the series to know the full implications of this. But you could tell just from the dramatic Charlie’s Angels pose (lifted straight from the cover of their intro issue) that these three are important — i.e., that they won’t get eaten for at least four episodes.

After cruelly toying with my patience last week, The Walking Dead pulled itself together enough to tantalize me into believing that the old girl may have some new zombie-feeding tricks left up her sleeve.

My seesaw reaction between last week and this week made me wonder: Am I hate-watching this show now? If I am, should I be? What does it even mean to hate-watch a show with Nielsen domination this all-encompassing? How much joy can one really get from begrudging something its tsunami-like pop culture success?

While hate-watching can be fun in the short term, I think in the long term it’s likely to cause an ulcer. So here’s my new attitude toward The Walking Dead: I’m hope-and-cringe-watching. I hope any given episode will be fun in some bizarre way, even if it is preposterous, and I cringe whenever the show takes itself too seriously.

The Walking Dead will never be Breaking Bad, but it doesn’t have to be. To me, it’s an almost perfect perpetual motion machine for constructing mindless, escapist entertainment: There’s an endlessly revolving cast for whom to root, loathe, or shudder. (And even when they’re given too much gristle on which to chew, the actors are all well above Xena: Warrior Princess rerun level.) At its best, The Walking Dead can keep me hooked even when it makes me moan — but when it tries too hard to be Zombie Hamlet, my eyes glaze over like Beth’s.

This week’s body count was exponentially higher — and the carnage infinitely less emo — than last week’s Adventures of Pudding-Head Carl hour. Whose bloodthirsty heart cockles could fail to glow at the sight of Tyreese with a hammer and crazy eyes, or of an 8-year-old girl firing wildly at a zombie? To say nothing of Daryl and his ever reliable crossbow-arrow-to-the-head! Even Glenn’s first-person POV bum rush of the zombie hordes at the prison sent a little shiver up the back.

But by a mile, this week’s award goes to Maggie, for her emotional, professional, and poetically ape-shit rampage on the busload of zombified prison refugees. This slaughter simply hit highs the show has failed to reach lately. There was no walking backward piffle for Maggie, no sirree. She reached full-on emotional blackout before firing her rage boosters and painting the side of the bus with a random walker head. It was a prime cut of corpse filet.