Certain things in superhero comics are done specifically so they can later be undone. Death is one; new characters taking over older characters’ alter egos is another. Often these twists go hand in hand. Heroes die heroically, someone else picks up the cape/cowl/hammer, and the book in which it happens gets a theoretical sales bump and a credulous/patronizing mainstream-press write-up or two. But this is only half the story; in most cases the story isn’t really finished until the original guy (because in most cases it’s a guy, usually a white guy) returns to reclaim the identity his successor kept warm for him. And around and around goes the revolving door. It’s one of the most invariable properties of a medium that exists to sell loyal readers the “illusion of change” — an editorial dictum traditionally attributed to Marvel über-huckster Stan Lee — on a blanket marked All-New/All-Different. It allows Marvel and DC to use the language of disruption to hype temporary status-quo shifts and then use that same language to hype the inevitable reversion to form. This has been the case in superhero comics for so long that being cynical about it is like being cynical about autumn because it’s always undone by spring — which doesn’t stop comics fans from being cynical about it anyway.

The first issue of a Marvel comic called All-New Captain America went on sale yesterday. You can get it for $3.99, with a cover by series artist Stuart Immonen that features the new Captain America — Sam Wilson, known until recently as the Falcon — in a traditional heroic pose. Immonen’s cover looks like this. But if you’re so inclined, you can also purchase an edition of the same comic book with an “Incentive Custom Interscope Variant Cover” for the presumably collector-enticing list price of $170. That cover looks like this: 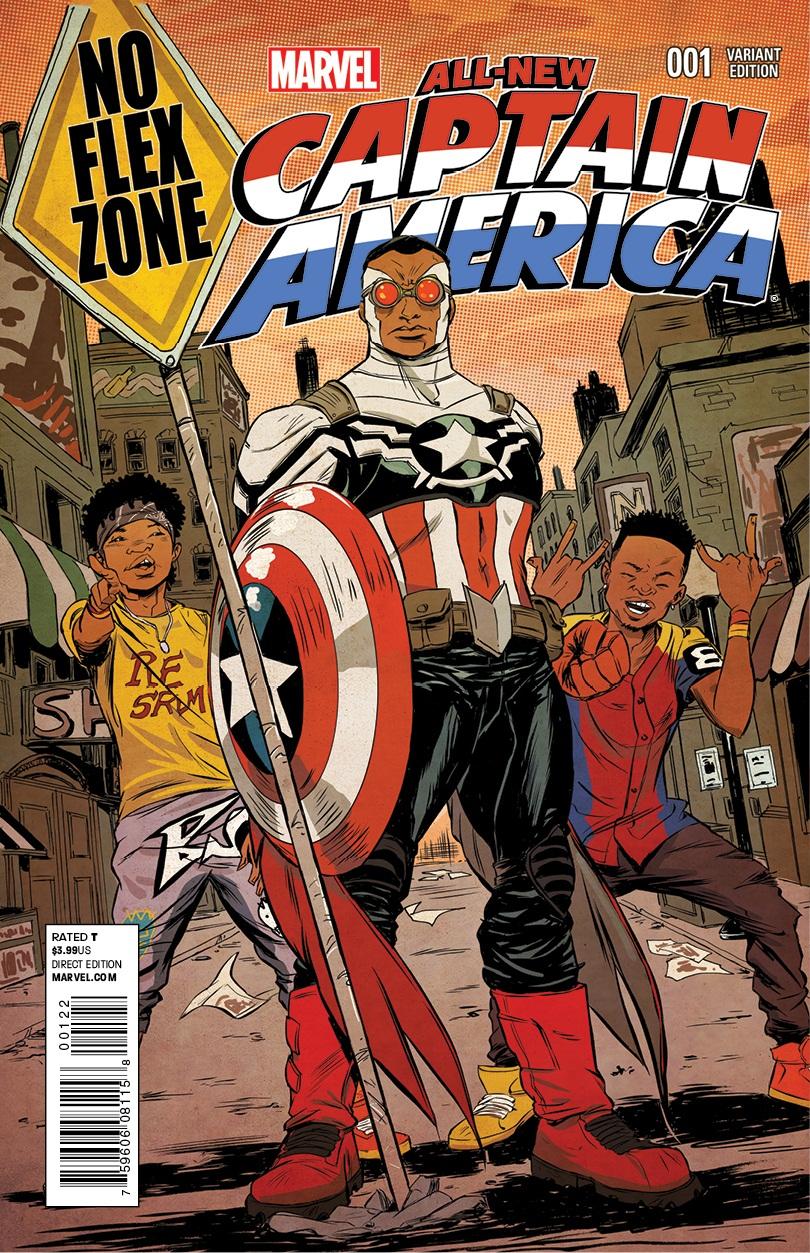 That’s the titular new Captain in the center, with the goggles; the young men to his right and left are Slim Jimmy and Swae Lee of the Tupelo, Mississippi, rap duo Rae Sremmurd. The street sign is a reference to its first hit, the plaintively trap-chirpy summer mega-earworm “No Flex Zone,” produced by Mike Will Made It. Rae Sremmurd is signed to Mike Will’s EarDrummers Entertainment imprint, a subsidiary of Interscope, hence the phrase “Interscope Variant.” We’ll talk more about Rae Sremmurd in a second.

The protagonist of All-New Captain America no. 1 is Sam Wilson, created by Stan Lee and Gene Colan and first introduced — as the Falcon — in the pages of 1969’s Captain America no. 117. The Falcon was Marvel’s first African American superhero character. (The Black Panther, who preceded him by two years in the pages of The Fantastic Four, was African but not American.) A former inner-city social worker (and in some versions of the story, petty criminal) who developed the power to communicate with birds after an encounter with the Cosmic Cube, Wilson was written as a friend and ally to Captain America, rather than a sidekick. This was a more-or-less unprecedented relationship in superhero comics. For a while, during Jack Kirby’s ’70s run on the book, Captain America was even retitled Captain America & the Falcon. In current Marvel continuity, Steve Rogers — the first man to wield the shield — has become a 90-year-old man after being stripped of the super-soldier formula that made him invulnerable and kept him physically young. He’s now a tactical adviser to his old pal Sam Wilson, who’s assumed the Captain America identity. All-New Captain America is written by Rick Remender, a smart and talented guy who’s found himself at the center of more than one Internet flap around the racial politics of his work and has occasionally handled those controversies quite badly. As a comic, this will be a story about a black superhero written by a white guy with something to prove, which means it’ll either be great or kind of embarrassing. For the moment, it’s a thought experiment.

Chris Evans has talked, albeit equivocally, about his tenure as the Marvel Movieverse’s Captain America coming to an end at some point; there’s speculation about the Sam-as-Cap plotline in the comics setting the stage for a future Marvel movie in which the Movieverse’s Falcon, played in Captain America: The Winter Soldier by Anthony Mackie, picks up the shield. This narrative — about Sam-Cap being merely a synergistic act of flag-planting — has legs because Captain America fans have been through all of this before. Steve Rogers was shot and apparently killed in a 2007 issue of Captain America. His former sidekick Bucky Barnes — the Winter Soldier — assumed the Cap identity and held on to it even after Rogers’s resurrection in 2009. It wasn’t a permanent passing of the torch, but replacing the steadfast (and historically pretty boring) Steve Rogers with a new guy even temporarily was good storytelling, in the sense that it opened doors; the comic became about a hero’s struggle to live up to an impossibly huge legacy and square his own values with the WWII-minted ideals that came with the Cap identity. Having the new new guy be Sam Wilson has even more obvious story potential; suddenly it’s a book about what it means for Wilson to almost literally wrap himself in a flag no African American can pretend has always stood exclusively for freedom. Suddenly the book is a conversation about the symbolic payload of that flag, which is what you’d hope but not necessarily expect a book called Captain America to be. (Robert Morales and Kyle Baker’s Truth: Red, White & Black, which told the story of a Tuskeegee-like super-soldier experiment in the Marvel Universe of the ’40s, came close, but that was a seven-issue limited series; this is Captain America.)

If you know anything about comics fans and their attachment to specific iterations of iconic characters, and about the kinds of emotional reactions for which Internet comment sections customarily serve as a pressure valve, I probably don’t have to explain that not everyone is psyched about Sam Wilson’s new role. If you’re on alert for examples of the theoretical encroachment upon our freedoms by something people are apparently still calling “political correctness” in 2014, the fact that there’s now a black Captain America — like the presence of a female God of Thunder in the pages of Thor, and a Pakistani American Ms. Marvel in Ms. Marvel, and a Spider-Man who’s half-black and half-Mexican in the alternate-universe title Ultimate Spider-Man, and the casting of Idris Elba as a Norse god in the Thor movies — is hell-in-a-handbasket stuff. And the fact that everybody knows these status quo changes are publicity-driven and temporary provides change-averse fans (and, let’s be honest, black-superhero-averse fans, too) with rhetorical cover. The notion that the person in the Captain America suit should be white because he’s always been white is a tautology with obvious racist underpinnings; it’s harder to refute the argument that introducing a nonwhite Cap is just a cynical publicity stunt, because it isn’t not that.

This Rae Sremmurd cover doesn’t help disprove that idea, either. Nothing says “calculated PR move” like slapping this summer’s hottest teenageish pop-rappers on the cover of a book they’re not actually in. On the other hand: It’s a picture of Rae Sremmurd! Patrolling the No Flex Zone with their cool new friend Captain America! With Slim Jimmy and Swae Lee drawn to look uncannily like the Yakuza-fighting orphans Black and White from the classic manga series Tekkonkinkreet! I’m as jaded as anybody about the motivations of corporations and of Marvel in particular (which, like Grantland, is owned by Disney.) Would it be a whole lot cooler if Marvel put 10 percent of the effort it currently puts into promoting gender/race-swapped versions of brand-name superheroes into creating new nonwhite/non-male characters and growing its roster of nonwhite/non-male creators? Sure. Is daring to posit a black character as the embodiment of patriotism and lawful-goodness in 2014 really an achievement worth taking a victory lap on? Because at the end of the day, what’s Sam Wilson? A ruggedly handsome adult with great references. He can wear the archetype without a lot of alterations. Slim Jimmy and Swae Lee are African-American men aged 19 and 20. This is not a demographic group with a heroic reputation in the popular consciousness; if anything, it’s one that many people learn to fear and distrust on general principles, sometimes with tragic results. Because their depictions of the fantastic depend on the establishment of a realistic context, comics are powerful ratifiers of what and who is normal, average, regular. This picture of Rae Sremmurd enforcing the one rule of the No Flex Zone with their new friend Captain America is important because it tells kids who look like Rae Sremmurd that Captain America stands with them, and that any Captain America would.