By the time the author David Foster Wallace committed suicide in 2008, he had already become a myth: a tobacco-chewing, bandanna-wearing genius who suffered under the weight of his own empathy. Since then, three versions of him have entered the picture. One is a 2012 biography by New Yorker writer D.T. Max called Every Love Story Is a Ghost Story. Another is a book by the Rolling Stone writer David Lipsky, called Although of Course You End Up Becoming Yourself: A Roadtrip With David Foster Wallace, which documents five days of conversation with Wallace as he finishes a tour for Infinite Jest, a novel more famous for its difficulty than for its content.1

Lipsky’s reporting was done in 1996 and meant to become a Rolling Stone profile about an important young writer on the rise, but the profile was scrapped and only surfaced as a book in 2010.

Now comes a movie based on Lipsky’s book, called The End of the Tour. Lipsky (played by Jesse Eisenberg) is a nervous reporter fidgeting in the cold shadow of Wallace’s brain. Wallace (played by Jason Segel) is an artist reluctantly composing himself for the spotlight. Lipsky longs for Wallace’s success without fully recognizing his depression; Wallace urges Lipsky to relax and focus on being a good guy.

Tour is a road movie. Set in winter, we feel the crummy heat of Lipsky’s rental car and the oceans of Midwestern plain, static and blanketed in snow. It’s also a movie about words. Wallace was a famously precise (and verbose) writer who seemed to always be trying to render feeling into words. Some controversy is ginned up for the sake of narrative (Wallace gets jealous when Lipsky flirts with one of Wallace’s ex-girlfriends), but mostly we see two people trying to talk their way to the bottom of the universe. Ultimately, maybe secretly, the movie is about men: how they circle each other, each moment of connection and vulnerability followed by a brief retreat, like the Moro reflex of babies who throw up their hands when they think they’re falling. 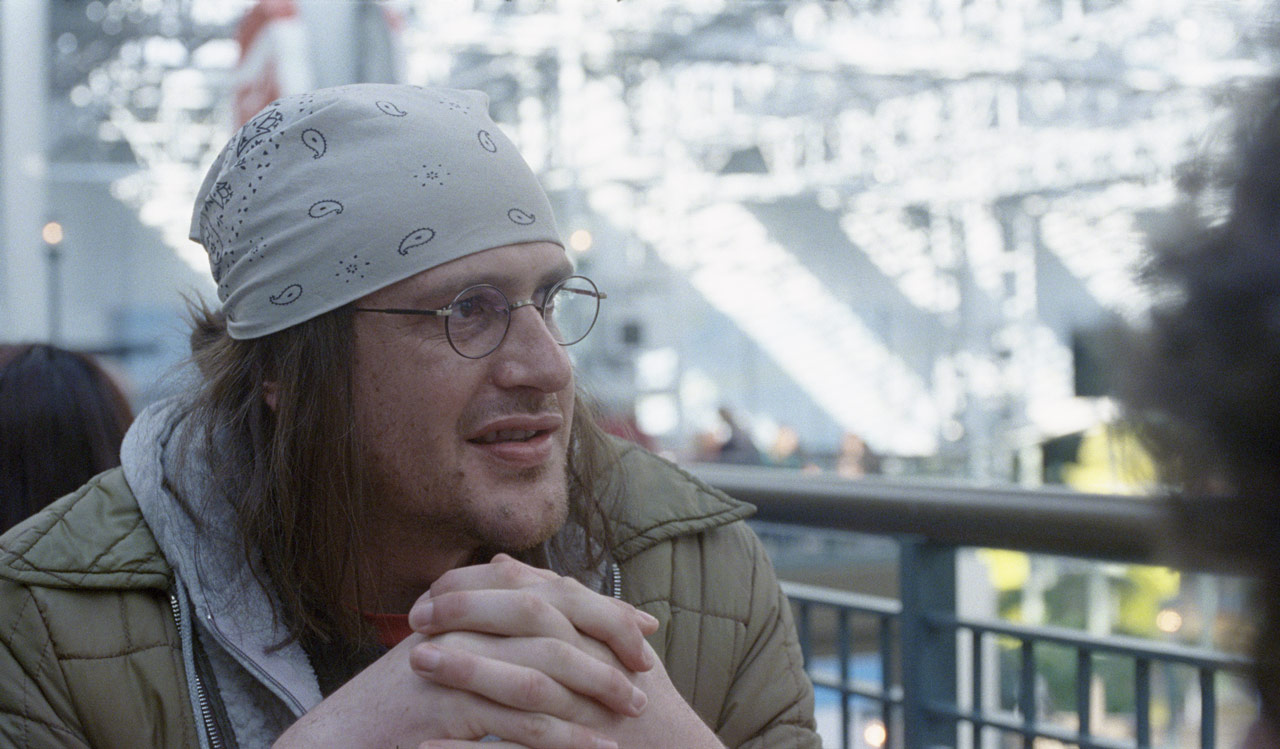 Tour is being hailed as an about-face for Segel, a vault from the pap of How I Met Your Mother into the consecrated world of realness. Anyone who has seen him act knows this is too simple. Segel has always been a nourishing presence — a hominid St. Bernard, Friar Tuck in board shorts. In certain ways, The End of the Tour isn’t all that different from something like I Love You, Man, which pushes the same buttons, only with a brighter mood and Rush instead of John Barth. Importantly, both movies climax with Segel dancing.

One of the interesting things about watching these posthumous Wallaces emerge is seeing where they do and don’t overlap. The Wallace of Lipsky’s book is warm but slightly irritated, not by Lipsky’s inability to keep up with him but by the fact that Lipsky is there at all. Segel — working from a script by the Pulitzer-winning playwright Donald Margulies and under the direction of James Ponsoldt — makes Wallace seem saintly, someone for whom saying almost anything entails moving huge internal weight. (Wallace’s trust has come out against Tour outright.) Of the narratives — those of Lipsky, fictionalized Lipsky, and Max — Max’s is the richest in part because it’s the most unsentimental: Instead of a eulogy or a resurrection, we get a long, cool autopsy.

The more sensitive the material, the wider the gaps get. At one point, Lipsky’s Wallace insists that the most he can hope for from the book tour is to get laid, then says that getting laid would only make him lonely — gruff talk neutralized by self-examination. In Love Story, we see Wallace striding across the quad, spring semester senior year, a literal A+ student with a 500-page novel and a thesis on philosophical logic stowed in his cubby, talking about “the smell of cunt in the air.” After a depression-related breakdown in college, Wallace wrote a friend, saying, “You now see before you, indirectly at least, the real ‘Waller’: an obscurely defective commodity that has also been somewhat damaged in transit.” Talking to Lipsky, there’s no mention of “the real Waller.”

As a writer, Wallace was obsessed by image, by the weight of the veil. “The more people think that you’re really good, actually the stronger the fear of being a fraud is,” he tells Lipsky in the book.2 His 2001 profile of John McCain (“Up, Simba!”) fixates less on the politician than on the television cameramen surrounding him; in the same book (Consider the Lobster), an essay on porn tries to locate the precise moment at which an actor might be genuinely enjoying him- or herself behind the performance. During college, Wallace fell in love with the work of Thomas Pynchon, an author whose books posit existence as a kind of tornado — a lot of noise with a hole in the middle. Wallace’s biggest departure was to suggest that the hole is hard to get to but there might actually be something in it.

“Fraud” is the single most powerful word in the Wallace story “Good Old Neon,” in which an advertising executive describes his reasons for suicide from the grave.

At one point in Tour, Wallace suggests that he and Lipsky switch roles; that Wallace should profile the profiler. Characteristically, he spends one sentence floating the idea, the next dismissing it (“way too pomo and cute”), and a paragraph dissecting why he said it in the first place. “If you wanted, I mean, you’re gonna be able to shape this essentially how you want,” he says. “And that, to me, is extremely disturbing. Because I want to be able to try and shape and manage the impression of me that’s coming across.” But fretting about the perils of being interviewed isn’t a surrender of control; it’s an exercise of it.

During one of Tour’s wordless interstices, as the camera’s attention diffuses into the vast Midwestern plains to which Wallace was so drawn, we hear a Brian Eno song called “The Big Ship.” It is quiet, patient music, insular but revelatory, almost natal. “This song is making me feel both warm and safe,” the “David Wallace” character says in Wallace’s posthumous novel The Pale King. “As though cocooned like a little boy that’s just been taken out of the bath and wrapped in towels that have been washed so many times they’re incredibly soft, and also at the same time feeling sad; there’s an emptiness at the center of the warmth like the way an empty church or classroom with lots of windows through which you can only see rain in the street is sad, as though right at the center of this safe, enclosed feeling is the seed of emptiness.”

The prose is inflated, the thinking muddled — a big brain steering tighter and tighter circles around the ineffable in hopes of getting a clearer look. But somewhere in the gulf between the experience of the song and the failure of Wallace to capture its majesty is the suggestion that seeing the truth any more clearly would leave you blind. Better, more grounded, more evocative of the interpersonal gulfs his writing tried to bridge, is a passage from D.T. Max’s book, about an Amherst friend of Wallace’s named Charlie McLagan. McLagan lived at the outskirts of campus, in a room that everyone called “the Womb,” which had madras prints on the wall, where Wallace would occasionally hole up and take drugs. “Don’t do LSD and don’t do coke, because they’re both dangerous and expensive in that order,” he wrote another friend at the time. Mushrooms were OK, though. D.T. Max: “While they tripped, Wallace and McLagan would listen over and over to ‘The Big Ship’ by Brian Eno on McLagan’s expensive stereo. McLagan heard birth in it; Wallace thought it captured the earth in the time of the dinosaurs.” Two boys, stripped of pretense, sometimes talking but more importantly not.