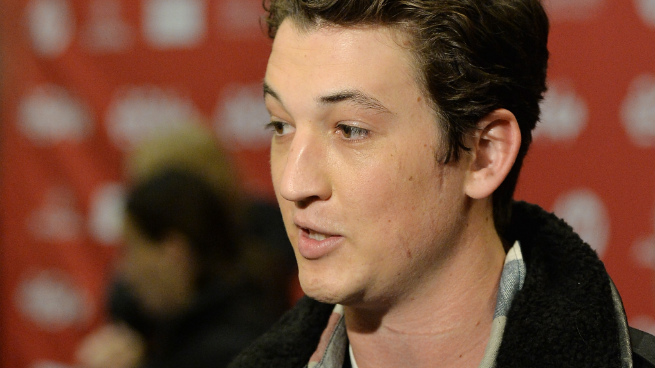 Miles Teller: so hot right now. After a couple of years of being the best part of movies you didn’t see (Project X, 21 & Over, the Footloose remake), the chatty young man broke through in 2013 with his lead turn in The Spectacular Now. As Sutter — an aimless, charming high school senior a bit overly fond of whiskey-and–Big Gulp — Teller gave the best showcase to date of his rambling schmoozer “young Cusack” screen persona, and became a verified Dude to Watch. Then, just last week, Teller’s Whiplash opened Sundance and earned him a whole new slew of drooly fawning (EW pulls no punches: “‘Whiplash’ is the movie that could make Miles Teller a star”). The flick, currently being described as “Full Metal Jacket at Juilliard,” has Teller, as a jazz drummer wunderkind, playing against the great J.K. Simmons, as a ruthlessly demanding music teacher. Also, it sounds dope.

So, what’s next for Miles? How about playing, uh, Dan Aykroyd?

Nothing’s confirmed yet, but Teller has been offered the role of Aykroyd in an upcoming John Belushi biopic, which stars Emile Hirsch. Amusingly enough, it was Hirsch who leaked the news, by way of mid-Saturday night Sundance party announcement: “A shout-out to Miles Teller! We’re going to be working together soon. He’s playing Dan Aykroyd in the Belushi movie.” According to Teller’s reps, the actor won’t confirm the role until after he’s done with press duties for That Awkward Moment, the upcoming guy-POV rom-com in which he stars alongside Michael B. Jordan, Zac Efron, and Zac Efron’s butt.

As we’ve mentioned before, this Belushi biopic is being co-produced by Aykroyd and Belushi’s widow, Judy Belushi-Pisano, and is being adapted from Belushi-Pisano’s 2005 biography of her late husband. Which is only appropriate: The first time Belushi got a biopic, it was 1989’s Wired, which starred Michael Chiklis (!), and was adapted from Bob Woodward’s (!!) 1984 biography Wired: The Short Life and Fast Times of John Belushi.

That book, which focused disproportionately on Belushi’s drug problems, was widely rejected by Belushi’s family, friends, and collaborators, and Belushi-Pisano’s own biography was intended to counteract the damage that Woodward’s book had on Belushi’s reputation. In an excellent piece for Slate from early 2013, Belushi-Pisano’s co-writer Tanner Colby explains the odd process of re-reporting Woodward’s book, and coming to completely opposite conclusions. Explains Colby: “Like a funhouse mirror, Woodward’s prose distorts what it purports to reflect. Moments of tearful drama are rendered as tersely as an accounting of Belushi’s car-service receipts. Friendly jokes are stripped of their humor and turned into boorish annoyances … it’s like someone wrote a biography of Michael Jordan in which all the stats and scores are correct, but you come away with the impression that Michael Jordan wasn’t very good at playing basketball.”

Adds hall of fame SNL writer Tom Davis (via his comedy partner Al Franken): “[I]t’s as if someone wrote a book about your college years and called it Puked. And all it was about was who puked, when they puked, what they ate before they puked and what they puked up. No one read Dostoevsky, no one studied math, no one fell in love, and nothing happened but people puking.”

All of which is to say this: Get psyched for what appears to be a more truthful account of the life of John Belushi, which will possibly be co-starring Miles Teller!

On a more personal note: The rise of Teller can only mean good things for my continued campaign to convince the world that the new Footloose was a modern cinematic marvel.