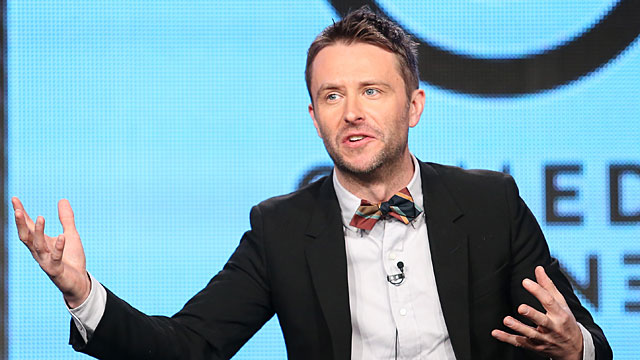 As the host of everything from his own long-running Nerdist podcast to AMC’s Talking Dead, Chris Hardwick is engaging, polished, and often very funny. Yet his more lasting legacy may be the way he’s managed to professionalize his boundless enthusiasm. From his perch atop Mount Nerdist, Hardwick champions long-derided genres, celebrates comedians and celebrities, and, in the process, raises fandom into an art form all its own.

A year or so ago, I wrote a column that was mildly critical of Hardwick and hugely skeptical of the rise of the geek-servicing entertainment complex he seemed to represent. Perhaps unsurprisingly given his public persona, Hardwick was enormously gracious about what I had written and followed up with me over email. Now that he’s on our TVs nightly as the host of the highly entertaining Comedy Central game show @Midnight, it seemed an ideal time to take that conversation public and transform the consummate host into a guest. Over the course of a very spirited (and profane!) hour-plus, Hardwick talked to me about his early life, his “survival years” hosting dating shows he’d rather not name, and taking meetings he’d rather not remember, as well as the moment he finally began pursuing projects that interested him instead of just paychecks. No topic is spared: not our differing opinions of The Walking Dead, nor our surprisingly similar views on the value of criticism, and certainly not that one particular column from a year ago. In the end, I think we both learned a lot. For example, I now know which TV show Chris Hardwick actually dislikes, albeit in a very Hardwickian way. To find out for yourself, you’ll just have to listen.