Before we review yesterday’s voting results, I’d like to say a few words about Brother Mouzone. Due to widespread bureaucratic failure and alleged ballot stuffing, Brother Mouzone snuck into Smacketology as an 8-seed. I’d like to say before God and David Simon that the seedings found in Smacketology do not reflect the views of the entirety of the Grantland staff. Were it up to me, Slim Charles, Beadie, Syndor, Fruit, or even Telly from Kids would have made it in over Brother Mouzone. In my head, show business is some Illuminati conspiracy in which the man at the top of the phone tree screams phlegmatically to “make it shorter!” and turns every good idea into a two-minute spot where the Idol finalists drink Pepsi and drive around in fuel-efficient Ford subcompacts. As such, I’ve always blamed the character of Brother Mouzone — The Wire’s only misfire — on that illuminati head and his severe lack of imagination. What else could explain why the creators of the show, after three years of brilliantly paced, patient character development, would throw in a cartoon character who speaks in clichés and doesn’t jive with any of the show’s internal logic? I could accept Brother Mouzone chasing Cam and Ben around the Lower East Side in an episode of How to Make It in America, but I cannot accept him walking through the low-rises. And neither should you.

Please vote him out as quickly as possible.

On to your comments/questions …

A good question that lies at the heart of some of our seeding controversies. Clearly, some measure of bad mofo-ness/gulliness went into the seedings, and I’d imagine that in the end, gulliness will ultimately determine the winner. For example, over five seasons, Jimmy McNulty went through one of the most dramatic and compelling character arcs in the history of television. He, despite being a moderately bad mofo, is a 3-seed while his partner, Bunk Moreland, a legit bad mofo who burned his clothes and told off the baddest mofo in the game, came in as a 1-seed. When the lazier comp-lit grad students of America descend on The Wire with whatever Lacanian angle, they’ll probably turn McNulty into some 400-page argument about A vs. a, but Bunk’s the guy they’ll be watching on YouTube. (For those counting, I referenced Wikipedia three times to write that last sentence.) Let’s just watch Bunk’s best scene right now.

After review, I’d say that you should vote based on the following criteria:

Jacob, I totally agree. Bubbles almost didn’t make the field, despite being the sole representative of the addict community. He certainly wasn’t gully, but his guilt over Sherrod’s death and the tenderness he showed Telly from Kids was the necessary, ultimately heartbreaking counterpoint to all the guilt-ridden glamor of The Game. 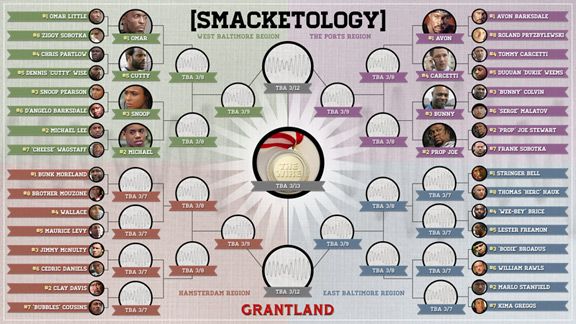 In the stacked East Baltimore bracket, Stringer Bell, Marlo, Bodie, and Wee-Bay are all arguably no. 1 seeds, especially if we use gulliness as the main criteria for voting. My heart wants Bodie to go on a run — when he finally went down, I felt like I had lost a friend. There’s a chance that his quiet, dignified loyalty could get him past Marlo in the Sweet 16, but there’s no way he gets past Stringer, who should really just change his name to L.L. Idris E. Because if there’s anyone who’s going to steal everyone’s girlfriend, it’s that fucking guy.

In Hamsterdam, I expect Levy to upset Wallace and take a run at Bunk in the second round. A couple of weeks back, some friends and I tried to do a Wire fantasy draft in which we tried to pick a crew. Stringer went first, Marlo went second, Levy went third. He was arguably the most gangster dude in the game and certainly one of the most ruthless. That should carry him in Round 1 … Bubbles will make it close against Clay Davis, but there’s just too much power in that “Sheeeeit.” McNulty’s outraged fans will take him past Daniels, who arguably shouldn’t be in the tournament, and will probably get him past Clay Davis, setting up the great McNulty versus Bunk Elite 8 matchup. If that happens, I’m starting a Bunk voting campaign and wearing the YouTube video of him telling off Omar on a T-shirt.