Say this for the rapidly diminishing returns of the Sharknado franchise: It is a minor miracle that its downfall is something to be remarked upon at all. The fact that there’s anything to be missed from a TV movie series about waterspouts that suck up sharks and deposit them on metropolitan areas … that’s not nothing. Remember how the original offering captivated a nation on a boring summer night in 2013? When you miss that feeling, just cherish the existence of that two-hour block of television. If you were there, you’ve been blessed, and that’s going to have to be enough. Because while it’s amazing that Sharknado is now a brand, Sharknado as a brand … it’s gotten so corporate, man.

Nobody could have predicted the breakout social media fever that would erupt from an Ian Ziering–Tara Reid vehicle about cartilaginous fish and meteorology, and nowhere is that more apparent than in Sharknado 2: The Second One and last night’s Sharknado 3: Oh Hell No! Syfy’s response to the phenomenon they found on their hands two summers ago has been a high-volume solution: two more movies in two more years. (Say this for the Thor movies: At least they can’t make them quite this fast.)

With Los Angeles and New York devastated in the series’ first two installments, Sharknado 3 further ramps up the destructive volume by allowing the toothy tornados to ravage the East Coast. Washington, D.C. gets it first, followed by (mostly offscreen) chaos in Charleston, and finally central Florida. It’s an attempt at a road movie, following Ziering’s shark-fighting Fin from our nation’s capital to Orlando and into outer space via car, fortified war-bus, fighter jet, NASCAR, and top-secret shuttle, bogged down at every turn by what has become an utterly exhausting parade of cameo appearances.

Sharknado 3 has made inauspicious headlines in the months and weeks leading up to its release, with fallout from a strike and Jared-from-Subway’s excised appearance grabbing up valuable media real estate that the filmmakers would prefer be devoted to listing all the famous and famous-ish faces scheduled to pop up onscreen during the course of the movie. Cameo-spotting is the spectator sport of Sharknado fandom; I’m not going to attempt to list or even mention them all, not when I could just link to the cast list. The cameos exist to get people with jobs like mine to write about them,1 but I’m already here for the movie, because it’s about a tornado filled with sharks. Either you are here for Hoda and Kathie Lee waving broken wine bottles at the camera, or you are not. (Or you are like me and you are here in spite of all that.) The cameos have gotten so thick in the franchise that whenever there’s a non-famous face on the screen, you start to worry you might have missed something. But more than that: They’re an unnecessary crutch, used to drum up buzz for a franchise that generates plenty on its own. You have a hit series based around a tornado filled with sharks, Syfy! You don’t have to keep trying to make it a thing! You’re at the mountaintop! You are now free to enjoy the view, without repeatedly inflicting Matt Lauer on your captive audience!

They also exist because folks are now openly lobbying to get into the movie, which, yes, I wish I’d thought to do myself.

This is not to say Sharknado 3 is without its moments of magic. Here are 10 of them, reverse-ranked in order of pure glee inflicted:

10. There is a clutch of protesters in an early scene, some of whom seem to just be protesting sharks themselves, with signs like “SHARKS GO HOME” and “TAKE YOUR JAWS OFF MY BODY!” 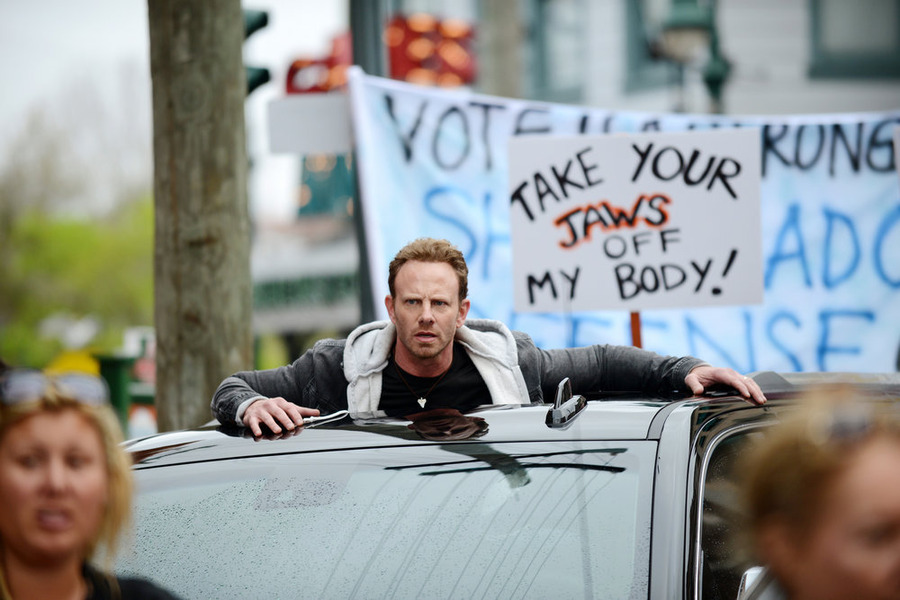 9. President Mark Cuban (who at one point is called upon to utter the line, “They used to call me a shark, but now I’m looked upon as a beacon of hope,” and brothers and sisters, Poseidon help me, he nails it) appointing Fin the first member of the “Order of the Golden Chainsaw,” and, this is like six minutes into the movie.

8. Frankie Muniz as a mad scientist with some kind of plasma cannon? 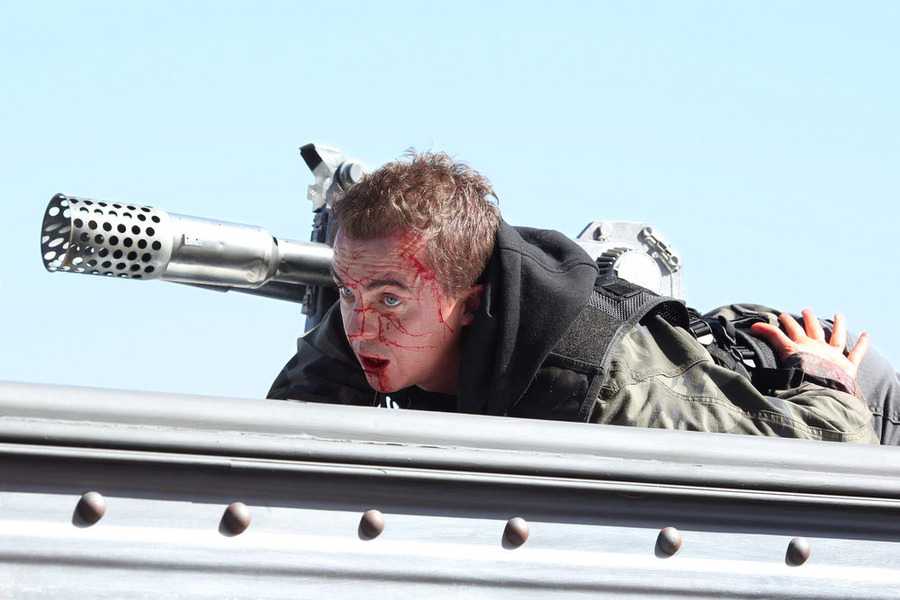 7. The most creative Daytona 500 crash you will ever see onscreen.

6. I stopped the DVR at about the 15-minute mark and said aloud, “I hope Cassie Scerbo from the first movie turns up as Nova again, and I hope she’s the Quint of this movie too,” and you know what? She sort of is! 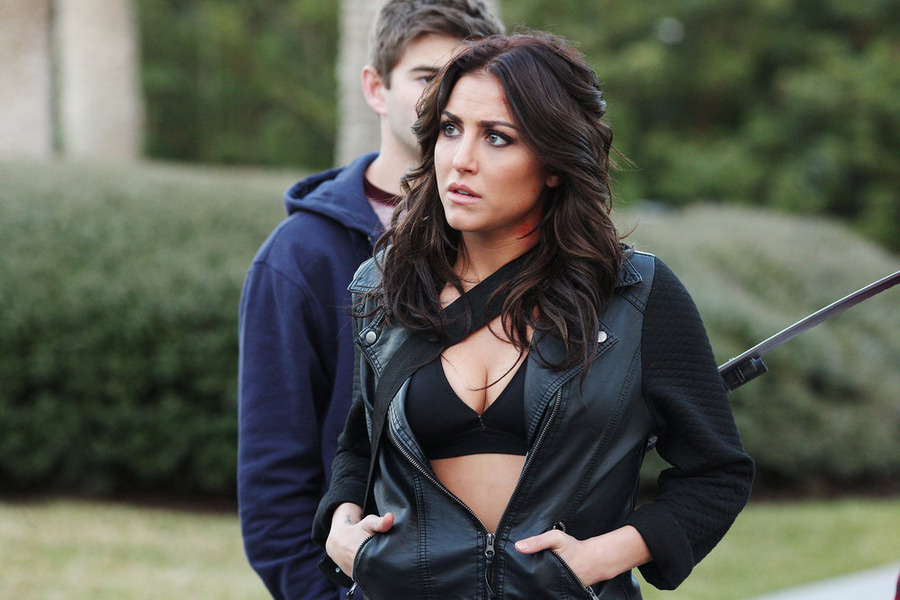 5. Scerbo also delivers the weirdest product placement I’ve seen maybe ever, firing tubes of Benefit mascara out of a rifle when she runs out of bullets.

4. She also gets the best line, asking Fin if he can get ahold of NASA, because “We need to create a tower of flame 60 miles high, burning at temperatures hotter than the surface of the sun,” as casually as though she were discussing the weather, which of course she is!

3. The fact that Ziering was not kidding with this:

To the Astronauts living under water scouting locations for Sharknado3, we thank you. #NEEMO, #NASA #Sharknado2 pic.twitter.com/B5pt4hewFM

1. The big finale. The Second One exceeded the first Sharknado in spectacle but really neglected to live up to Fin’s original finishing move of jumping into the jaws of a plummeting great white, chainsaw at the ready, to save Nova.

Oh Hell No puts both Fin and reunited wife April (Reid) inside the belly of a beast plummeting to earth out of low orbit, and while he busily punches a hole in the shark’s flesh through which to deploy a parachute, she’s giving birth to their son. This is what we signed on for, Syfy. This is the implicit contract your viewers sign when they change that channel over every July, not the promise of seeing every person who’s ever gotten direct deposit from an NBC Universal property eaten by animated sea creatures.

This last one is of particular importance to those clinging to the simple delights of the first Sharknado. Just about every minute of every movie since then has felt like a checklist, but Oh Hell No does rediscover its way at the end: Just a family on a beach, greeting a new day and a new son and brother, covered in aquatic innards. It’s a refreshing return to form, and it bodes well for the inevitable, unpreventable fourth movie, for which I have the following helpful suggestions:

Or maybe it’s just a dead-of-summer, made-for-TV creature feature worthy of no more scrutiny than its title might suggest, and we should all calm down. But when you love something, truly love something, and by Neptune’s trident do I ever love this concept, isn’t it natural to wish for it to be its best self, to take its most perfect form? I might just be a girl, standing in front of a movie about airborne sharks, asking it to take some pride in its craftsmanship, but I know my answer, and it isn’t Hell No.