After 20 episodes of Season 5, the penultimate installment circled back to whence we came. Ryan, Bob Little, and Gwen all returned, and Joel got some Braverman face time. It’s the circle of Braverman life.

Of all the characters who have come and gone on Parenthood, the one I’d gladly never watch again is Ryan, Amber’s ex-fiancé. Last night may have been the most optimal Ryan appearance, though. We saw him only for a few moments, lying in a hospital bed, saying nothing. However, I can only assume some supposedly emotional discussion about life and the future will ensue next week between the formerly betrothed. Ryan is not a good match for Amber, though. What is his future? What does he offer her? He was not particularly supportive. He was reckless. He struggles with a drinking problem. Hopefully, next episode will feature a good-bye, and we can all move on.

Prepare the tissues, because you’ll be furious and sad, Part 2

Amber gets a phone call alerting her that Ryan is in the hospital in San Diego. First she sits on the pavement. Then she goes to her car to drive to the other end of the state. The drive from Berkeley to San Diego is so long (495 miles) that Google suggests flying before driving! I’ve never encountered this before. 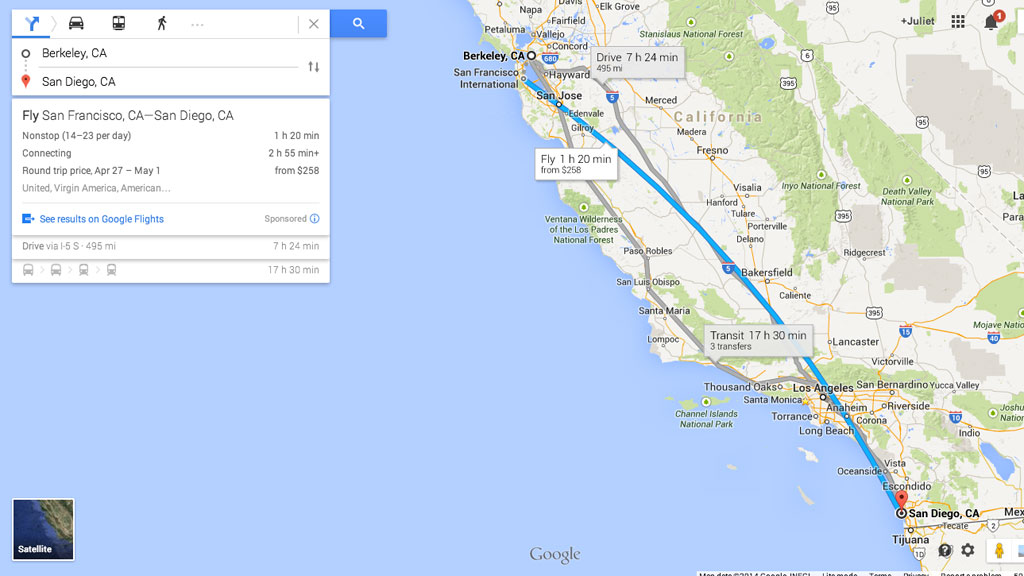 Hank steps in and offers to make the absurd 500-mile drive. Amber had just dropped off Max at Hank’s studio after school, so let’s generously assume it’s approximately 3:30 p.m. If Hank and Amber leave at 3:40 p.m. at the latest, maybe they get to San Diego by 1 a.m., if they’re lucky with minimal traffic. Sarah comes prancing into the hospital sometime while it’s still dark, and after Amber had been sleeping on Hank’s shoulder for an hour or two. So it’s 4 a.m.? 5 a.m.? Did Sarah drive too? She really should have just taken a flight and met them there sooner. She could have arrived first! This whole sequence was maddening. I ascribe to the idea that we need to treat fictional TV shows as closed systems, where their own rules of logic apply. But the discrepancies were too distracting here.

Luckily, Ray Romano is a gifted physical actor, and he saved the day for Amber and the scene for viewers. He attempts to pick up a magazine without waking Amber, who is sleeping on his shoulder. In a short scene with no dialogue, he captured what makes Hank so lovable but also so problematic for Sarah. He is at once caring but unsure of how the emotion should dictate his actions. It was hilarious, and sweet.

Drew has taken the weirdest turns this season, and I mean that in the most positive way possible. I thought he reached a season high when he began chucking full cans of beer at his roommate, but his stock as resident overly moody Braverman shot up based on the music he chose for studying. First, he pored over his astronomy notes in the common room while listening to a soundtrack of ocean waves. Later he retreated to his room to study, where he listened to some dramatic classical music. Somehow, the quiet teenager has become the source of comic relief. While everyone else is mired in crisis, sometimes real and sometimes self-inflicted, Drew’s tribulations are relatively breezy. Like many college kids, he treats his own life with a seriousness greater than the actual situation warrants, and it’s fun to watch.

Is it time to revise the Braverman Power Rankings? Season 4 was all about Kristina and her cancer, but she has become one of the top three family members in Season 5. Kristina is fierce, in the word’s uncorrupted sense. Thursday night we saw her confront her nemesis, Bob Little, which was a reminder of her competitiveness and that the dumb mayoral campaign was also going on this season. But we also got to see her great compassion, which is the motivating factor behind the charter school; it was on full display as she said good-bye to Gwen, her friend from chemo. Maybe I like Gwen because she played Gypsy on Gilmore Girls, but friendship is not a theme commonly explored on Parenthood. Who needs pals when you have cousins? And how do you create screen time for friends when this cast is already gigantic? Kristina and Adam’s relationship is arguably the most integral to the show, yet Kristina still operates as if she were something of an outsider. Just last week she reminded us that she’s from Cleveland. It’s not fair that she loses her one nonfamily friend.