The arbiters at bechdeltest.com initially determined that David Fincher’s adaptation of Gillian Flynn’s best-selling potboiler passed all three standards of the cartoonist-author Alison Bechdel’s culture-assessing exam. They were wrong, but it was a simple mistake — a misunderstanding of a scene in which Rosamund Pike’s incognito and on-the-run Amy Dunne chats with Lola Kirke’s Greta about her very own disappearance. In fact, the conversation is mostly about Amy’s accused husband, Nick, and thus the scene has (1) two (named) female characters who are (2) talking to each other, but not (3) about something other than a man. The Bechdel Test is often applied to indicate a failure of point of view, a sly disclosure about the powers that be who create and control our popular entertainment. Flynn is a woman and the movie’s screenwriter, but as director, Fincher is the true author of Gone Girl. And he’s always had a complicated relationship with female characters, favoring steely survivors like Jodie Foster’s divorcée in Panic Room, Alien3’s Ripley, and Lisbeth Salander in The Girl With the Dragon Tattoo. But “Amazing” Amy Dunne is only a survivor of the hell she hath wrought upon her life, or at least that’s the case for Fincher’s Amy.

So it is strange that while Fincher’s movie flunks a fundamental criterion, it does feature an abundance of interesting female characters with real, I know her identities. Upon release, the movie and its portrayal of Amy were called “misogynist,” “feminist,” or both. And perhaps it is, though that debate now feels like a shadow in the dark. Since arriving in homes, it resembles something more like the twisty, sociopathic thrillers to which it aspires. (Second and third viewings had me thinking not of Susan Sontag or John Updike, but slickly harrowing psychodramas like Deathtrap and Sleuth.) Pike’s Oscar nomination comes at a time when, once again, the Best Actress field is almost barren and often bunk. Most actresses are still stuck playing someone’s wife or someone’s mother or someone’s mistress, and often little else. Pike gets to play three roles in Gone Girl: the Cool Girl, the Cool Girl’s Cool Girl, and the Lose-Her-Cool Girl. She’s brilliant throughout — icy but burning, mendacious and miraculous. She never raises her voice once, and doesn’t have to. But there is more in the movie than Amy and Affleck. Tyler Perry got much of the supporting credit for his merry and shockingly entertaining turn as super-lawyer Tanner Bolt, but focus on all the non-Pike actresses in this movie, with their typically small but no less sharp and equally confounding roles. I would watch a movie built around all of them.

Easily my favorite character, Carrie Coon’s Go is the throbbing conscience of the movie, the cold slap across the face of everyone who finds themselves empathizing with Ben Affleck’s slack-jawed Nick. She is Amy’s inversion — emotional, rough-hewn, and draped in browns and beiges. Nick and Go are twins, and when the movie was released, I wrote that they share a biorhythm that keeps the movie’s blood flowing. Without Go, Nick has no one to disappoint and no one who will support him. But she is more than that. She becomes a minor detective, and then an accused herself — at one point, the Dunne siblings are shamed by the implication of “twincest” by a pair of men watching cable news in an airport. Coon is an astonishing performer, mostly unknown until this summer’s The Leftovers, on which she was the severe center, ticking steadily like a time bomb. She was the show’s Amazing Amy, actually. That she is a crumpled pile of human on the kitchen floor at the end of Gone Girl is a testament to range. “Of course I’m with you. I was with you before we were even born,” she says to Nick, through tears, near the end of the movie, after he’s agreed to stick it out with Psychotic-Break Amy. Where else would she go? They’re bound together. 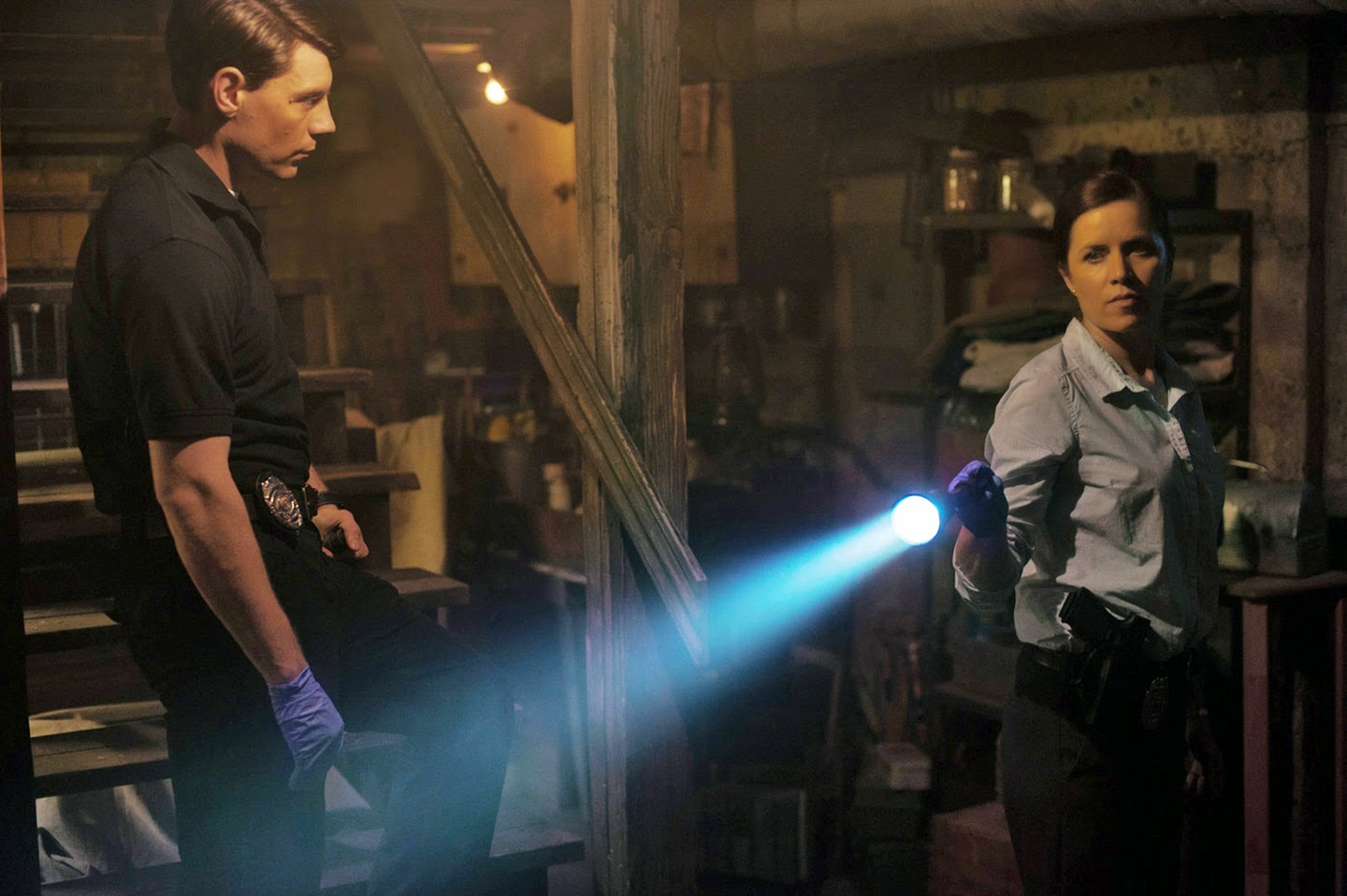 Kim Dickens heads unite. Dickens, always tough and unwavering, has been haunting short-run roles in iconic TV series like Friday Night Lights, Deadwood, Sons of Anarchy, and Lost for more than 10 years. She is a true That Gal. The empathetic and then not Detective Boney may be her most high-profile role yet, impressive and uncommon for a 49-year-old actress. Boney spends the first half of Gone Girl looking for reasons to believe Nick, and then just when it is confirmed for us that Nick has indeed been framed for his wife’s disappearance, Boney becomes certain he’s guilty. She is Gone Girl’s true patsy, like Sam Spade in reverse. And yet, we never turn on Boney, never hate her for getting it wrong. Dickens plays Boney as folksy but searching — a detective who doesn’t leap to conclusions, no matter what her partner insists is true. There’s a reason she sticks around to the end, and a reason that when she questions Amy in a hospital after her shocking return to St. Louis, we root for Boney to out her master plan in front of the FBI. She never gets her chance, thwarted by the dumbfounded men working so hard to evince concern in the face of a rape crisis. Boney and Amy’s brief encounter also fails the Bechdel Test, but one suspects that if they were both forced to be truthful with each other, it’s not men they’d be talking about, but more likely how to pull off the perfect crime. Someone get cracking on Skull and Boney, the next great TNT drama. 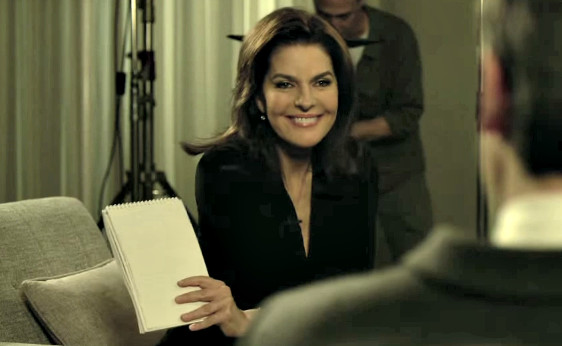 Diane Sawyer and Nancy Grace sit at the two poles of American TV news. One calmly questions and assuages our concerns with a graceful, composed intelligence. The other hectors and scowls with all the elegance of a rabid cheetah. In Gone Girl, the comedic actress Missi Pyle is a Grace proxy named Ellen Abbott. Sela Ward, one-time Alabama cheerleader and longtime TV star with a raven-like femininity, is the aggressive but sensitive Sharon Schieber. Sawyer isn’t quite Schieber — no one is as beloved or intimidating as we’re meant to believe Schieber to be here. But they’re close enough. 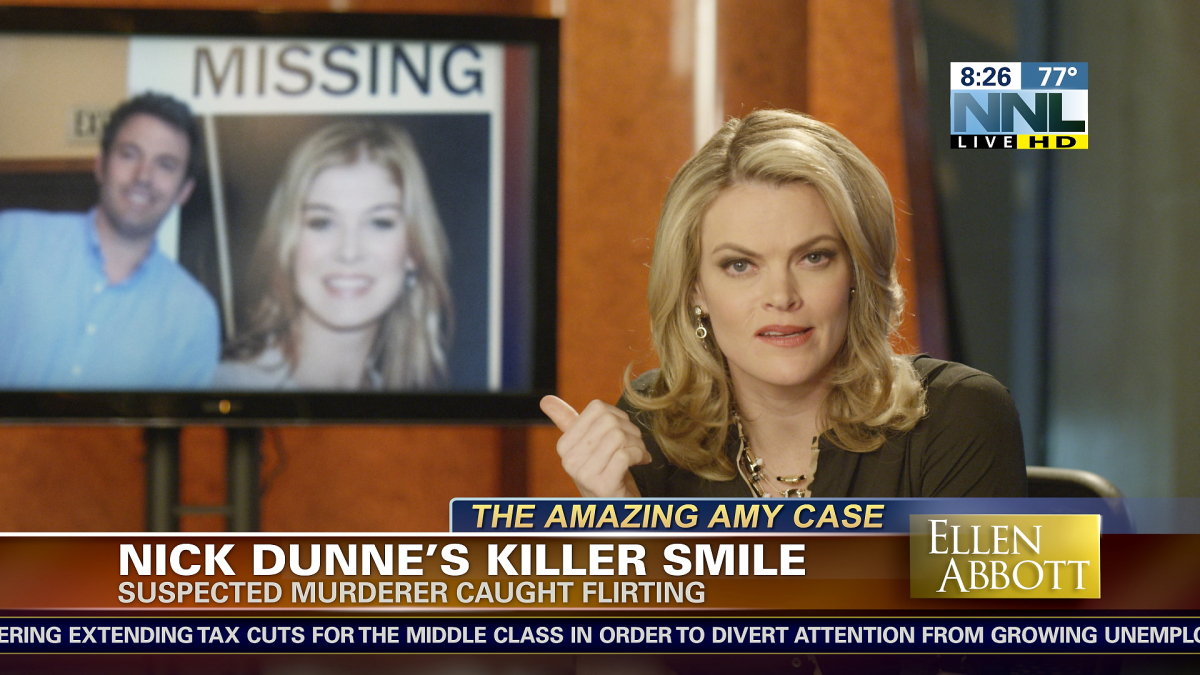 Both actresses — like all the supporting actresses here, found primarily on TV — play big. Their roles are borderline caricatures, only they’re based in the real, because that’s just how bizarre TV news is. Pyle is a kind of roving chorus in the movie, her head cropping up in boxes onscreen to provide maddening commentary. She is a villain simply because she’s such a ravenous dolt. Schieber is more like a vessel for Nick’s transformation and then Amy’s epiphany. But, in just two scenes, you get the impression there’s a whole world inside of Schieber. Ward’s been there before — 20 years ago, she portrayed the late TV news broadcaster Jessica Savitch in the Lifetime movie Almost Golden.1 We detest Pyle’s Abbott until the very last frame of the movie, but Schieber never gets enough time. Rather than end the movie with an Ellen Abbott interview, you wonder what that conversation with the Dunnes might have looked like if Schieber were conducting it.

The rambunctious tempests who spin the movie forward are these three brown-haired women,2 equal parts manipulated and manipulators: a mistress, a dum-dum neighbor, and a crooked survivor. The model, “Blurred Lines” costar, and actress Emily Ratajkowski plays Andie, a pneumatic co-ed with whom Nick has been having an affair. Noelle, the nosy neighbor, is played by (another) TV comic actress, the shrieking Casey Wilson. And the scamming Greta is Lola Kirke, 23-year-old sister to Girls star Jemima, who swivels her hips and snacks on Twizzlers — another kind of Cool Girl in the making. All three women transform, and their importance appears in a way no one expects. They push things into new and devastating ways for Amy and Nick. That Fincher relies on these three relative drama novices for this responsibility says something, though it’s not quite clear what. Maybe it’s a desire to surprise. Maybe he’s just thumbing his nose at the conventions of plot. Or maybe he just gets a kick out of these three women, complex and simple at the same time. Who wouldn’t?

The only blonde other than Pike in the movie is Pyle.