One month ago, Mumford & Sons unofficially launched the promotional campaign for its third album, Wilder Mind, with an appearance on Saturday Night Live. It was a surprising performance for a number of reasons. Immediately apparent was Mumford & Sons’s new fashion sense: Rather than the humble vests and bow ties that previously composed the band members’ onstage attire, the Sons were dressed in black shirts, leather jackets, and tight jeans. The best-selling rock group on the planet no longer resembled early-20th-century newsboys. They now, fittingly, looked like kings — as in Kings of Leon.

Mumford’s “plugged in” phase is the dominant narrative of Wilder Mind, which arrives this week after two records — 2009’s Sigh No More and 2012’s Babel — that collectively sold nearly 6 million copies in the U.S. alone. Unless you’re Taylor Swift, those are highly enviable statistics. For a rock band in 2015, Mumford & Sons’s sales figures are practically science fiction. But Wilder Mind is a calculated break with that past, a record for people who don’t like music that sounds like Mumford & Sons, a constituency that now apparently includes the members of Mumford & Sons.

In the parlance of rock history, “plugged in” is most often associated with Bob Dylan’s historic performance at the 1965 Newport Folk Festival. If you’re not familiar: 50 years ago this July, Dylan decided, on a whim, to perform three songs with a backing band for an audience that expected him to play solo with an acoustic guitar, as was his custom at the time. Naturally, some in the audience reacted negatively and started booing. The reaction rattled Dylan — eyewitnesses later described him as looking dazed after quickly exiting the stage, staring at his shoes in disbelief as hundreds of strangers excoriated him. When he was coaxed back, Dylan played two songs by himself, “Mr. Tambourine Man” and “It’s All Over Now, Baby Blue,” with an acoustic guitar and a borrowed harmonica. Once the festival’s most beloved attraction, Dylan didn’t return to Newport for another 37 years. 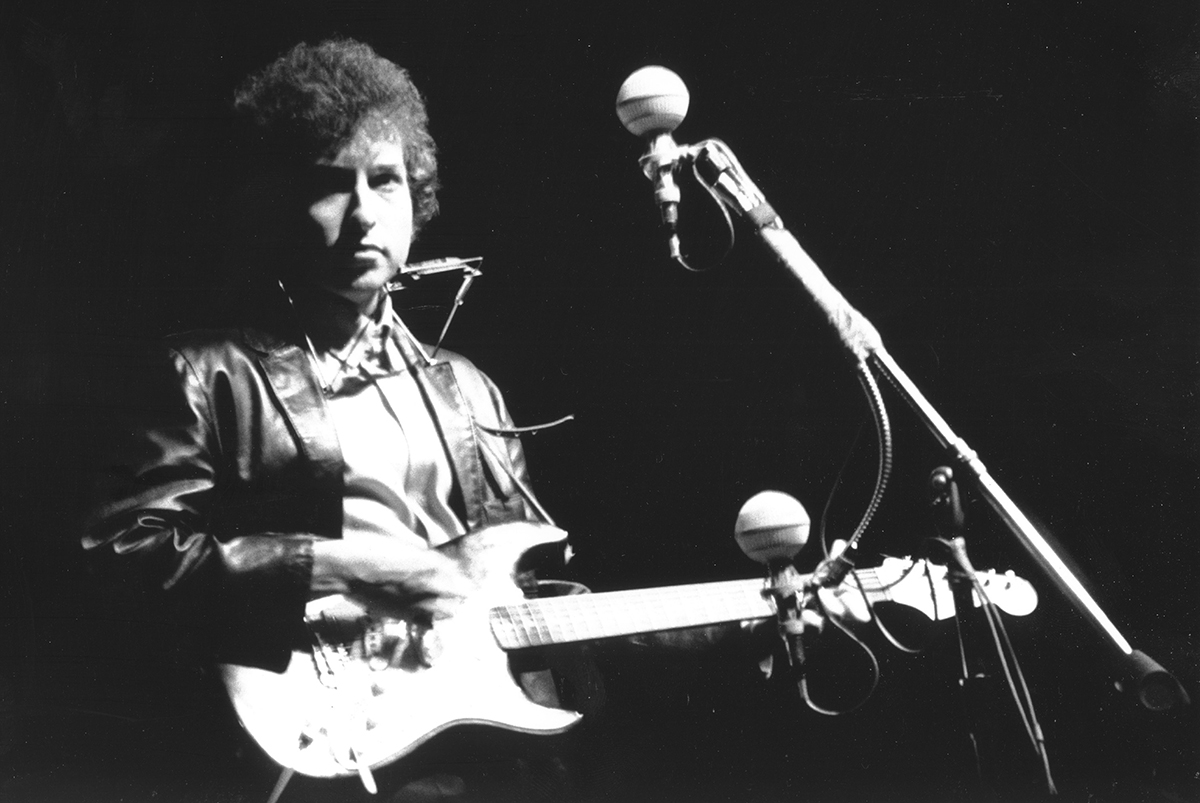 In retrospect, it’s not totally clear why or even whom the crowd was jeering. It’s been theorized that the boos were in response to the poor sound mix and/or the shortness of the set. Some believe that the boos were really directed at Peter Yarrow of the folk group Peter, Paul, and Mary, who introduced Dylan and begged him to return after he played for only 15 minutes.

Nevertheless, it was quickly deduced that Dylan was booed because he played loud rock-and-roll music at a predominantly acoustic folk festival. And this subsequently shaped how Dylan was perceived immediately afterward — fans booed the electric half of Dylan’s concert sets throughout his ’65-’66 world tour, seemingly out of a sense of obligation — and for the rest of his career. “Plugged in” came to signify Dylan’s impulse to challenge his audience by not reproducing a version of his music that people loved.1 For Dylan, plugging in at Newport initiated a series of “plugged in” moments that have marked various incarnations of his career — for example, on his most recent LP, Shadows in the Night, Dylan emulates Frank Sinatra, which makes no sense in 2015 but theoretically will be declared brilliant in 2065.

There’s evidence that Dylan didn’t exactly intend to make a grand gesture in the name of modernity at Newport. According to Howard Sounes’s Down the Highway: The Life of Bob Dylan, Dylan wanted to annoy the legendary folklorist Alan Lomax, who had snidely put down the Paul Butterfield Blues Band the day before Dylan’s concert.

“Plugged in” need not apply only to irreverent folkies. It works as a metaphor for any act of temporarily misunderstood genius that only future generations will fully appreciate, no matter the short-term confusion it causes with a core fan base. Adam Sandler plugged in when he agreed to make Punch-Drunk Love with Paul Thomas Anderson. David Chase plugged in when he cut to black at the end of The Sopranos. Miley Cyrus plugged in at the 2013 MTV Video Music Awards when she twerked up on Robin Thicke. Marshawn Lynch plugged in whenever he silently sulked through a press conference during the 2014-15 NFL season. When plugging in works, the cachet is enormous. It is viewed as one of the noblest of all public gestures — those who long to be called “courageous” for creating an entertainment product will inevitably attempt to pull off a “plugged in” moment.

When plugging in doesn’t work, it can seem like trolling. The closest I’ve come to a “Dylan at Newport” concert experience occurred in 2010, when I saw MGMT on the Congratulations tour. Nobody booed, but the audience’s restlessness was palpable as it endured MGMT’s fitfully compelling psych-rock excursions in the hopes of eventually hearing the radio-friendly hits from the band’s 2007 debut, Oracular Spectacular. Finally, during the encore, the two MGMT dudes reemerged and farted out a half-assed rendition of “Kids” to a prerecorded backing track. It didn’t look like plugging in; it was more like screwing up.

Of course, it’s possible that I’m just one of the naysayers that MGMT might eventually prove wrong. For the audience, a “plugged in” situation can be an opportunity to get in on the ground floor. How amazing is it to be the person who gets it in the moment, even as public displays of consternation roar all around you?

Think for a moment of the most reviled pop-culture events of the last several years: LeBron James’s The Decision, Aaron Sorkin’s The Newsroom, Robin Thicke’s Paula, Johnny Depp’s confounding turn in Mortdecai. What are the chances that today’s critics will be history’s fools? Probably not very high in those instances. But then there’s Lulu, the unlikely collaboration between Lou Reed and Metallica released in 2011 that’s been called one of the most negatively reviewed albums ever. (Our own Chuck Klosterman wrote that “it’s not really designed for people who like music.”) When Reed was inducted into the Rock and Roll Hall of Fame last month, his widow Laurie Anderson claimed in her acceptance speech that David Bowie considers Lulu to be Reed’s masterpiece. Is it possible that Reed and Metallica, unbeknownst to the majority of cognizant individuals who heard Lulu, actually plugged in? Only time will tell.

Dylan at Newport is the most iconic example of a popular artist plugging in, but it’s not the first. Fifty-two years earlier, at Paris’s Theatre des Champs-Elysees, the 1913 premiere of Igor Stravinsky’s revolutionary ballet and orchestral piece The Rite of Spring was greeted with laughter, fistfights, and widespread scandal. Stravinsky’s experiments with dissonance, rhythm, and tonality divided critics, who argued over whether Spring was obtuse and unrefined or innovative and forward-thinking. Over time, the latter opinion won out, and Stravinsky’s decision to “go electric” in a classical context was vindicated. In retrospect, The Rite of Spring is a seminal moment in the rise of modernism during the early 20th century, though for the people who were there it was more like a mosh pit.

Perhaps each generation needs its own “plugged in” archetype. For people who are too young to understand how Bob Dylan playing Bob Dylan songs at a folk festival could possibly be deemed controversial, the modern “plugged in” standard is probably Radiohead’s fourth album, 2000’s Kid A, though the band’s willful turn from arena-sized guitar rock to claustrophobic laptop-bound soundscapes was closer to Stravinsky than to Dylan. For Dylan, playing with a band aligned him with pop music, which is what fueled the ire of folk loyalists. Five days before Newport, he released “Like a Rolling Stone,” still his most successful single, which peaked at no. 2 on the Billboard chart. As recounted by biographer Howard Sounes in 2001’s Down the Highway: The Life of Bob Dylan, Dylan’s attire at Newport was “extraordinarily ostentatious,” with his tight black jeans, black sunglasses, pointed boots, and dandyish black-and-white polka-dot shirt. Like Mumford & Sons, Dylan wanted to look cool after years of affecting the look of a fieldworker.

With Kid A, Radiohead ventured in the opposite direction, away from the mainstream and toward esoteric insularity. The most notable “plugged in” moments of the last decade or so — David O. Russell’s I Heart Huckabees, David Milch and Kem Nunn’s John From Cincinnati,2 Kanye West’s 808s & Heartbreak — follow a similar trajectory, with their creators consciously diverging from approachable humanism to a more alien-like coldness. Under the old model, Spring Breakers might have qualified as Harmony Korine’s “plugged in” move. Now, James Franco’s stint as cohost of the Oscars in 2011 fits the postmodern definition.

It premiered immediately after the last Sopranos episode, making June 10, 2007, one of the great days in plugged-in history. 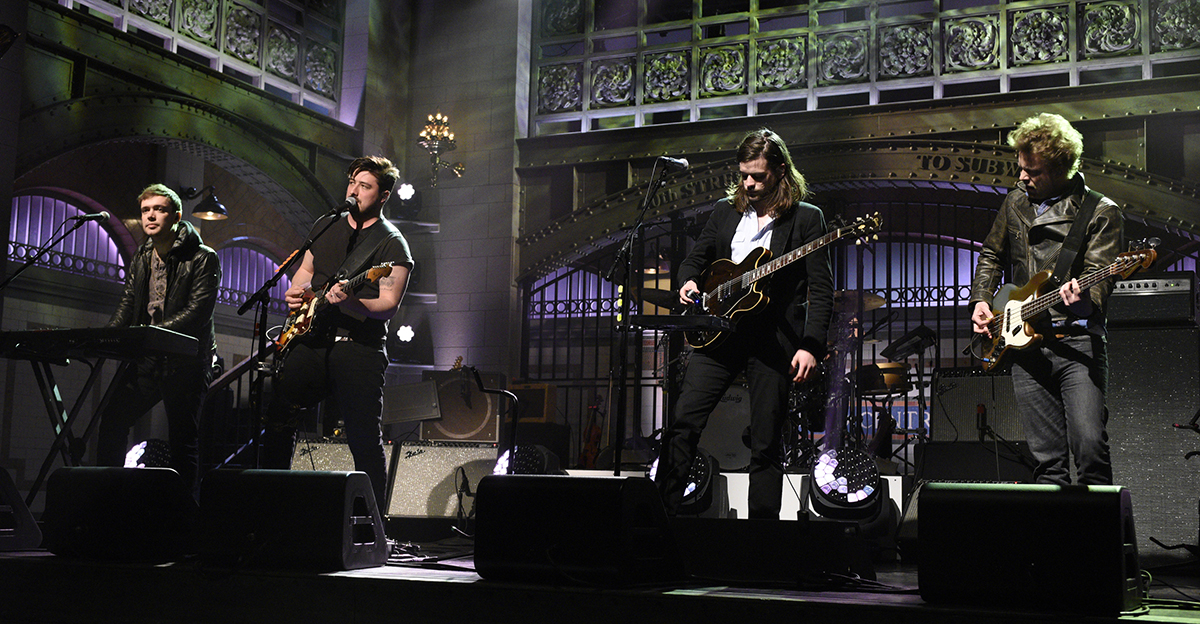 On SNL, Mumford & Sons unquestionably utilized amplification in a manner that can be technically classified as “plugged in.” But is Mumford & Sons truly, you know, plugged in? A generous person could argue that the band’s makeover on Wilder Mind is more radical than was Dylan’s. The latter’s first rock album, 1965’s Bringing It All Back Home, is half acoustic. Mumford & Sons, meanwhile, have aggressively eschewed the secondhand Cracker Barrelisms of their previous, extremely popular records. Winston Marshall, the band’s prodigal banjo player, actually said “fuck the banjo” in an interview during their hiatus in 2014. Sure enough, the banjo is fucked right out of Wilder Mind, which is instead anchored by soft-focus guitars and mood-setting synths, just like a million other mainstream rock records.

This is where even the generous have to back away from putting “radical” within a 10-mile radius of Wilder Mind. Which is not to say that Mumford & Sons haven’t significantly changed up their sound — to the contrary, the way the songs are structured and how they deliver their emotional payoffs is based on an entirely new model. Whereas the dusty, uplifting broadsides of Dylan’s pre-electric period previously informed Mumford’s music, it is now the slow-burn urbanity of the National to which this band aspires. In interviews, Marcus Mumford has admitted to being “obsessed” with the National’s most recent album, 2013’s Trouble Will Find Me, which eventually led to Mumford & Sons collaborating with National guitarist Aaron Dessner and recording at his home studio in Brooklyn. (One of Wilder Mind’s best songs, “Ditmas,” is named after Ditmas Park, which is Dessner’s neighborhood.)

Whether this is an improvement for Mumford & Sons hinges on whether you prefer Al Pacino in Scent of a Woman or The Godfather: Part II. As someone who found the constant stream of overpowering crescendos during the band’s Sigh No More/Babel era wearying, Wilder Mind registers as an upgrade for me. Admittedly, I’m also a fan of Trouble Will Find Me — Mumford’s “Tompkins Square Park,” “The Wolf,” and especially the title track are very enjoyable National knock-offs. No matter the instrumentation, Mumford & Sons has always been a pop band at heart, and adopting a more modern, smoldering sensibility allows the band’s undeniable hooks to simmer without getting overheated. Ultimately, however, internalizing the taunts of their haters has stripped Mumford & Sons of what previously made them unique. Regardless of whether you love or hate those LPs, Sigh No More and Babel are instantly distinguishable as Mumford & Sons. On Wilder Mind, the band’s personality gets tossed out with the banjos. Mumford has plugged in, but also dropped out.