A wise man — a man caught between eras, a man whose pseudo-profound words alleged to reveal deep secrets about the human condition, a man with a taste for booze and cigarettes — once said, “Time is a flat circle.” Those words became a cliché, a punch line, a vortex of meaninglessness swirling in the night sky of the Internet, gaped at by dopes. You’re sick of hearing them and, quite frankly, the very act of typing them feels like a betrayal of the inviolable trust-space we’ve established in these Power Rankings. We’re not here to Rust Cohle you, we promise. This is a Canadian Club bar, chief, no Lone Star on the menu. Just try carving a bottle into a funny little whisky-man without seriously injuring yourself.

But we have to say it: Those words have never rung truer. How else could we have spun back around so quickly to this point with Don? As recently as a week ago, it seemed his marriage had ended and his prospects within a hostile firm were dimmed beyond recognition, no matter how furiously he pounded out burger taglines on that Coronet. But suddenly he’s not only welcome again in Megan’s Laurel Canyon home, she’s inviting a friend into their bed, no big deal, 1969 California’s pretty chill sexually. (We will pause to recognize that is perhaps not the sign of a mending union as much as it is a symptom of ongoing marital dysfunction, your surprise three-way mileage may vary.) He’s catching a lucky break in the form of a Harry Crane–shaped coincidence showing up unexpectedly and offering crucial intel about a Philip Morris–fueled plot to oust him once and for all. He’s marching into a white-tablecloth meeting, sorry to interrupt, gentlemen, but have you considered that maybe the only sane thing for your tobacco concern to do is to hire the man who once attempted to stub out the entire industry with a surgical strike in the New York Times? Bullshit delivered, bullshit received, bullshit marveled at by a stunned nemesis whose only reaction is you magnificent bastard …

So maybe we’ve looped around to a point where we’ve been before: personal life coming back together, professional life saved by a Hail Mary. But we’re nearing the end. This is a setup, because this doesn’t feel like a happy ending kind of guy. There will be more crying jags on wind-whipped Manhattan balconies than stunned emphysema-barons willing to ignore history for a shot at a great campaign. Roger might hand him a blue Tiffany’s box in the last scene, but when Don removes the cotton, he’s not going to see Commander cigarettes inside, he’s going to find a nipple.

Not his own — that would be disgusting.

The friend appears in the doorway. Don loosens his tie, continues getting ready for bed after a long night.

“I’m supposed to tuck you in.”

“And what does your friend say?”

The wife is now also in the doorway. There’s a look in her eye. The glaze of too much.

They advance on him. They’re all sitting on the bed. Clothes are seemingly removing themselves, easing the three of them into action.

“Kiss her. I know you want to,” the wife commands.

“I don’t want anything right now,” he says.

“Don’t lie,” she says, grabbing a handful of the divining rod now pointing in the direction of his untruth.

He kisses his wife’s friend. She kisses him back.

The wife grabs his hand and guides it underneath the friend’s skirt.

But he pulls it back.

“I don’t need your help with that.”

He thrusts his hand toward the friend’s skirt. He misses. His fingers shatter the lava lamp on the end table. He yelps in agony.

“Why didn’t you let me help you?” yells the wife.

“This is kind of a mood killer, to be honest,” says the friend, getting up to find a towel.

“We can try again some other time,” says the friend. “It happens.”

“Thanks, I appreciate that.”

“Maybe we should all just go to bed,” suggests the wife.

“Great. Lou’s gonna be by any minute to tuck me in.”

Don wraps his hand in the towel. The wife turns off the light.

“Never mind. Just something the computer told me. The whirring gets so loud.”

What’s up with this marriage, anyway? Did we collectively imagine “I want you to hail a cab, get on a plane, and go home”? Was there a measure of previously unperceived wiggle room in “This is the way it ends. It’s going to be so much easier for us”? We realize their situation has always been a complicated one, full of nasty fights and carpet-spoiling makeup sex, but how did we get from there to “Oh, hey, my knocked-up fake-niece needs some cash, cut her a check, I’m on the first plane to L.A. That cool?” Seems like Don should probably have also thrown in an explanation about how it’s definitely not his baby, because even though Megan clapped hand to breast and denied ever having such an awful thought when Stephanie preemptively mentioned it, when a beautiful woman shows up on her doorstep bragging that she knows all of her husband’s secrets, it’s going to trigger a certain response. Someone’s going to hand that pregnant interloper a thousand-dollar payoff and hustle her out the door without so much as a plate of spaghetti. And then instigate a three-way, because hey, Drunky Don came home frowny and this relationship is pretty solid, nothing to see here. It apparently survived the thing about hailing the cab and flying the eff back to New York, it can survive consenting adults baked out of their dysfunctional gourds making highly questionable, genital-related decisions together. Hope the hippie does OK with the rug rat up in Oakland — a grand probably buys a pretty nice birthing yurt in whatever park she’s squatting in.

We often discuss Sally Draper in terms of the intrafamilial atrocities we assume she will one day commit as the coolest and most self-assured member of some Mansonesque murder collective. (If you stare at the red star on Megan’s infamous T-shirt long enough and then blink repeatedly at a blank wall, Sally’s blood-streaked face emerges and a coyote wails in the distance. Try it. It works. The wardrobe department on this show is truly next-level.) But at this moment we want to put that aside and celebrate Sally for correctly standing up to her mother’s hysteria and pointing out that the damage to her temporarily imperfect nose was not a life-altering trauma. Call off the abortionist in that barn in Farmington, Betty, Dr. Kramer’s just gonna push her nose back into joint and everything will be fine. She’ll still be able to find a husband important enough to reduce her intellectual life to contemplating toast crumbs in the butter. (Which is some pretty existential shit, when you think about it.)

As for Bobby: He doesn’t pee the bed anymore. That’s worth something. That’s worth quite a bit. All growns up, bladderwise. Until the next time Henry yells at Mommy; then it’s back to throwing wet sheets out the window in the middle of the night and waking up in the morning to find out you’ve been replaced by a newer, drier clone.

Well, that got dark fast, didn’t it? Runaway-lawnmower fast, Lane Pryce fast. One minute, Ginsberg’s paranoid ramblings about the imminent computer takeover sound just as quaint as his crusade to liberate a fart-free couch from the clutches of his punch card–gobbling oppressors, and the next he’s being wheeled out on a stretcher because he professed his love in severed-nipple form. We suppose poor Michael will never know what Jim Cutler and Lou Avery were discussing behind the soundproof glass of the mainframe room, but they almost certainly weren’t giving instructions on how to surgically excise malfunctioning data valves from the human torso. It was probably just boring, run-of-the-mill, cigarette-related treachery. Maybe a little bit about Cutler’s new ascot. The computers told him to try out that look. And they weren’t wrong.

The worst part of it wasn’t calling the ambulance, or watching her straitjacketed friend be escorted from the building by paramedics. It was returning to her office to find that Stan had left a dozen roses and a jewelry box full of pepperoni slices on her desk. He never knows when it’s too soon for tasteless gags.

7. The Faint Glimmer of Hope From Learning Bob Benson’s Other Show Was Canceled, Perhaps Freeing Him Up to Be Hastily CGI’d Into the Backgrounds of Scenes for the Remainder of the Final Season (last week: 6) 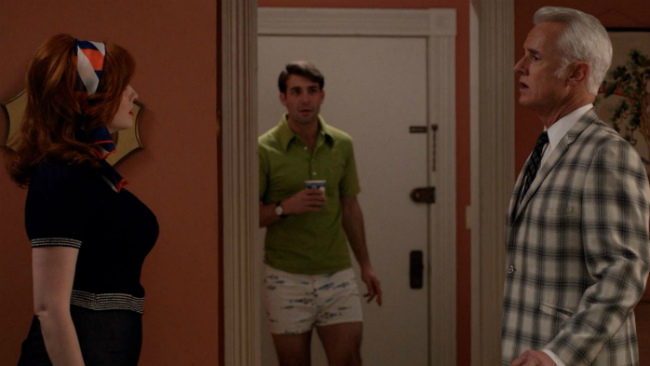 A faint, faint glimmer. But not impossible. Dare to dream, BensonWatchers, and remember that he spent approximately 80 percent of last season’s screen time lurking on staircases outside conference rooms, eavesdropping on meaningful conversations, and ghosting through the labyrinthine halls of SCDP. Digital Bob Benson — Accounts, Beloit.com, Wharton School of E-commerce — could be back, coffees in hand, to idle outside Don’s office, his puppy-dog eyes wordlessly expressing how bad he feels about the way Don’s been treated by the other partners. Bob Benson can say a lot with a look and two cups of French roast. He can say everything.

And all it takes is a green screen and a dream. And maybe 10,000 pairs of tight swim trunks mailed to Matthew Weiner’s house. He’s got to learn we won’t be ignored. We killed off The Crazy Ones. We won’t be trifled with, Matt.

“You think this is going to save you, don’t you?” Cutler sneers at Don as his cab begins to pull away. “Did you see the way I wore that ascot earlier? That is the fashion choice of a burgeoning supervillain. You don’t want to fuck with a supervillain in an ascot, friend. Especially when you’re standing there in a brown suit and gray fedora. Free advice.”

We’ve seen Pete champion his adopted city, and he’s certainly made the adjustment more smoothly than the broken man in the office next to him, whose intermittent sobbing really shades the unrelenting sunshine. But no one from Sterling Cooper Draper Pryce “gets” Los Angeles like Harry, who takes to the place like a douchebag duck to coconut water. “I’m helping Miranda find an agent,” he says, entering a random party he hopes will be stocked with industry types. Of course you are, Harry. Of course you are.