And with those two letters — exhaled with the unshakable confidence of a man who knows he’s getting exactly what he wants, having successfully used the resistance-melting timbre of his voice to manipulate everyone in the room into offering his preferred deal points — we feel confident in announcing:

Of course, the last words he actually registered may have been “We’d like you to come back to work,” before he mentally retreated to the happy-misery-place of his old office, where he downed three fingers of bourbon, grabbed an armload of Lou Avery’s cardigans to toss from the window, and watched with delight as they fluttered toward the Madison Avenue throng like wounded cashmere pigeons. Maybe the terms Bert Cooper laid out with a barely concealed mix of disgust and relish, perhaps hoping Don’s pride might goad him into a favorable termination settlement, passed by between the dots in an ellipsis of inattention, so relieved was Don to feel wanted again, by someone, anyone. Even if maybe they didn’t want him back at all, if behind closed doors his name was shouted and decried and accepted as a contractual inevitability. The freshly dumped Don had already seen the only thing more depressing than his life: his life without his job. “We’d like you to come back to work” had to sound like “Good news! Now you don’t have to choke to death on the jagged shards of stale Ritz that lodged in your throat from laughing too hard at Spanky and Buckwheat, unless you really want to.”

And so “OK” became a victory. A rebirth. (Albeit into a lower caste; hey, karma’s a bitch.) Don’s probably just hoping that his new office doesn’t come with late-afternoon visitations by a purple-faced ex-coworker swinging from a noose, cradling a ghost-cobra in a phantom basket. He doesn’t need another reminder of what a worst-case-scenario separation from the firm looks like.

They’d like to have him back. That is understood. So the hands are in plain sight, a show of good faith.

“But there are some stipulations,” Bert says, more a hiss than a statement. He slides a paper toward Don. The others look on, trying to read Don’s face, but he gives them nothing. He listens.

“You can’t be alone with clients,” says someone.

“You must stick to the script in meetings. And that means the script will be approved by the people in this room,” says another.

Don nods. The hands remain on the table, still like stone.

“Outside of client hospitality, there will be no drinking in the office.”

He does not flinch. He won’t give them the satisfaction.

“You will report to Lou.”

Don looks around the table. He sees on their icy faces that there’s an “and” coming. He waits for it.

Bert and Jim rise from their chairs, flanking him.

Cutler rests a hand on Don’s wrist. It suddenly tightens around his cuff.

Don nods. This will be the price he pays.

The hatchet crashes down.

And Don awakes with a start. Back home. In front of the television.

His right hand buried deep in a box of Ritz crackers.

He withdraws the hand, counts the fingers. They wiggle back at him.

But maybe not for long.

It was a relief to see Roger behind that door instead of the too-eager woman from the Algonquin, because what does she think this is, Season 2, where every Don Draper encounter carried the imminent threat of a coat-check quickie, a powder-room plowing? Wait your turn, lady, there are a couple of guys in $100 suits (1969 currency) putting in bids on the damaged goods first. Besides, Don’s got to see what’s in that envelope before he’s checking out what’s in Top-Floor Room Next to the Elevator No. 2.

But Don took that envelope straight to Roger, and the old friends got to finally clear the air over how his leave-slash-firing went down. “I started that company; I had to talk you into it!” yells Don, plopping his manhood onto a nearby end table. “I found you at the bottom of a fur box!” answers Roger, pulling back his robe and joining the dick-measuring contest in a single motion. (Luckily, none of Rog’s playmates were afoot, or the confrontation might have quickly veered into an LSD-enhanced, hippie-shattering orgy.) In the end, Don wanted back in, and Roger wanted him back, even if he was too afraid to tell the partners about his plan. Sterling missed him. Or maybe he just missed the way things used to be, when he could return from a 10-martini lunch, puke in the stairwell, and count on Don to mix up a post-peristaltic Alka-Seltzer. The time before Jim Cutler, before too-crowded, bickering-filled partners meetings. Before the Hershey meltdown.

We can’t yet know if Megan’s going to follow through and become the second inductee into the Don Draper Ex-Wives Club (you get a house, a generous settlement, and a collectible Dick Whitman Box of Secrets with your membership), but “I want you to hail a cab, get on a plane, and go home” doesn’t sound like the poetry of reconciliation. Nor does “This is the way it ends.” Funny how that goes, and how “I’m not even drinking that much!” fails as a selling point, especially when your spouse realizes your lies were semi-clearheaded ones as you surrender the usual whiskey fog as an excuse. Things haven’t been easy out there on the West Coast, definitely not Pete Campbell–easy, with days full of rejection, botched auditions, and actresses-be-crazy stalking behavior. (Can’t Pete take her to Canter’s now and again to drown their estrangement-related sorrows in adequate pastrami? Every bite erases another piece of Trudy from the dog-eared wedding photograph in his mind.)

Megan begs Don to stop pushing her away with both hands. And for now, at least, she won’t let him get close enough for yet another shove. She’ll stay in Hollywood, filling her days with “accidental” producer run-ins at the Brentwood Country Mart. And he’ll remain back in New York, wondering why she wasn’t more excited he got his job back.

Isn’t there a little part of all of us that wants to side with Betty Francis, Supermom? Wasn’t it great how she volunteered to chaperone the trip to Pappy Cyrus’s Potato Farm, and then didn’t just stand by, smoking and trading jokes about Ms. Keyser’s cleavage, but actually gulped down a warm bucket of straight-from-the-udder cow-juice? There’s a version of Betty that never would have bothered, that would have stayed home, trading shots of straight-from-the-can Reddi-wip with her latex-entombed dark passenger. She’s at least making an effort now.

And sometimes that effort ends when your idiot kid trades your lunch for a bag of fucking gumdrops. There’s a reason she got rid of the first four Bobbys. No respect whatsoever for Mommy’s property. Who did the brat think that second sandwich was for? Why do kids ruin everything? Mommy needs a cigarette.

“Remains to be seen.”

“That’s what the flowers are for.”

[Peggy grabs a vase of roses off a nearby desk, shatters it on the ground, storms off.]

Look, Harry’s always been way ahead of his time. Maybe he couldn’t know the specifics, but he could still sense there would come a day in his lifetime when the distinction between “our computer” and “their computer” would become essentially meaningless. In 1969, he’s the most dishonest man Jim Cutler’s ever worked with. But in 2014, he’s the visionary who invented cloud computing in a routine client meeting. Just think of all the incredible technological progress he could have made if just one of those ignored Christmas wishes for a computer had been granted.

7. The Sickening Realization That Bob Benson Might Be Killed in an Offscreen Detroit Car Crash Before We Ever Get to See Him Again (last week: 8) 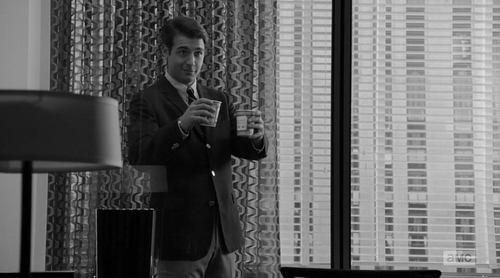 “Bob Benson. Beloit. Wharton. Accounts. Chevy. Dead man. It was a lovely service. The funeral home did what it could with what they recovered from the wreckage of the Chevelle — hell of a car, by the way, the Cadillac of midsize coupes — but in the end, they had to go with two closed caskets. You don’t want folks going home sick to their stomachs. Really wish I could have made it back to the office to see Don, or even out to L.A. to see Pete, but I guess it wasn’t meant to be. Oh, well. I’m in hell, did I mention that? Just how things worked out. It’s weird, the coffee’s kind of cold here. And you only get one.”

It’s hard not to admire a real go-getter like this guy. He’s no burnt-out, directionless mope, sitting around his apartment in the dark, ticking off the days until his slow death from alcoholism and despair right on the side of the bottle, with only a cockroach named Sam for company. Enough dancing around, Clarence Birdseye says, let’s get dinner. Let’s hit the Algonquin and exchange envelopes with salary figures in them and joke about the strange coyness of it all. Let’s get propositioned right in the middle of important business meals by women who are definitely not hookers and laugh about what a great recruiting tactic that would have been if anyone had thought of it. Let’s get another drink, Birdseye says, before he opens that envelope, which he’s going to take right back to his old firm, because hot damn, that cockroach never washes the dishes, like ever, and the secretary’s getting too busy to roll calls to his soon-to-be-ex-wife’s agent from home. Let’s get a deal done, Clarence says. Let’s get to “OK” and go from there.

“Freeze-frame. All is still, the world frozen in a perfect moment. A moment of freedom, a moment of power. A moment that smells like forever. Our stallion, the most magnificent beast you’ve ever seen, mane flowing like black fire, hoofs winged in smoke as if to take flight, gallops through the background. Through time itself. Childhood, adulthood. Birth, death. Eternity. The bottle appears in a plume of black flames. The announcer, maybe Charlton Heston, maybe the voice of God Himself if He’s available, booms: ‘CHEVALIER NOIR.’”

“We really didn’t miss you.”