Previously, on Justified: Boyd rediscovered, in wholehearted fashion, just what it is that makes Boyd Boyd; Art got shot before the opening credits, which we actually forgot about for a minute, so gogglifying was the Boyd/Picker showdown.

This week: Raylan tries to starve out Daryl (heeeeeey) by locking down the local criminal element, which is as good an excuse as any to let all our favorite villains and law-types mingle about.

How to Never Leave Harlan Alive

When Wynn Duffy returned to the screen after a midseason absence, we rejoiced at the notion of Boyd’s wobbly drug ring getting under the thumb of some adult got-damn supervision. But in the opening scene of “Starvation,” Duffy’s composure has deserted him; he’s trying to convince Ruiz he murdered Boyd in a way we don’t usually see Duffy have to try anything. And that’s before the threats of skinning start. Duffy sets out to find Daryl at Ruiz’s behest, and the first dominoes, carved from solid heroin, begin to fall. (Are heroin dominoes molecularly possible? We’re not scientists.) From there:

• Duffy recalls Boyd to help him find Daryl — and because Duffy can’t get to the drugs if Boyd dies. (Isn’t it nice how Boyd and Duffy deal with each other with something dangerously close to honesty?) Daryl learns where that ever-vanishing supply of remaining heroin is stashed, thanks to violently interrogating Mikey, Carl, and Caleb (Christ almighty, poor Caleb).

• The Three Marshalteers show up at Duffy’s hunting Daryl, and to impound the RV and make white-collar threats in Duffy’s direction.

• In his pursuit of all possible avenues to Daryl, Raylan goes so far as to threaten Ava when she tells him she can’t and won’t lean on Boyd to help expose the Crowes.

• Boyd plots to pit “the marshals and the Mexicans” against one another at the scene of the stash, but when he turns up at the courthouse to lure Raylan and friends to the heroin barn, Rachel tells Boyd he has to come along. There are a host of great reaction shots in this hour, but Walton Goggins’s frayed, almost cross-eyed, borderline hysterical smile when Rachel makes that condition is worth bronzing.

• Daryl, by turns solicitous and sadistic, sends Wendy to retrieve the heroin in his place, and the marshals promptly pluck her up. With the operation blown, Raylan tells Boyd the only remaining way out is to wear a wire and get Daryl to confess to shooting Art. Boyd, mid-protest, sees Ruiz drive by and locks eyes: “I’ll wear a wire.”

• The whole gang convenes at Audrey’s, with Daryl and Boyd inside, the marshals listening in from a nearby van, and Dewey turning up for one last stand. Dewey being Dewey, he winds up inadvertently taking his turn being arrested in Daryl’s stead.

• Ava, prideful in her fudge-and-strawberry-swirled ice cream cup queendom, watches her minions fend off a belligerently telegraphed attack by Gretchen and her Nazi enthusiasts, but Judith’s congregation isn’t vigilant enough to keep one of Gretchen’s brood from stabbing Penny to death in the bathroom. Gretchen also helpfully exposits that she’s after Ava’s business and out for revenge after what Boyd did to Gretchen’s brother on Ava’s behalf. Ava, being super double dead no matter how she looks at it, tries to cave in to Raylan, but she’s too late to cut a deal.

• Beknownst to Boyd, Raylan intends to pursue every piddly charge he can muster against him, out of what we’ll legally call “spite.” Unbeknownst to Boyd, the Ruiz crew has found Boyd’s bar hideout, and has its hands on Jimmy.

• And Boyd has one last desperation heave to try: bringing up Raylan’s connection to Nicky Augustine’s murder in front of Tim and Rachel. The other marshals cover for Raylan so smoothly, and Boyd gives up so quickly, that it’s time to be concerned there’s one last nasty bird coming home to roost for Raylan, a full season after the action itself.

• If he even lives that long. Vasquez declares to the Crowes his agenda to have Kendal tried as an adult, and Raylan takes responsibility in front of the family in an overt attempt to draw Daryl to him, as Tim says, “out in the wild world.”

First runner-up: Jimmy. There’s a Value Over Replacement Henchbilly joke here that we don’t have the baseball acumen to make, but how crucial has Jimmy been this season? How handy in how many tough situations? So much potential’s about to wink out here.

Winner by unanimous decision: Caleb. You all remember Caleb. The new bartender at Johnny’s — hog-tied and deafened by the Harrises in “Wrong Roads,” and now shot by Daryl — followed up his “WHAT THE HELL KIND OF PLACE IS THIS??” cri de coeur with “THIS IS THE WORST JOB IN THE WORLD” in this episode. Sweet Caleb, the Greek chorus of Season 5, we thank you for the guffaws you have given and for the bulwark those laughs have provided against the rising tide of heartbreak, and wish you well in your future endeavors. Seriously, Caleb, run, and don’t you dare look back. 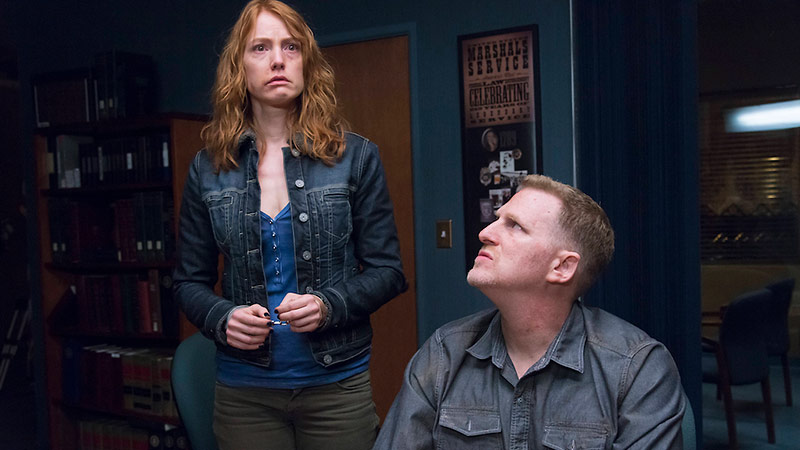 One episode remains. Raylan’s in a corner. Boyd’s in a corner. Ava’s in a corner. Now Wendy is, too, playing out the final act of this ghoulish Peter Pan fantasy with her brother. Everybody’s exhausted and thisclose to ruination. Everyone’s life is ALREADY a goddamn calamity. Boyd’s luck isn’t back. Raylan looks like he’s about a centimeter from gruff tears squeezing out. Ava’s calcifying behind bars and facing another impossible survival scenario. Everybody’s lashing out. The Crowder-Givens threats are some of most substantial they’ve ever exchanged, but they’re made by fighters weaving on their feet, with fatigue and despair muting their anger. We are starting to wonder just how many people can be arrested or killed outright over the same batch of heroin in this time frame. It has proven endlessly useful. Tune in!

Did the little lord Crowder find time for a haircut in the 24 hours between capers? Or maybe his head looks smaller? Perilously close to extinct, m’man.

4. “Must be a new cartel fad to jazz up the tedium of beheadings.”

6. “Career shitbirds always want the sun, the moon, and the goddamn stars.”

7. “Having the name means not having to act on it all the time.”

8. “Cases like this, we make Daryl’s life and the life of everyone around him a goddamn calamity.”

9. “You’re right. They already put her in the morgue.”

We do not much like hearing Daryl talk, but he does bring up a great point with his pig roast comment, which is: What does exploded human meat smell like? Did anybody inhale any of Picker’s mist? Is Daryl’s request for apple juice foreshadowing a courtroom attempt to blame all his murderous antics on low blood sugar? Where has Katherine gotten off to in all this aftermath? Why doesn’t Raylan tell Ava that Art’s been shot? And now does Raylan have somebody else to ride out for? This is at least the third time in two episodes that somebody’s said Raylan killed Danny and nobody’s corrected that falsehood. Why? Is there a worse threat than Dewey threatening to kill somebody the way he killed Messer? Have you noticed that Justified doesn’t really do seasonality? You think Wynn’s missing a major tennis tournament, and that’s why he’s really upset about losing the RV? What did Tim and Rachel think of Gravity?