On Sunday night at the American Music Awards, Iggy Azalea struck an uncommon pose: a towering white woman onstage thanking a diminutive black man who believed in her, had given her an opportunity, and provided her the credibility to penetrate an unforgiving community. Her provider, the rapper T.I., awkwardly pinched Azalea’s shoulder as she spoke, a wide and huckster-y grin etched onto his face, reaching up to evince some measure of pride and ownership. And with Azalea’s victory — over genre megastars Drake and Eminem — a loop closed. The blondes won. But they couldn’t have done it alone. 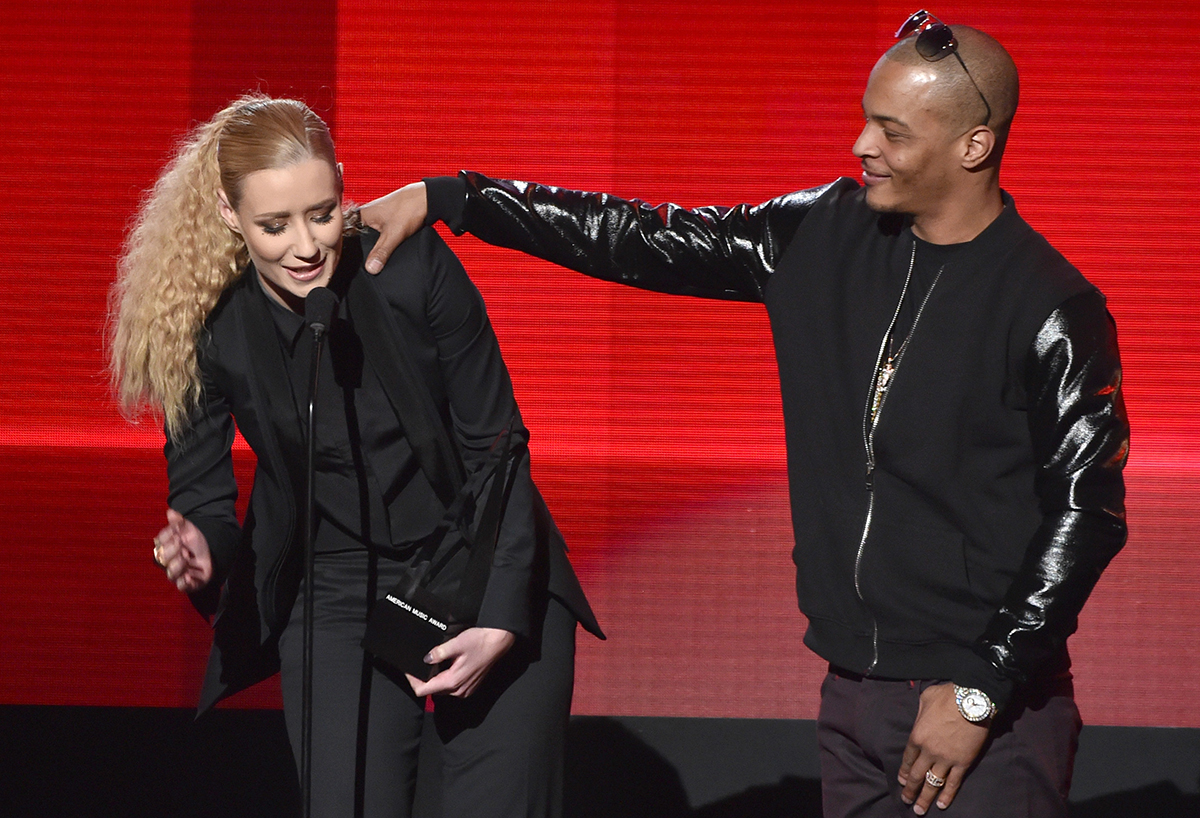 The American Music Awards are a fan engine for maniacal children — a chart-driven event meant to rile fans and confuse the aging. Sharply cut, tall, and crystalline pyramids, the awards themselves are meaningless — paperweights for paper collectors. Azalea actually won two of them on Sunday — for Favorite Artist in Rap/Hip-Hop and Favorite Album in Rap/Hip-Hop, to boot — and both times, T.I. accompanied her to the stage, projecting equal parts Colonel Tom Parker and Phil Spector. For the better part of two years, T.I. has faithfully toted Azalea around, from radio station appearances to industry showcases, from sold-out concerts to magazine photo shoots. He has been the paterfamilias and the protector — an encouraging force when all of those eyes observed his protégée’s shape but rarely her voice. His commitment has paid off. Iggy Azalea has become the single biggest new star in music this year, and the first quantifiable breakout white female rapper in the history of the genre. Unlike Gwen Stefani, or Fergie, or the flaxen-come-lately Meghan Trainor — interloping white women who rap, but not in the catholic sense — Azalea is resolutely committed to the genre. Iggy Azalea means a lot to rap, and rap means everything to her. What lives between those two things is murkier and a little depressing.

Azalea’s story has been told before, but the beats have a seriocomic Horatio Alger quality, so let’s go again: wide-eyed Australian teenager emigrates to this country, ignores parents’ pleas to return, roves the American South inhaling culture and flow, catches on with outer-ring members of rap royalty, contorts accent, slowly earns acceptance, and then hate, and then success. But though her place in mainstream culture is now confirmed — “Fancy” is among the year’s biggest hits, and she currently appears on three songs on the Billboard Hot 100 — Iggy Azalea isn’t exactly respected inside rap. More like acknowledged, and occasionally thanked for providing new revenue streams.

But her puncturing of the culture is not as obvious as it seems. Azalea’s rose garden path to fame has been fertilized by the rotting corpses of white female rap not-quites — from Icy Blu to Misa, Tairrie B to Princess Superstar, Yeastie Girlz to Northern State, Lady Sovereign to Uffie, Kreayshawn to Kitty Pryde. For 30 years, the music business has churned for Iggy Azalea, seeking a savior where one did not exist, or was not allowed to. Being blonde and beautiful meant nothing. In fact, it was made to seem like a roadblock. Twelve years ago, Spin magazine published a story called “Not Bad for a White Girl” about this stalled quest. G. Beato’s piece reads like a shame spiral, with several women prostrating themselves before an arrogant industry, and that industry’s power brokers yawning at the absence of a viable “Feminem.”

Iggy Azalea — born Amethyst Amelia Kelly1 — is no Feminem. She has little in common with Marshall Mathers, save his origins as a lowly battle rapper cosigned by the late local hero Proof. Where Eminem is defined by the grimness and frustrations of squelched masculinity, Azalea is a feminine object of resilience. Azalea is tall and blonde and stiff-backed — she resembles a slightly oblong piece of chalk. She’s a model who fulfills perceived standards of beauty, and her affect — a kind of dead-eyed doll meets Amazonian awkward teen — makes her strangely likable, if distant. Sometimes you’ll detect a little neediness to offset the high-toned glamour. Her rapping is despised by purists, because it is inauthentically rugged and not at all Australian. Azalea raps like so many black men who have come before — the same inflections, the same harrumph, the same phraseology — that she takes style from a native form to a pose to a burlesque and all the way back to something familiar. It’s a strange conflation, like an aspiring writer spinning derivative Philip Roth tics into a crowd-pleasing novel. Some have argued Azalea’s chameleonic vacancy is not just a learned pose, but a purposeful strategy. “Because her lyrics tend to be generic, with only small flashes of insight, humor, and dexterous wordplay,” Gawker’s Rich Juzwiak wrote earlier this year, “she’s not asserting her command by investing in these personas. Instead, she’s trying them on, showing you how sickening she can be, no matter the look. She’s every woman, or, at least, every woman she wants to be.” There’s an active fakery in Azalea, and a beautiful paradox in the opening lyric of “Fancy”: “First thing’s first: I’m the realest.”2 She isn’t, and that never matters. Later, she raps, “Rooftop, like we bringin’ ’88 back.” Azalea was born in 1990.

“Before too long, she’ll probably have her own version of ‘Starships,’ too,” Emma Carmichael wrote of Azalea in a 2012 profile. She was right.

Azalea grumbles this on the new song “We in This Bitch.” It’s a good question that we’ll never be able to ask again. This week, she releases Reclassified, a modified version of her debut full-length from earlier this year, The New Classic.3 Reclassified, it seems, is meant to correct some of that album’s sins, stripping it to down to 12 tracks, keeping six in place (the hits, mostly) and adding more potential singles. Gone is the antic “Fuck Love,” replaced by the leering “Beg for It.” Reclassified is a cash-in, a rebranding, and a do-over all at once. She’s doing it with a little help from her friends. Azalea almost always seeks help on her biggest songs: the irrepressible Charli XCX on “Fancy”; Rita Ora on her hit “Black Widow”; Jennifer Hudson on the gospel freakout “Trouble.” Azalea also absorbs the power a guest verse on a pop hit can provide, as on Jennifer Lopez’s “Booty (Remix)” and Ariana Grande’s “Problem” — she’s the beneficiary of accessibility and the supplier of rap credibility, a punchier counterpoint.

Let’s do that again: She named her first album The New Classic.

Azalea has a history of seeking collaborators, guides, and gurus — first she fell under the spell of Dungeon Family’s Backbone and the Atlanta impresario Big Oomp, and learned to carve lolling syllables and drawling punch lines into her patterns. After she moved to L.A., she weaved a Compton roll into her schemes. She tried out trap and EDM with Diplo and Steve Aoki, but didn’t like the fit. She fell in with T.I. and Grand Hustle, and began rapping about “Murda Bizness,” arriving at a stylistic stasis. On “Work,” she split the difference: strip-club anthemics (the video), girl-power braggadocio (“Walk a mile in these Louboutins”). She presents her hard-luck tale like nearly every commercially successful rapper who’s come before her, man or woman. “No money, no family / Sixteen in the middle of Miami,” she tolls over and over on “Work.” This is a construct of her own circumstances translating her story into a woe-sacrifice-success story. She is the user here, the woman seizing control of her narrative with the album she’s spent her whole career preparing for.

Though she’s been used, too. By T.I. to buoy his flagging relevance. By Eminem, once again flailing in his basement for attention. And by rap at large, always desperate for more flesh. Azalea’s rise comes at an unusual time. Female rappers — shunted aside for all those decades — are the dominant figures of the genre in 2014. Absent an album from one of the genre’s megastars, six songs of the top 10 on Billboard’s Hot Rap Songs chart are female-fronted, including two from Azalea and even one from Fergie. The rising Dej Loaf is nothing like either of them, nor does she resemble the reigning colossus of blink-bot rap, Nicki Minaj. There is diversity, even in this moment of diversity. Iggy Azalea’s rise was never promised, but it is perfectly timed.

That men are using these artists is no surprise, and it complicates Azalea’s agency in ways even her Brisbane-by-way-of-Buckhead rhyming cannot obscure. Tairrie B, the onetime pupil of Eazy-E, was similarly presented and compromised, when the members of N.W.A treated her like a worthless rag doll, insulting her and writing self-flagellating lyrics for her to rap. Tairrie B resisted, and in an unconfirmed version of this story, was assaulted by Dr. Dre for her gumption. She was eventually released from Ruthless Records. That was 25 years ago. Not many people have heard of Tairrie B. This is a different kind of negotiation, where rap is more slick and aged, a little more well prepared to launch a career if its gears are set properly. Azalea is the beneficiary of Tairrie B’s struggle, of the dozen women Beato profiled before they disappeared into the unsigned ether.

Last month, I sat beside my 11-year-old sister at a wedding. She snatched my iPhone from my hands, asked me to unlock my pass code, and quickly began scrolling through the music in my library.

“Why don’t you have Iggy Azalea?” she asked.

As recently as January, my sister could not be bothered with music that didn’t begin with “ONE” and end in “DIRECTION.” In a small span of time, she effectively ditched Harry Styles in favor of “Fancy.” In that same period of time, Azalea has transcended her own talent. She’s in the conversation, if not permanently, then at least forever. What’s a world with no I-G-G in this bitch? No world at all.