Every February, Oscar prognostication becomes a cottage industry. Scores of experts parse the viability of each nominee, creating a multitude of narratives that keep the entertainment media churning during an otherwise slow part of the year. And the public eats it up. We make sure to see the nominated films, we argue among ourselves about who deserves to win, we set up office pools to make the telecasts a little more interesting, and we dutifully sit through all of the technical awards to find out if we guessed correctly.

Then there’s the Grammys, which also take place in February (this Sunday, to be exact). Here’s a proposition for your office pool: The first person who can name all of the nominees for Album of the Year gets $1 million. Don’t worry about paying out — unless you work at a music website, you likely won’t have any correct guesses.

The Grammys simply don’t register as a national obsession like the Oscars do. Few people outside of the record business have ever based their opinions about the greatness of musicians on whether they’ve won a Grammy. I quote Eddie Vedder: “I don’t know what this means. I don’t think it means anything.” He said that in 1996, after Pearl Jam won Best Hard Rock Performance for “Spin the Black Circle.” Later that evening, Seal won Record of the Year for “Kiss From a Rose,” inadvertently proving Vedder’s point.

That is not to say that people don’t care about the Grammys as a television show. On the contrary, the Grammys have enjoyed a ratings surge in recent years: After peaking in 2012 with 39.91 million viewers — a figure often attributed to the show airing one day after Whitney Houston’s death — the Grammys held strong with 28.38 million in 2013 and 28.51 million last year. 2012 and 2014 are the two highest-rated Grammy telecasts since 1993.

The Grammys are also a major event in social media: Last year, there were 13.77 million tweets during the Grammys, which was actually more than the Oscars at 11.16 million, according to a Nielsen report. Twitter is ideal for events that are live, a little stupid, and prone to provoking outrage, so it’s no surprise that it works so well for the Grammys. The Grammys are like the Super Bowl, Sharknado, and a poorly worded New York Times op-ed rolled into one. It’s a perfect storm for hate-watchers.

With that in mind, I’ve made my predictions for the top three categories based on what I expect will play well in social media, and then who I think will actually win. And, to enliven the process, I’ve set aside $1,000 in imaginary money that I’m distributing across three bets based on my confidence level for my picks. Because if you can’t put your fake money where your keyboard-tapping piehole is, you might as well keep your fingers … shut? Sorry, my metaphor has fizzled like the second volume of The 20/20 Experience.1 Let’s proceed.

I’m still a little surprised that neither of the 20/20 Experience LPs were nominated for Album of the Year, given Justin Timberlake’s standing in the industry. Perhaps this was a rare instance of the Grammys showing good taste.

URL winner: In 1981, the National Science Foundation created the Computer Science Network, or CSNET, which proved to be a milestone in the development of what we now know as the Internet, popularizing the burgeoning web among academics and researchers. Also in 1981, Mathew and Tina Knowles created Beyoncé, who proved vital in popularizing the Internet among everyone else.

A Beyoncé live performance on an award show is always a big deal in social media, prompting a Bey-gasm of tweets that increase in speed and emotional intensity over the course of four or five minutes until they culminate in guttural, hastily typed word noises. (“OMG,” “ZOMG,” “OMFG,” etc.) But Beyoncé isn’t performing live at the Grammys this year. The best we can hope for in the way of Beyoncé face time is a memorable reaction shot, perhaps a look of mild disdain at the prospect of sitting through an Adam Levine–Gwen Stefani duet. The Grammys should not be reduced to being a promo for The Voice, amirite, B? Anyway, I would happily RT that GIF.

Otherwise, it all comes down to whether Beyoncé wins Album of the Year. Frankly, I worry about the future of our society if Beyoncé doesn’t win on Sunday. If they remade Fight Club in 2015, it would end not with the nation’s financial institutions being demolished but with Beyoncé’s façade of invincibility being tarnished by her beloved self-titled LP not winning Album of the Year. Will we be able to withstand this blow to our way of life? How will this affect our hashtags? (#FLAWED? #BOWDOWNHAHAPSYCH?) I have a feeling we’re about to find out.

IRL winner: I’m basing my prediction strictly on who had the most popular album, which admittedly isn’t a bulletproof standard. The best-selling nominated album in 2014 was In the Lonely Hour; the most streamed album on Spotify was X. Between Smith and Sheeran, I’m putting my fake money on Smith. 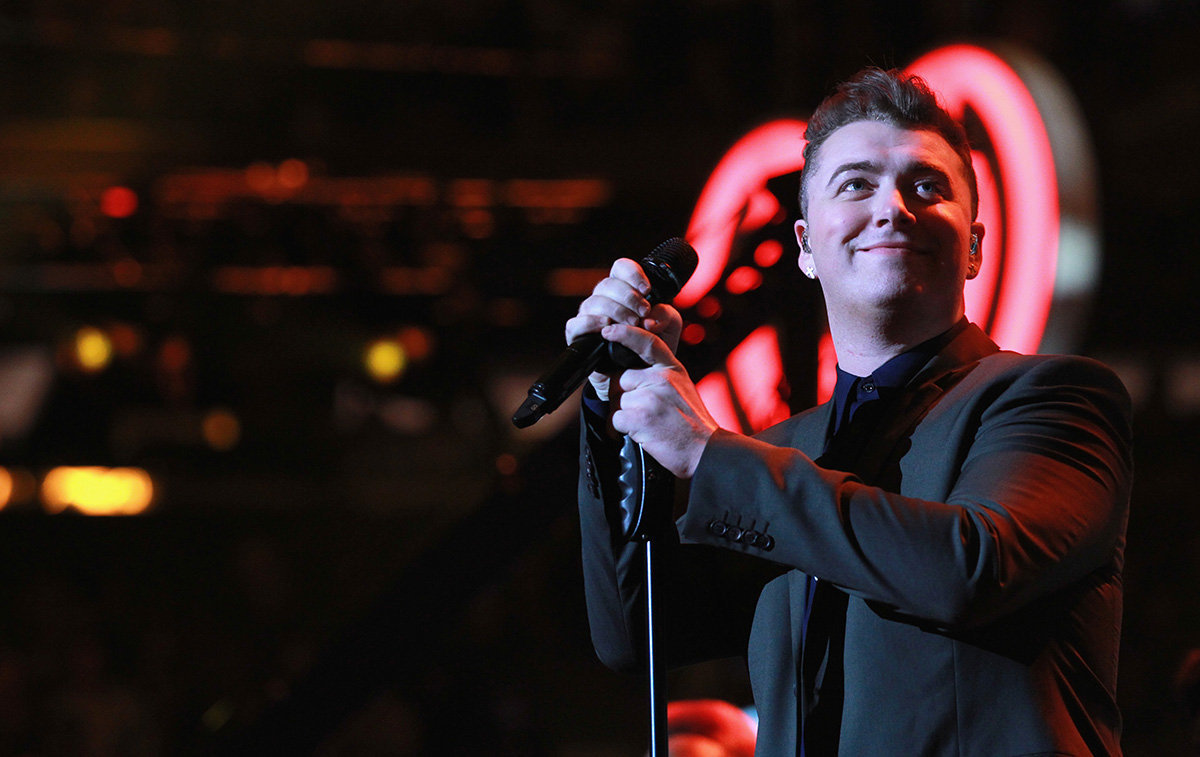 I know Sam Smith is well aware of the Adele comparisons, but there are two reasons why people will never stop doing it. (1) Smith and Adele are both classy, top-flight British vocalists who make mature pop records whose appeal transcends age, gender, and racial demographics; and (2) Smith sort of looks like Adele. I can’t be the only who has noticed this. If you dare to imagine Adele having a baby with Christopher Cross,2 you end up with Sam Smith. This is why the Grammy-winning potential is so strong with this one. Sam Smith has a face that makes people want to hand him gold-plated gramophones, because it already feels familiar.

Cross is a fitfully remembered singer-songwriter who made Grammy history in 1981 by winning Album, Record, and Song of the Year, as well as Best New Artist. His music is the epitome of yacht-rock cheese, but this song is still fire.

My bet: $550. I feel super-confident about this pick. Sure, the “I Won’t Back Down” controversy could hobble Smith, but I don’t think it will in this category, especially since Tom Petty has been reliably cool about the whole situation. You could also point out the spotty record for IRL vs. URL winners in this category: In 2013, Mumford & Sons crushed the Internet by defeating Frank Ocean, but in 2014 the Internet struck back when Daft Punk won out over Taylor Swift. But a 1-1 record isn’t enough of a precedent; besides, if the pattern holds, the pendulum should swing back for IRL this year.

URL winner: None of these songs has the social-media juice of Beyoncé’s “Drunk in Love,” though let’s be grateful that the snub will save us from a gajillion “surfboart” jokes on Sunday. Honestly, these nominees don’t seem Internet-y in the slightest. So, let’s do what we do on the Internet and set IRL reality aside for a moment. Did you know that Migos’s “Versace” was released on the very first day of eligibility for this year’s Grammys?3 It’s true. Surely this is enough to start a “Migos is better than the Grammys” meme. (I’m not suggesting that this happen. I’m just pointing it out as a possibility.)

IRL winner: Let’s figure this out by process of elimination. A rap song has never won in this category, and I don’t expect that will change with Iggy Azalea or Meghan Trainor, or else the Fight Club scenario I described earlier ceases to be a joke in a Beyoncé context and becomes deadly real in a “Macklemore suddenly looks like Afrika Bambaataa in comparison” context. However, I’m willing to bet that the Grammys’ historical aversion to rap ultimately outweighs any impulse for Ed Norton–level recklessness.

I think Smith had a better shot before he relinquished points on “Stay With Me” to Petty and Jeff Lynne. The Grammys desperately want to appear hip, and Smith’s biggest song is now two-fifths of a Traveling Wilburys reunion track. So he’s out.

My bet: $350. I have a terrible record at picking Grammy winners, so maybe my self-assurance here is misplaced. But I feel really good about this pick. Just consider the optics at play here: Taylor Swift was primarily responsible for keeping the record industry afloat in 2014. She is pop’s most valuable asset, and it would be smart to hand her some hardware lest she consider going where the real action is: video games. (I’m just saying: “Blank Space” could just as easily be a first-person shooter called Starbucks Lovers.4 DON’T PUSH TAYLOR AWAY, GRAMMYS.)

Yes, I realize the lyric is really “long list of ex-lovers,” but we all know that it sounds like “Starbucks lovers,” and thus it shall forever be.

Besides, if you give the trophy to Sia, who’s going to accept it? A friggin’ mime? Forget that noise. 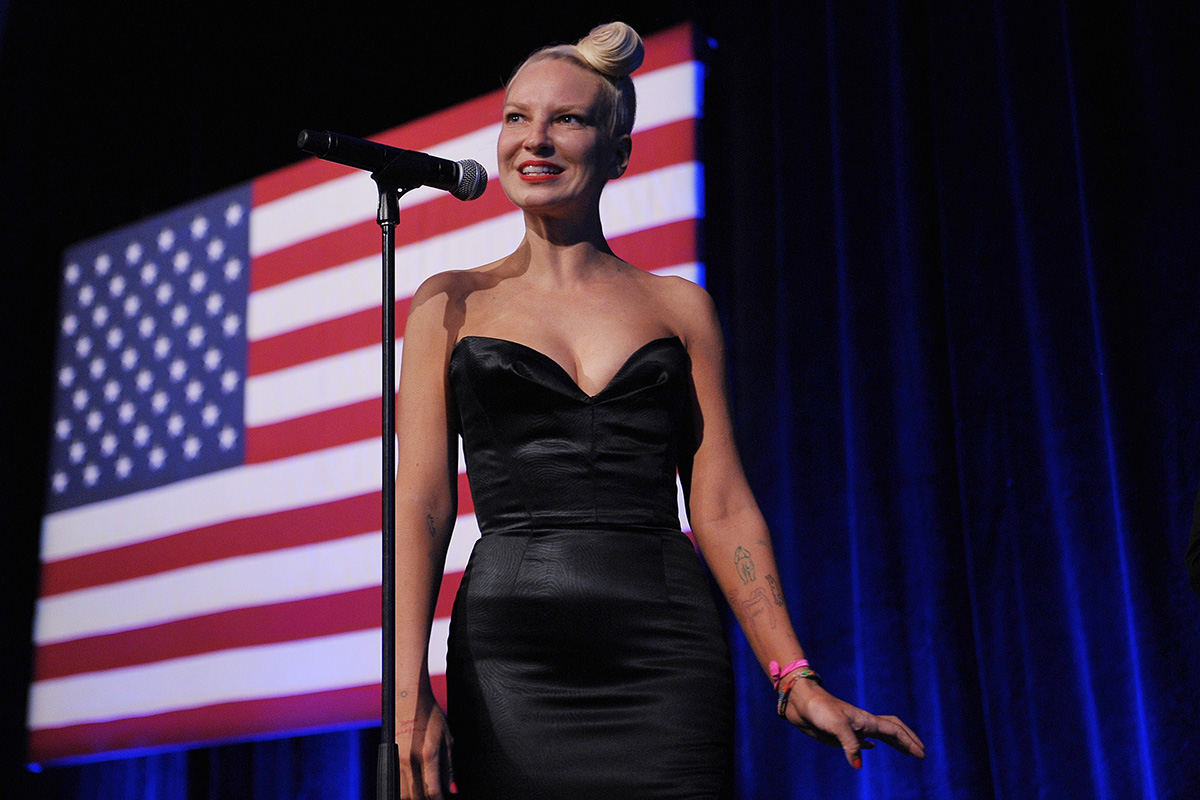 The nominees: “All About That Bass”
“Chandelier”
“Shake It Off”
“Stay With Me”
Hozier, “Take Me to Church”

URL winner: With Song of the Year, it’s never about who wins so much as forgetting what distinguishes this category from Record of the Year. This is an award for songwriters, whereas Record of the Year is for recording artists. The only track not nominated in both categories is “Fancy,” which will hopefully compel Azalea to tweet something ill advised and borderline racist during the ceremony. (May I suggest that this occur during the Jessie J–Tom Jones performance? I suspect the world will really need a distraction right about then.)

IRL winner: Replacing “Fancy” among the Song of the Year nominees is “Take Me to Church,” which benefits from “I Just Heard the Greatest Song of My Life” syndrome. This is the kind of song that tricks you into believing upon first hearing that it is the best tune ever written. These songs follow a formula: They start off quiet and build to grandiose, vaguely spiritual-sounding choruses. They always end strong, whether it’s with an incredible guitar solo, a beautiful gospel choir, or a 75-piece orchestra. And the lyrics ponder the mysteries of life in a way that initially seems profound but starts to seem overly simplistic after a few more listens. Add all of the pieces together and you wind up with an emotionally overpowering experience that temporarily impairs all mental activity.

My bet: $100. I feel good about this pick, but not as good as I do about my other picks. Whoever loses between “Shake It Off” and “Chandelier” could easily win this category, or one of them could sweep. It all hinges on whether the voters believe “I’ll worship like a dog at the shrine of your lies” to be poetry or nonsense. “Poetry or nonsense?” is where the Grammys live and breathe.